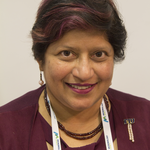 A native of Malaysia, Dr. Mathee is a dedicated and demanding teacher who has received high praise from her students. She received BSc (Genetics) and M Sc (Microbial Genetics of Neisseria gonorrheae) degrees from the University of Malaya and went on to complete her Ph.D. in Molecular Microbiology at the University of Tennessee, Memphis under the tutelage of Martha M. Howe. She did her postdoctoral training at Tufts University in Boston on Helicobacter pylori pathogenesis. Subsequently, she joined Dennis Ohman at the University of Tennessee-Memphis, where she honed her expertise on Pseudomonas aeruginosa and cystic fibrosis (CF). Her interest in biofilm led her to spend time in Copenhagen, working with Niels Hoiby and Soren Molin on various aspects of the infections that ultimately lead to pulmonary failure in CF patients. In 1999, she joined the Department of Biological Sciences at FIU as an Assistant Professor of Pathogenic Microbiology. In 2007, she joined the newly formed Herbert Wertheim College of Medicine as the first founding faculty member and founding chairman of the Department of Molecular Microbiology and Infectious Diseases. In 2010 she was promoted to a full professor. She received her MPH on Health Policy and Management from FIU in 2018. She founded the Global Health Conference (previously called International Conference on Tropical Medicine) in 2011. She also founded the Global Health Consortium in 2014 and served as the founding director until 2016.

Prof. Mathee has established a multi-faceted research program focused on molecular pathogenesis in the model organism Pseudomonas aeruginosa that is responsible for the high morbidity and mortality in CF patients. She is very passionate about her research and how it might contribute to increasing cystic fibrosis patients' quality of life. She is well-respected nationally and internationally by researchers in multiple fields, including Pseudomonas aeruginosa pathogenesis, microbiomics (soil, lung, and gut), alternate therapy using botanicals, microbial biofilm development, regulation of prokaryotic transcription, phage molecular biology, forensic microbiology, and bioinformatics. She has published more than 100 articles and several book chapters in the fields of molecular microbiology, forensic science, microbiome, and bioinformatics - many of which are recognized as seminal and have been selected for journal highlights. Her 2008 paper in Proceedings of National Academy of Sciences was selected by the Faculty of 1000 Biology members, a much-coveted honor.

In 2011, Prof. Mathee received the Mentor of the year award for her commitment to the success of her 150+ mentees, almost all of them have become successful in their chosen career. In 2014, she was honored with the Inaugural Inspiration in Science Award by New England BioLabs — The Passions in Science Award through the nomination of her mentees. In 2011, she was bestowed the highest honor of her career in FIU, the President's Council Worlds Ahead Faculty Award in recognition of outstanding achievement as a student-centered professor who makes an impact and exceeds expectations. In 2020, she was elected to the American Academy of Microbiology.