In the United States, 2.7 to 3.9 million patients are infected with the hepatitis C virus (HCV) with 3,500 new cases reported yearly. According to the Centers for Disease Control and Prevention, HCV was the underlying or contributing cause of death of 19,659 patients in 2014. These facts underscore the need for a better understanding of the scope of this disease. Our epidemiologic study aimed at analyzing the pattern of occurrence of HCV infection at Staten Island University Hospital (SIUH) by evaluating the characteristics of newly infected patients with hepatitis C in 2014. The identified features served to better distinguish the targets for preventive health care in our particular population.

A cross-sectional study of all newly diagnosed patients with HCV infections in the year 2014 presenting to SIUH was conducted using International Classification of Disease-9 codes (ICD-9) for hepatitis C. We included all patients with a positive HCV antibody confirmed by polymerase chain reaction testing. Patients were divided into groups according to age to simulate the age groups in the 2013 - 2014 Hepatitis B and C Annual Report of the New York City (NYC) Department of Health and Mental Hygiene published in 2016 (abbreviated to 2014 NYCDOH Report, hereafter). Gender and HCV genotypes were also collected. We compared disease frequency between age groups, gender, and genotype with the results of the 2014 NYCDOH Report.

Hepatitis C is a prevalent disease affecting around 130 to 150 million patients worldwide [1]. In the United States (US), estimates of patients having chronic hepatitis C range between 2.7 and 3.9 million [2]. Hepatitis C is associated with significant morbidity and mortality and is the most common indication for liver transplantation in the US. It has a wide range of clinical presentations, including chronic hepatitis, liver cirrhosis, and liver failure, in addition to a higher risk for hepatocellular carcinoma. Patients with hepatitis C have a 37% increased risk of death, mainly attributed to complications of decompensated liver cirrhosis or progression to hepatocellular carcinoma [3].

Multiple factors affect the rate of deterioration of liver disease in patients with hepatitis C. These factors include the age at which the infection was acquired, gender, hepatitis C virus (HCV) genotype, simultaneous infection with hepatitis B and human immunodeficiency virus (HIV) viruses, alcohol abuse, and exposure to hepatotoxic drugs. Identifying the genotype of hepatitis C is crucial in this perspective because, in addition to its ability to forecast the rate of progression of liver disease, it also predicts the response to the new oral antiviral medications and affects the duration of therapy. There are six genotypes of hepatitis C. HCV genotype 1 is the most prevalent in the US, followed by genotypes 2 and 3. Genotype 3 is known to be more resistant to treatment, and patients infected with this genotype are more prone to complications from liver disease. The epidemiology of hepatitis C varies across the US, and the genotype predominance differs between the states and differs according to the demographic characteristics of the affected population. In view of the heavy burden HCV infection confers on the health care system, it is important to know the directions this widespread disease is taking both locally and at the national level. In this study, we looked at the newly diagnosed HCV cases at Staten Island University Hospital (SIUH) from 2013 to 2014, investigated the demographics, and determined the prevalence of different hepatitis C genotypes. Then, we compared our findings to those reported in the 2013 - 2014 Hepatitis B and C Annual Report of the New York City (NYC) Department of Health and Mental Hygiene published in 2016 (abbreviated to 2014 NYCDOH Report, hereafter) aiming to find a trend or pattern that allows for more and better understanding of the disease dynamics and behavior at the local level in the Staten Island borough [4].

We conducted a retrospective longitudinal review of the medical records of patients diagnosed with HCV from 2013 to 2014 at SIUH. Subjects were identified using International Classification of Disease-9 codes for chronic hepatitis C. Only those with positive HCV antibodies confirmed with polymerase chain reaction testing during the study period were enrolled. This study consisted solely of data collection by chart review. A total of 378 patient medical records were reviewed. No direct contact between investigators and patients took place. Thus, informed consent was not required. Investigators collected demographic, medical, and laboratory data from McKesson system electronic health records. The study divided the patients into different age groups for patients aged 0 to 19 years, 20 to 29 years, and so on. The age groups simulate the age groups in the 2014 NYCDOH Report [4]. The gender and the genotypes were also collected. This study looks at the correlation between disease frequency based on gender, genotype frequency, disease frequency based on age groups, genotype frequency in each age group, genotype frequency among male patients versus female patients, genotype frequency in different age groups in the female sex, genotype frequency in different age groups in the male sex, and the mean age of male and female patients with the disease. All gathered data were grouped in one confidential electronic database using REDCap electronic data capture tools (Vanderbilt University, Nashville, TN) and handed to the primary investigator for grouping and primary statistical analysis. The primary outcome of this study was to compare the disease frequency based on gender, genotype, and age groups at SIUH with those reported in the 2014 NYCDOH Report published in 2016 [4].The secondary outcome was to compare the genotype frequency in each age group at SIUH to those reported in the same 2014 NYCDOH Report. 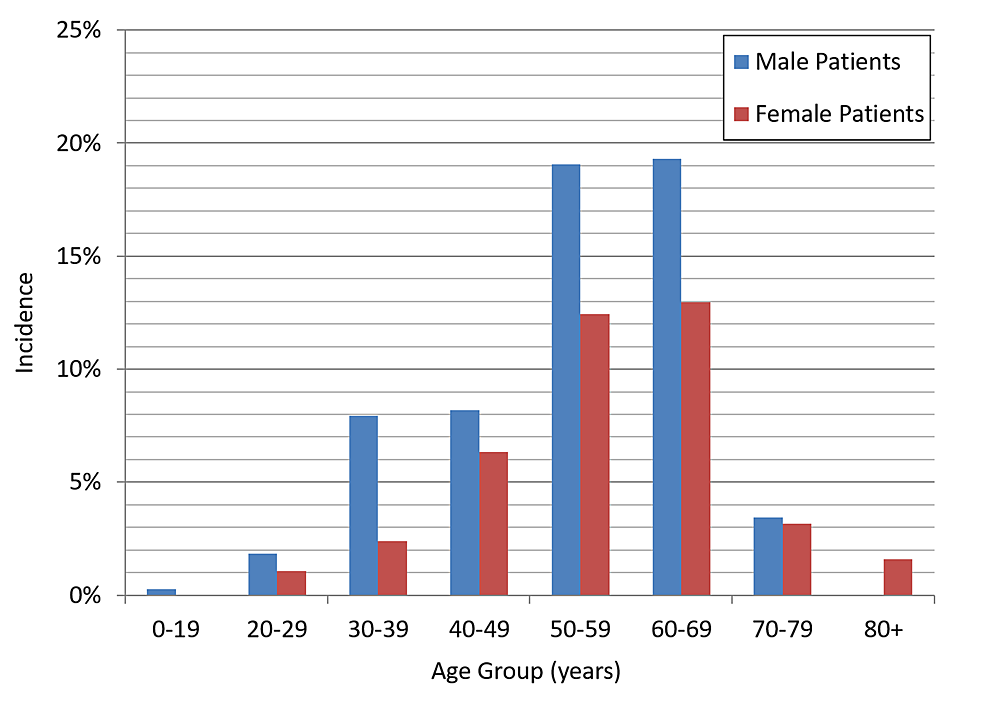 Figure 1: Incidence of HCV cases by sex and age group 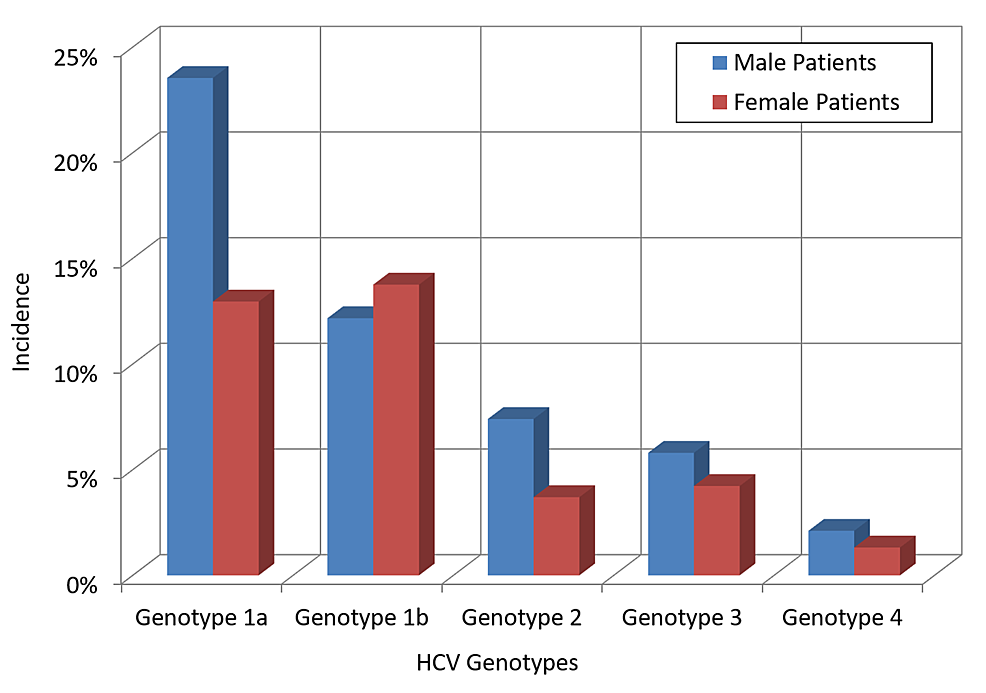 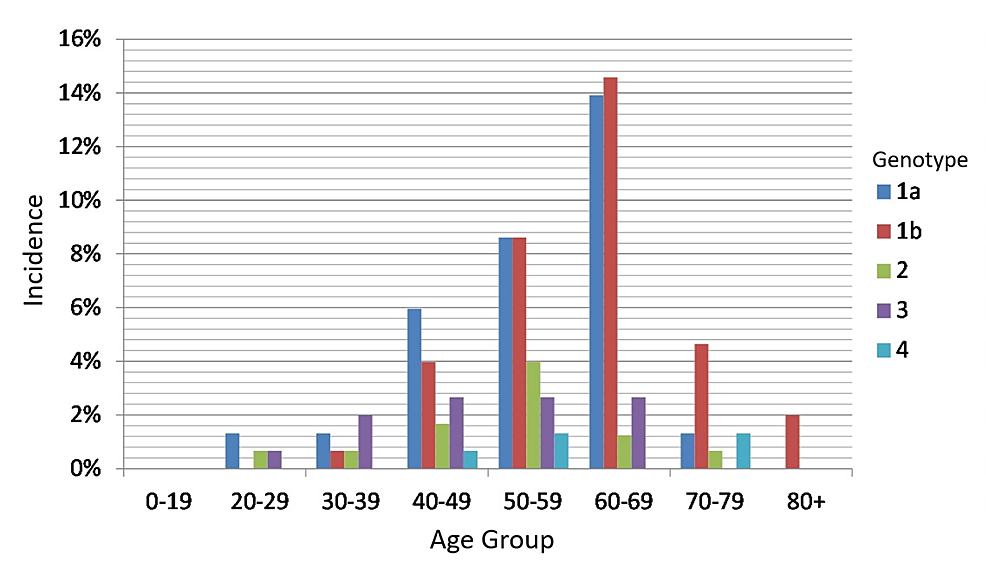 According to the World Health Organization, HCV represents a global health concern with a prevalence rate of about 71 million patients worldwide; of them, 399,000 die each year. Moreover, the chronicity of this disease and high transmission rates pose additional challenges. Early detection and prompt treatment remain crucial to prevent the development of liver cirrhosis and/or hepatocellular carcinoma [5].

Being the most common blood-borne infection in the US, the Centers for Disease Control (CDC) estimated that 2.7 to 3.9 million Americans have chronic hepatitis C, representing 1.3% of the US population and resulting in about 20,000 deaths per year [4]. Although the HCV mortality rate exceeds HIV mortality [6], the resources devoted to HIV surveillance and treatment surpass those dedicated to HCV. Other reports suggested a prevalence rate of 5.2, higher than what was published by the CDC given that CDC relied on the National Health and Nutrition Examination Survey (NHANES) in estimating the prevalence rate [7]. However, the NHANES survey excluded a considerable number of patients with a high risk of HCV contraction, such as incarcerated individuals, nursing home residents, homeless, hospitalized patients, and individuals on active military duty [8].

In a 2012 study, it was projected that 75% of the HCV patient population were born from 1945 to 1965 [9], and hence, the mandated screening measures targeting that population has become a standard measure for health care maintenance since 2014.

In NYC, it was estimated that the prevalence of chronic HCV infection was about 1.8% of the total population aged more than 19 years and excluded the high-risk population, such as prisoners and intravenous drug abusers [10]. On an annual basis, the NYC Department of Health and Mental Hygiene publishes a hepatitis C report. The report contains detailed epidemiologic data about HCV in NYC, which guides the preventive strategies undertaken by the department.

In our study, we aimed to compare our epidemiologic findings of all reported HCV cases in 2014 at SIUH (the largest health care center in Staten Island) with those published in the 2014 NYCDOH Report.

Furthermore, our report showed that no male patients survived after the age of 79, and only female patients represented all the cases above that age, most with genotype 1b. This finding may highlight a mortality difference between men and women with HCV, which was indicated in the 2014 NYCDOH Report with 36.2% mortality in women and 63.8% mortality in men. This key finding supports what Inoue et al. and Bakr et al. suggested in that female patients exhibit a higher HCV clearance rate than male patients [11-12]. More studies are warranted to assess this observed effect and examine its etiological nature.

To a large extent, our epidemiologic data appear to be very consistent with the data reported in the 2014 NYCDOH Report. However, our findings suggest that Staten Island health care facilities should prepare to increase and improve screening strategies in baby boomer patients to shift the main age of diagnosis to the younger age group, thus avoiding a heavy toll of morbidity and mortality. While we do not currently know why only women with HCV survived after the age of 79, our findings add to the very limited data suggesting that women clear the virus more than men.

© Copyright 2018
Mahgoub et al. This is an open access article distributed under the terms of the Creative Commons Attribution License CC-BY 3.0., which permits unrestricted use, distribution, and reproduction in any medium, provided the original author and source are credited.

Figure 1: Incidence of HCV cases by sex and age group