Breast cancer represents the second leading cause of brain metastases in women. Once diagnosed, brain metastases have been associated with a rapidly progressive and universally poor prognosis. Breast cancer patients, particularly those with advantageous disease characteristics, may achieve extended survival. This extended life expectancy highlights the importance of effective intracranial treatments that minimize treatment-related late toxicity.

Breast cancer remains the most commonly diagnosed malignancy and the second leading cause of brain metastasis in women [1-2]. Historically, the presence of brain metastases has been associated with a universally poor prognosis. However, breast cancer patients represent a unique cohort in which factors such as phenotype, performance status, age, and extracranial disease burden may portend an extended survival. As highlighted in the validated disease-specific graded prognostic assessment (DS-GPA), favorable subsets with HER2+/Luminal B breast cancer have a median survival of 25-27 months [3]. This extended life expectancy highlights the importance of effective intracranial treatments that minimize treatment-related late toxicity.

A 53-year-old woman presented with a self-palpated, biopsy-proven, invasive ductal carcinoma (estrogen/progesterone receptor positive, HER-2/neu positive) of the left breast in December 2004. She underwent neoadjuvant docetaxel/cyclophosphamide chemotherapy followed by a total mastectomy and axillary node dissection in May 2005, with pathology demonstrating ypT1N1M0 Stage IIA grade three invasive ductal carcinoma. She was subsequently treated with anastrozole and trastuzumab until three symptomatic brain metastases were discovered in June 2006. No additional distant metastases were evident. Her systemic therapy from that point included lapatinib and tamoxifen until 2010 and fulvestrant thereafter. 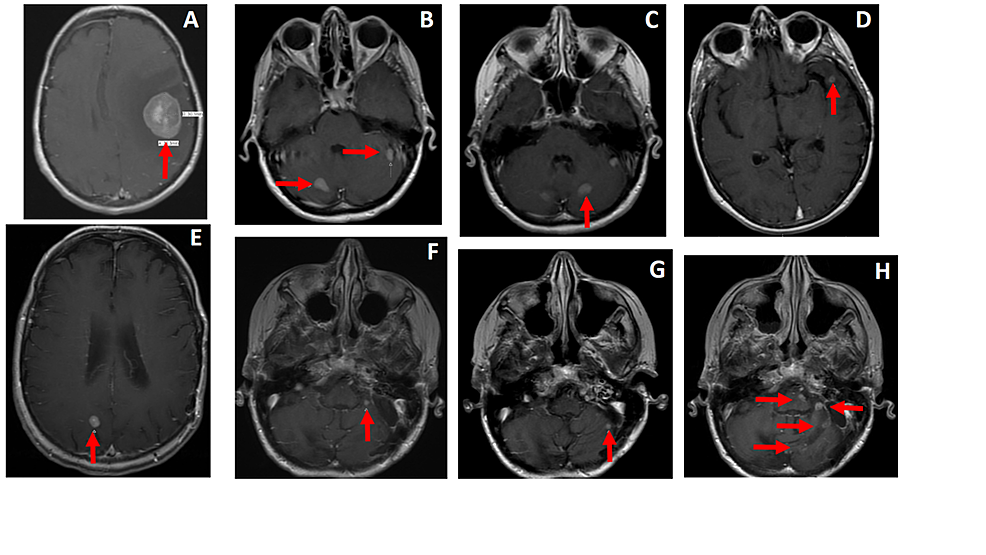 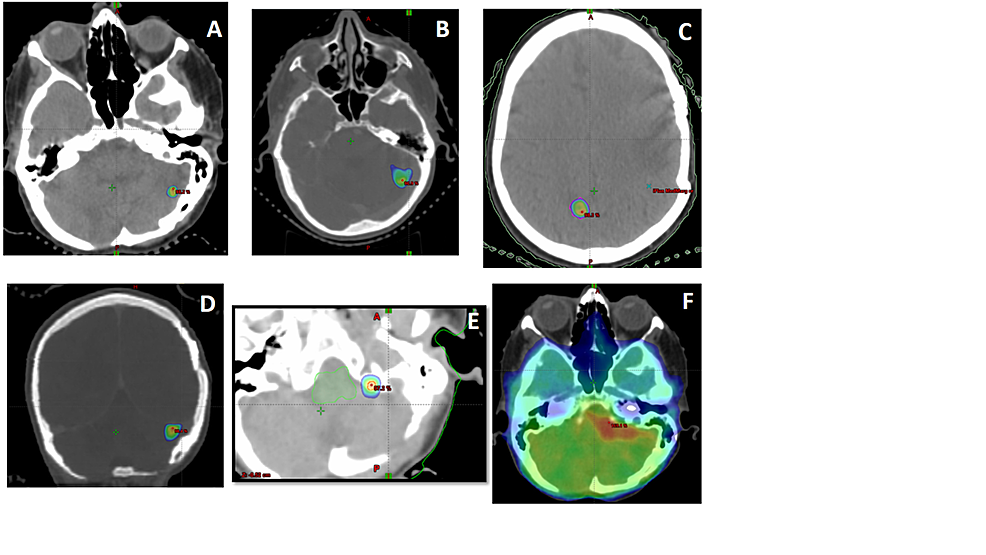 In March 2015, she developed dysarthric speech and an MRI discovered progressive disease in the midbrain and right temporoparietal lobe, as well as enhancement within the posterior fossa, concerning for leptomeningeal disease. She, thus, underwent a 10-fraction course of hippocampal, sparing whole brain radiation therapy. She completed each course of SRS without treatment-related toxicity, a detriment to the quality of life, and remained neurologically intact until her final intracranial progression. Six months after receiving whole brain radiation therapy, she suffered a further progression of the disease and elected to pursue hospice care.

This case underscores the potential durable preservation of quality of life and disease control with the utilization of SRS in the treatment of a limited intracranial tumor burden. The patient underwent 12 SRS courses, targeting 14 lesions over eight years and remained functionally independent until systemic deterioration requiring hospice care. She tolerated each course of SRS without incident until eventually suffering progressive disease requiring WBRT.

Although generally very well-tolerated, the toxicity associated with SRS may include edema, seizures, and radionecrosis. RTOG 90-05 demonstrated an increased rate of neurotoxicity with increasing tumor diameter, likely secondary to increased normal tissue dose [6]. This, in combination with the single-institution series, suggests that tumor volume, rather than the number of metastases, may serve as a better gauge of the outcome when considering SRS over WBRT [7]. The paradigm of volume rather than the number of metastases is well highlighted in the presented case, with each new presentation of an intracranial disease being of limited volume and, thus, requiring minimal normal brain tissue treatment, likely contributing to the overall exceptional outcome [8]. The total cumulative volume of disease/cavity treated by the prescription dose was 14.3 cc, yielding a low volume of normal brain tissue receiving greater than 12Gy.

GK SRS has long been a gold standard for intracranial SRS, and linear accelerator-based systems have since made significant progress. This patient received treatment via GK-SRS as well as the CyberKnife and TrueBeam platforms. Population studies demonstrate that the use of Linac-based SRS is more frequent in community settings when a cancer facility is less than 20 miles away [9]. No consistent differences in clinical efficacy have been reported between SRS platforms to date. Comparative studies have reported the shortest beam-on time with TrueBeam, and the lowest peripheral normal brain tissue dose with GK-SRS [10]. This may provide a theoretical benefit in the safety of treatment delivery and normal tissue dose. This study includes a single patient experience of each major treatment platform (GK-SRS, CKRS, and TrueBeam STX with BrainLAB), each demonstrating an excellent long-term outcome.

This patient exemplifies the excellent long-term outcome possible with SRS treatment of metastatic breast cancer. As the efficacy of systemic therapy continues to improve, the importance of SRS in the management of brain metastases will continue to grow. Currently, SRS provides efficient, effective, and less-toxic treatment of intracranial disease to promote the most desirable, long-term outcome. On-going trials will reveal the added efficacy and safety of SRS alongside systemic agents with the penetration of the blood-brain barrier.

© Copyright 2017
Kalash et al. This is an open access article distributed under the terms of the Creative Commons Attribution License CC-BY 3.0., which permits unrestricted use, distribution, and reproduction in any medium, provided the original author and source are credited.