The coronavirus disease-2019 (COVID-19) pandemic is exacerbating the worldwide healthcare crisis. The pandemic has had an impact on nearly every system of our body. The Food and Drug Administration (FDA) gave immediate authorization of several vaccines to avoid critical COVID-19 outcomes following the rapid spread of the COVID-19. There have only been a few cases of severe acute respiratory syndrome coronavirus 2 (SARS-CoV-2) vaccination-induced immune thrombocytopenia (ITP) so far. There should be enough information to identify whether some vaccination adverse effects, such as ITP, are caused by the vaccine. This study aims to determine how common ITP occurs after receiving the SARS-CoV-2 vaccine, as well as gender, age, symptoms, biomarkers, predicted outcomes, and sequelae. We looked at a number of research and compiled the best evidence of SARS-CoV-2 vaccine-induced thrombocytopenia currently available. To find the recommended reporting items, the search technique included keywords like "Immune thrombocytopenia," "COVID-19," "SARS-CoV-2," and “Vaccination.” The search results were grouped using Boolean operators ("OR," "AND").

In December 2019, the first instance of coronavirus disease-2019 (COVID-19) was detected in Wuhan, China. It has a larger prevalence, a longer incubation time, and the ability to spread asymptomatically, on the other hand. As of April 8, 2022, COVID-19 had been documented in 494,587,638 cases over the world, with 6,170,283 deaths [1]. Worldwide, healthcare systems are accelerating vaccination efforts to protect the public from the severe acute respiratory syndrome coronavirus 2 (SARS-CoV-2) virus. Many modest and temporary adverse effects have been reported following the administration of several SARS-CoV-2 vaccines around the world. Thrombocytopenia is a probable side effect of SARS-CoV-2 vaccination, which may limit vaccine use due to a lack of pathophysiologic evidence. ITP is a type of acquired hemorrhagic disease marked by a platelet count of less than 100 × 109/L as a result of immune-mediated platelet breakdown, reduced generation, or increased splenic sequestration [2]. The majority of instances of ITP are idiopathic, with just a few cases recorded as a result of many other triggering events such as immunizations, drugs, or infections. The Winton Centre for Risk and Evidence Communication at the University of Cambridge evaluated the benefits and side effects of the SARS-CoV-2 vaccine and discovered that the risk of clotting is roughly 1:250,000 in the general population, though it is 1.1:100,000 in young persons (20-29 years old) [3].

According to the German Society of Thrombosis and Haemostasis, 31 occurrences of sinusitis or cerebral vein thrombosis were reported to the Paul Ehrlich Institute out of about 2.2 million AstraZeneca COVID-19 vaccine doses distributed. The thromboses appeared 4-16 days following COVID-19 vaccine inoculation, and 19 people had thrombocytopenia, with nine people dying as a result of the clinical course. The patients ranged in age from 20 to 63 years, with two men aged 36-57 years [4]. In four instances, antibodies activated platelets via the Fc receptor, demonstrating a striking resemblance to heparin-induced thrombocytopenia [4].

In this current study, we looked at the current situation of SARS-CoV-2 vaccine-induced immune thrombocytopenia (ITP) and its possible pathogenesis, symptoms, biomarkers, repercussions, and recovery rate. The objective of this research is to learn as much as possible about the epidemiology and symptoms of COVID-19 vaccine-induced ITP.

We looked at case reports and case series that indicated ITP after COVID-19 immunization, independent of vaccine type, and we ruled out any other COVID-19 vaccine-related adverse events that had been published online. We discovered 20 studies that fulfilled our criteria, including 70 cases of ITP following COVID-19 vaccination [5-24] (Table 1).

Table 1: Case reports and case series that were used as references in this investigation.

With the help of Google and scholarly resources like Google Scholar and PubMed, a comprehensive search of COVID-19 vaccine-related ITP case reports were carried out. Keywords like "Immune thrombocytopenia," "COVID-19," "SARS-CoV-2," and "Vaccination" are used in the search to locate items that should be reported. Boolean operators were used to group the search results ("OR," "AND").

The data was extracted individually by the authors using standardized data extraction forms. On an Excel sheet (Microsoft Corporation, Redmond, WA), we collected age, sex, and other variables such as type of vaccination, clinical manifestations, how long since they were detected with ITP, possible outcome, laboratory investigations, diagnosis strategies, and findings, and we reviewed all of these parameters.

The typical age of presentation was 50 years in this research of 70 published studies of COVID-19 vaccine-induced ITP (Interquartile range [IQR]: 38.25-61). Males account for 36.7% of reported cases, while females account for 38. (In 10 documented cases, the gender was not specified.) (Figure 1). 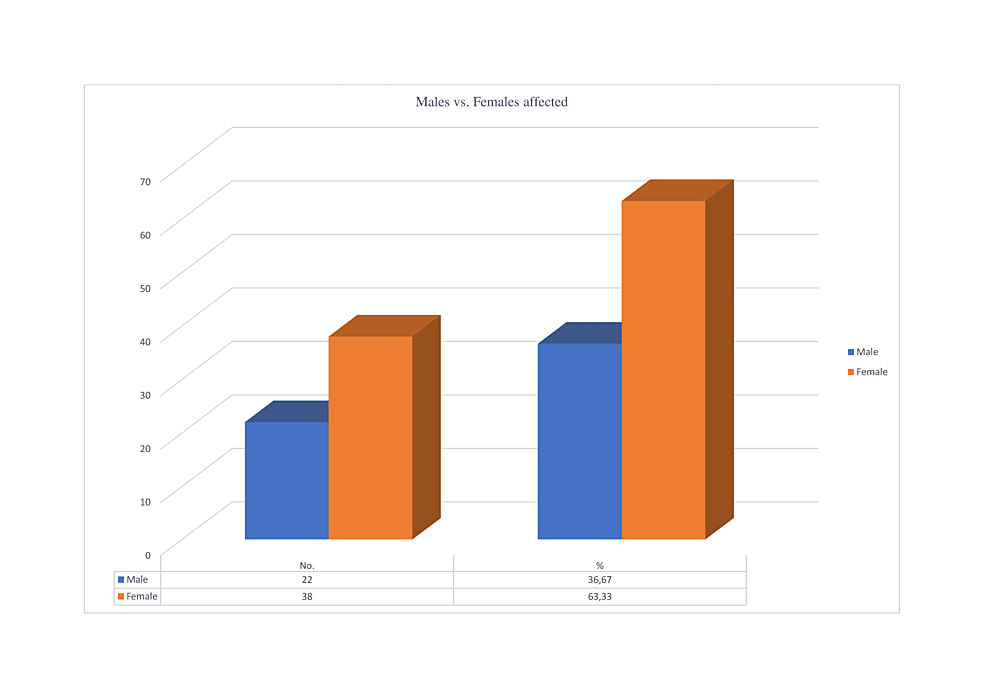 In one family, there was a pre-existing blood disorder, a genetic disorder, and an autoimmune disease. None of the patients had indicated that they were addicted to any known substance of dependency. Details about any comorbidities that were present, such as diabetes, hypertension, hypercholesterolemia, cancer, renal diseases, liver problems, blood disorders, and others, are depicted in Figure 2. 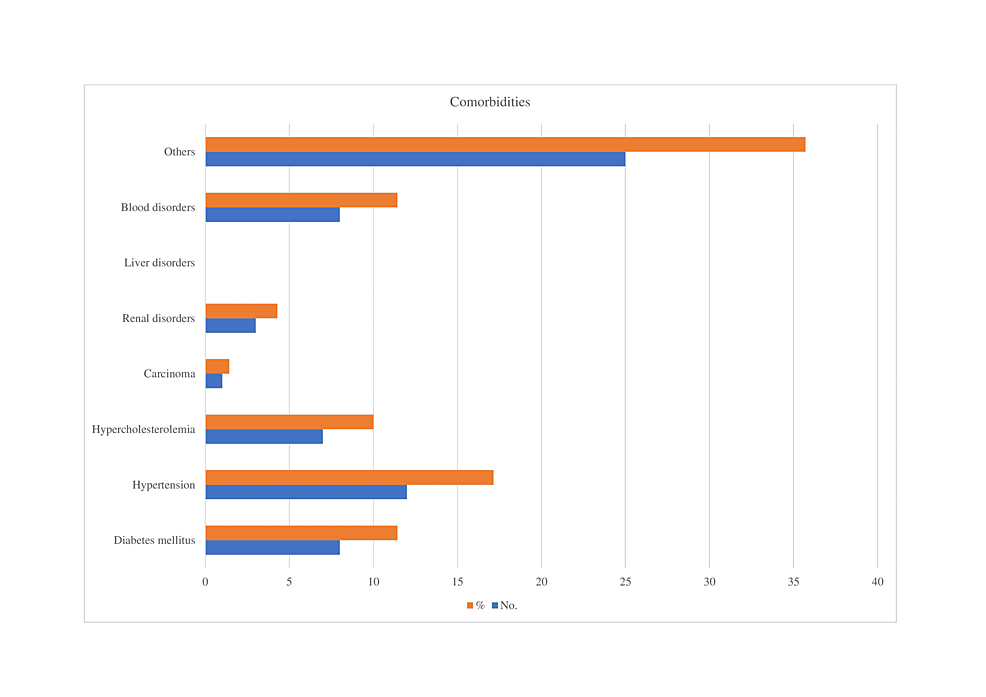 Figure 2: Types of comorbidities associated with the reported patients 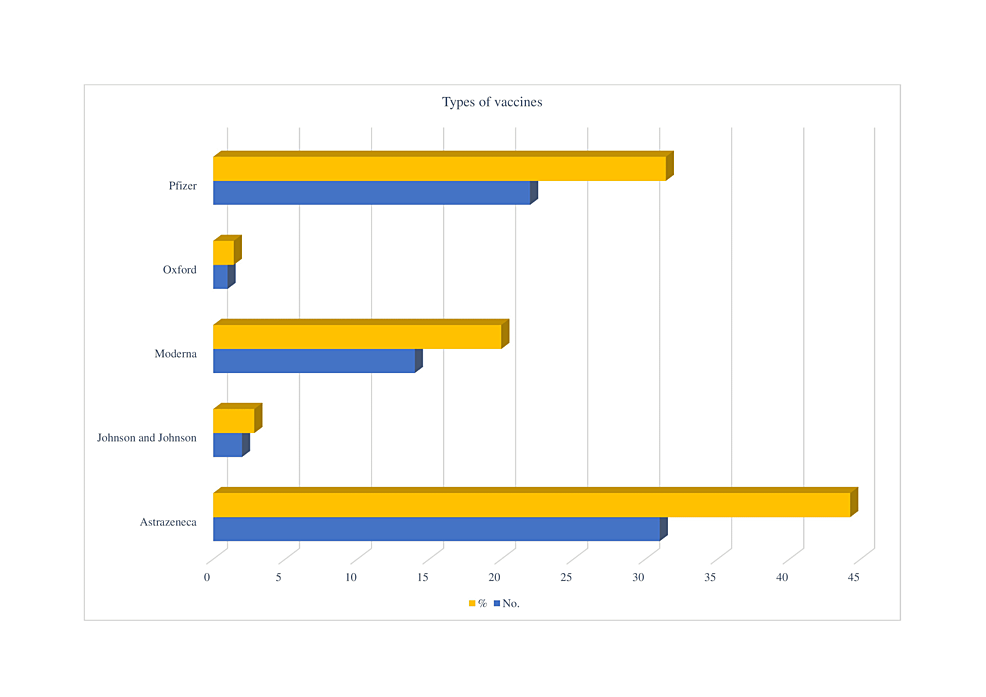 Figure 3: Percentage of immune thrombocytopenia with various types of vaccines

Fever, chills, headache, myalgia, and other symptoms were noted after immunization in our study (Figure 4). 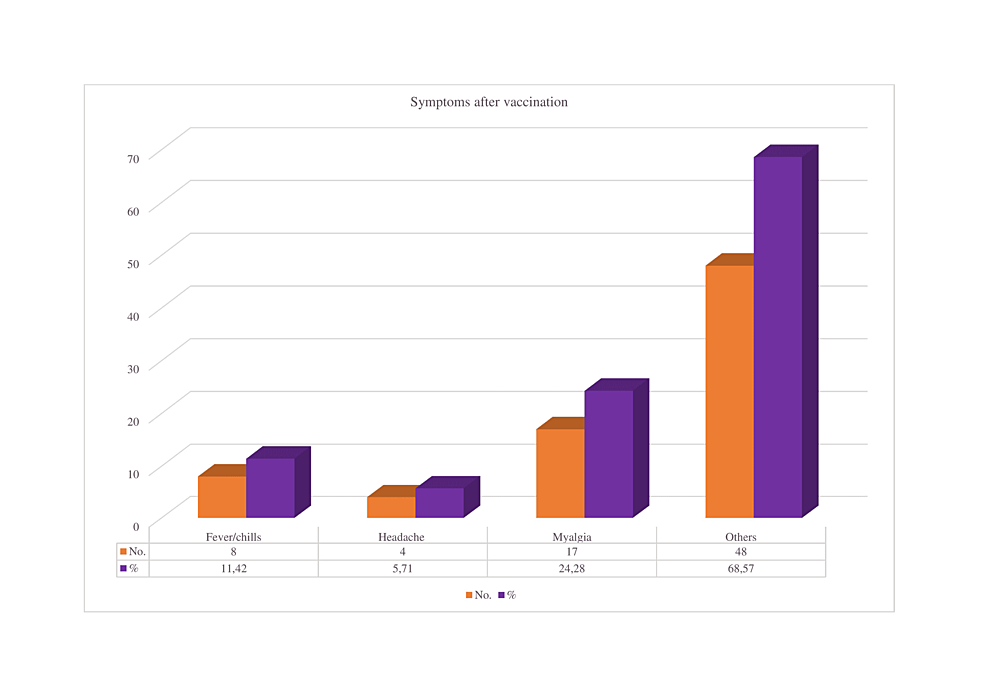 In our review, we found four deaths out of 70 reported instances (5.71% out of total reported cases) (Figure 5). 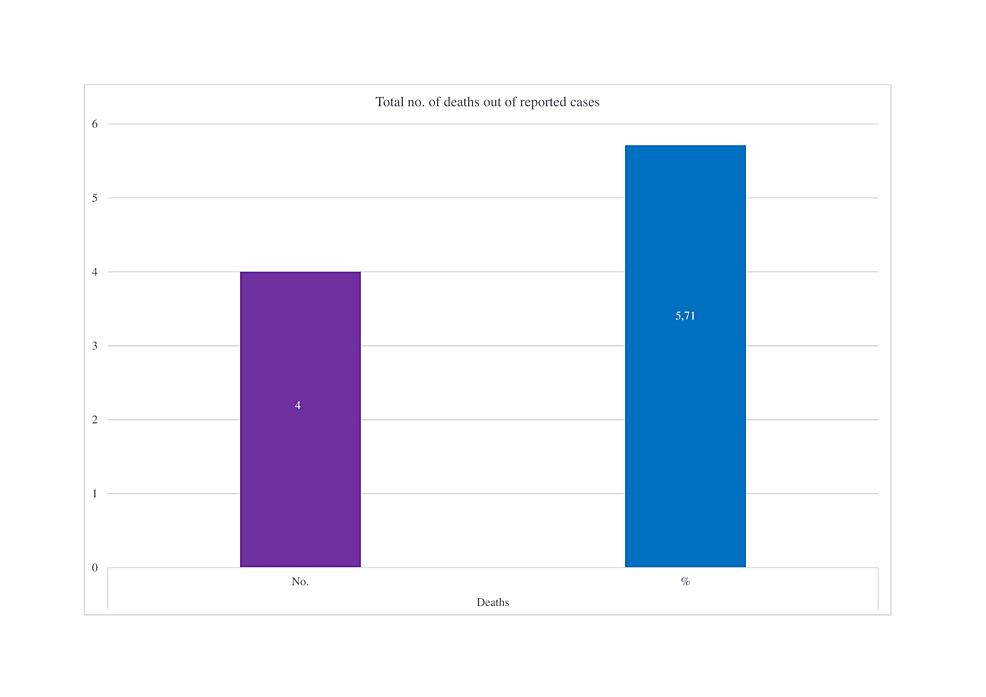 In our investigation, we discovered that the average time interval between the day of immunization against COVID-19 and the onset of illness was five days (IQR: 3-9 days).

Out of 70 patients, we discovered that the PF-4 antibody was synthesized or present in 21 cases (30% of the total patients) (Figure 6). 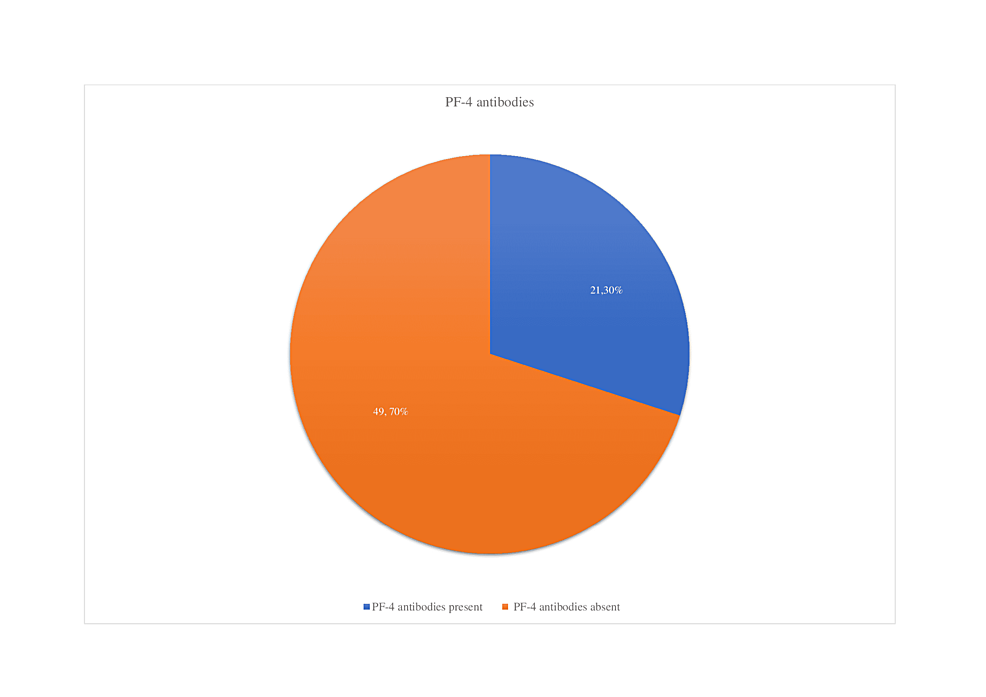 Figure 6: Findings of PF-4 antibodies in the reported cases

In our analysis, we reported that six patients out of 70 had developed complications such as supraventricular tachyarrhythmia and arterial occlusion, accounting for approximately 9% of total cases (Figure 7). 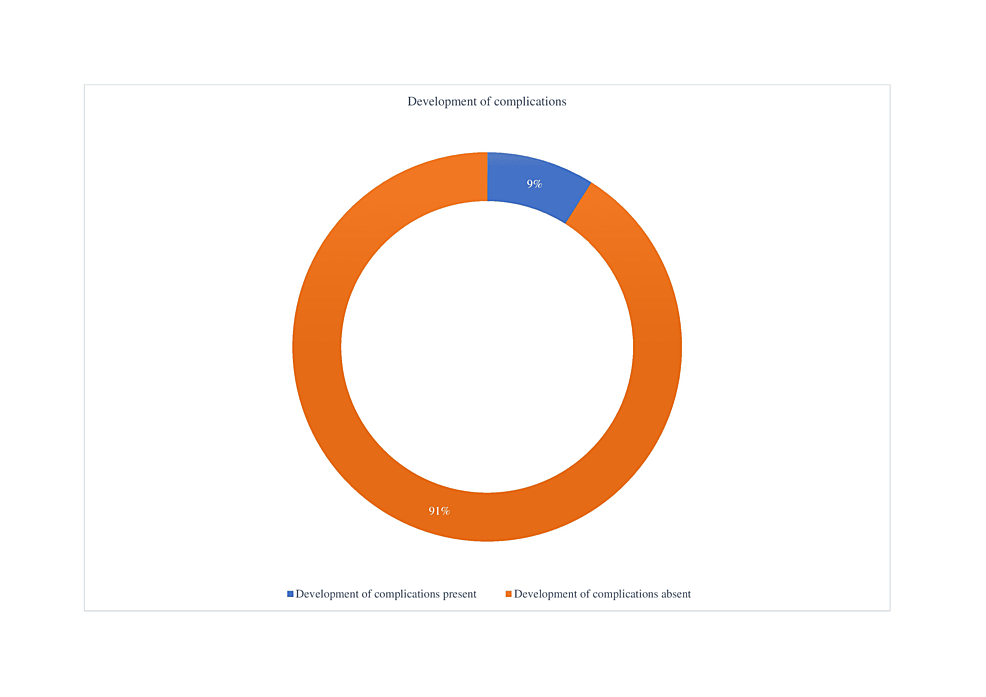 Figure 7: Total no. of patients who developed complications

Since the World Health Organization (WHO) designated COVID-19 a pandemic on March 11, 2020, millions of individuals have been infected all across the world. Secure and dependable preventative vaccines were vital in halting the outbreak, which had major medical, economic, and cultural consequences. COVID-19 vaccine development and immediate usage approval is a big step forward toward disease prevention and minimizing morbidity and mortality.

ITP is a condition in which the immune response destroys platelets by mistake. It can be caused by HIV, hepatitis, or Helicobacter pylori infection in adults. ITP is a condition that affects children after a viral infection such as the mumps or the flu [25].

T-cells, a kind of WBCs, target platelets directly in a limited number of cases. Medication-induced allergies that cross-react with platelets could be the source of this immune system malfunction. Antibodies that cross-react with platelets can be caused by infections - most common viral diseases such as the viruses that cause chicken pox and hepatitis C, also with the immune diseases like rheumatoid arthritis and lupus, lymphomas, and leukemias, and even pregnancy [26].

Researchers have yet to discover the exact relationship between SARS-CoV-2 vaccination and the incidence of thrombocytopenia. Only 17 cases of ITP were detected among the more than 20 million patients in the United States who got dose of the Pfizer and Moderna SARS-CoV-2 vaccinations as of February 2, 2021 [32,33]. According to the estimates, one de novo incidence would occur for every million vaccination recipients, which is consistent with the zero occurrences recorded in the joint Pfizer and Moderna vaccine trials, which included over 70,000 participants [32,33].

Secondary ITP after many types of vaccines produces an unsettling scenario. According to one study, approximately one instance of ITP occurs in approximately 40,000 children who receive the MMR vaccine [34].

Because of a lack of precise pre-vaccination platelet counts and imprecise temporal case reporting, it is currently difficult to assess the true incidence rate of ITP following SARS-CoV-2 immunization. Despite the fact that existing data suggest that the frequency of ITP following SARS-CoV-2 immunization is roughly equivalent to contemporaneous cases after vaccination, this material should be viewed as preliminary.

The present evidence shows that, while it is uncommon, young people without comorbidities are at an increased risk of developing ITP within 3-10 days of receiving the SARS-CoV-2 vaccine (COVID-19 vaccination). Early symptoms in the majority of cases include headaches, vision problems, lethargy, vomiting, shortness of breath, and petechiae. The majority of cases exhibited elevated D-dimer levels, while just a few had PF-4 antibodies. The majority of people experienced mild symptoms, with only a few developing complications, and the fatality rate was extremely low when compared to other idiopathic causes of ITP.

Figure 2: Types of comorbidities associated with the reported patients

Figure 3: Percentage of immune thrombocytopenia with various types of vaccines

Figure 6: Findings of PF-4 antibodies in the reported cases

Figure 7: Total no. of patients who developed complications

Table 1: Case reports and case series that were used as references in this investigation.