Pancreatic divisum is a condition that occurs in 4-14% of the population. Pancreatic divisum occurs in development when the ventral bud and dorsal bud of the pancreas fail to fuse. Patients with this condition are usually asymptomatic, however, 25-38% of these patients experience recurrent pancreatitis that may further progress to chronic pancreatitis. This case is of a 20-year-old female presenting with abdominal pain in the left and right upper quadrants of the abdomen with a significant history of recurrent pancreatitis since the age of seven. The patient was examined with computed tomography (CT), which identified pancreatitis. Further magnetic resonance cholangiopancreatography (MRCP) assisted in the diagnosis of a type III pancreatic divisum, given the remnant of short communication between the dorsal and ventral duct.

A 20-year-old female with significant past medical history of recurrent pancreatitis presented to the emergency department with abdominal pain that was radiating to the back, to the left inferior angle of the scapula. She described it as sharp, stabbing pain of 8/10 on severity scale. She mentioned that she has experienced this type of pain before, but it has been three years since her last episode. She was unable to consume solid foods without “debilitating” nausea, but denied vomiting. The patient mentioned that her first episode of pancreatitis was at the age of seven when she underwent surgery for pancreatic cyst drainage. Family history was also unremarkable. She has an 11 pack year smoking history but denied alcohol intake. Her vitals were as follow: blood pressure of 132/80 mmHg, heart rate of 81 bpm, 94% oxygen saturation, and a temperature of 98.6 F. Patient weighed 247 lbs with a BMI of 36.49. Abdominal examination revealed a large scar in the center of the abdomen with bowel sounds present in all quadrants. Her abdomen was soft, and non-distended but presented with guarding and tenderness, which was especially tender in the left and right upper quadrants radiating to the umbilicus. She had a negative Murphy sign. Her labs were consistent with elevated lipase and amylase. Computed tomography examination conducted in 2010 and 2017 showed evidence of pancreatitis. In the CT study performed in 2017, there was a 10-mm calcification discovered in the head of the pancreas that was not seen in the 2010 study. We suggested magnetic resonance cholangiopancreatography (MRCP) radiological analysis for the patient which displayed a dilated pancreatic head with a maximal diameter of 6-mm. The MRCP findings demonstrated a small amount of fluid between the pancreatic head and proximal descending duodenum, as well as the posterior border of the liver and diaphragm consistent with pancreatitis. The MRCP also showed evidence of a small remnant communication between the dorsal duct (which becomes the main source of drainage in pancreatic divisum) and the ventral duct.

Magnetic resonance cholangiopancreatography or MRCP is a non-invasive radiological study that can visualize the pancreatic ducts without the use of contrast material. MRCP scan is the most sensitive test for pancreatic divisum [2]. In this case, MRCP showed evidence of a type III pancreatic divisum as evidenced by a short communication existing between the dorsal (the most prominent duct) and ventral duct. In addition, MRCP also exhibited dilatations of the dosal duct showing chronic pancreatitis (Figure 1). The dorsal duct as it failed to fuse with the ventral duct, drains directly into the duodenum through the minor papilla. While the ventral duct joins the common bile duct and drains into the duodenum through the major papilla. The dorsal duct functions as a major source of drainage in pancreatic divisum, as shown below (Figure 1). The relatively small diamater of the minor papilla increases the pressure in dorsal pancreatic duct, resulting in obstruction of pancreatic exocrine secretions, ductal distention and recurrent pancreatitis. 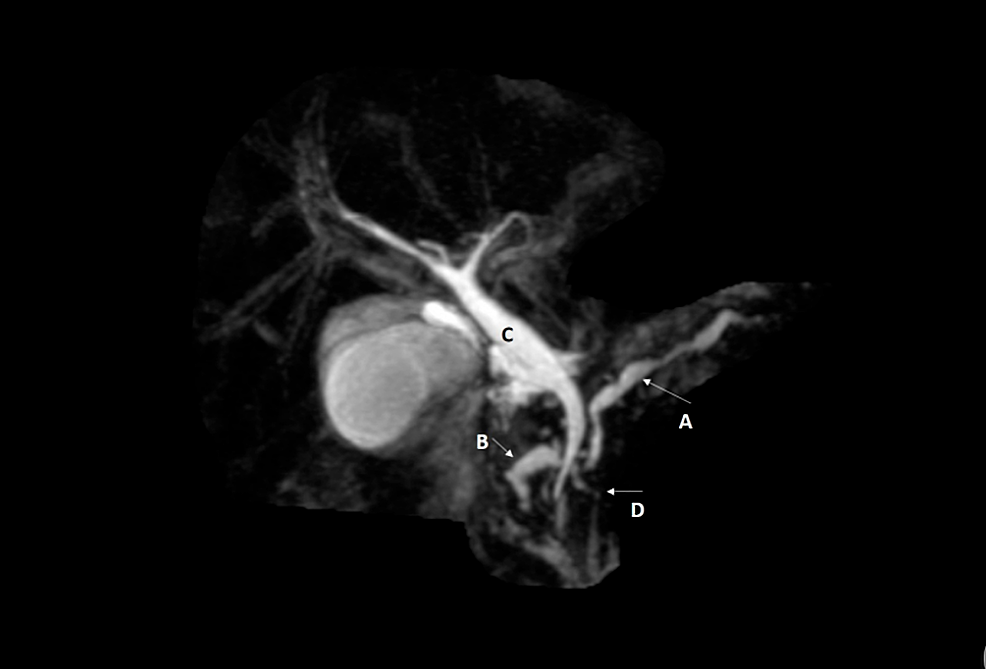 Lastly, detailed review of the patient’s past medical history revealed that each of the past recurrent episodes of pancreatitis were treated conservatively and discharged upon resolution of symptoms. Performance of detailed imaging studies during the patient's initial hospital course may have prevented further complications. Had the patient been assessed for recurrent episodes of pancreatitis with detailed radiological imaging upon initial hospital admissions, it is likely that the congenital defect could have been diagnosed earlier, therefore preventing the chronic deterioration of the pancreas and additional hospital admissions.

In this case report, we attempted to highlight that a young patient presenting with recurrent pancreatitis is suspicious for many pathological processes. Of course, when approaching a patient with these symptoms and confirmed radiological evidence of chronic pancreatitis, it is recommended to rule out cystic fibrosis or alcohol-related causes. However, should these pathologies be negative or not comprehensive in explanation of the patient’s problem, then clinicians should strongly consider the possibility of pancreatic divisum, especially if the family history is negative for recurrent pancreatitis.

Special thanks to Dr. Bharat G. Patel, MD, Radiologist, for his comments on the initial manuscript.

© Copyright 2017
Kuzel et al. This is an open access article distributed under the terms of the Creative Commons Attribution License CC-BY 3.0., which permits unrestricted use, distribution, and reproduction in any medium, provided the original author and source are credited.