Sporadic Creutzfeldt-Jakob disease (CJD) is a rare neurodegenerative disorder, accounting for a majority of the sporadic prion disease burden. This disorder rapidly progresses and is often fatal with no known cure. Initial diagnosis may be delayed due to its varied presentations, which can include psychiatric changes (behavioural and mood variances), visual and auditory hallucinations, cerebellar dysfunction, and pain, occurring in isolation in many cases. Due to the nonspecific complaints, accurate diagnosis can be challenging. CJD exhibits symptoms similar to other neuropsychiatric illnesses; however, only a few reports have been published concerning the association between CJD and alcohol-related illnesses. This case report demonstrates the challenge of diagnosing this disorder early in the clinical course given the variable presentation, especially in a patient with a history of an alcohol use disorder, falls, and cognitive decline.

Sporadic Creutzfeldt-Jakob disease (CJD) is a prion disease that is a group of heterogenous and phenotypically diverse disorders occurring in 1-1.5 cases per 1,000,000 per year worldwide [1]. It is caused by an abnormal accumulation and misfolded prion proteins that lead to neuronal death [2-4]. These neuronal changes lead to a spongiform appearance of the brain, which can be seen in magnetic-resonance imaging (MRI). The misfolded proteins termed PrPsc are resistant to proteases and can facilitate rapid conversion of normal PrP to PrPsc, which leads to active disease progression [2]. CJD is untreatable, as it always results in death. It is generally fatal within a year of symptom onset, with a median duration of five to six months [5,6]. It is possible for any patient suffering from a neuropsychiatric disorder to develop CJD. Therefore, CJD complicated by a neuropsychiatric disorder may be difficult to identify from the disorder itself. We present a rare case of CJD with alcohol use disorder.

A 74-year-old man with a significant history of alcohol use disorder and diabetes mellitus type 2 presented for evaluation of progressive cognitive decline, frequent falls, and tremors, which had been ongoing for about six months. The patient’s family noted progressive cognitive decline starting approximately six months prior to presentation. The family noted he was forgetting and misplacing items, as well as missing important appointments. At the initial presentation, he was fully functional with regards to his instrumental activities of daily living (IADLs) and activities of daily living (ADLs). The patient was noted to have a slow gait, tremors in the upper extremities, and frequent falls, which were attributed to a history of alcohol use, but on further evaluation, the patient was noted to have cut down his drinking to about 4-6 units of alcohol per week. The patient reported that he no longer drove automobiles after he was involved in a motor vehicle accident. His family described the incident as "his leg locked on the gas pedal, causing him to drive on to his front yard, then when backing out, his leg locked again, causing him to crash into a tree." His exam was concerning for cognitive decline, scoring 23/28 on his Kokmen Short Test of Mental Status, with major deficiencies in his short-term memory, calculation, and construction. Eye movements showed a full range of movements with slowed saccades. He had both resting and intentional tremors, mainly affecting the upper extremity more on the left, with rigidity in his upper extremity and bradyphrenia. His gait was unstable, wide-based with decreased arm swing mainly over the left side.

On initial evaluation, his presentation was suggestive of rapid-onset dementia, likely subcortical in nature, for which he was started on a Sinemet (Levodopa + Carbidopa) trial. He was also evaluated for rapidly progressing dementia with brain MRI with and without contrast. The MRI of the brain was done approximately two weeks after the presentation (Figures 1-2), which showed bilateral gyriform high signal intensities (arrow) in the occipital and parietal regions on diffusion-weighted imaging (DWI) and fluid-attenuated inversion recovery (FLAIR) imaging. 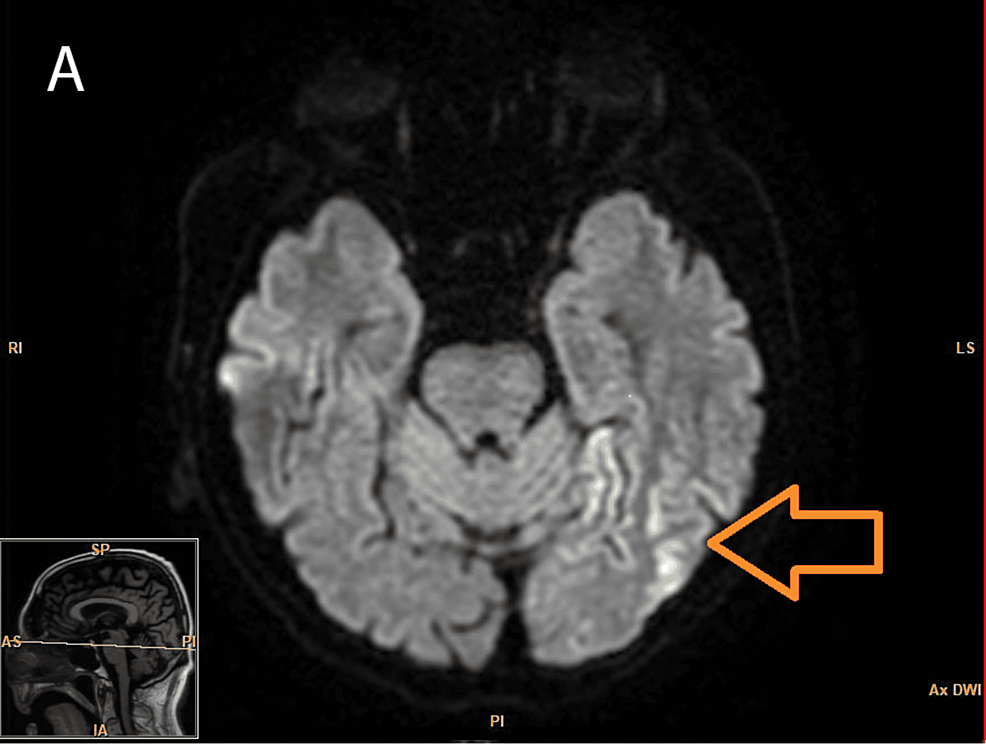 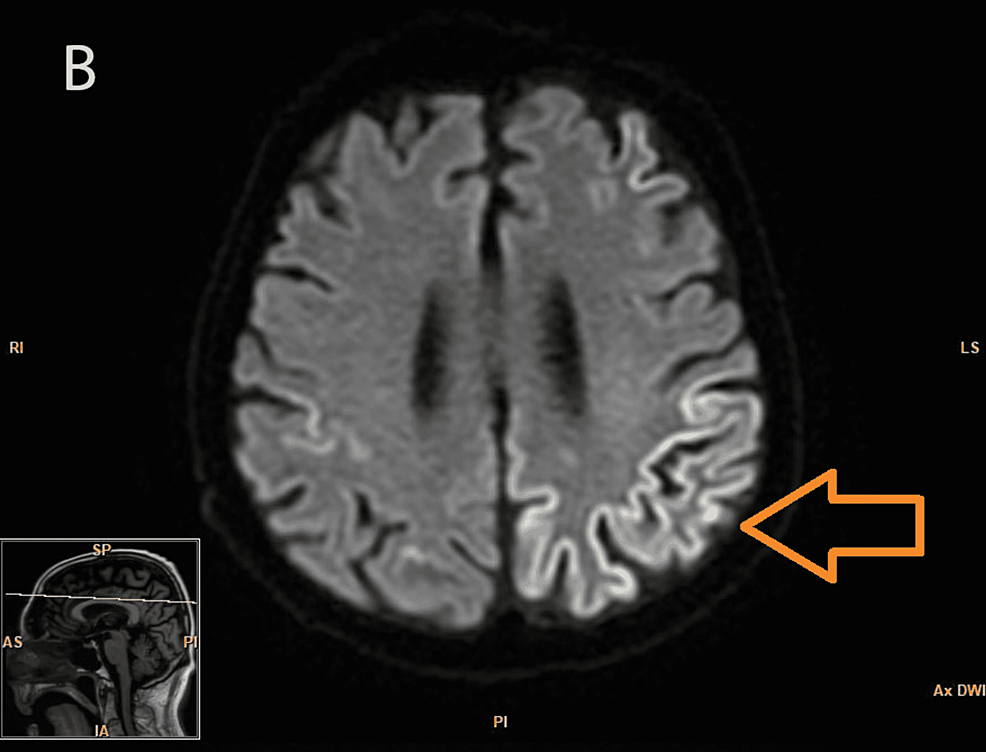 The mean age for the onset of the disease is about 62 years, even though uncommon instances in young adults and people over 80 years of age have been reported [8,9]. Generally, sporadic CJD patients have a very short disease course, lasting only five months or less, although some factors such as age and PRNP genotype can influence the disease course [5]. Alcohol dependence poses a diagnostic problem in the diagnosis of CJD. Only a few reports have been published on the comorbidity of alcohol use disorder and CJD, specifically CJD associated with Wernicke encephalopathy [10], CJD manifesting Wernicke-Korsakoff syndrome [11,12], and also Wernicke encephalopathy manifesting variant CJD [13]. The onset of early CJD symptoms can be challenging to detect. Our patient presented with a slow gait, tremors in the upper limbs, and frequent falls, which were attributed to alcohol use and were interpreted as alcohol-related psychoses and withdrawal. Although these can be attributed to alcohol-related conditions, we cannot convincingly rule out other diagnoses, including CJD, as presented in this report.

The presence of rapidly progressive dementia syndromes, especially those associated with myoclonus, ataxia, or visual disturbances, should raise suspicion of CJD. Other potentially treatable disorders should be excluded (Table 2). CJD is primarily diagnosed by a neuropathologic examination detecting protease-resistant PrPSc (PrPres), which is performed by obtaining a brain biopsy, but sCJD can also be detected noninvasively. A thorough history and neuropsychiatric examination with specific diagnostic tests including EEG, MRI, and tests for CSF protein markers such as RT-QuIC, neuron-specific enolase, T tau protein, and 14-3-3 protein can aid in the premortem diagnosis of sCJD. Restricted diffusion is apparent in at least two cortical regions or is predominant in the caudate nucleus, putamen, and thalamus on MRI in patients with sCJD. MRI generally has better diagnostic accuracy than T tau and 14-3-3 CSF protein testing [1,14,15].

As a protein amplification assay, RT-QuIC is the preferred choice for clinical testing because of its ease of standardization, quicker turnaround time, and lack of infectious byproducts. Inducing pathologic seeding using shaking rather than sonication, amplifies the PrP levels [16]. In addition to cerebrospinal fluid (CSF), olfactory epithelium, skin, ocular tissue, and other types of tissues can be used in RT-QuIC testing [17-20]. RT-QuIC testing was noted to have 92-95% sensitivity and 98.5-100% specificity in a United States sample [21]. CDC diagnostic criteria for sCJD are enumerated in Table 2 [22].

As of now, there are no effective treatments available for human prion diseases [23]. Current care entails supportive treatment [24]. There have been numerous strides in exploring investigational treatments for human prion diseases, and further research is underway. A non-opioid analgesic with a central acting mechanism, flupirtine maleate, is known to have cytoprotective effects in vitro in neurons inoculated with prion protein fragments [25]. A heparin mimetic, pentosan polysulfate (PPS), interferes with the conversion of PrPC to PrPSc, thus altering the disease mechanism [26]. A cultured neuroblastoma cell line (ScN2a) chronically infected with prions was inhibited in its formation of PrPSc by quinacrine and chlorpromazine, particularly derivatives of acridine and phenothiazine [27]. It is also hypothesized that minocycline and doxycycline prevent protein misfolding by the pathologic form of the prion protein in in-vitro and animal models [28]. However, further validation of these treatments needs to be done in the clinical setting.

Sporadic CJD is an uncommon disease that presents with rapid onset dementia and, unfortunately, has a poor prognosis. Its overlapping presentation with other commonly occurring diseases such as Alzheimer's disease, Lewy body dementia, and especially alcohol use disorders, may result in delayed diagnosis. Early signs tend to be non-specific with subjective complaints that can be attributed to alcohol-related psychosis. In such cases, identifying when the symptoms of CJD began can pose a challenge. Hence, a high index of suspicion is necessary. Fortunately, advances in immunological and biochemical testing now allow for less invasive diagnostic testing of CJD with reasonable certainty as compared to the gold standard testing with brain biopsy. Furthermore, despite CJD being a rare entity, it can be a reasonable differential when diagnosing alcohol use disorders. Our case serves to add value to this rare diagnostic dilemma of CJD and alcohol use disorder.

Abraham Joseph and Hisham Mushtaq contributed equally to the work and should be considered co-first authors.

© Copyright 2022
Joseph et al. This is an open access article distributed under the terms of the Creative Commons Attribution License CC-BY 4.0., which permits unrestricted use, distribution, and reproduction in any medium, provided the original author and source are credited.