There is heterogeneity in the literature regarding the anatomy, exact location, and definition of the intersesamoid ligament (IL). Anatomic knowledge of the IL and its variations are important for surgeons who undertake corrective surgery for hallux abducto valgus (HAV). The IL was dissected in 16 feet from 32 formalin-fixed cadavers (12 females, four males; mean age at death, 76.6 years) to examine its morphology. The length, width, and thickness of its constituent bands were recorded with a digital caliper. Descriptive and correlational statistics were used to investigate the relationships between band size, age at death, and sex. A literature review was conducted to compare our data to those of previous studies. Results suggest that the size of the sesamoids may change as a result of HAV deforming forces, which may cause lengthening of the IL. The IL stabilizes the sesamoid apparatus of the first metatarsophalangeal joint (MPJ) and should be evaluated in HAV correction. Anatomic knowledge of the complex morphology and relations between the IL and sesamoids is critically important for surgeons correcting HAV deformities.

The intersesamoid ligament (IL) of the first metatarsophalangeal joint (MPJ) is an essential structure that bridges both tibial and fibular sesamoids of the hallucal sesamoid complex [1-4]. Hallux abducto valgus (HAV) encompasses sesamoidal deviation, malalignment, and metatarsal rotation, all of which act at the capsuloligamentous structure of the 1st MPJ [2-3, 5-7]. The IL is also a major stabilizer of the base of the proximal phalanx and counters shear forces from about 60% of a person’s body weight [5-6]. These functions suggest that the IL plays a major role in preventing HAV.

There is a current lack in normative cadaveric data that solely pinpoints the dimensions of the IL. Instead, the literature has grouped the majority of the ligamentous structures of the first MPJ as a whole. These data have identified the anatomy of the MPJ, but have yet to describe findings using morphometric and statistical analyses [1-3, 6-7]. There is also an absence of studies correlating the difference in IL length and the prevalence of HAV.

The IL has been anatomically described as a ligamentous structure that connects both medial and lateral sesamoid bones of the first metatarsophalangeal joint [9]. Additionally, the flexor hallucis longus tendon is juxtaposed to the plantar surface of the intersesamoid ligament [3]. Confusion is apparent in the literature when differentiating between the plantar plate and IL. Some papers refer to the IL as the central portion of the plantar plate [4]. However, the more commonly accepted description is that the IL is more dorsal to the plantar plate [1-3]. It is necessary to conduct studies to distinguish the IL from the other structures in the hallucal sesamoid complex.

HAV causes medial translation of the metatarsal head, which leads to the proposal that although the IL stabilizes the sesamoids, a constant overbearing force may lengthen the IL [6]. The purpose of this cadaveric study was to examine and statistically analyze the morphology of the IL. This study was driven by the paucity of anatomic data on the pathologic changes that affect the IL and sesamoids in patients with HAV. This understanding will foster future research to specifically focus on how clinical implications of HAV can cause a significant length differentiation of the IL. Ultimately, this relationship can create a new tool for correcting HAV in patients.

Thirty-two formalin-fixed feet from 16 cadavers (12 females, four males) were dissected (16 right and left) from both dorsal and plantar aspects to expose the IL. All of the specimens were extracted using blunt and sharp dissecting tools in an effective manner to expose the intersesamoidal ligament. Proper technique involves many steps including dissection from the plantar aspect through the skin, fat, and fascia at the level of the first MPJ. The tendon of flexor hallucis was maintained and moved to the side to expose the plantar plate. Careful dissection through the plantar plate allowed the ligament to be visualized from outside the first MPJ. Following the measurement of all external structures, we then opened the joint capsule to visualize and measure the ligament from within the first MPJ. Length, width, and thickness of IL and sesamoids were measured with a digital caliper (Hawk, Inc., Cleveland, Ohio). Total length and width of each foot were measured. Measurements were compared in non-hallux valgus (HAV) feet and HAV feet. HAV feet were verified by observation. The data was analyzed using Statistical Package for the Social Sciences (SPSS Version 20.0, IBM, Armonk, NY). Descriptive and correlational statistics were used. A P-value of less than 0.05 was considered significant. Histology was performed on certain specimens to verify ligamentous structures. Digital radiographs of the cadaveric HAV feet were taken using a model 715 A-BD x-ray unit (X-CEL X-ray, Inc., Crystal Lake, IL). 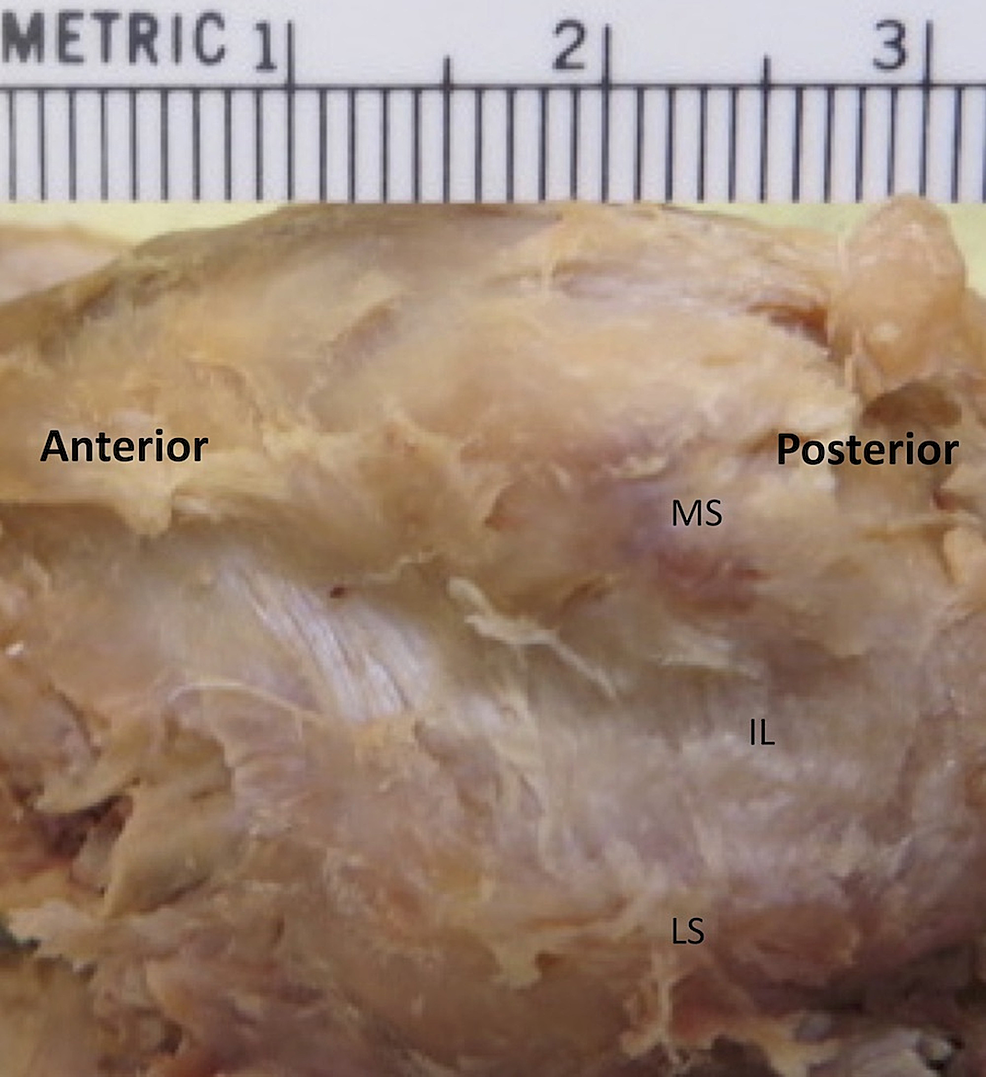 Figure 1: Image of a cadaveric right foot highlighting fibers of the intersesamoid ligament from a plantar view

Currently, surgical correction usually involves transection of the IL to allow removal of the lateral sesamoid in severe deformities. The length and width of the IL is the key factor in determining the distance between the sesamoid bones, and our results suggest that the size of the sesamoids may change as a result of HAV, causing lengthening of the IL. Further studies are needed to better understand the role of the IL and sesamoids in HAV deformity utilizing a larger sample size. Anatomic knowledge of the complex morphology and relations between the IL and sesamoids is critical for surgeons correcting HAV deformities due to the deviation of the sesamoid complex, and the resultant pathologic changes.

The authors thank Ms. Linda Chusuei for helping with the figures. Most importantly, the authors graciously thank the persons who donated their bodies for the advancement of medical education and research.

© Copyright 2017
Fiacco et al. This is an open access article distributed under the terms of the Creative Commons Attribution License CC-BY 3.0., which permits unrestricted use, distribution, and reproduction in any medium, provided the original author and source are credited.

Figure 1: Image of a cadaveric right foot highlighting fibers of the intersesamoid ligament from a plantar view