The lumbosacral trunk, typically comprised of part of the fourth lumbar ventral rami and the entirety of the fifth lumbar ventral rami, serves as a connection between the lumbar and sacral plexuses. Developmental differences underlie the variable relative contributions of L4 and L5 to the lumbosacral trunk. Herein, we report a rare case in which dissection of an adult male cadaver revealed no L4 contribution to the lumbosacral plexus. We discuss the surgical and clinical implications of such an anatomic variation.

We herein present a cadaveric case report in which the L4 nerve did not converge with L5 to form the lumbosacral trunk, resulting in no L4 contribution to the lumbosacral plexus.

We report on a 79-year-old male cadaver who died of a myocardial infarction. There was no history of abdominopelvic surgery or disease. No surgical incisions were found on the back or abdominal wall. During routine dissection of the left posterior abdominal wall following piecemeal removal of the psoas major muscle, it was noted that the lumbosacral trunk was absent. In other words, the L4 ventral ramus was found to not communicate with the L5 ventral ramus (Figure 1). 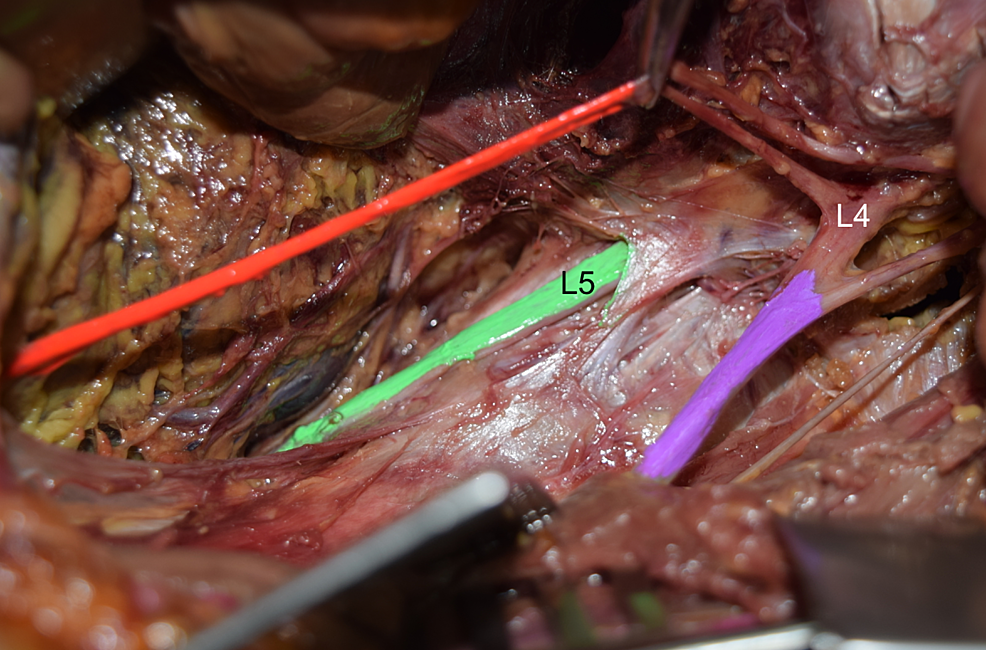 The last major fibers from L4 were found to enter the obturator and femoral nerves. In this specimen, L5 continued into the pelvis to mix with the S1 ventral ramus and was the only lumbar nerve to contribute to the lumbosacral plexus. No other neural (e.g., conjoined, duplicated nerve roots) or vascular variations were noted in this specimen. No transitional vertebrae were identified, and the right lumbosacral trunk was present.

The relative contribution of L4 to the lumbosacral trunk displays wide variation. Webber describes cases ranging from minimal L4 contribution to those in which the entire L4 ventral ramus converges with L5 [5]. While L5 is thicker than the contributing branch of L4 in most cases, the branch from L4 to L5 has been shown to exceed the thickness of L5 itself in 21.6% (11/51) of cases [4]. Anatomical variations in which L3 is an additional contributor to the lumbosacral trunk have also been reported [4-5].

Due to this variability, L4 often serves as a boundary root, demonstrating greater participation in the lumbar or sacral plexus. Depending on proportionate participation, the lumbosacral plexus can be classified as cranially prefixed or caudally postfixed. A sufficiently postfixed plexus may explain the lack of L4 merger with L5, although this was not found in our case. In his study of 50 cadavers, Matejčík (2010) reported a 9.8% (5/51) rate of postfixed plexuses, yet the L4 root was present in the lumbosacral trunk in all 51 cases [4].

In a study of 60 specimens, Atlihan and colleagues (2000) found four cases (6.66%) in which the L4 nerve failed to merge with L5 [6]. Similarly, Webber (1961) reported that 6% (3/50) of cases demonstrated no L4 contribution to the lumbosacral trunk [5]. These variations are the likely product of aberrant development.

Importantly, the lack of L4 merger with L5, and the corresponding lack of L4 contribution to the lumbosacral plexus in the absence of a postfixed plexus holds clinical and surgical implications. In such cases, clinical examination of L4 function within the sacral plexus would yield results suggestive of an L4 injury. Similarly, knowledge of this anatomical variant is important for the surgeon in interpreting neuromonitoring during lateral interbody fusion surgery that involves retraction or entering the psoas and in determining the origin of any post-operative deficits.

The lumbosacral trunk is a structure typically composed of a part of the ventral ramus of the L4 nerve and the entire ventral ramus of the L5 nerve. In this case, dissection demonstrated the L4 nerve failed to merge with L5, thus depriving the lumbosacral plexus of its L4 contribution. Despite a low reported incidence in the literature (approximately 6%), such an anatomic variation holds clinically and surgically salient implications.

Human subjects: Consent was obtained by all participants in this study. Swedish Institutional Review Board issued approval N/A. The present study protocol did not require approval by the ethics committee in our institution, and work was performed in accordance with the requirements of the Declaration of Helsinki (64th WMA General Assembly, Fortaleza, Brazil, October 2013). Conflicts of interest: In compliance with the ICMJE uniform disclosure form, all authors declare the following: Payment/services info: All authors have declared that no financial support was received from any organization for the submitted work. Financial relationships: All authors have declared that they have no financial relationships at present or within the previous three years with any organizations that might have an interest in the submitted work. Other relationships: All authors have declared that there are no other relationships or activities that could appear to have influenced the submitted work.

© Copyright 2017
Schmidt et al. This is an open access article distributed under the terms of the Creative Commons Attribution License CC-BY 3.0., which permits unrestricted use, distribution, and reproduction in any medium, provided the original author and source are credited.