A 42-year-old woman, a poultry-seller, was admitted to our institution for hypothermia, vomiting, frontal headache, evolving over one month. Generalized seizures complicated the symptoms three days before admission. The patient has a history of Hepatitis B and has been positive for HIV1 for five years but voluntarily stopped her antiretroviral treatment. Physical examination showed that she was conscious, emaciated, had oral candidiasis, and a frontal scalp swelling. No neurological deficits were noticed. Laboratory results showed anemia (Hemoglobin = 10.5g/dl), lymphopenia (Lymphocyte count = 2.25*103/µL) and a low CD4+ count of about 73 cells/mm3. Tuberculosis screening by bronchopulmonary sputum, gastric sampling analysis, and chest X-ray was unremarkable. 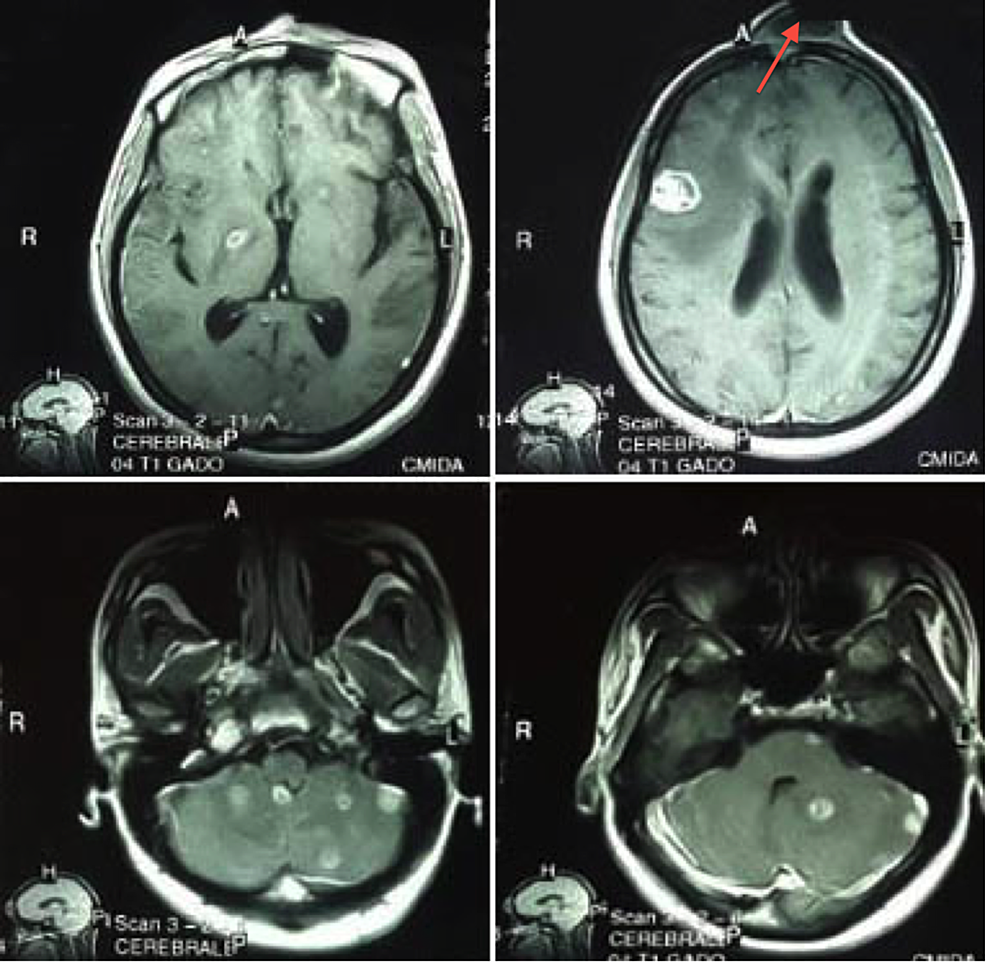 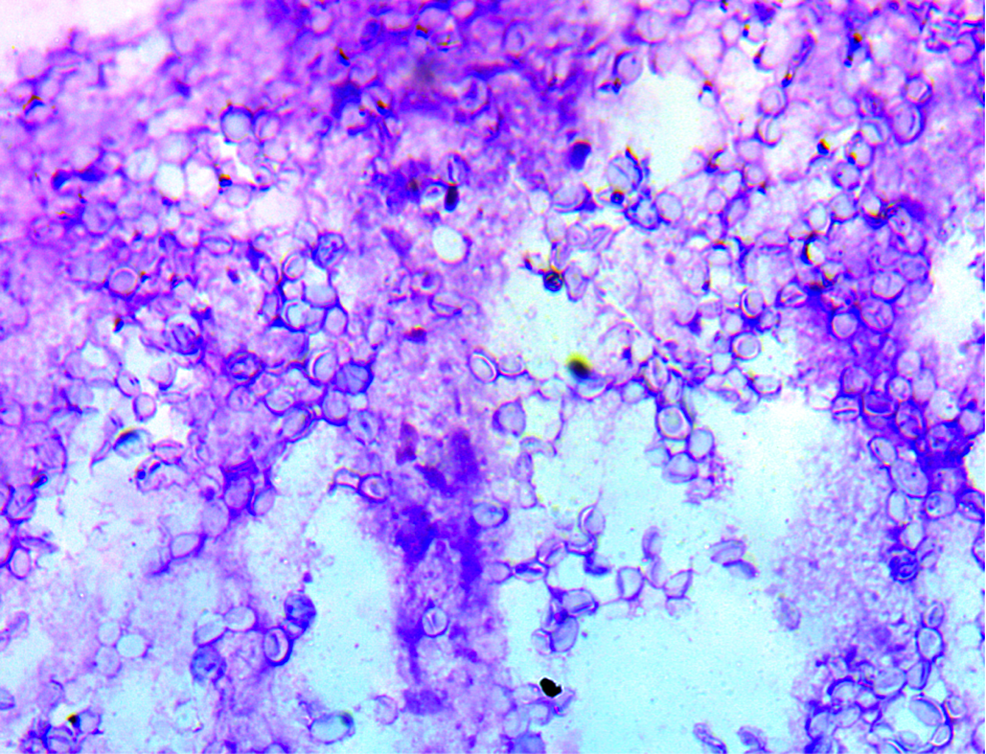 The patient received an initial infusion of liposomal amphotericin B (150 mg daily) for the first four weeks of treatment. She started a new antiretroviral therapy. Subsequently, she was discharged with an oral dose of itraconazole (200mg twice daily) for six months. On the follow-up, eight months later, the patient was fine, and the post-therapeutic brain MRI and CT scan showed a resolution of brain abscesses. Consecutive follow-up examinations were scheduled every two months for one year.

Histoplasmosis is a fungal infection caused by two human pathogenic variants of Histoplasma capsulatum: var. capsulatum and var. duboisii. A third pathogenic variant has been described in the equine population. Since the initial description in 1952 by Dubois, the infection by the variant duboisii has been referred to as the African Histoplasmosis [3-6]. The yeast is found in soil and materials contaminated with bird or bat droppings. The reservoir of H. capsulatum var. duboisii is deemed to be in Africa as the published cases were reported from living in this continent, especially in West and Central Africa. The cases published from Spain and Japan were of African immigrants [6]. One exceptional case has been published in an autochthonous patient in India [4]. The disease is probably under-reported in Africa, where less than 300 cases have been published [5,6]. In the Ivory Coast, this is the sixth reported case, and to the best of our knowledge, this is the first African case of brain abscess [7].

Although from the same species, the presentation and pathology of variants duboisii and capsulatum are variable. The variant capsulatum is endemic, not only in the United States around the Ohio and Mississippi River valleys but throughout the world, whereas the variant duboisii is limited to Africa [2]. On microscopy, the yeast cell sizes of variant duboisii are bigger, measuring 10-15 µm versus 2-5 µm for variant capsulatum [4,6]. Furthermore, the variant capsulatum is airborne, causing pulmonary infections, whereas the variant duboisii is involved in skin and bone infections [8]. The mechanism of the hematogenous dissemination of the infection to the meninges or brain is not well understood [9]. Some authors suggest that following inhalation of spores, the yeast forms thrive in the lungs and are initially controlled by helper T cells. In the case of T-cell immunodeficiency, the micro-organisms subsequently spread throughout the body via macrophages.

Published cases of CNS histoplasmosis were either meningitis, myelopathy, encephalitis, or focal parenchymal brain and spinal infections [9,10]. Some cases of stroke by infectious emboli and ventriculoperitoneal (VP) shunt infection have also been reported. CNS histoplasmosis occurs in 5-20% of disseminated infection, where T-cell immunodeficiency is a critical predisposing factor [10,11]. In our case, the patient was a poultry worker with untreated HIV infection. Therefore, her work environment, along with the HIV condition, made her be a typical vulnerable subject for CNS histoplasmosis. Multifocal supratentorial and infratentorial brain abscesses have been described in AIDS patients. However, those cases only involved the variant capsulatum  [10-12].

African histoplasmosis frequently affects bony structures such as the vertebrae, skull, femur, and humerus. In our case, the patient had frontal osteitis, which allowed sampling and analysis of the purulent material.

The diagnosis of African histoplasmosis relies on direct mycological examination, culture, and histopathological examination [4]. Although challenging, the culture of brain tissue and CSF provide the key evidence for the CNS infection [9]. Antigen detection sensitivity in cerebrospinal fluid (CSF) is reported in up to 67% in AIDS patients. Also, histopathology examination with Gomori methenamine silver or periodic acid-Schiff staining better visualizes the several large, thick-walled yeast cells seen mostly in histiocytic and giant cells [4].

CNS histoplasmosis can be a life-threatening condition. It is fatal if untreated. The therapeutic strategy is still controversial. Schestatsky et al. proposed a more aggressive induction phase with amphotericin B (40 mg/kg) for eight weeks [13]. One the other hand, the 2007 clinical practice guideline for histoplasmosis by Infectious Diseases Society of America (IDSA) advocated liposomal amphotericin B (5.0 mg/kg daily for a total of 175 mg/kg given over 4-6 weeks) followed by itraconazole (200 mg two or three times daily) for one year and until resolution of CSF abnormalities, including Histoplasma antigen levels [14]. Since the blood levels of itraconazole may vary widely in patients, a close serum monitoring along with renal and hepatic function are advised to optimize the treatment. The optimal serum level in AIDS patients on antiretroviral therapy (ART) is unknown. However, one should remain mindful of a possible immune reconstitution inflammatory syndrome (IRIS) in those patients during the phase of the treatment [10].

Although cases of brain or spinal cord lesions excision have been documented, the indication of surgery is still unclear, especially in patients with multifocal brain lesions. Moreover, successful cases of CNS histoplasmosis treatment by antifungal agents alone have been published [15].

To the best of our knowledge, this case is the first case of cerebral localization of African histoplasmosis in the Ivory Coast and Africa. We believe this disease is still under-reported in our region. Since the advance in new immuno-suppressive drugs and the pandemic HIV infections, clinicians should expect to have more cases of CNS histoplasmosis. There is a need for personal protection equipment for individuals working in the poultry area. Further epidemiological analyses of national cases should lead to effective preventive actions by mapping of the possible reservoir of Histoplasma capsulatum var. duboisii.

Neurosurgery, School of Medicine at the University of Abidjan, Abidjan, CIV

Pathology, School of Medicine at the University of Abidjan, Abidjan, CIV

© Copyright 2020
Konan et al. This is an open access article distributed under the terms of the Creative Commons Attribution License CC-BY 4.0., which permits unrestricted use, distribution, and reproduction in any medium, provided the original author and source are credited.

Trends, Outcomes, and Predictors of Sepsis and Severe Sepsis in Patients wit ...