Pancreatic cancer is the seventh leading cause of cancer-related mortality worldwide and the eleventh most common cause of cancer-related death in Indonesia. In pancreatic cancer, rapid and early diagnosis is crucial. Carbohydrate antigen 19-9 (CA 19-9), the most sensitive and specific tumor marker for pancreatic cancer, may help in diagnosing and determining prognosis; however, some populations do not express CA 19-9. Cases of low CA 19-9 may occur in populations with Lewis⍺-β- genotype. These populations are not able to express Lewis antigen and CA 19-9; therefore, CA 19-9 investigation cannot be used for diagnostic and therapeutic measures. In patients highly suspicious of pancreatic cancer where CA 19-9 levels are low, alternative tumor markers such as CA 125 and carcinoembryonic antigen or a combination of various tumor markers can be used to increase sensitivity and specificity in diagnosing pancreatic cancer. A 70-year-old man presented with a complaint of worsening abdominal pain for the last two days. The patient had dark-yellow urine and pale stool. Abdominal ultrasonography and computed tomography scan showed a mass on the head of the pancreas, which was highly suspicious of pancreatic cancer.

Tumor markers that can help confirm the diagnosis and establish prognosis include carbohydrate antigen 19-9 (CA 19-9), carcinoembryonic antigen (CEA), and CA 125 [2]. CA 19-9 is the most sensitive (79%) and specific (82%) tumor marker for pancreatic cancer compared to other tumor markers; however, 10% of the population with negative Lewis genotype do not express CA 19-9 [3]. Furthermore, there are subgroups of pancreatic tumors with CA 19-9 levels that are not elevated or fluctuating; therefore, CA 19-9 cannot be used for diagnosis or post-treatment monitoring. In this case report, we present a case of a pancreatic tumor without increased CA 19-9 level.

A 70-year-old man presented to the Emergency Room (ER) of Wangaya Regional Hospital with a complaint of worsening abdominal pain for the last two days which was mainly localized to the left upper quadrant of the abdomen, with a Visual Analog Scale (VAS) score of 4-5 which worsened after eating. The pain was persistent with nausea, vomiting, and weight loss. In the last year, the patient had experienced several episodes of similar abdominal pain, as well as fatigue and jaundice. Moreover, his urine became dark-yellow similar to tea, and, occasionally, he experienced pale watery stools; his weight decreased by about 10-15 kg. He denied any hematemesis and dark-colored stools. Physical examination showed anemic conjunctiva, icteric sclera, and a palpable mass on the epigastric region of the abdomen with tenderness and normal bowel movement. Before he came to Wangaya Regional Hospital, he admitted that he had sought several medical advice at a local public health center, and was diagnosed with dyspepsia. 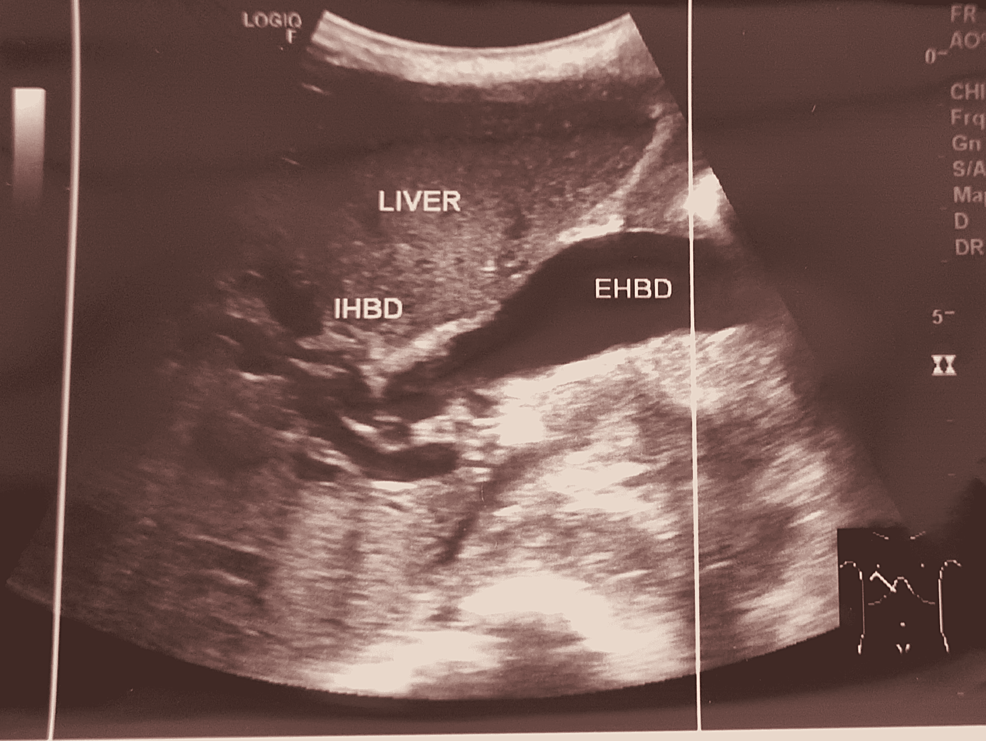 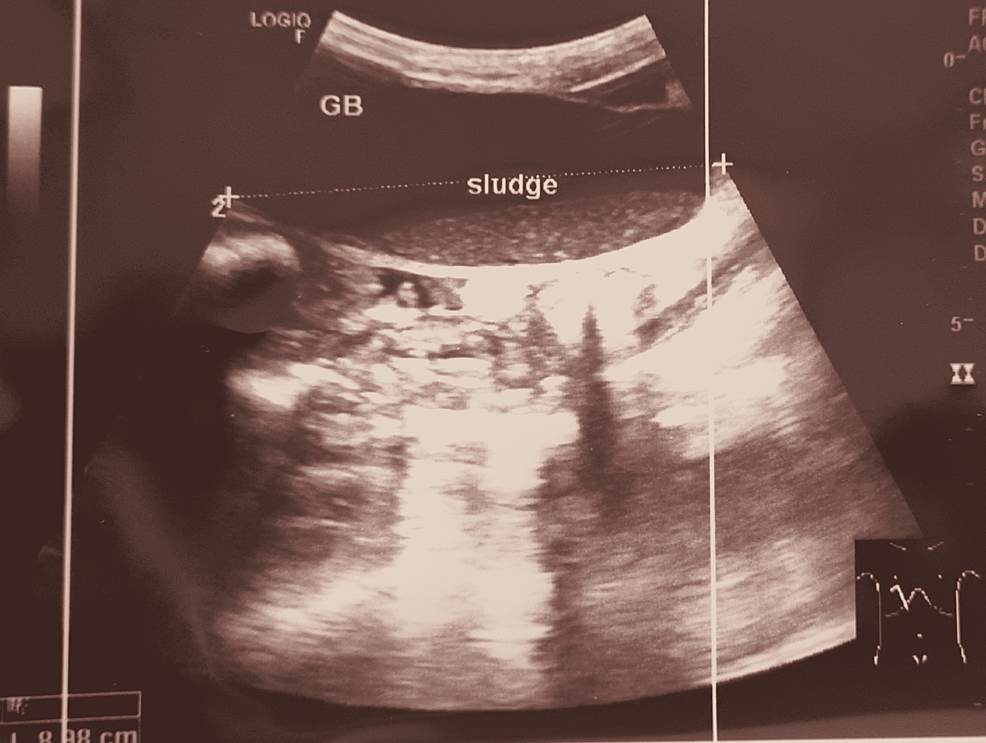 Based on the abdominal USG findings, a contrast-enhanced abdominal CT scan and CA 19-9 tests were performed. The contrast-enhanced abdominal CT scan showed features of dilated IHBD caused by a mass on the head of the pancreas; other abdominal organs were within the normal limit (Figure 3). CA 19-9 level was relatively low, 2.06 U/mL. Open biopsy of the pancreas, CA 125, and sialylated Lewis antigen (Sla) were not performed due to the limitation of the hospital’s facility. Finally, the patient was diagnosed as highly suspicious for caput pancreas tumor because the diagnosis was unclear due to the limitations of our facilities. Subsequently, he was referred to Rumah Sakit Umum Pusat (RSUP) Sanglah for further diagnostic measures and treatment. 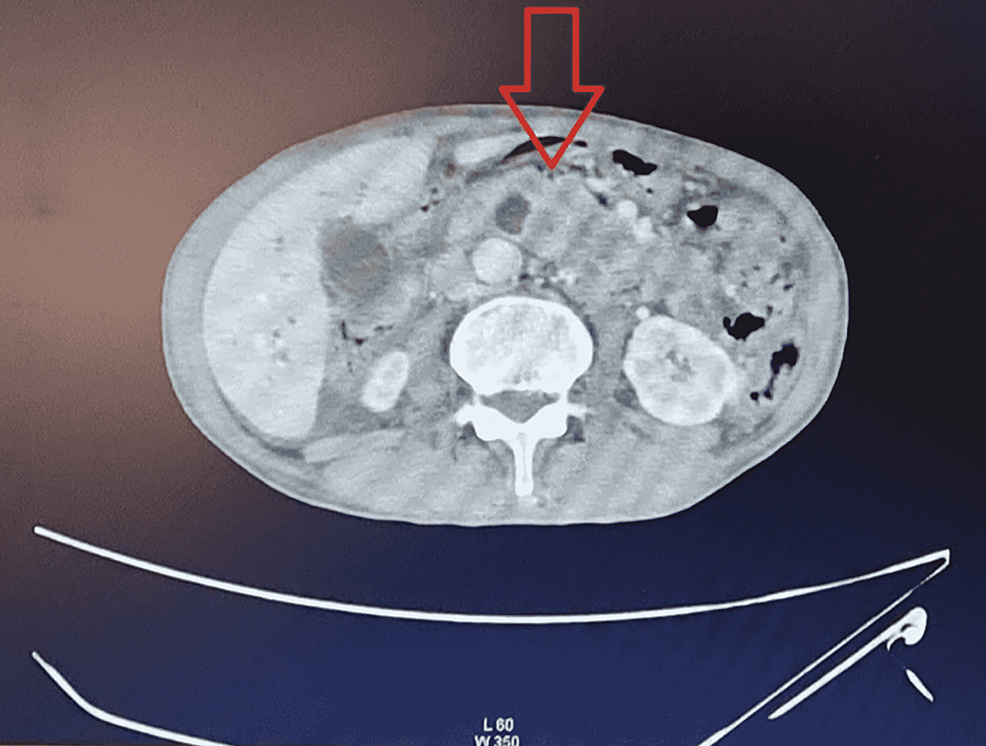 Generally, CA 19-9 level is increased in pancreatic cancer. In normal pancreatic tissue, protein glycosylation produces end-products, which function as a lubricant for pancreatic ducts. However, an aberrant process occurs in cancer tissues, leading to the production of CA 19-9 [6]. Currently, CA 19-9 or Sla are the only tumor markers approved by the Food and Drug Administration (FDA) in the United States to support the diagnosis of pancreatic cancer [2]. We did not check Sla levels because this tumor marker is not available yet in Indonesia, especially in Bali.

However, there are some cases in which CA 19-9 is unreliable in diagnostics, prognosis, and therapeutic monitoring because of the inconsistent levels, as reported previously [9-12]. In this case, the patient was suspected of having pancreatic cancer due to a mass in the epigastric region and gradual non-specific symptoms over the last year. There were also symptoms and signs of biliary system obstruction as the patient experienced jaundice, changes in urine and stool, hyperbilirubinemia, and was found to have IHBD and EHBD dilatation on abdominal USG. Based on the imaging findings, the cause of obstruction was a tumor of the head of the pancreas. However, the CA 19-9 levels were relatively low (2.06 U/mL), which was inconsistent with the typical findings of pancreatic cancer.

This phenomenon may occur in populations with Lewis⍺-β- genotype. These populations are not able to express Lewis antigen and CA 19-9; therefore, CA 19-9 investigation for diagnostic and therapeutic measures cannot be reliably used. As much as 10% of the global population has a Lewis⍺-β- genotype, consisting of approximately 5-10% Caucasians and 22% non-Caucasians [3,13,14]. In such populations, there is a genetic deficiency to produce fucosyltransferase enzyme; therefore, CA 19-9 cannot be produced [15]. Epidemiological studies regarding the percentage of the negative Lewis population in Indonesia are yet to be conducted.

There are prognostic implications for most pancreatic cancer patients with relatively low CA 19-9 levels. Isacoff et al. found that a subgroup of pancreatic cancer patients (n = 13) with normal CA 19-9 levels (≤36 U/mL) at the start of chemotherapy had a longer mean survival rate (30.5 months) compared to most cases with increased CA 19-9 (n = 52; 17 months) [18]. However, this study was conducted in only one institution, and most patients sampled in the study had received previous therapy, either chemotherapy or tumor resection. Therefore, low CA 19-9 levels might be caused by previous treatment.

An interesting finding of the study was that the CA 125 levels in negative Lewis patients were higher (251.9 ± 642 U/mL) than in positive Lewis patients (135.8 ± 401.6 U/mL, p < 0.001) [21]. Therefore, other tumor markers may be used in cases of low CA 19-9. Although more often used in ovarian cancer, CA 125 is shown to have significant clinical implications in pancreatic cancer. CA 125 is known to be superior in determining whether pancreatic cancer is resectable compared to CA 19-9. CA 125 also correlates with the metastasis-related burden [22].

CA 125, also known as mucin 16 (MUC16), has been recommended by the Chinese Study Group for Pancreatic Cancer for diagnosis, especially in conditions where the CA 19-9 levels are negative and can be used as an additional workup for CA 19-9, especially in hyperbilirubinemia conditions [23]. CA 125 has been shown to be related to metastatic pancreatic cancer with a threshold of 18.4 U/mL [24]. CEA, another tumor marker, can predict the prognosis of advanced pancreatic cancer at diagnosis with a threshold of 7.0 ng/mL [25]. CA 242 is also increased in pancreatic cancer and other digestive cancers; however, it can only be used to monitor response to therapy in advanced cancer and monitor recurrence. However, CA 242 is not effective in detecting early-stage cancer [26].

A combination of several tumor markers may increase the sensitivity and specificity. Combined CA 125 and CA 19-9 increases specificity and sensitivity for pancreatic cancer that has not been previously diagnosed [2]. Although many tumor markers and combinations have been proposed by various studies, none of them can be used in clinical practice other than CA 19-9 because they have not been standardized [2].

In general, CA 19-9 levels are elevated in pancreatic cancer and have diagnostic, prognostic, therapeutic, and recurrence monitoring benefits. However, there are some cases of pancreatic cancer in which the CA 19-9 test is not reliable, as reported in this case. This phenomenon occurs in negative Lewis antigen populations, with contradicting prognostic implications. In such cases, alternative tumor markers such as CA 125 and CEA or a combination of various tumor markers can be used to increase sensitivity and specificity in diagnosing pancreatic cancer.

© Copyright 2022
Yong et al. This is an open access article distributed under the terms of the Creative Commons Attribution License CC-BY 4.0., which permits unrestricted use, distribution, and reproduction in any medium, provided the original author and source are credited.