For the last 25 years, tuberculosis (TB) has been deemed a global public health emergency and is the leading cause of death from infectious diseases among adults around the globe [1]. The World Health Organization (WHO) estimates suggest that 9.9 million individuals developed TB in 2020, and the majority of these people were residents of South-East Asia. However, only 6.4 million of these approximately 10 million people were given a diagnosis and an official notification about their illness. Each year, 1.3 million people die due to TB [2].

The perforation may occur at the beginning of or before the initiation of treatment and, on average, it occurs nine months after the appearance of initial symptoms [6]. A paradoxical reaction (PR) is suspected in cases where intestinal perforation occurs during or after the treatment [7]. In a PR to TB treatment, clinical symptoms initially improve, but later a clinical or radiological deterioration of existing TB lesions or the onset of new lesions is observed [8,9]. Of note, 6-30% of patients receiving anti-tubercular therapy suffer from PR. We present a case of intestinal perforation occurring in a patient with normal immunity who was being treated for intestinal TB with anti-tubercular drugs.

A 29-year-old female patient presented to the emergency department at our hospital; she had been unwell for the past one month with a fever and abdominal pain, which was associated with watery diarrhea. She had lost 15 kg of weight since the symptoms started. Her medical and surgical history was unremarkable, and she denied any recent travel. On physical examination, she was cachectic, dehydrated, tachycardia [heart rate (HR): 130 bpm], hypotensive (BP: 66/18 mmHg), with a temperature of 39 °C, and was maintaining a SpO2 of 92% on room air. A chest examination revealed scattered crepitation on auscultation; she denied coughing or shortness of breath. The rest of the systemic examination was unremarkable. Her initial blood test showed anemia with hemoglobin (Hb) of 8 mg/dl, but other baselines were within normal limits. Chest X-ray revealed bilateral inhomogeneous faint lung opacities (Figure 1). Three consecutive early-morning sputum samples were sent for acid-fast bacilli (AFB) culture, in which the first two samples were negative. 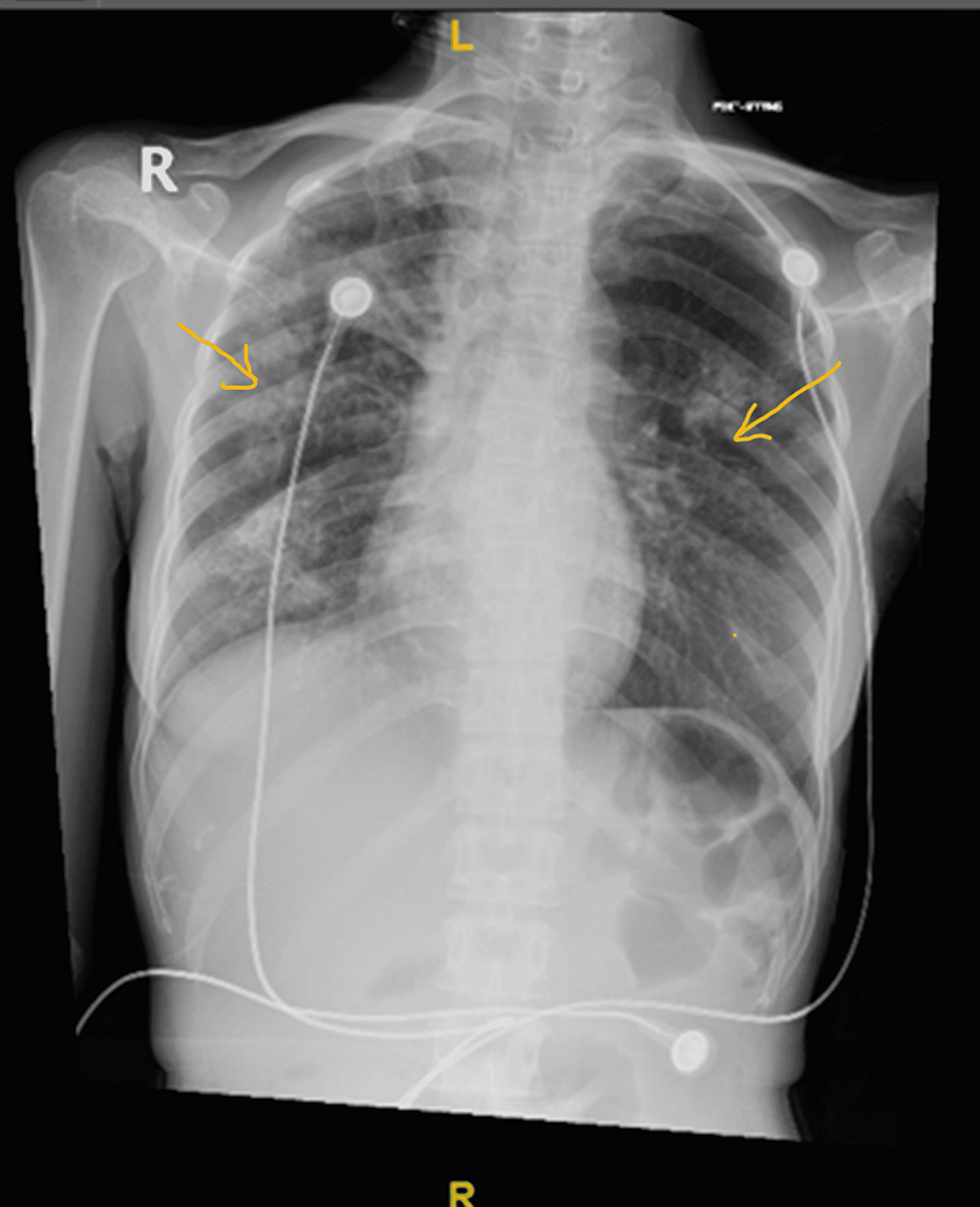 During her hospital stay, she had repeated hematemesis that caused a massive drop in Hb to 3 mg/dl. Oesophago-gastro-duodenoscopy (OGD) showed focal scarring of D1, suggestive of a healed duodenal ulcer. Subsequently, she had severe lower abdominal pain. Abdominal erect X-ray (Figure 3) and abdominal CT (Figure 4) were done, and both showed pneumoperitoneum. The surgeon was consulted, and she underwent laparoscopic exploration for intestinal perforation, which was converted to an open laparotomy for perforated viscous. A small perforation was seen 150 cm from the ileocecal valve, and during manipulation and adhesiolysis, a second perforation occurred near the first one. 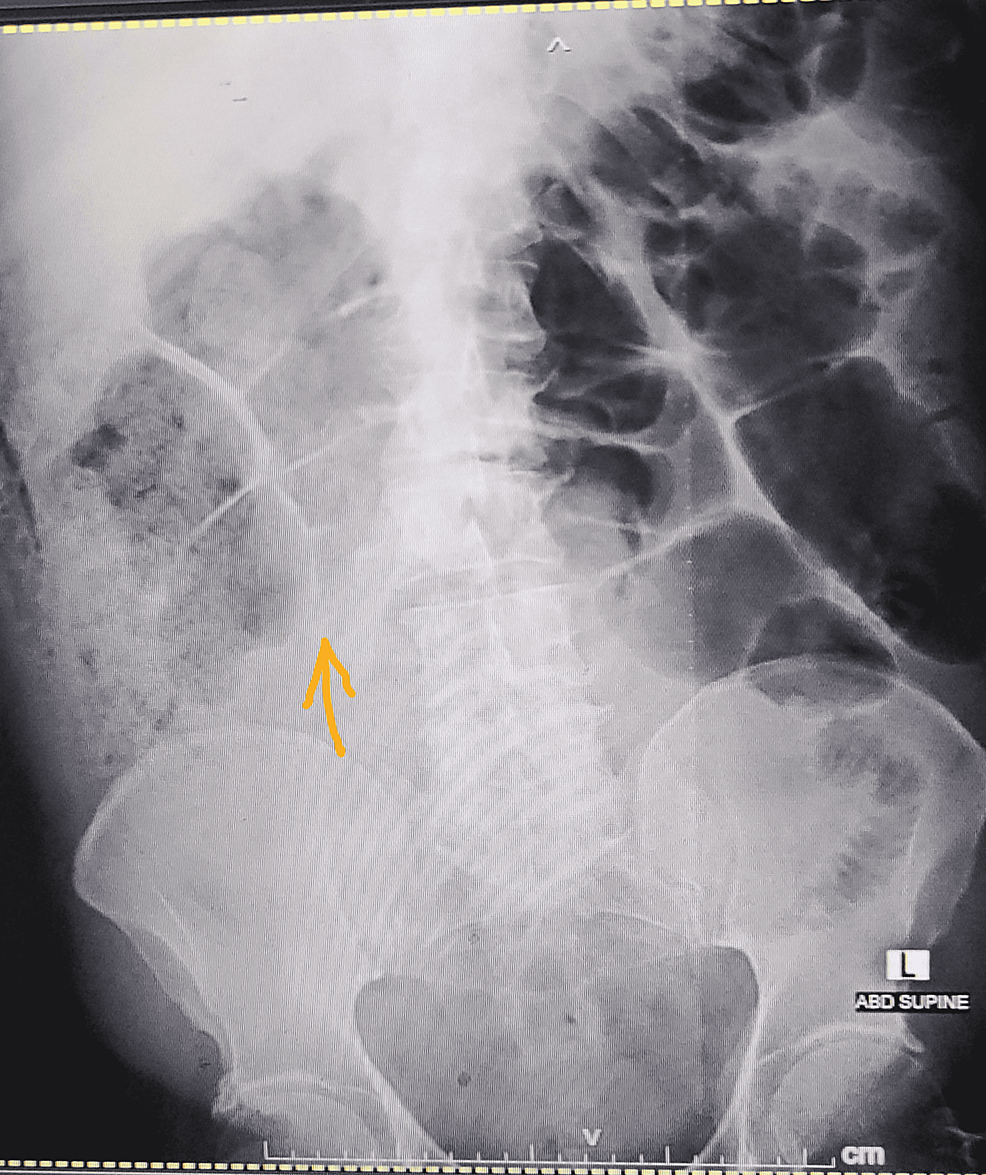 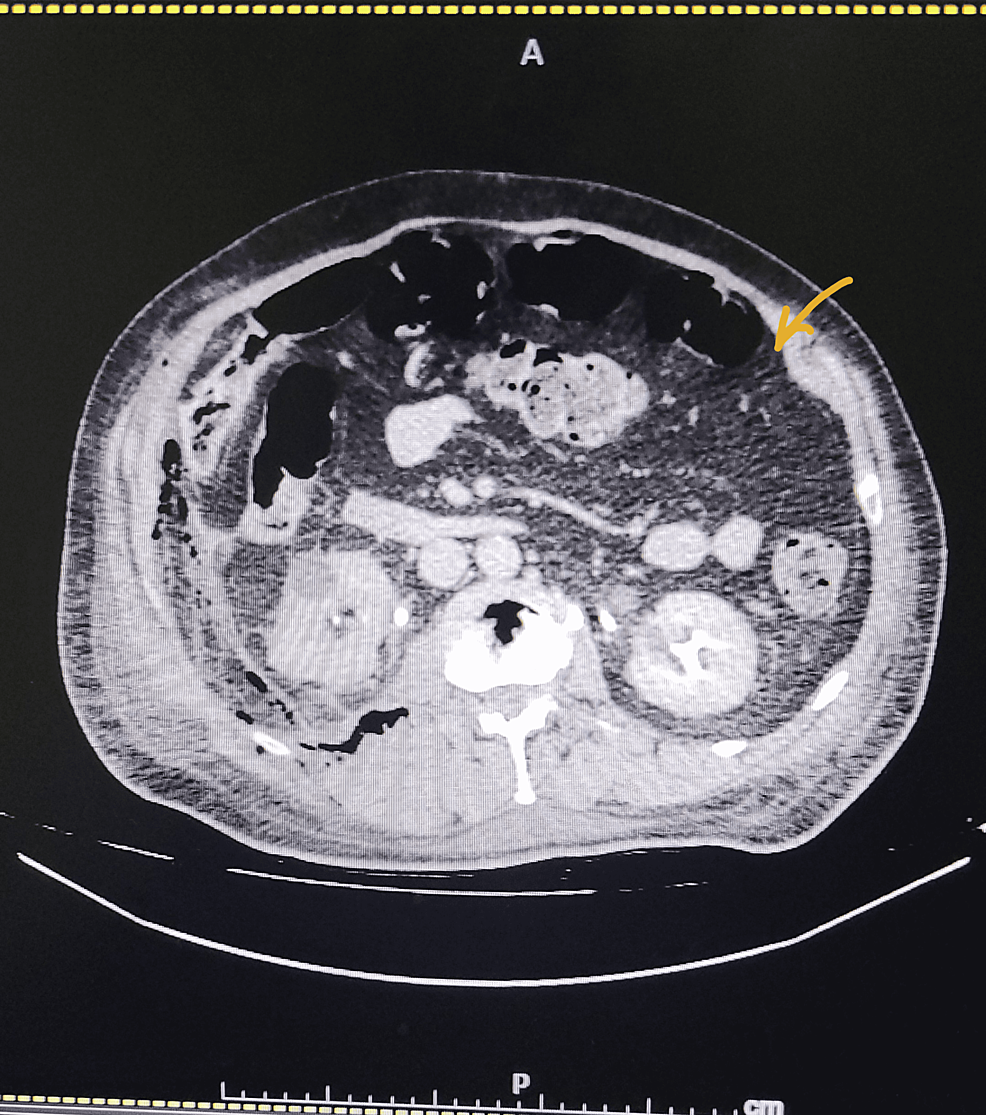 Biopsies from perforated viscus showed chronic granulomatous appendicitis suggestive of TB (Figure 5). Only one month after admission, the third AFB sample returned positive. Anti-TB medications were continued for another nine months, and the patient's condition improved; she was sent home with oral medications. The patient has been followed up for one year after the surgery and has remained asymptomatic. She has provided informed consent for the use of her medical information in this case report. 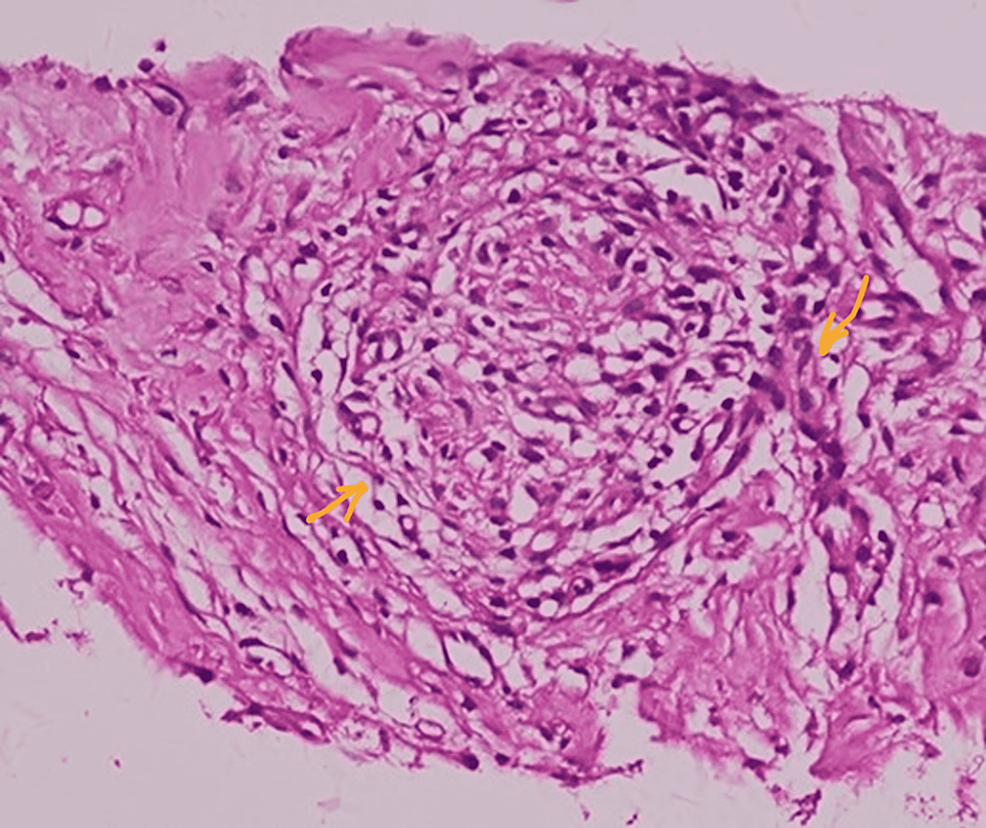 The pleura, lymph nodes, central nervous system, bones, and abdomen can be affected by extrapulmonary TB. Gastrointestinal TB accounts for 17% of all extrapulmonary cases and is the most common presentation of abdominal TB [5]. Intestinal perforation occurs in an estimated 1-15% of all intestinal TB patients [6].

PR is characterized by a radiological or clinical worsening of pre-existing lesions or the development of new lesions in patients who showed an initial improvement when receiving anti-TB treatment [8]. Typically, it is a transient, mild, and self-limiting phenomenon, but higher morbidity and mortality have been reported when the central nervous system is involved [10]. In increasing order of frequency, PR has been reported in patients with TB affecting the abdomen, lymph nodes, skin/soft tissues, respiratory system, and nervous system. One report suggests that new lesions at other sites occur in approximately 25% of the patients while worsening of primary lesions occurs in approximately 75% of the patients [9].

In previous studies, PR has been typically reported to develop within one to six months after starting anti-TB therapy [11]. Moreover, poor nutritional status has been cited as a possible factor contributing to intestinal perforation [12]. Intestinal perforation is an uncommon complication of intestinal TB that occurs due to the formation of adhesions within the surrounding tissues following a reactive thickening of the peritoneum.

A complete understanding of the pathophysiological mechanism of the PR has not yet been developed. Delayed hypersensitivity of the host is strengthened by the heightened exposure to mycobacterial antigens released from the bacilli that were killed by effective anti-tubercular therapy. PR is related to a direct effect of the host over bacterial products and is believed to be a delayed hypersensitivity reaction to bacterial antigens [10]. Tumor necrosis factor-alpha (TNF-α) is believed to play an important role as PR cases have reportedly been associated with the cessation of biological anti-TNF-α therapies in patients with Crohn’s disease [13].

© Copyright 2022
Alebaji. This is an open access article distributed under the terms of the Creative Commons Attribution License CC-BY 4.0., which permits unrestricted use, distribution, and reproduction in any medium, provided the original author and source are credited.