Mycoplasma pneumoniae is a respiratory pathogen responsible for community-acquired atypical pneumonia. Apart from respiratory manifestations, other system involvement has also been reported. We present a case of interstitial pneumonia and a concurrent episode of acute pancreatitis in a young female who presented with fever, cough, vomiting, and epigastric pain. The abdominal evaluation revealed epigastric tenderness with no signs of organomegaly. Her complete metabolic profile was nonsignificant except for elevated serum lipase and amylase. Clinical, serological, and radiological features and detailed investigations confirmed the diagnosis of acute pancreatitis and interstitial pneumonia caused by M. pneumoniae in the absence of any other etiology. Her respiratory and gastrointestinal symptoms improved rapidly after commencing clarithromycin, providing a possible link between M. pneumoniae and pancreatitis.

A 41-year-old female with no significant past medical history was brought to the emergency department with epigastric pain, nausea, and vomiting for the last five hours. The pain was sharp, sudden in onset, 8/10 in intensity, radiated to the back, and accompanied by nausea and two episodes of non-bloody vomiting. She also complained of cough, fever, and mild dyspnea for the last three days, for which she took paracetamol. However, her symptoms had not resolved. She denied smoking, alcohol use, and illicit drug abuse. She reported no history of travel, sick contacts, or recent trauma.

On initial evaluation, she looked dehydrated and well oriented in time, place, and person. She had a temperature of 100oF, respiratory rate of 21/minute, blood pressure of 110/75 mmHg, and heart rate of 95/minute. The abdominal evaluation revealed epigastric tenderness with no signs of organomegaly. Respiratory and cardiovascular examination was unremarkable. The results of initial laboratory results are shown in Table 1. The complete metabolic profile was nonsignificant except for elevated serum lipase and amylase. The results of the lipid profile were within the normal range.

Abdominal ultrasound was negative for any biliary ductal dilation, gall stones, or gall bladder inflammation. She underwent abdominal computed tomography (CT), which revealed swollen and edematous pancreas with ill-defined borders, consistent with a diagnosis of acute pancreatitis (Figure 1). The patient was kept nothing by mouth, and she was managed supportively with intravenous fluids, appropriate analgesics, and antiemetics. 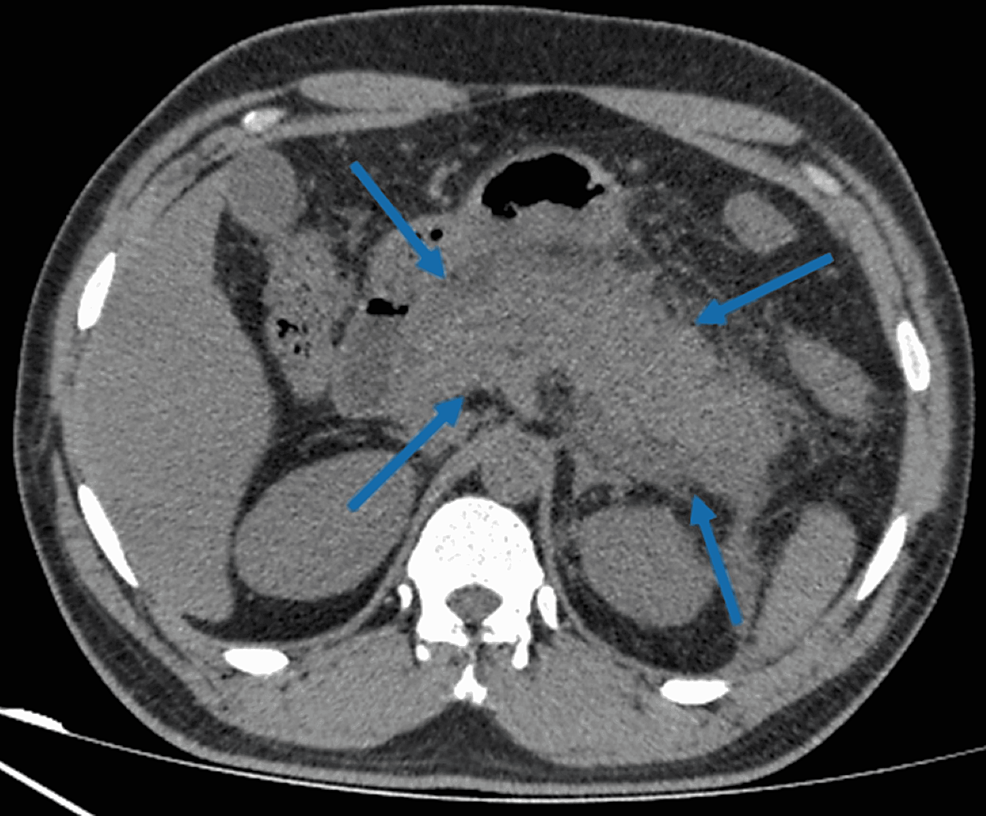 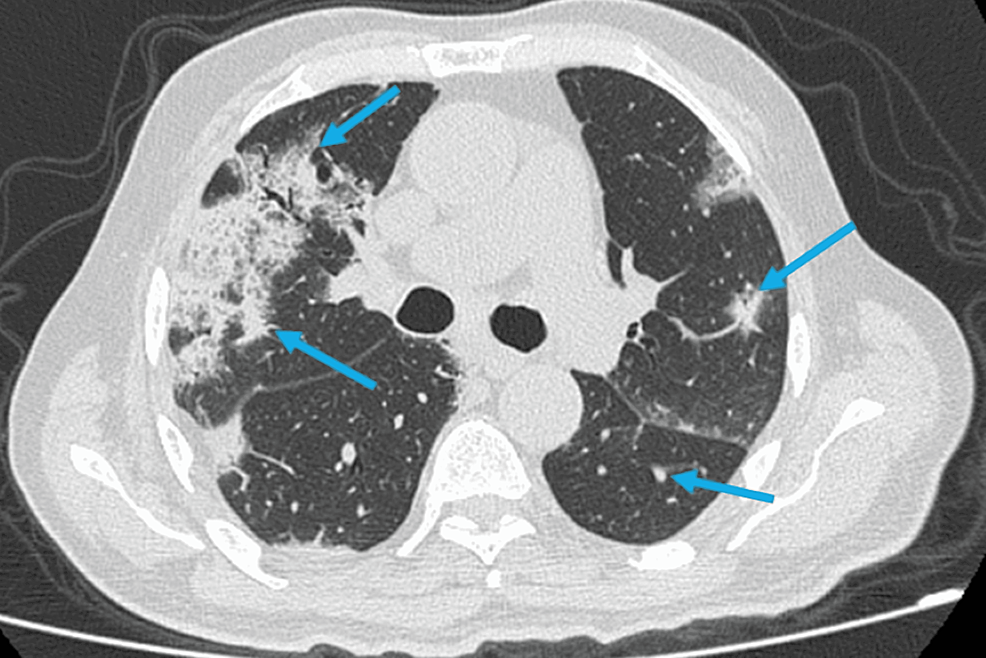 She was diagnosed with acute pancreatitis and diffuse interstitial pneumonia (DIP) caused by M. pneumoniae. She was commenced on clarithromycin 500 mg twice a day along with the supportive treatment. She was observed closely, and a daily assessment of her amylase and lipase levels was done. Her respiratory and abdominal symptoms improved over the next three to four days with complete resolution of symptoms and normalization of serum lipase and amylase levels.

The pathophysiology of pancreatitis injury due to M. pneumoniae infection is not understood yet; however, a few mechanisms have been proposed. M. pneumoniae can spread hematogenously to distant sites and induce the release of inflammatory cytokines at the local site of infection, which causes direct extrapulmonary manifestations [12]. Immunological reactions between M. pneumoniae and immune cells leading to activation of the immune system may also trigger the inflammatory response causing indirect pancreatic injury by expressing glycolipids and glycoproteins to the cell surface [6,7]. Another mechanism of extrapulmonary manifestation could be vasculitis or thrombosis with or without activation of the systemic coagulation cascade resulting in pancreatic injury [13].

© Copyright 2022
Khan et al. This is an open access article distributed under the terms of the Creative Commons Attribution License CC-BY 4.0., which permits unrestricted use, distribution, and reproduction in any medium, provided the original author and source are credited.