Zieve syndrome is a very rare syndrome that presents as a triad of hemolytic anemia, jaundice, and transient hyperlipidemia in patients with alcoholic liver disease. Herein, we present a case of a 30-year-old female with alcoholic liver disease and chronic hepatitis C. She presented with altered mental status and profound jaundice and was subsequently found to have acute hemolytic anemia due to Zieve syndrome. All other causes of hemolytic anemia were ruled out. She abstained from alcohol and received blood transfusions as needed, leading to the improvement of her anemia. This case highlights the need for more medical education about Zieve syndrome as the under-recognition of the disease can lead to unnecessary treatments. We review the existing literature to explain the epidemiology, pathogenesis, diagnosis, and treatment of Zieve syndrome. This case represents a rare presentation of Zieve syndrome in a patient with hepatitis C, and we have hypothesized a possible role of chronic hepatitis C infection in its pathophysiology.

Zieve syndrome is a very rare syndrome that typically presents in patients with alcoholic liver disease with a triad of hemolytic anemia, jaundice, and transient hyperlipidemia. Although thought to be due to the interruption of cholesterol metabolism in the liver causing an altered phospholipid bilayer, the exact mechanism is not definitively known [1]. Diagnosis is made by the presence of hemolytic anemia, jaundice, and transient hyperlipidemia in the setting of chronic alcohol use, although lipid levels are normal in half of all patients [2]. Treatment consists of abstinence from alcohol and blood transfusions as necessary, and most patients recover within 4-6 weeks after alcohol cessation [2,3]. While there are many causes of anemia in chronic liver disease, Zieve syndrome is distinct in that it is hemolytic. Herein, we present a case of a 30-year-old female with Zieve syndrome who has a history of alcoholic liver disease and chronic hepatitis C. This case highlights the need for more medical education about this syndrome, as under-recognition can lead to unnecessary treatments and prolonged recovery.

A 30-year-old female with multiple comorbidities, including chronic liver disease due to alcohol use disorder and chronic hepatitis C, presented to our facility complaining of nausea, vomiting, and shortness of breath. She had not been seen by a medical provider for many years. She had been drinking alcohol for many years prior to presentation and had never been treated for hepatitis C. The physical exam was significant for slurred speech, severe jaundice, scleral icterus, poor oral hygiene, and a distended abdomen. The patient reported no personal or family history of autoimmune disorders or congenital hemolytic anemias. She denied taking any medications associated with drug-induced hemolytic anemia, such as sulfonamides or penicillins, or having had any recent blood product transfusions.

Initial lab studies were significant for a hemoglobin of 6.1 g/dL and a hematocrit of 18% (Table 1). An abdominal CT scan showed moderate ascites (Figure 1). A peripheral blood smear showed acanthocytes and schistocytes (Figure 2). Two units of packed RBCs were transfused on day 1 of admission.

Table 1: Pertinent laboratory data at the time of presentation. 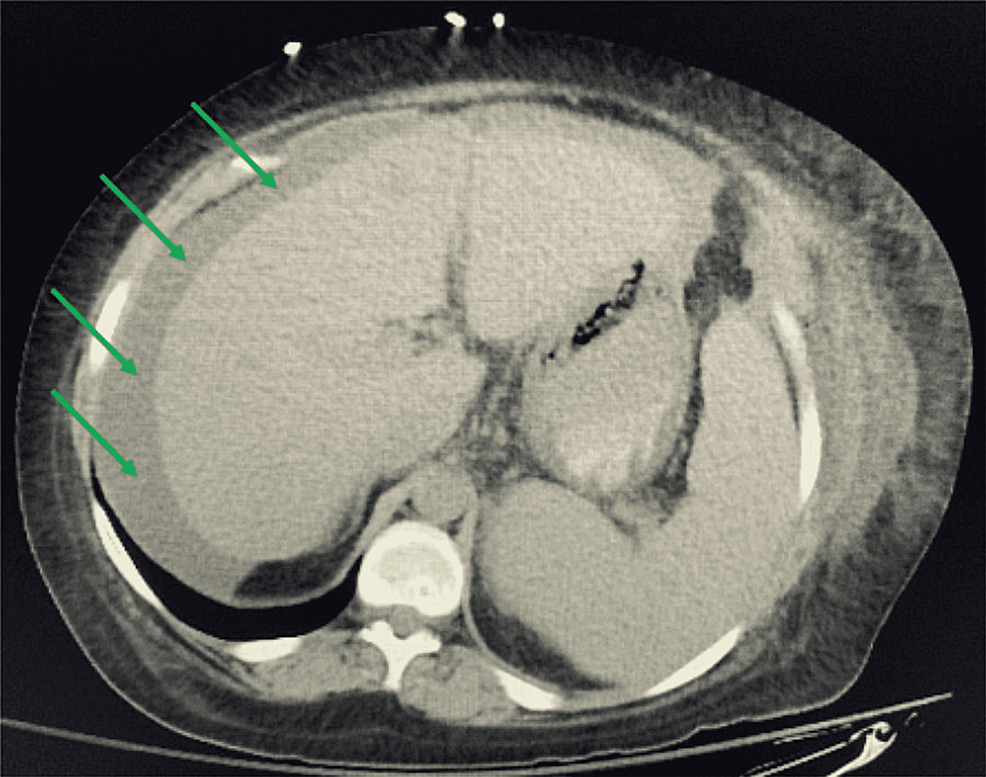 This patient’s diagnosis of Zieve syndrome was based on the features of alcoholic liver disease, hemolytic anemia, severe jaundice, peripheral blood smear findings of acanthocytes and schistocytes, and no other identifiable cause of hemolytic anemia. The patient was advised to abstain from alcohol. Other than the two units of packed RBCs that the patient received on day 1 of admission, she did not receive further blood product transfusions. Her anemia gradually improved, and she was discharged on day 12 of admission (Figure 3). Shortly after discharge, she started treatment for hepatitis C with sofosbuvir-velpatasvir, which led to further improvements in her hemoglobin and total bilirubin levels one month after discharge. Her hemoglobin level (normal range: 11.2-15.7 g/dL) improved from 9.2 g/dL at the time of discharge to 11.2 g/dL at outpatient follow-up one month later. Her total bilirubin level (normal range: 0.2-1.0 mg/dL) improved from 7.3 mg/dL at the time of discharge to 4.1 mg/dL at outpatient follow-up one month later. 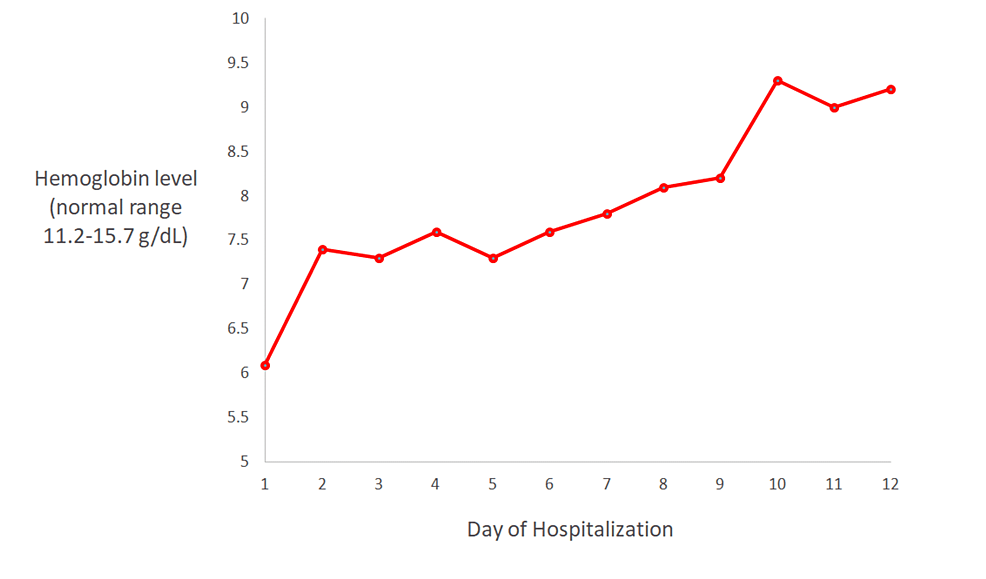 Zieve syndrome, a rare syndrome that consists of a triad of hemolytic anemia, jaundice, and transient hyperlipidemia, was first described in 1958 by Dr. Zieve [4]. The jaundice is profound due to the build-up of bilirubin, both directly from hepatocyte injury and indirectly from hemolysis [2]. Zieve syndrome is frequently under-reported and misdiagnosed. About 200 cases have been described in the literature [5]. A literature search using the PubMed database uncovered 123 publications related to Zieve syndrome, with reported periods of 1958 to 2022.

The exact mechanism of Zieve syndrome is not definitively known. The most well-supported hypothesis asserts that dysregulation of hepatic lipases due to a damaged liver causes a massive mobilization of fat and ensuing hyperlipidemia [2]. Hyperlipidemia causes direct injury to hepatocytes and results in high levels of lysolecithin and lysocephalin, which can trigger the process of hemolysis [1]. Another proposed hypothesis for the pathogenesis of Zieve syndrome asserts that alcohol-induced vitamin E deficiency leads to a reduction in erythrocyte glutathione and polyunsaturated fatty acids. This can cause plasma membrane instability in RBCs and eventually hemolysis [6]. Other suggested mechanisms of Zieve syndrome include pyruvate kinase instability or inhibition of RBC enzymes by acetaldehyde, a reactive metabolite of ethanol [7].

Our patient’s diagnosis of Zieve syndrome was established based on the presence of profound jaundice, hemolytic anemia, an alcohol use disorder, and characteristic peripheral blood smear findings of acanthocytes and schistocytes [8]. Although transient hyperlipidemia is considered a classic finding in Zieve syndrome, lipid levels can be normal on presentation in up to half of patients, as detection and diagnosis can occur months after the initial massive mobilization of fat [8]. Our patient had little medical care prior to this hospitalization. She likely had this event of fat mobilization occur many months prior to the presentation, which explains her normal lipid levels. After abstinence from alcohol, she gradually recovered. These findings support the diagnosis of Zieve syndrome.

The treatment of Zieve syndrome consists of abstinence from alcohol, blood transfusions as needed, and general supportive treatment [2]. Alcohol cessation causes lipases to become more readily activated, causing lipids to be deposited in adipose tissue. This lowers the amount of lipids in the plasma, thus reducing hemolysis and resultant jaundice. The prognosis of this disease is very good, and the vast majority of patients recover within 4-6 weeks of beginning treatment [2]. In one case, a patient with triglyceride levels >4,000 mg/dL was treated with plasmapheresis [9]. Patients with Zieve syndrome who have a history of pancreatitis or intracerebral hemorrhage should be evaluated for plasmapheresis, as elevated lipid levels are known to result in worse outcomes in patients with pancreatitis or intracerebral hemorrhage [3,10]. Importantly, corticosteroids have not been shown to be beneficial in treating Zieve syndrome and should be avoided [11]. Our patient recovered in the expected time frame after beginning treatment.

It is very important to recognize Zieve syndrome in order to prevent complications from misdiagnosis and inappropriate treatment. In some cases, patients have been started empirically on corticosteroids for presumed autoimmune hemolytic anemia, only to be discontinued later when a direct Coombs test is negative. Using corticosteroids in severely ill patients has been linked to an increased incidence of hospital-acquired infections, so it is essential to consider Zieve syndrome in the differential diagnosis in the setting of hemolytic anemia in a patient with alcohol use disorder [12]. In addition, patients with Zieve syndrome commonly present in the context of alcoholic hepatitis. The Maddrey discriminant function for alcoholic hepatitis is a commonly used scoring system that incorporates total bilirubin and prothrombin time to calculate disease severity and prognosis [13,14]. A score above 32 suggests that the patient might benefit from corticosteroid treatment. However, bilirubin levels are expected to be significantly elevated in Zieve syndrome. Failure to consider the effect of Zieve syndrome when using the Maddrey discriminant function can lead to a falsely elevated score and unnecessary corticosteroid use. Improved recognition of Zieve syndrome can improve patient outcomes and prevent unnecessary complications.

Here, we have presented a case of a patient with Zieve syndrome, a very rare cause of hemolytic anemia. We have also reviewed the existing literature to explain the epidemiology, pathogenesis, diagnosis, and treatment of Zieve syndrome. As the incidence of chronic liver disease and alcohol use disorder increases, Zieve syndrome will become more common. Therefore, it is essential to improve awareness of this syndrome. As research and education about Zieve syndrome increase, we anticipate seeing an improvement in patient recovery times and fewer delays in diagnosis.

This work was supported by HCA Healthcare and/or an HCA healthcare-affiliated entity. However, the views expressed in this publication represent those of the author(s) and do not necessarily represent the official views of HCA Healthcare or any of its affiliated entities. We thank Katy Robinson, Ph.D., Cristobal Cintron, DrPH, MSc, and Ali Haider, B.A., for their expertise and assistance throughout all aspects of our study and for their help in completing this manuscript.

© Copyright 2022
Haider et al. This is an open access article distributed under the terms of the Creative Commons Attribution License CC-BY 4.0., which permits unrestricted use, distribution, and reproduction in any medium, provided the original author and source are credited.

Table 1: Pertinent laboratory data at the time of presentation.