Coronary artery ectasia (CAE) is a rare dilation of the lumen in coronary arteries, either localized to one vessel or diffuse in multiple vessels. A 31-year-old white male with no significant past medical or cardiac history, presented with severe sudden onset chest pain, diaphoresis, shortness of breath, and nausea without vomiting. A 12 lead electrocardiogram (EKG) showed an ST elevation in the inferior leads with reciprocal changes, suggestive of myocardial infarction in the right coronary artery (RCA). He was taken directly to the catheterization laboratory for coronary angiography, which identified a mid-RCA thrombus with thrombolysis in myocardial infarction (TIMI)-1 flow, and distal to that in the right posterolateral branch was another thrombus with TIMI-0 flow. Additionally, he was found to have severely diffuse CAE in all of his coronary arteries. Angioplasty successfully restored TIMI-3 flow throughout the RCA. We present this case to discuss the prevention of complications from CAE. There are currently no recommendations on the use of antiplatelet or anticoagulation therapy in patients with CAE.

The pathophysiology of CAE is poorly understood; however, it could be considered as excessive remodeling by proteolytic enzyme degradation of the extracellular matrix and overexpression of matrix metalloproteinases resulting in luminal expansion [5]. Some have suggested possible etiologies to include: Kawasaki disease, atherosclerosis, mycotic or septic emboli, Marfan syndrome, Takayasu disease, systemic lupus erythematosus, polyarteritis nodosa, or Loeys-Dietz syndrome. An overwhelming majority of CAE is incidentally detected during coronary angiography or computed tomography (CT). However, a thrombus in the dilated artery may embolize distally to a smaller segment of the vessel, resulting in a presentation with acute myocardial infarction (AMI) [6].

Because CAE is so rare, it has been challenging for the research community to conduct large trials on how to appropriately manage these patients. As a result, there has not been a consensus on preventative treatment to include an antiplatelet and/or an anticoagulant, versus dual antiplatelet therapy (DAPT), versus triple therapy (DAPT plus anticoagulation). Additionally, if preventative treatment is advised there is no recommendation on whether it should be for a short duration or indefinitely.

A 31-year-old white male with no significant past medical or cardiac history presented to the emergency department (ED) via ambulance with severe sudden onset chest pain, which started about one hour prior to his arrival. His chest pain was associated with diaphoresis, shortness of breath, and nausea without vomiting. The patient reported that his father died at the age of 35 from an AMI, and his father’s mother also died prior to the age of 40 from an AMI. In the ED, a 12 lead electrocardiogram (EKG) showed inferior ST elevations with reciprocal ST depressions (Figure 1), and a mild troponin of 0.018. He was taken directly to the cath lab for further management, where his chest pain continued. 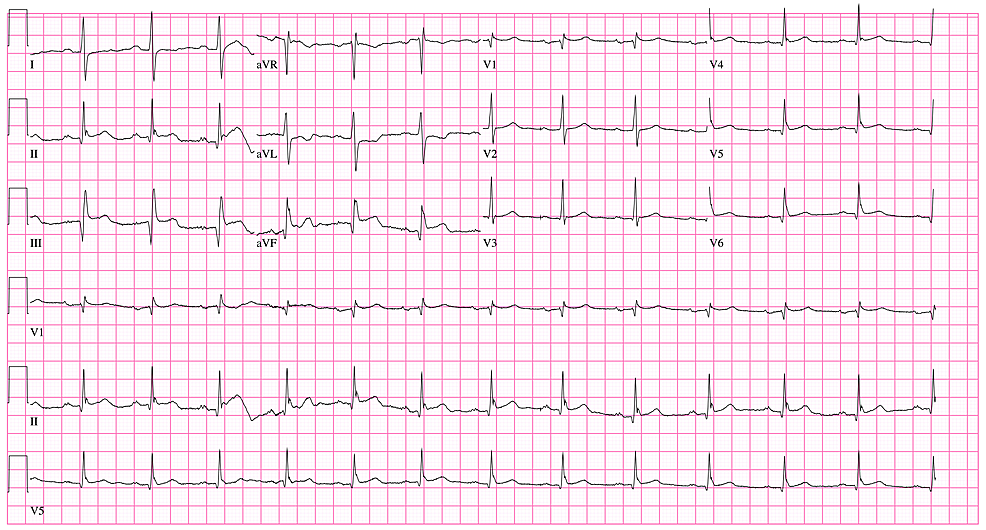 Coronary angiography demonstrated that the left anterior descending (LAD) artery, the ramus intermedius (RI), and the left circumflex artery (LCx) all had severe aneurysmal dilatation in the proximal part of the vessels. The remainder of the left-sided coronary vessels, including the left main artery (LMA), were large ectatic vessels with mild luminal irregularities (Figure 2). The RCA was a very large ectatic vessel, which was subtotally occluded with thrombus in the mid vessel with TIMI-1 flow distally (Figure 3). Additionally, there was another total occlusion in the right posterolateral branch proximally (Figure 3). 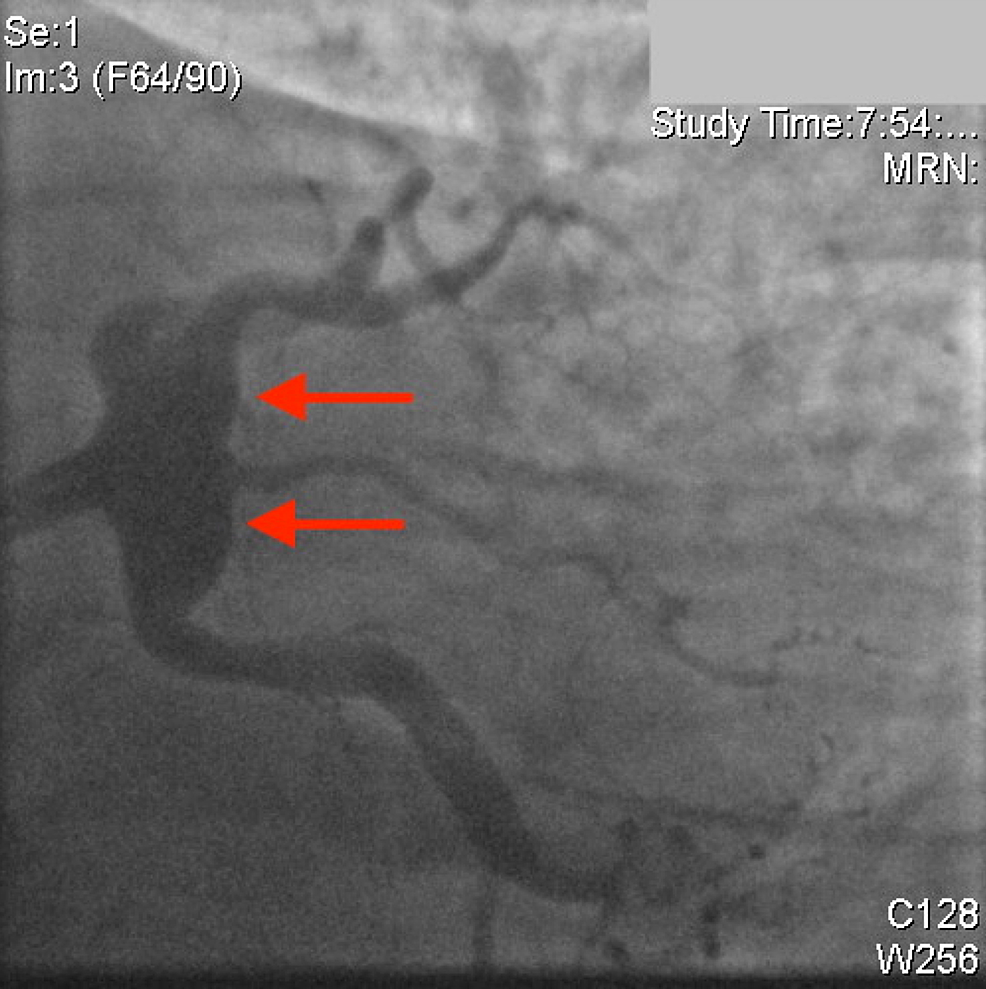 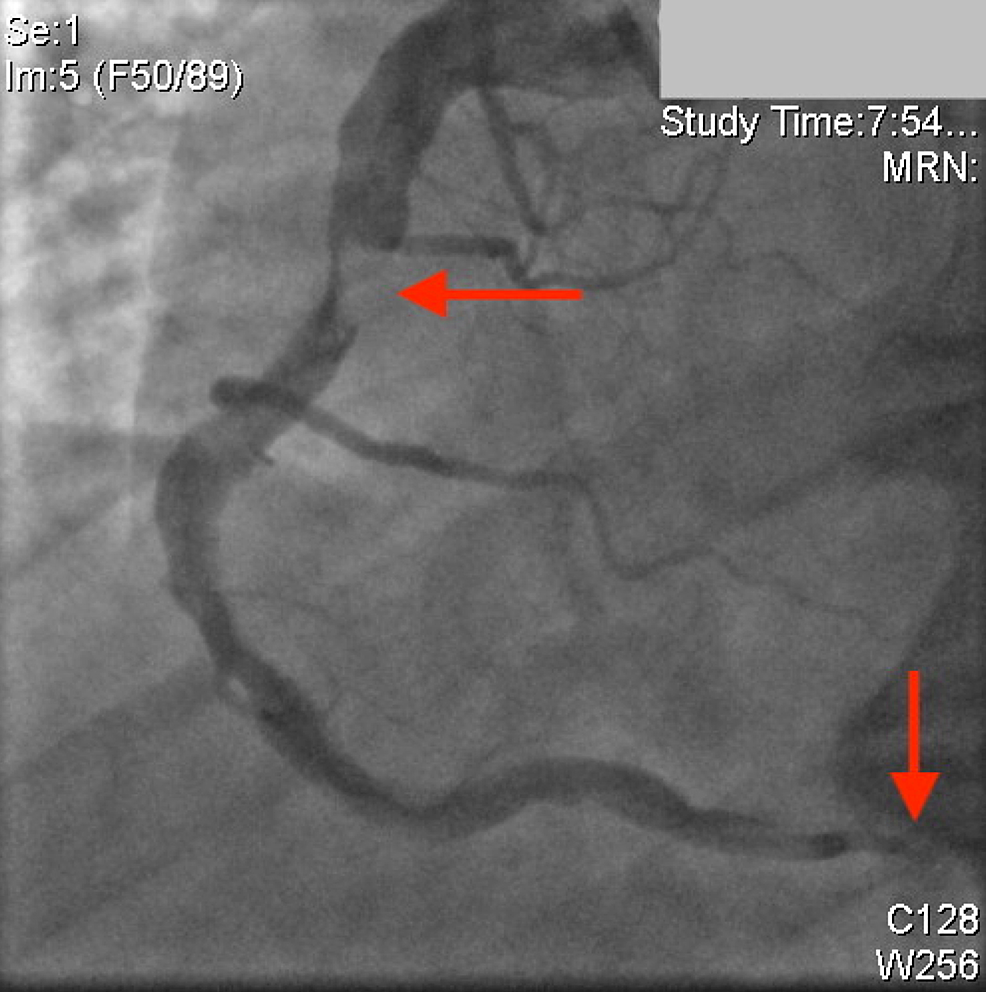 Multiple slow aspiration runs were performed on the RCA, ultimately removing a large amount of thrombus. Repeat angiography showed complete resolution of the RCA thrombus and restoration of TIMI-3 flow into the distal vessels (Figure 4). There was no obvious lesion in the mid-RCA at the site of the thrombus, and it appeared similar to the rest of the vessel. 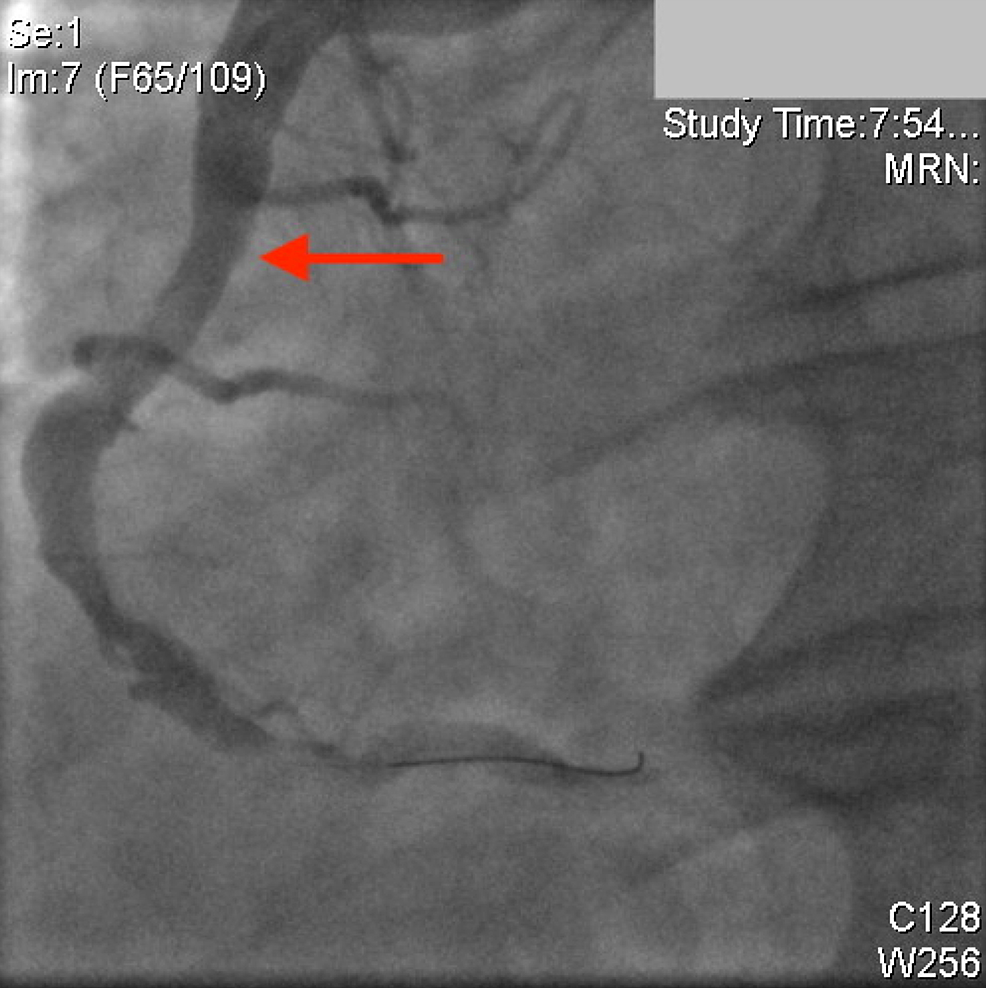 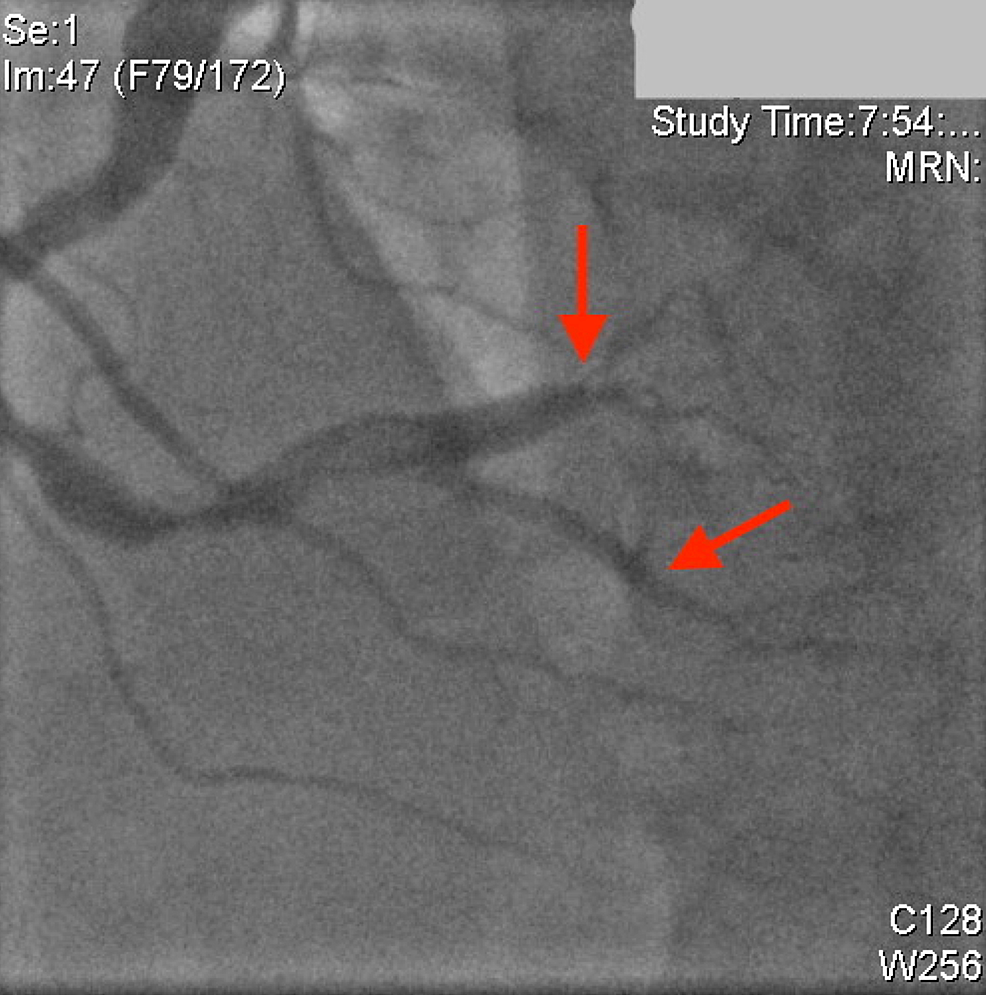 It was determined that stenting was not an appropriate option because the appearance of the arteries resembled an inflammatory vasculitis disease process. Interestingly, there was no identified aortic dilation (Figure 6). After the thrombectomy and angioplasty, his ST segments did improve significantly though they did not completely resolve. Because of the ectatic nature of the vessels, the patient was treated with triple therapy including aspirin, clopidogrel, and rivaroxaban. At his two-month follow-up, he remained stable on triple therapy. 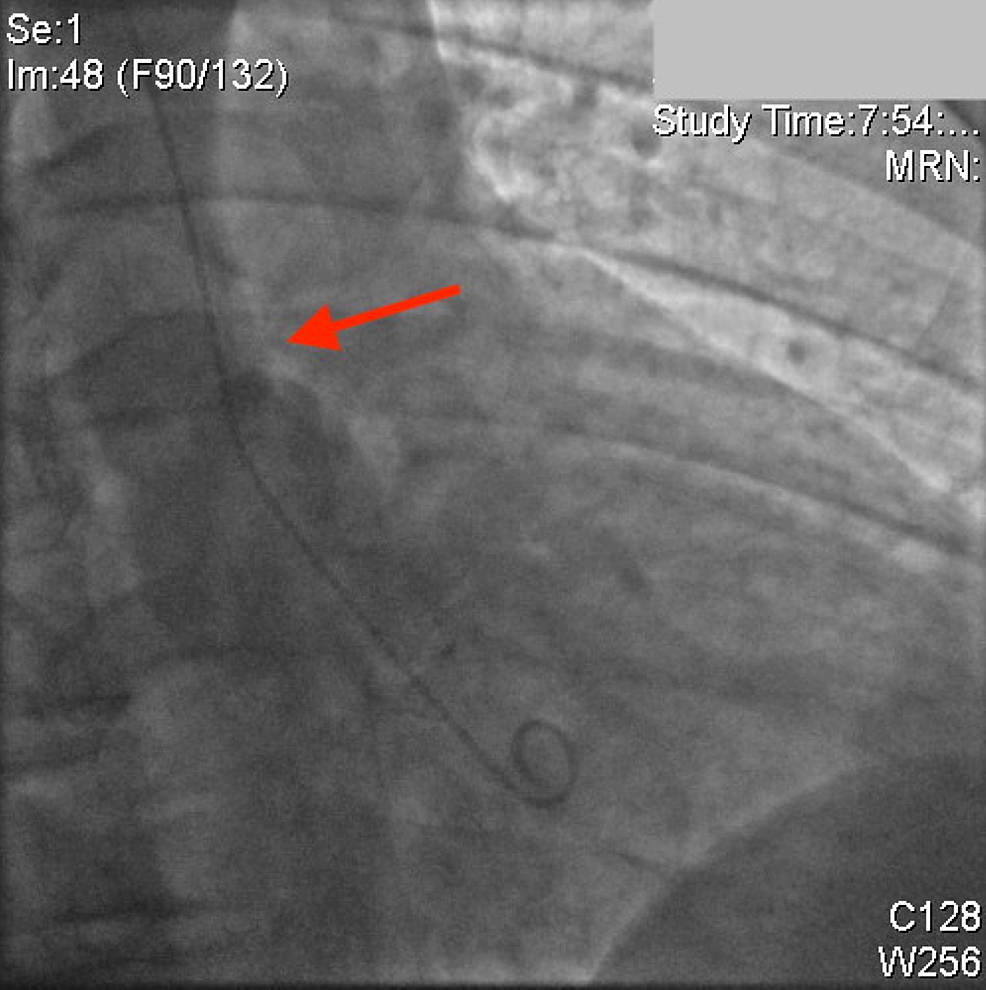 CAE is an unusual finding during angiography, and diffuse disease is even rarer. It is reported that the most commonly occurring sites for CAE are located in the RCA (68%), proximal LAD (60%), LCx (50%), and the left main being the rarest at only 0.1% [7]. CAE has mostly been associated with acquired etiologies, with atherosclerosis as the most predominant (Table 1).

According to Doi et al., these coronary abnormalities are associated with an increased risk of a major adverse cardiac event (MACE) by 3.25 fold, cardiac death by 2.71 fold, and nonfatal myocardial Infarctions by 4.92 fold. They observed that ischemia occurred in nonobstructive coronary segments in greater than 70% of CAE patients who had a nonfatal myocardial Infarction. The suggested mechanism is thought to be a result of slow blood flow velocity through the dilated vessels, thereby increasing blood viscosity and coagulation. This led them to further study the outcomes of CAE patients receiving targeted therapeutic range (TTR) > 60% with warfarin, compared to those with TTR < 60%. They observed this group for 49 months and identified a reduced incidence of MACE by 33% in the group that had a TTR > 60%. While that is a substantial reduction, it should be noted that their population was limited to only eight participants receiving the TTR > 60% [8].

Several studies have suggested that CAE has a high correlation with CAD. Liu et al. studied the progression of 99 CAE patients with a baseline coronary angiogram for up to 16 years when they received a comparative second coronary angiogram. They found that all CAE patients had existing atherosclerosis on their baseline angiogram, and atherosclerosis increased significantly on the follow-up angiogram. However, the ectasia showed minimal changes on the follow-up angiogram. They concluded that the prevention of worsening atherosclerosis may be the more clinically significant treatment modality compared to the treatment of ectasia [10].

Our case of diffuse CAE in a young male, with a history of multiple family members dying from AMIs prior to the age of 40, redresses the question of complication prevention management. Due to the low prevalence of CAE in the population, there are limited studies addressing short and long term management. Medication management has not been standardized, and physicians have relied on their own clinical experiences. After a review of the literature that is available, we believe that it is likely appropriate to maximize treatment for atherosclerosis prevention in addition to choosing DAPT with or without systemic anticoagulation. If the disease continues to progress, despite maximizing medications, a heart transplant may be considered. There remains a need for completion of a large scale study to further address these concerns.

Human subjects: Consent was obtained or waived by all participants in this study. PubCLEAR issued approval MS#6832. Your submission "Manuscript_Severe Coronary Artery Ectasia in a 31 Year Old Presenting with an Inferior STEMI: A Case Report and Literature Review" has been cleared to release externally, provided you have obtained all local permissions before you submit. Conflicts of interest: In compliance with the ICMJE uniform disclosure form, all authors declare the following: Payment/services info: All authors have declared that no financial support was received from any organization for the submitted work. Financial relationships: Nicholas Venuti MD, Andrew Mangano DO declare(s) employment from HCA Healthcare. HCA disclaimer: "This research was supported (in whole or in part) by HCA Healthcare and/or an HCA Healthcare affiliated entity. The views expressed in this publication represent those of the author(s) and do not necessarily represent the official views of HCA Healthcare or any of its affiliated entities.". Other relationships: All authors have declared that there are no other relationships or activities that could appear to have influenced the submitted work.

All authors contributed to this manuscript. Nicholas Venuti is the article guarantor.

© Copyright 2022
Venuti et al. This is an open access article distributed under the terms of the Creative Commons Attribution License CC-BY 4.0., which permits unrestricted use, distribution, and reproduction in any medium, provided the original author and source are credited.