Cold agglutinin disease (CAD) is characterized by the agglutination of red blood cells (RBCs) when exposed to cold (usually in the extremities) and hemolytic anemia. Cold-sensitive antibodies are usually classified into three major classes: (a) Cold agglutinins are the immunoglobulins that attach to the antigens of RBCs causing them to agglutinate and hemolyze. This hemolysis is usually extravascular, leading to anemia without significant hemoglobinuria. (b) Donath-Landsteiner antibodies attach to RBC antigens at a cold temperature similar to cold agglutinins, but, in contrast to cold agglutinins, these antibodies fix complement leading to intravascular hemolysis and hence cause hemoglobinemia and hemoglobinuria. This is called paroxysmal cold hemoglobinuria (PCH). (c) Cryoglobulins are the third type of cold-sensitive antibodies that form immune complexes in the cold temperature and cause systemic vasculitis. These antibodies usually do not react with RBCs. Cold agglutinin-associated autoimmune hemolytic anemia (AIHA) can be primary (idiopathic) or secondary (due to viral infections, lymphoproliferative disorder, or autoimmune disorder) [1].

A 71-year-old Hispanic female presented to the emergency department with the complaint of generalized weakness for three days. The patient was referred to the emergency department by her primary care physician due to low hemoglobin of 5.1 g/dL on routine blood work. She denied any chest pain, palpitations, shortness of breath, dizziness, headache, rectal bleeding, dark stool, melena, hematochezia, hematemesis, epistaxis, hemoptysis, vaginal bleeding, nonsteroidal anti-inflammatory drugs (NSAIDs) consumption, hematuria, or easy bruising. The patient had medical comorbidities of hypertension, diabetes mellitus, hyperlipidemia, and obstructive sleep apnea, for which she was on lisinopril, metformin, and atorvastatin. The patient had a colonoscopy one year ago, which was unremarkable.

Upon presentation, the patient had a temperature of 98.6°F, blood pressure of 137/67 mmHg, a pulse of 83 beats per minute, and oxygen saturation of 100% on room air. On physical examination, the patient was alert and comfortable. Heart and lung sounds were unremarkable. The abdomen was soft and nontender. Initial laboratory findings were significant for severe macrocytic hemolytic anemia with hemoglobin of 5.1 g/dL, mean corpuscular volume (MCV) of 120 fL, and indirect hyperbilirubinemia of 3.3 mg/dL. The patient was also found to have a high reticulocyte count, high lactate dehydrogenase (LDH), and low haptoglobin. A direct Coombs test was sent given hemolytic anemia, which was positive for IgG-C3bC4d antibodies (Table 1). The fecal test was negative for any occult blood. Her cold agglutinin antibody testing revealed elevated antibody titers (1:610 at 4°C).

Table 1: Laboratory findings for the patient

The workup for secondary CAD disease was negative. Her serum Mycoplasma pneumoniae immunoglobulin M (IgM) and Epstein-Barr virus IgM were negative. Serum antinuclear antibodies (ANAs) were also reported to be negative. A computerized tomography scan of the chest and abdomen with contrast material was negative for any lymphadenopathy or mass to suspect lymphoma or malignancy. The patient was diagnosed with primary CAD; she was started on prednisone 40 mg twice daily. Her hemoglobin improved after she received two units of appropriately warmed packed RBCs transfusion. Repeat complete blood count showed improvement in hemoglobin to 8.0 g/dL (Figure 1). 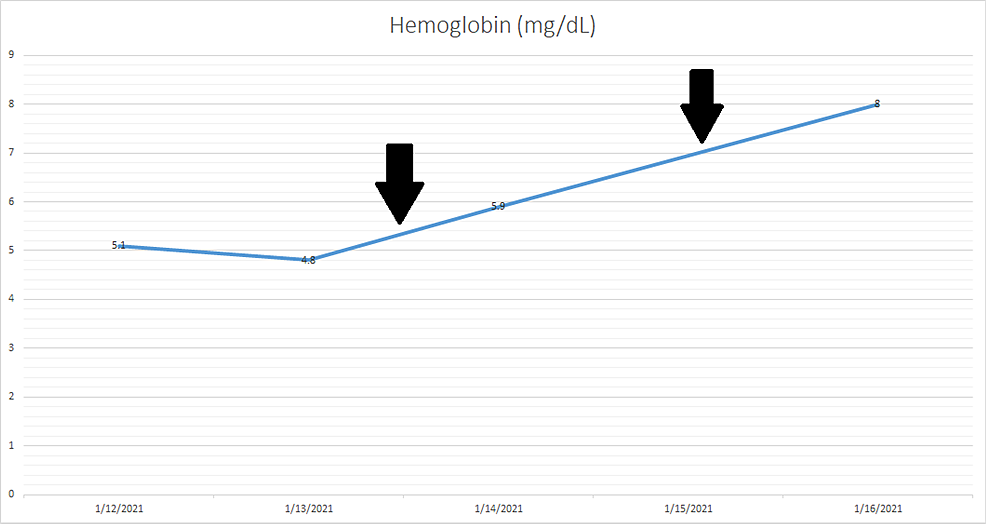 With improvement in her clinical status, she was discharged with outpatient hematology follow-up. She continues to follow-up in the clinic. Her prednisone dose has been gradually tapered down to 5 mg/day with stable hemoglobin counts.

Primary CAD is a rare disease. Berentsen et al. reported an incidence of one per million in a study done in Norway [2]. The median age of diagnosis is usually 60s to 70s. The surface of RBCs contains various antigenic epitopes. The antibodies (typically immunoglobulin M (IgM)) bind to these antigens in areas of the body with low temperature (usually extremities, especially when the ambient temperature is low) [3,4]. IgM then activates the complement system (classical pathway), which in turn stimulates the reticuloendothelial system leading to hemolysis [5]. The hemolysis in CAD is extravascular and is medicated by the complement system [6]. If RBCs are not phagocytosed by the reticuloendothelial system, IgM dissociated upon warming, but the complement mediators remain attached (especially C3d), which can be detected using the Coombs test [7]. A positive Coombs test is one of the initial tests to suggest CAD.

The clinical features of CAD vary from asymptomatic cases to severe anemia. Many individuals have circulating cold agglutinins in the blood but are unaware of this unless they are exposed to cold temperatures. There have been cases of severe hemolysis leading to multiorgan failure in patients with cold agglutinins who were exposed to therapeutic hypothermia (e.g., for cardiac surgery) [8]. The severity of hemolysis can range from compensated hemolysis without anemia to severe hemolytic anemia requiring transfusion [1]. Median hemoglobin levels are about 9 to 10 g/dL [3]. Cold-induced symptoms in the extremities (e.g., cyanosis, livedo reticularis, ulceration, Raynaud phenomenon, or discomfort on swallowing cold food) are extremely common in CAD [9].

The typical diagnostic approach starts with a complete blood count (CBC) and a peripheral blood smear review. The CBC may or may not show anemia depending upon the degree of hemolysis. Usually, the reticulocyte count is increased (could be normal if the hemolysis was recent or if there is an underlying bone marrow disorder). The lactate dehydrogenase (LDH) and bilirubin are increased, and the haptoglobin is decreased or absent. The direct Coombs test is positive for the C3b complement, while C3 and C4 were usually consumed [3]. The threshold for cold agglutinin titers is usually considered to be 64, but most experts consider titers above 512 to be diagnostic [5]. The specimen collected for cold agglutinin testing must be maintained at 37°C to 40°C until the formation and retraction of the clot; otherwise, the cold agglutinin precipitates and may be removed during the preparation of the sample. The following criteria are generally accepted for the diagnosis of CAD: (a) evidence of hemolysis (e.g., high reticulocyte count, high LDH, high indirect bilirubin, low haptoglobin), (b) positive direct antiglobulin (Coombs) test for C3d only (or, in the minority, C3d plus IgG), and (c) cold agglutinin titer of ≥64 at 4°C [10].

Secondary causes should be evaluated to rule out any underlying pathology responsible for CAD. If respiratory symptoms are present, testing for an infectious disorder (e.g., infectious mononucleosis, mycoplasma) is appropriate. Testing for an autoimmune disorder is recommended in those with features of autoimmune disorders (e.g., arthralgias, rash, or cytopenias). Testing for a lymphoproliferative disorder (e.g., non-Hodgkin lymphoma or Waldenstrom macroglobulinemia) is done if there is weight loss, hepatosplenomegaly, lymphocytosis, or cytopenias. Most cold agglutinins associated with infections or autoimmune disorders are likely to be polyclonal and will resolve spontaneously with a resolution of the infection (which may include antibiotic therapy) or treatment of the autoimmune disorder. Cold agglutinins associated with lymphoid are likely to be monoclonal and will not resolve spontaneously or respond to glucocorticoids or splenectomy. If these individuals have significant hemolysis, treatment will require therapy to eradicate the clone of cells producing the cold agglutinin.

In contrast to warm AIHA, CAD is not responsive to splenectomy or glucocorticoids, although cases have been successfully treated with steroids [11,12]. The cases which respond to the steroid therapy usually have one of the following features: (a) low antibody titers, (b) the antibodies have a higher thermal range causing some degrees of warm hemolysis, (c) mixed warm and cold AIHA, and (d) predominant antibodies are IgG cold-reacting antibodies [3,13]. An antibody titer less than 1,000 is usually considered to be a low titer [14]. Our patient had a titer of 1:610 and responded well to steroids.

CAD is an uncommon cause of hemolytic anemia. It can be primary (idiopathic) or secondary to other etiologies, including infectious disorder (e.g., infectious mononucleosis, mycoplasma), autoimmune disorders, lymphoproliferative disorder, or lymphoid malignancy. The secondary causes of CAD should be ruled out. All patients should avoid cold exposures until the underlying cause of CAD has resolved or been eliminated. Primary CAD is usually resistant to treatment with glucocorticoids, but there have been a few cases of CAD successfully treated with glucocorticoids.

© Copyright 2022
Haider et al. This is an open access article distributed under the terms of the Creative Commons Attribution License CC-BY 4.0., which permits unrestricted use, distribution, and reproduction in any medium, provided the original author and source are credited.

Table 1: Laboratory findings for the patient