Klebsiella ozaenae, a subtype of K. pneumonia, causes chronic upper respiratory tract infections, such as rhinitis and rhinoscleroma, and can also cause lethal infections. We report the case of a patient who developed pneumonia caused by K. ozaenae. An 87-year-old man presented to our hospital with fever and chills. Physical examination revealed no findings other than bilateral crackles in the lower lung fields. Chest computed tomography (CT) showed infiltrative shadows in the lower left lung field. Moreover, K. ozaenae was detected in blood cultures. Based on the examination results, including radiography and blood culture, the patient was diagnosed with pneumonia caused by K. ozaenae. On admission, the patient was treated with intravenous ceftriaxone (CTRX), but he did not recover. After determining the antibiotic susceptibility of K. ozaenae, we stopped administering CTRX and started ampicillin/sulbactam (ABPC/SBT) treatment for two weeks. During the ABPC/SBT administration, a second chest CT showed a new infiltrative shadow in the upper left lung field. Despite these findings, the patient was discharged from the hospital as his vital signs were stable and his general condition was good. After two weeks of ABPC/SBT treatment, the patient was switched to minocycline and followed up. Although infections caused by K. ozaenae are rare, they can be life-threatening. K. ozaenae identification in a patient’s blood culture indicates a potentially impaired immune system, prompting physicians to evaluate the patient’s immune system.

The genus Klebsiella consists of non-motile, facultatively anaerobic, gram-negative rods. The genus is a member of the Enterobacteriaceae family and belongs to the normal flora of the human mouth and intestine [1]. Patients with alcoholism are more likely to have established Klebsiella in the nasopharyngeal bacterial flora as chronic alcohol intake contributes to malnutrition, leading to the breakdown of local protective barriers in the respiratory tract [2,3]. When doctors diagnose and treat pneumonia, it is important that physicians ask the patient about their alcohol intake.

Of the pathogenic Klebsiella species, Klebsiella pneumoniae is the most prevalent. However, K. ozaenae is the causative pathogen of some rare diseases, including primary atrophic rhinitis [4]. Although K. ozaenae is a rare human pathogen that seldom causes serious infection [5,6], it can cause fatal diseases, such as sepsis, meningitis, and cerebral abscess [5-9]. Risk factors for K. ozaenae bacteremia include chronic rhinitis, old age, prior antibiotic usage, immunosuppression, malignancy, alcohol abuse, and diabetes mellitus [5]. K. ozaenae is rarely isolated and, to our knowledge, has not previously been reported to cause pneumonia. Here, we describe a case in which K. ozaenae caused pneumonia and sepsis in a patient without immunosuppression or diabetes mellitus.

A 65-year-old man with a history of chronic kidney disease, hypertension, and stable prostate cancer five years after radiation therapy presented to our hospital with a fever and chills. Two days prior to admission, he had undergone dermatological surgery to remove cysts on the abdominal wall, and cephalexin was administered. No abnormality was found at the surgical site. He had phlegm without coughing. He did not complain of any other symptoms, including respiratory difficulties, headache, vomiting, or dysuria. On examination, he had a temperature of 39.4°C, a heart rate of 97 beats/minute, a respiratory rate of 24 breaths/minute, and an oxygen saturation of 96% breathing room air. Auscultation revealed bilateral crackles in the lower lung fields. No other abnormalities were noted. Blood and sputum cultures were then performed to identify potential infectious pathogens. The laboratory test results showed a white blood cell count of 8,400 cells/µL with neutrophil dominance, hemoglobin, blood urea nitrogen, and creatinine levels of 13.2 g/dL, 25.6 mg/dL, and 1.64 mg/dL, respectively (Table 1). 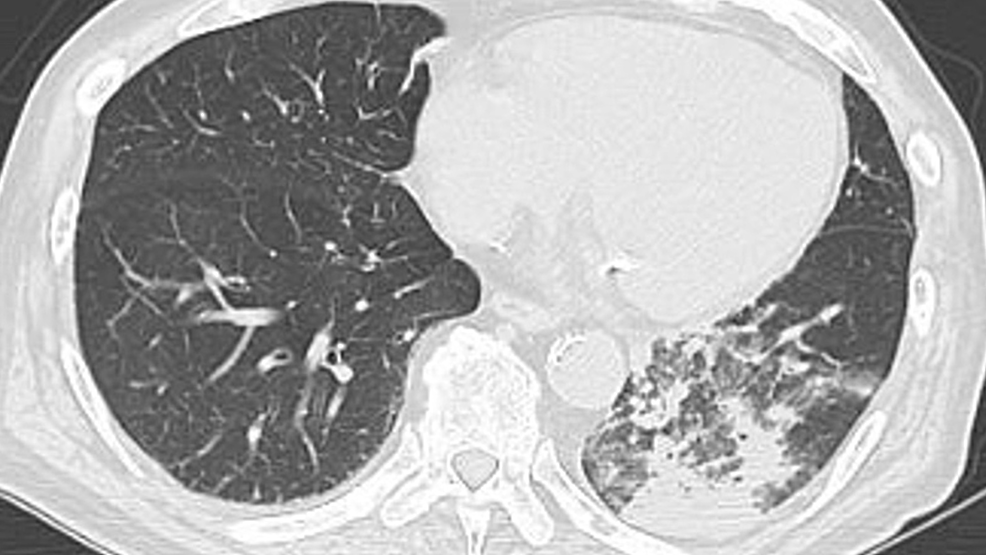 We diagnosed pneumonia based on the clinical findings. The CURB65 score was two points, and the patient was treated with ceftriaxone (CTRX, 2 g/day).

K. ozaenae was identified on blood culture, and Streptococcus mitis and Neisseria species were identified in sputum cultures four days after admission. The antibiotic susceptibility test revealed that the K. ozaenae isolate was resistant to CTRX (Table 2).

Therefore, the patient’s treatment was switched to ampicillin/sulbactam (ABPC/SBT). During ABPC/SBT treatment, the patient relapsed with fever but recovered, and 12 days after admission, a follow-up chest CT revealed that the opacity in the lower left lung lobe had improved, but a new opacity had developed in the left upper lung lobe (Figure 2). 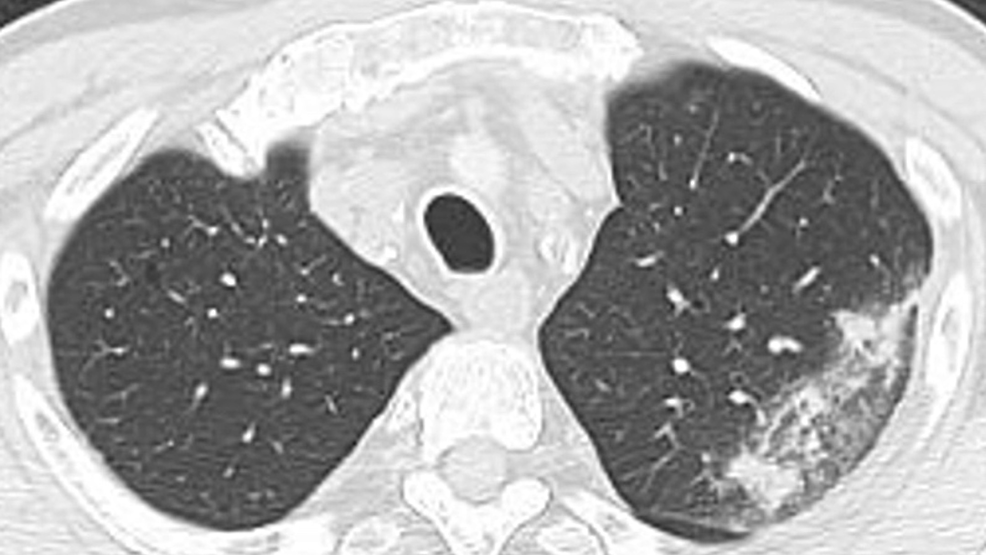 Figure 2: Second chest computed tomography scan revealing that opacity in the lower left lung lobe had improved but a new opacity had appeared in the left upper lung lobe.

However, K. ozaenae was not identified in an additional blood culture and sputum, and K. aerogenes, which was sensitive to ABPC/SBT and minocycline (MINO), was detected only in the sputum culture (Table 2). Because the opacities in the lower left lung lobe improved but remained, the glycoprotein Krebs von den Lungen-6 (KL-6) was measured to assess the presence of organizing pneumonia. ABPC/SBT was continued because KL-6 levels were within the normal range. After two weeks of ABPC/SBT treatment, the patient was in good general condition. Therefore, he was switched from ABPC/SBT to MINO and then discharged (Figure 3). 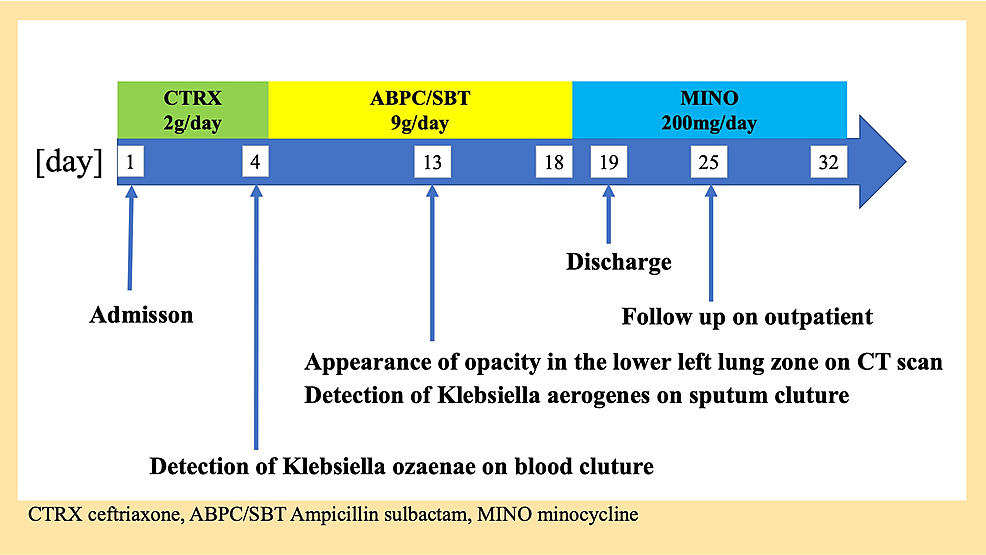 Figure 3: Clinical course of the case.

Six days after discharge, he was followed up, and his condition was stable. There were no abnormalities of note on examination, including auscultation. The patient was treated with MINO for two weeks.

The patient presented with pneumonia and bacteremia caused by K. ozaenae and was treated at our hospital. However, during treatment, he developed pneumonia in different lung areas caused by K. aerogenes, which differs from K. ozaenae. K. aerogenes and K. ozaenae are unusual human pathogens that rarely cause serious infections in healthy individuals. Immune system dysfunction was suspected in the patient, and K. ozaenae detection in blood cultures confirmed that the patient’s immune function could be impaired. We suggest that it is important to evaluate the immune function of a patient along with the treatment of the disease.

The diagnosis and treatment of pneumonia caused by K. ozaenae can be challenging. Our patient was diagnosed with pneumonia and bacteremia caused by K. ozaenae. We reached this diagnosis for three reasons. First, auscultation revealed crackles in the bilateral lower lung field areas, and chest CT revealed opacity in the left lower lung zone. Second, no other abnormalities were observed. Third, although K. ozaenae was not detected in the sputum, K. ozaenae was identified in the blood culture. This is why sputum classified into Group 3 by the Geckler classification was collected from the patient’s mouth where Streptococcus mitis and Neisseria species are normal commensal flora. In addition, despite being treated with CTRX, the patient did not recover. However, he recovered after switching the antibiotic treatment regimen to ABPC/SBT, an antibiotic to which K. ozaenae was susceptible.

The selection of antibiotics to treat K. ozaenae should be based on sensitivity, organ penetration, and host immunity. Although the patient improved during ABPC/SBT treatment, he had a relapse of fever, and a chest CT revealed a new opacity in the left upper lung zone. The relapse of symptoms was hypothesized to be due to the onset of pneumonia caused by K. aerogenes based on sputum culture results and his medical history including reduced kidney function. Reduced kidney function has been reported to be associated with an increased risk of serious infection in older individuals [10]. However, K. ozaenae might have caused pneumonia in this area either because ABPC/SBT was only partially effective, or because an abscess had formed; therefore, the ABPC/SBT treatment was considered ineffective. The causes of a partial response to antibiotic therapy consist of three aspects: the antibiotic, the target pathogen, and the patient’s body system. These aspects include the bacterial status, inoculum size, antibiotic concentrations, serum effects, and host-gut microbiome interactions [11]. However, we ruled out these hypotheses because K. ozaenae was not detected in the later cultures and because the second chest CT revealed that opacity in the lower left lung zone had improved. K. aerogenes infection can cause pneumonia, immunodeficiency, and nosocomial infections.

Patients’ immune function should be considered if K. ozaenae is detected on blood culture. Despite presenting with pneumonia and bacteremia, our patient did not have evidence of an inflammatory reaction, such as an elevated white blood cell count. These findings suggest that he had a dysfunctional immune system [12]. Moreover, compared with immunologically healthy individuals, patients with immune dysfunction are susceptible to infection by organisms of low native virulence or experience increased severity of common infections [13].

© Copyright 2022
Tachibana et al. This is an open access article distributed under the terms of the Creative Commons Attribution License CC-BY 4.0., which permits unrestricted use, distribution, and reproduction in any medium, provided the original author and source are credited.

Figure 2: Second chest computed tomography scan revealing that opacity in the lower left lung lobe had improved but a new opacity had appeared in the left upper lung lobe.

Figure 3: Clinical course of the case.