The standard of care for locally advanced nasopharyngeal carcinoma (NPC) is concurrent cisplatin chemoradiotherapy. Neoadjuvant chemotherapy can be administered to downsize tumors before concurrent treatment to optimize radiation volumes. Our hypothesis was that the use of cisplatin in the neoadjuvant phase could limit the amount of cisplatin that patients could tolerate in the concurrent phase of treatment.

This is a retrospective analysis of Canadian NPC patients who received neoadjuvant chemotherapy with the intention to downsize locally advanced tumors prior to concurrent cisplatin plus radiation. Baseline demographic and treatment data were obtained from institutional databases and chart review; all data were analyzed with SPSS (SPSS Inc. Released 2005. SPSS for Windows, Version 14.0. Chicago: SPSS Inc.) Overall survival (OS), disease-specific survival (DSS), and local/regional relapse-free survival (LRRFS) were analyzed using Kaplan-Meier survival functions. Univariate and multivariate models were used to determine factors associated with the total dose of concurrent chemotherapy.

Radiotherapy is the mainstay of treatment for nasopharyngeal carcinoma (NPC) [1-2]. Doses of 70 Gy directed to the primary tumor and involved lymph nodes have been recognized as a curative treatment protocol. In the locally advanced setting, concurrent chemoradiotherapy is the standard of care based on Phase III trials conducted in both North America and Asia that demonstrated a significant survival benefit [3-4]. The most common radiosensitizing agent is cisplatin delivered at 40 mg/m2 weekly or 100 mg/m2 every three weeks. The roles of neoadjuvant and adjuvant chemotherapy remain controversial, with conflicting results throughout the literature [1,5-9].

Neoadjuvant chemotherapy has been used for locally advanced presentations of NPC. The proposed benefits of neoadjuvant chemotherapy in this setting are to downsize the tumor prior to radiation and to treat microscopic metastatic disease. In bulky Stage III and Stage IV-A and IV-B tumors, encompassing the gross tumor volume (GTV) with a curative dose of 70 Gy may prove challenging due to the proximity of dose-limiting structures, such as the spinal cord, brain stem, brain, and optic structures. Downsizing from neoadjuvant chemotherapy may help shrink the tumor away from dose-limiting critical structures and, therefore, facilitate radiation delivery and reduce the risk of significant morbidity or even mortality.

At the British Columbia Cancer Agency (BCCA), selected patients with bulky NPC primary tumors at diagnosis have been treated with the neoadjuvant chemotherapy phase prior to definitive concurrent chemoradiation. We conducted a retrospective analysis to identify all such patients and report on the clinical outcomes. The primary objectives were to present a Canadian experience with neoadjuvant chemotherapy and to characterize the subsequent ability to complete the intended and prescribed concurrent chemotherapy during radiation. The secondary objectives were to report the disease recurrence and survival outcomes for the patients treated.

A retrospective review was conducted of patients diagnosed with NPC treated at the BCCA from January 1, 2000, to December 1, 2013, who received chemotherapy prior to planned curative intent concurrent chemoradiation treatment. The BCCA has six regional centers and provides comprehensive oncologic care to a population of 4.5 million people, which includes chemotherapeutic drugs and all radiation therapy. This large population and single radiation provider allow for prospective data capture on treatments and outcomes for a population-based assessment of outcomes.

The study was reviewed and approved by the BCCA Research Ethics Board.

From January 2000 to December 2013, 428 cases of NPC were identified at the BCCA. Of these, 46 patients fit the inclusion criteria of receiving neoadjuvant chemotherapy prior to planned concurrent chemoradiotherapy. The baseline characteristics of the 46 patients, including demographic and tumor staging information, are found in Table 1. The majority of patients were male, of Asian ethnicity, and had T3 or T4 tumors with involved nodes.

Treatment details are outlined in Table 2. The most common neoadjuvant chemotherapy combination was cisplatin and gemcitabine. The median dose of neoadjuvant cisplatin was 160 mg/m2 (range, 24 mg/m2 to 325 mg/m2). Forty-three patients were scheduled to receive cisplatin 40 mg/m2 weekly for seven cycles, and three patients were scheduled to receive cisplatin 100 mg/m2 every three weeks for three cycles. Of the 46 patients, 52% received all planned concurrent cisplatin. The median dose of concurrent cisplatin was 195 mg/m2 (range, 67 mg/m2 to 397 mg/m2). Twenty-one of 46 patients received ≤ 200 mg/m2 concurrent cisplatin, including four patients who did not receive any of the concurrent phase planned cisplatin. Some patients who received less than 70 Gy were due to the proximity of the tumor to organs of interest (OARs); no patient stopped radiation treatment early due to toxicity. One patient declined radiation due to fear of potential side effects.

Of the 46 patients who received neoadjuvant chemotherapy, 45 went on to receive radiation therapy. One patient refused any radiation treatment after the neoadjuvant treatment phase. All were given radical radiotherapy courses, but there was some variability in the dose and fractionation based on provider choice and patient-specific factors. Radiation doses ranged from 56 Gy to 70 Gy in 25 to 36 daily fractions (Table 2). The most common dose fractionation was 70 Gy in 35 fractions for 33 patients (72%).

Median follow-up was 2.6 years with a range of 0.2 years to 10 years. Seven patients died during follow-up, and the three-year overall survival (OS) was 83% (Figure 1). There were six deaths due to NPC, and the three-year DSS was 86% (Figure 2). Nine patients had documented local or regional recurrences following treatment with a three-year LRRFS of 74% (Figure 3). 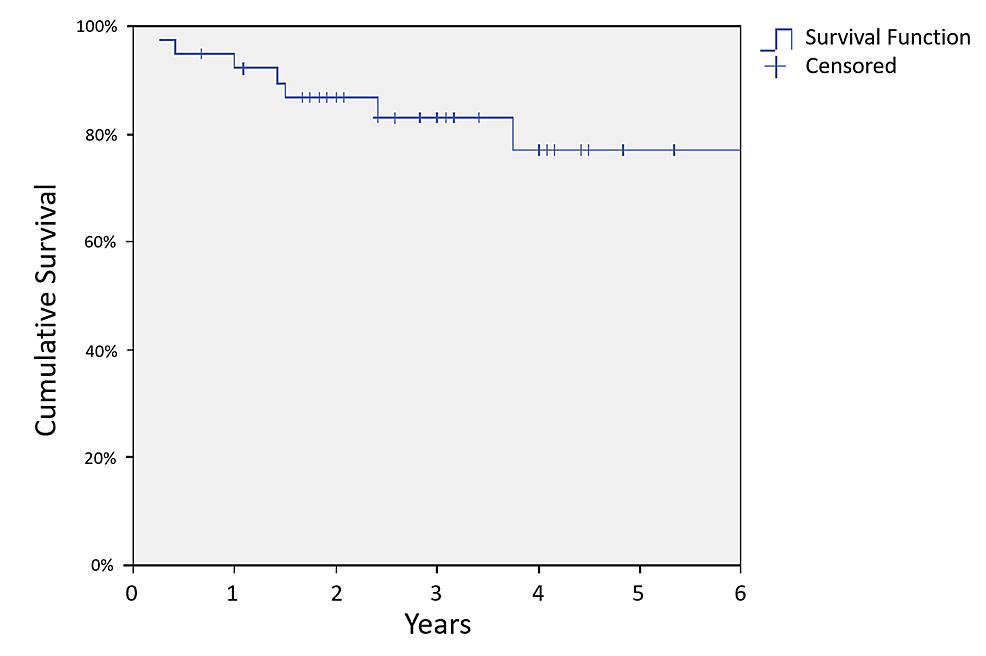 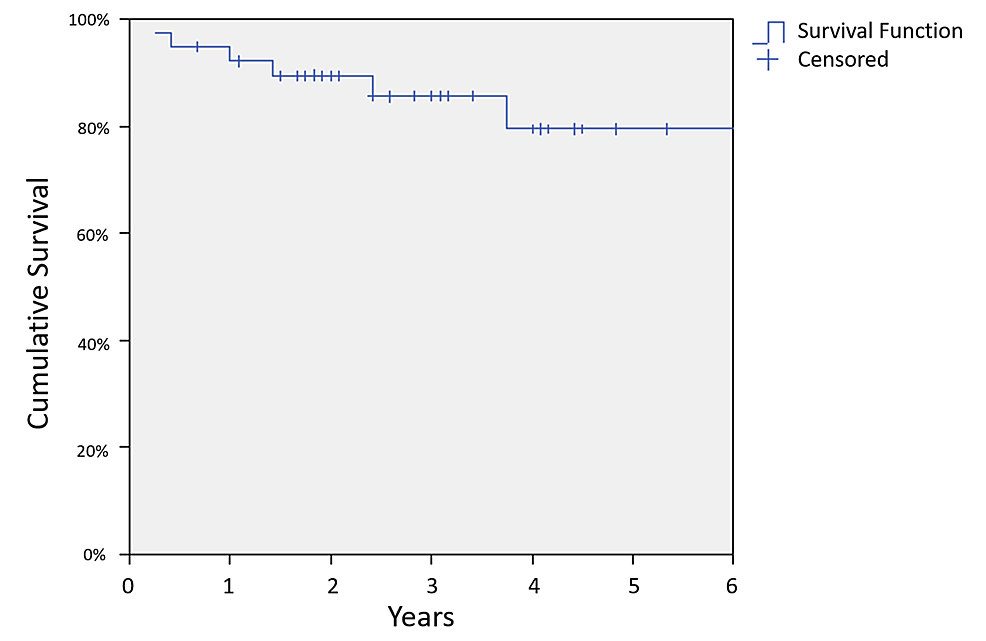 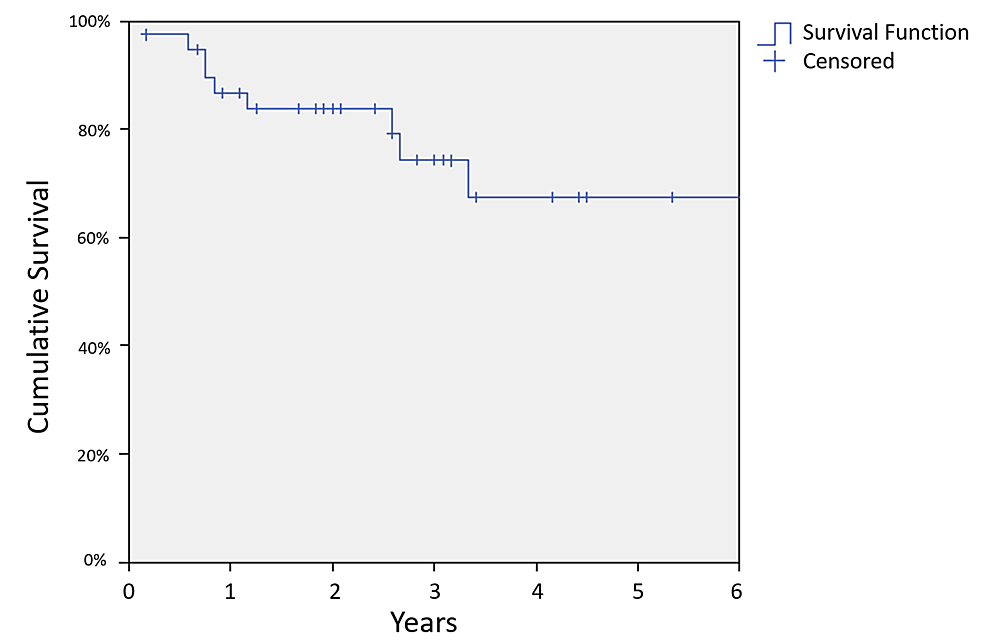 Neoadjuvant regimens for NPC are typically platinum-based combinations. The goal of therapy includes reducing the primary tumor and controlling the microscopic metastatic disease. Multiple Phase II trials have been conducted using cisplatin in combination with anthracyclines, taxanes, and anti-metabolites [7-8,10-11]. The total dose of neoadjuvant cisplatin in these studies ranged from 150 mg/m2 to 240 mg/m2 with a concurrent component total dose of 150 mg/m2 to 300 mg/m2. Despite these cumulatively high doses of cisplatin, compliance with therapy was reported to be high in these patients selected for the clinical trial.

Nephrotoxicity, neuropathy, and ototoxicity have been recognized as treatment-limiting side effects with cisplatin. A cumulative dose of cisplatin of over 400 mg/m2 via bolus administration or concurrent delivery with radiotherapy is known to increase the likelihood of developing these side effects. Established predictive patient factors include increased age and female sex. In our study, the dose of concurrent cisplatin was not negatively impacted using neoadjuvant treatment despite the anticipated higher risk of toxicity. Like other studies, however, male sex appears to be predictive of the ability to receive higher doses of concurrent cisplatin.

It is difficult to compare survival outcomes from different studies due to the subgroup of bulky tumors that were selected for this treatment at our center, but the three-year OS rate of 83% for locally advanced NPC is comparable to several Phase II clinical trials of neoadjuvant chemotherapy prior to radical treatment for NPC [7-8]. Neoadjuvant chemotherapy for NPC has been evaluated prospectively among few patients. Hui et al. reported on a Phase II trial of 65 patients randomized to neoadjuvant treatment for Stage III and IV-B NPC followed by chemoradiation in Hong Kong. The three-year progression-free survival (PFS) reported for neoadjuvant versus control was 88.2% and 59.5%, and the three-year OS for neoadjuvant versus control was 94.1% and 67.7%, respectively [8]. Kong et al. in Shanghai reported on three-year PFS and OS for 52 patients with Stage III NPC and 64 patients with non-metastatic Stage IV NPC all treated with neoadjuvant chemotherapy followed by concurrent chemoradiation. They report a three-year PFS at 78.2% and 85.1% for Stage III and IV patients, respectively. The three-year OS in this trial was 94.8% and 90.2% for Stage III and IV patients, respectively [7]. However, in these two trials, a bulky primary tumor was not part of the inclusion criteria. Nonetheless, these results are comparable to our results. A previous retrospective analysis by Hamilton et al. of NPC patients at the BCCA reported five-year survival outcomes for Stage III and IVB patients at close to our three-year survival results [12].

© Copyright 2018
Maas et al. This is an open access article distributed under the terms of the Creative Commons Attribution License CC-BY 3.0., which permits unrestricted use, distribution, and reproduction in any medium, provided the original author and source are credited.