Background: Ventilator-associated pneumonia (VAP) is one of the most common infections in intubated intensive care unit (ICU) patients. Oral care with chlorhexidine is a conventional method for maintaining hygiene. Recently, adjuvant methods have been introduced into routine oral care, including teeth brushing and the application of moisturizing lotion. The objective of this study was to compare the incidence of VAP in critical care patients receiving oral care with and without manual teeth brushing and the application of moisturizers to the mouth.

Methods: We conducted a prospective randomized control study comprised of 220 ICU patients between 18 and 65 years of age, and of either sex. The patients were divided into two groups of 110 each. Care for the study group (group S) consisted of chlorhexidine wash, tooth brushing, and moisturizing gel over gums, buccal mucosa, and lips. The control group (group C) was treated with chlorhexidine wash only. The oral assessment was done at 4, 6, 8, and 12 hours using the Beck Oral Assessment Scale (BOAS). Pneumonia was assessed based on abnormal chest x-rays, fever, chest auscultation, endotracheal culture report, and the incidence of VAP, and mortality was observed

Ventilator-associated pneumonia (VAP) is defined as pneumonia that develops at least 48 h after endotracheal intubation and initiation of mechanical ventilation [1]. VAP is the second most common nosocomial infection after urinary tract infection and the most common infection in mechanically ventilated intensive care unit (ICU) patients [2]. VAP is a major medical problem with a mortality rate between 33% and 50% [3].

The endotracheal tube (ETT) acts as a pathway for spreading pathogenic bacteria from the oral cavity. Microaspiration of pharyngeal secretions may occur due to improper sealing of the ETT cuff in ventilated patients. Microaspiration can cause nosocomial pneumonia [4]. Poor oral health is a common problem in mechanically ventilated patients [5]. Dental plaque is an archetypal biofilm, which is rapidly colonized by potential respiratory pathogens in critically ill patients; thus, dental plaque is a reservoir for VAP pathogens [6-9]. Dental plaque is increased and forms faster in ICU patients compared with other patients [10]. The oral flora changes in the first 48 h of hospitalization and is replaced mainly by Gram-negative organisms. The growth of these organisms leads to dental plaque formation [11]. The accumulation of aerobic and anaerobic microorganisms contributes to the growth of plaque mass. Colonization by Gram-negative bacteria is crucial to the accumulation of oral and pharyngeal bacteria [12,13]. The bacteria in dental plaque cause ventilator-associated pneumonia (VAP) [10,14].

Randomized clinical trials demonstrated that improving oral hygiene reduces VAP and mortality [15-17]. However, these trials did not measure oral cleanliness. Furthermore, a paucity of research conducted in mechanically ventilated patients has focused on the optimal methods for improving oral hygiene [18]. According to Eilers’s Oral Assessment Guide, numerous commercially available oral care products, such as manual and electric toothbrushes, dentifrices, oral moisturizing agents, and a variety of oral swabs and solutions, are available [19]. The effectiveness of most of these products and methods on oral health is not well known, especially in the context of intubated patients. Routine oral hygiene is encouraged in mechanically ventilated patients to reduce VAP incidence, but evidence supporting specific strategies is limited.

The Institutional Ethics Committee of King George's Medical University (KGMU) approved this study (reg. no.: ECR/262/Inst/UP/2013/RR-19). This randomized control study was conducted in ICU patients at King George's Medical University over one year (May 2019 to April 2020). Incidence of VAP, mortality, and duration of hospital stay were compared between groups. The inclusion criteria were ICU patients aged 18-65 years of either sex with oral ETT in situ. The exclusion criteria were more than 48 hours of mechanical ventilation before ICU admission, previous history of respiratory illness, immunocompromised, ongoing sepsis, pregnancy, and lack of denture. After strictly following the inclusion and exclusion criteria, 220 ICU patients were enrolled in the study. Sample size was calculated on the basis of the rate of ventilator-associated pneumonia before and after the intervention using the following formula.

Here, p1=0.012 is the rate of ventilator-associated pneumonia before the intervention, p2=0.008 is the rate of ventilator-associated pneumonia after the intervention [20]. Coefficients difference e=0.9 is considered to be clinically significant, type 1 error (α=5%), type 2 error (β=20%) for setting power of study 80%, the minimal sample size is calculated to be n=215. Randomization and follow-up of the cases in the study are shown in the consort diagram (Figure 1). 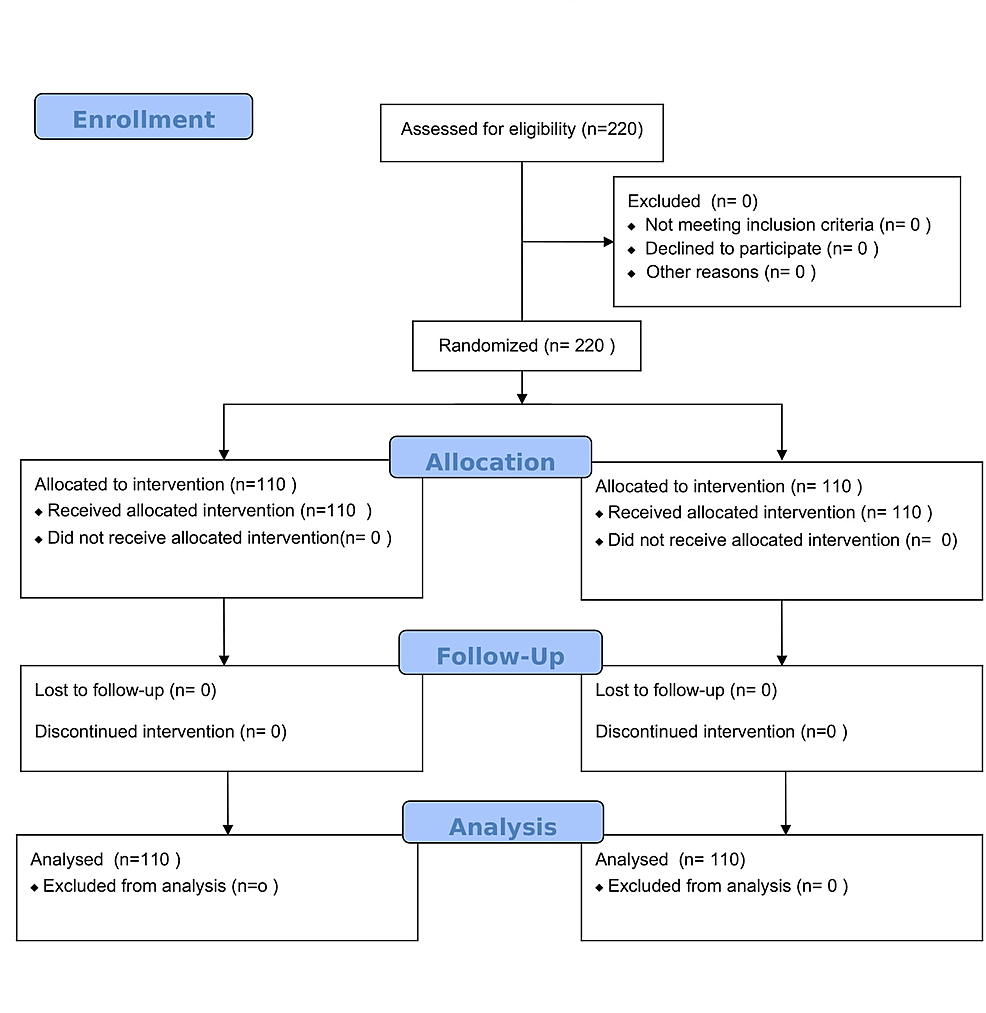 Randomization was done using a computer-generated random number. First time, the Beck Oral Assessment Scale (BOAS) score was taken at four hours, so this can be considered as baseline. The following interventions were performed twice a day in group S: the ETT cuff pressure was maintained between 20 and 25 mmHg by using Posey Portex ET tube cuff manometer (Karnataka, India: Alpha Biomedix); the head end of the bed was elevated 30°-45°; deep mouth and throat suctioning were performed; oral hygiene was maintained by brushing the outer and inner surfaces of teeth, gums, and tongue using a baby brush with antimicrobial chlorhexidine 0.2%; moisturizing gel containing aloe vera and peppermint oil was applied over the oral mucosa, gums, and tongue and petroleum jelly was applied to the lips; and the airway was examined, any obstructions were removed, and if necessary, the tube was changed. In group C, all routine oral care was performed as in the study group except manual tooth brushing; application of moisturizing gel over the oral mucosa, gums, and tongue; and application of petroleum jelly to the lips (Table 1).

The table is obtained with permission from Gupta et al. [22].

Statistical analyses were performed using Statistical Package for Social Sciences (SPSS) version 21.0 statistical analysis software (Armonk, NY: IBM Corp.). The values are represented as numbers (%) and mean ± SD. The sample size was calculated based on an α risk of 0.05 and β risk of 0.20 (80% power of the study). Comparisons between groups at different time intervals were assessed using Student’s t-test. All categorical data were compared using chi-square tests. A p ≤ 0.05 was considered statistically significant.

Demographic profiles were comparable in both groups (p=0.796). All patients received 0.2% chlorhexidine mouthwash at regular intervals, starting from admission into the ICU and repeated every day for up to five consecutive days. Of the 220 patients enrolled in the study, 110 (50.0%) patients were in group S and 110 patients were in group C. The demographic profiles were similar between the groups (p = 0.796) (Table 3).

Table 3: Comparison of demographic profiles between the groups in study population

Table 4: Comparison of prevalence of different comorbidities between the groups in study population

Table 5: Comparison of comorbidities between the groups in study population

Table 6: Comparison of incidence of fever between the groups in study population

Table 7: Comparison of oxygen saturation level between the groups in study population

Table 9: Comparison of investigation findings between the groups in study population

Table 10: Comparison of final outcome between the groups in study population

Table 11: Length of ICU stay and number of days of mechanical ventilation

According to the CDC guidelines, we included patients in whom VAP was suspected based on the new onset of abnormal chest x-rays, fever, chest auscultation, positive ETT cultures, or increased ventilator demand. We suspected VAP in 29% of patients in group S and 47.3% of patients in group C. The prevalence of VAP was significantly higher in group C compared with the prevalence in group S. Atashi et al. showed that the incidence of pneumonia in the study group was lower but not statistically different from the incidence in the control group [25]. Various studies, including Fourrier et al. in 2000, Houston et al. in 2002, Grap et al. in 2004, and Koeman et al. in 2006, support our results [26-29]. These studies all demonstrated that the rate of VAP was reduced in the intervention group compared with the rate in the control group. However, Lorente et al. found no significant difference in the two groups [23].

The present study has some limitations. Our study was performed in a single ICU. Therefore, the results may vary at different ICUs, and the results cannot be applied uniformly. For those patients who were admitted from outside, the history of previous antibiotic use and the guidelines for intubation were unavailable. A further limitation of the study is that the VAP diagnostic procedure was not invasive; we used only tracheal aspirate samples.

VAP is a major clinical problem for critically ill patients. Further research to prevent VAP is needed. Based on the results of our study, we conclude that tooth brushing along with oral care provides an additional advantage in preventing VAP in patients on mechanical ventilation. Different studies on tooth brushing might yield different results, and more studies are needed to formulate evidence-based guidelines for oral care to minimize the incidence of VAP. Compulsory tooth brushing decreased not only the number of VAP patients but the length of ICU stays and the ventilator time. Finally, mortality was lower in patients who received tooth brushing along with oral care.

© Copyright 2022
Singh et al. This is an open access article distributed under the terms of the Creative Commons Attribution License CC-BY 4.0., which permits unrestricted use, distribution, and reproduction in any medium, provided the original author and source are credited.

The table is obtained with permission from Gupta et al. [22].

Table 3: Comparison of demographic profiles between the groups in study population

Table 4: Comparison of prevalence of different comorbidities between the groups in study population

Table 5: Comparison of comorbidities between the groups in study population

Table 6: Comparison of incidence of fever between the groups in study population

Table 7: Comparison of oxygen saturation level between the groups in study population

Table 9: Comparison of investigation findings between the groups in study population

Table 10: Comparison of final outcome between the groups in study population

Table 11: Length of ICU stay and number of days of mechanical ventilation