H syndrome is an autosomal recessive multisystemic disease with a very low prevalence rate, characterized by indurated cutaneous hyperpigmentation, hypertrichosis, and various systemic manifestations. The syndrome is caused by mutations in SLC29A3 gene on chromosome 10q23, encoding for human equilibrative transporter 3 (hENT3). So far, only 100-120 patients with H syndrome have been described in the literature, with predominance among Indian, North-American, and Arab ethnicities.

H syndrome is an extremely rare autoinflammatory condition that has a complex constellation of pleiotropic manifestations with multisystemic involvement. And while further identification and better pathophysiological understanding of H syndrome are needed, physicians worldwide should be vigilant about the overlapping features of H syndrome with many other rheumatological, cutaneous, and genetic diseases.

Since first reported in 2008 [1], H syndrome is considered to be a very rare condition to encounter with only 100 cases reported in world literature [3]. The defective gene in H syndrome (SLC29A3) encodes the hENT3. And while multiple mutations have been denoted, it is well comprehended now that hENT3-related spectrum disorders share a common mutation with vast and overlapping clinical and multisystemic manifestations, as this transporter is involved with passive sodium-independent transportation of nucleosides and considered critical for nucleotides synthesis via salvage pathways [4].

We report the case of a 30-year-old Sudanese male born of a second-degree consanguineous marriage presenting to our causality with generalized fatigability, malaise, fever, and multiple painful, tender joints. The patient’s condition started as early as 14 years prior to presentation, with him developing painless, indurated, well-circumscribed, non-pruritic areas of hyper-pigmentation and marked hypertrichosis limited in the upper medial aspect of the thigh. The hyperpigmented plaques gradually enlarged over a period of six years, during which the patient was free of rheumatological symptoms but suffered unexplained iron deficiency anemia for which he had oral tonic therapy on a regular basis and received blood transfusion therapy on multiple occasions.

Six years ago, the patient started developing multiple bouts of severe joint pain, swelling, tenderness, warmth, and restriction of mobility, mainly involving the small joints of the hands, wrists, and ankle joints. The arthropathy was bilateral, symmetrical, and had a relapsing-remitting course, worsened by stillness and associated with marked fatigability, unexplained fever, and a worsening flexure deformity of the toes. There was also a progressive increase in the surface areas covered by the hyperpigmented plaques to involve the posterior aspect of the thighs, buttocks, back, and legs. Systemic steroid therapy was introduced but came off short.

On examination, the patient had low-for-age stature, with anthropometric measurements of 150 cm height (-2.4 from standard deviation), 96 kg weight, and a BMI of 38 kg/m2 (obese -Class II)

A well‑defined, bilateral, hyperpigmented, warm-to-touch, indurated plaques with hypertrichosis present over medial, lateral, and posterior aspects of thighs and legs sparing knees and feet were noticed (Figure 1a, 1b, 1c). 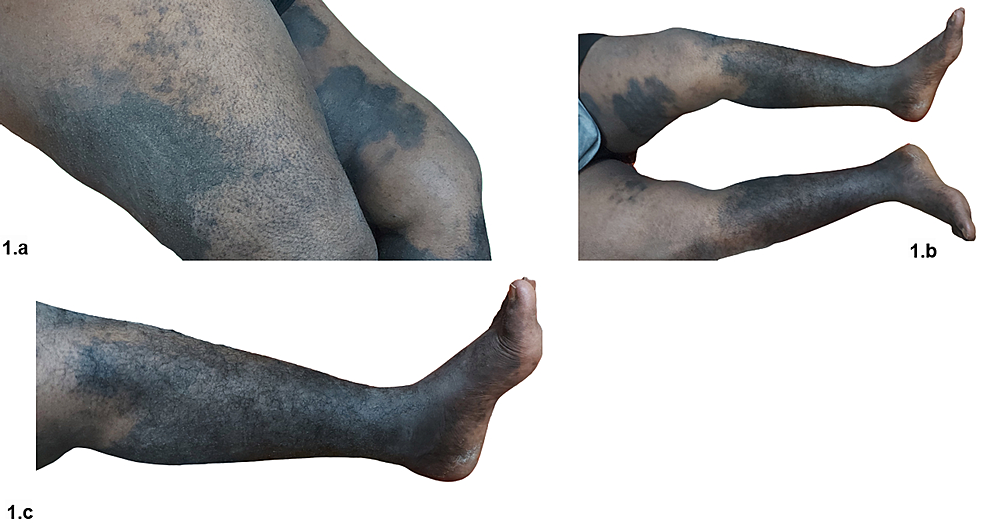 Figure 1: Large, bilateral, irregularly bordered hyperpigmented plaques with hypertrichosis and induration, over the medial and posterior aspect of the thighs (a), anterior, medial, and posterior aspects of the legs (b), with knee and foot sparing (b, c)

The patient also exhibited marked high-arched feet (Figure 2a, 2b), fixed flexure deformity of the toes, and a mild degree of hallux valgus (Figure 2c). 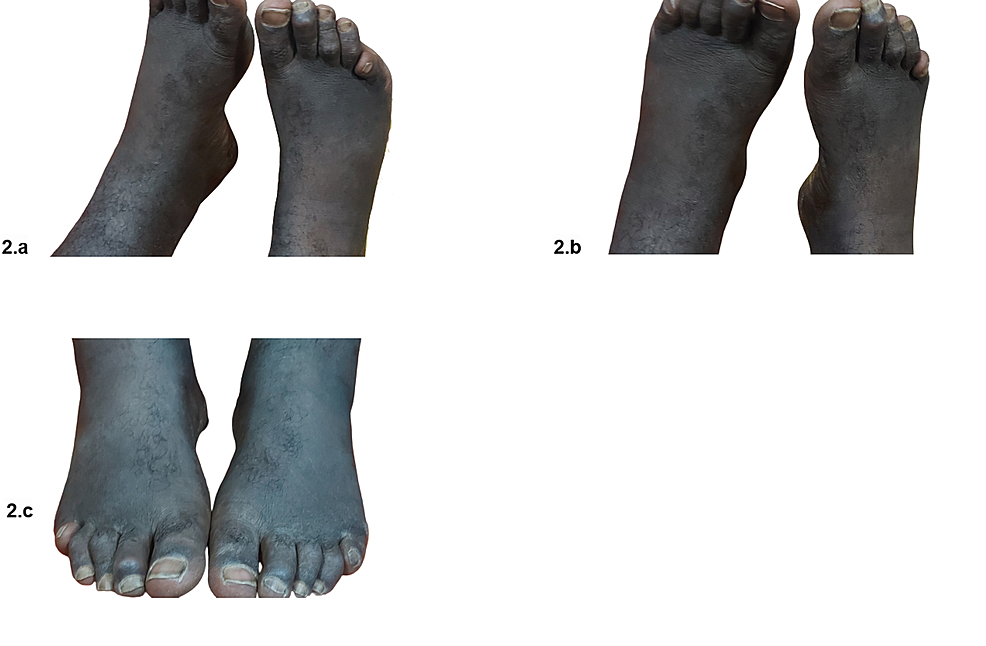 Figure 2: Marked high-arched feet (a, b), fixed flexion deformity of the toes (c), and a mild degree of hallux valgus (c)

Table 1: Immunological profile of the patient

H syndrome is an extremely rare entity that is autosomal-recessively inherited and presents with a variety of multisystemic manifestations and overlapping features with various other conditions. So far, it is estimated that there is a total number of near 100-120 cases worldwide since the first reported in 2008 [1,3,5], with an estimated incidence rate of less than 1 in 1,000,000 [6].

The condition is caused by a mutation in the solute carrier family 29 (nucleoside transporters), member 3 (SLC29A3) gene, which encodes for the hENT3 [4,7]. hENT3 is a nucleoside transporter that functions in transporting nucleosides through a passive sodium-independent process, a crucial step for nucleotide synthesis via salvage pathway [8]. With near 20 mutations found to be affecting SLC29A3 gene, the association of this gene with various clinical conditions has been described recurrently in the previous literature to include genodermatosis, Faisalabad histiocytosis, Rosai-Dorfman disease (RDD), and H syndrome [1,2,7-10]. And though marked interfamilial and intrafamilial clinical variability was noticed on multiple occurrences, reported mutations involving SLC29A3 gene are considered to have no genotype-phenotype correlation [11].

Most of the reported cases of H syndrome were from Asian, Arabian, Persian, Hispanic, and Caucasian ethnicities [5,11-13], And so far, to the best of our knowledge, this is the first case of H syndrome reported in the literature presented in a patient of African ethnicity. And while the patients we are reporting exhibited near (95%) to the common findings of H syndrome described in the literature including hyperpigmentation (68%), hypertrichosis (68%), short stature (49%), hypogonadism (6%), splenomegaly (43%), heart anomalies (34%), hematological abnormalities, arthritis (8%), foot deformity (20%), hallux valgus (20%), flexion contractures of toes (56%), exophthalmos (28%), and gynecomastia [1,11,12], in addition to the characteristic histological finding of H syndrome, genetic diagnosis, which was logistically burdensome to obtain in our low-resource settings, is strongly advised for further confirmation of the diagnosis and for genetic and familial counseling and support.

The differential diagnosis for such concurrent clinical findings is quite a few, and one must rule out common conditions known to be associated with SLC29A3 mutations, with especially RDD and Faisalabad histiocytosis having the most overlapping features with H syndrome [14,15]. Both are to be excluded, by the absence of the characteristic generalized lymphadenopathy in our patient [14,16,17]. In the same way, one could easily exclude POEM syndrome by the absence of polyneuropathy [18], and localized fibrosing disorders (morphea, scleroderma, and regional fibrosis) by the irrelevant immune profile and histological findings of our patients [19].

H syndrome is a very rare condition with very few reports in the literature, and so far, this is the very first case report of H syndrome encountered in African ethnicity. The phenotypical variation, the vast clinical variability, and the complex overlap of H syndrome with various syndromes and other medical conditions make it one of the very tough cases to pick up during practice. For this, physicians should be very vigilant and sharp-eyed for more accuracy of diagnosis, more effective management, better outcome, and proper counseling and support.

© Copyright 2022
Elmansour et al. This is an open access article distributed under the terms of the Creative Commons Attribution License CC-BY 4.0., which permits unrestricted use, distribution, and reproduction in any medium, provided the original author and source are credited.

Figure 1: Large, bilateral, irregularly bordered hyperpigmented plaques with hypertrichosis and induration, over the medial and posterior aspect of the thighs (a), anterior, medial, and posterior aspects of the legs (b), with knee and foot sparing (b, c)

Figure 2: Marked high-arched feet (a, b), fixed flexion deformity of the toes (c), and a mild degree of hallux valgus (c)

Table 1: Immunological profile of the patient