Clostridium perfringens (CP) bacteremia is a rare but rapidly fatal infection. Only 36 cases of CP bacteremia with gas containing liver abscesses on image studies have been reported in the literature since 1990. In this report, we describe a 65-year-old diabetic male with CP bacteremia which progressed into fulminant hepatic failure with subsequent fatal cerebral edema.

Clostridium perfringens (CP) bacteremia has been described as a rare and rapidly fatal disease secondary to massive hemolytic anemia, resulting in progressive multi-organ failure. The mortality rate exceeds 80% despite high-dose intravenous antibiotics and source control [1]. It is commonly associated with diabetes, malignancy, and immunosuppression [2]. In this report, we present a 65-year-old diabetic male with CP bacteremia which progressed into fulminant hepatic failure with subsequent fatal cerebral edema.

A 65-year-old male with a history of diabetes mellitus and coronary artery disease presented to an outside hospital emergency department with an one-day history of abdominal pain. He was febrile to 101.3 °F with leukocytosis of 32K/µL, elevated transaminases and hyperbilirubinemia (total bilirubin of 7.8 mg/dL). The working diagnosis was cholangitis. The patient was started on broad-spectrum intravenous antibiotics, and transferred to our hospital for endoscopic retrograde cholangiopancreatogram (ERCP) and further management.

The ERCP revealed no evidence of biliary duct obstruction (Figure 1), and a non-obstructing biliary stone was found in a duodenal diverticulum associated with the major papilla (Figure 2). A computed tomography (CT) scan of the abdomen and pelvis was obtained which showed multiple hepatic abscesses containing air fluid levels involving the right hepatic lobe. These abscesses were not amenable to percutaneous drainage (Figure 3). Due to concerns of gaseous organism infection, repeat ERCP with sphincterotomy and stent placement were performed with the intention of source control. Blood culture from the outside hospital returned as Clostridium perfringens. 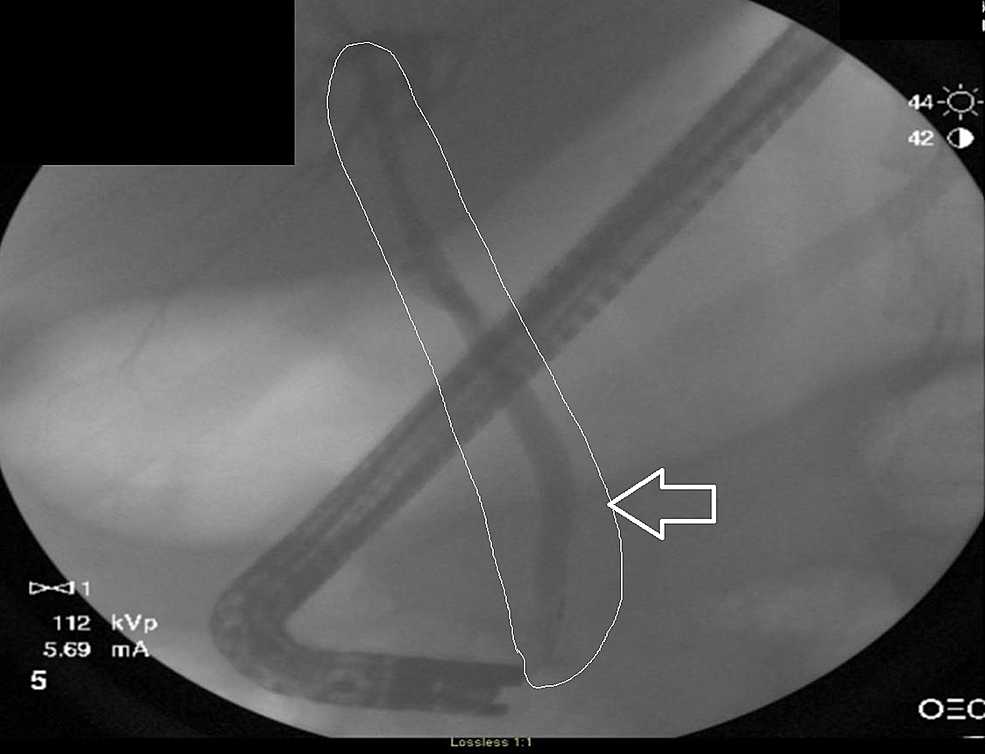 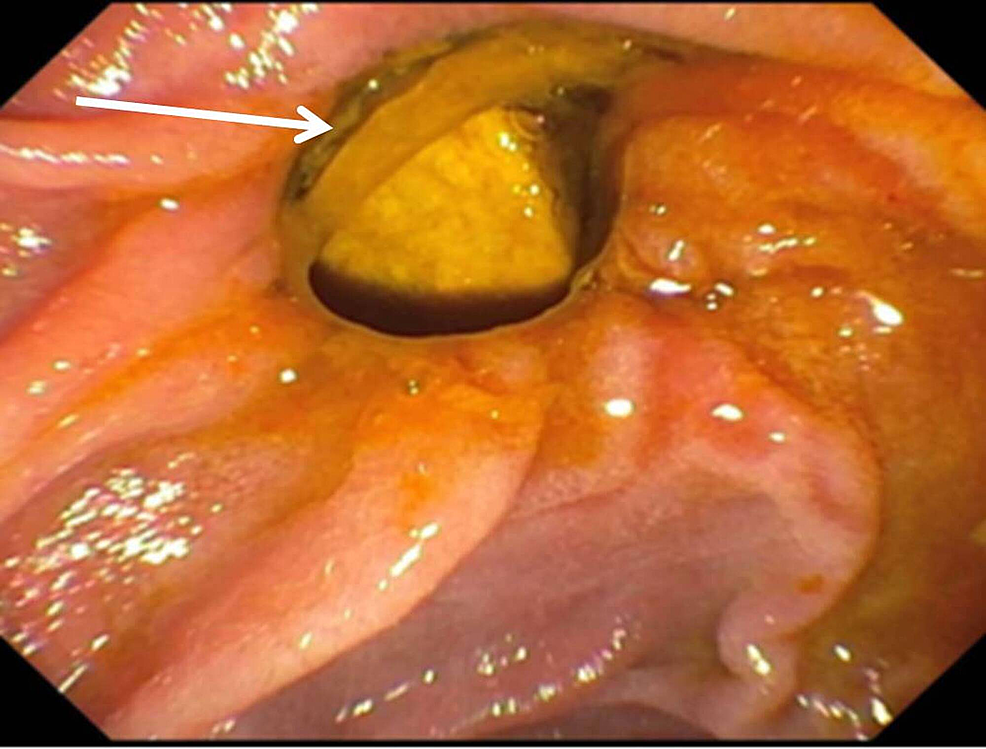 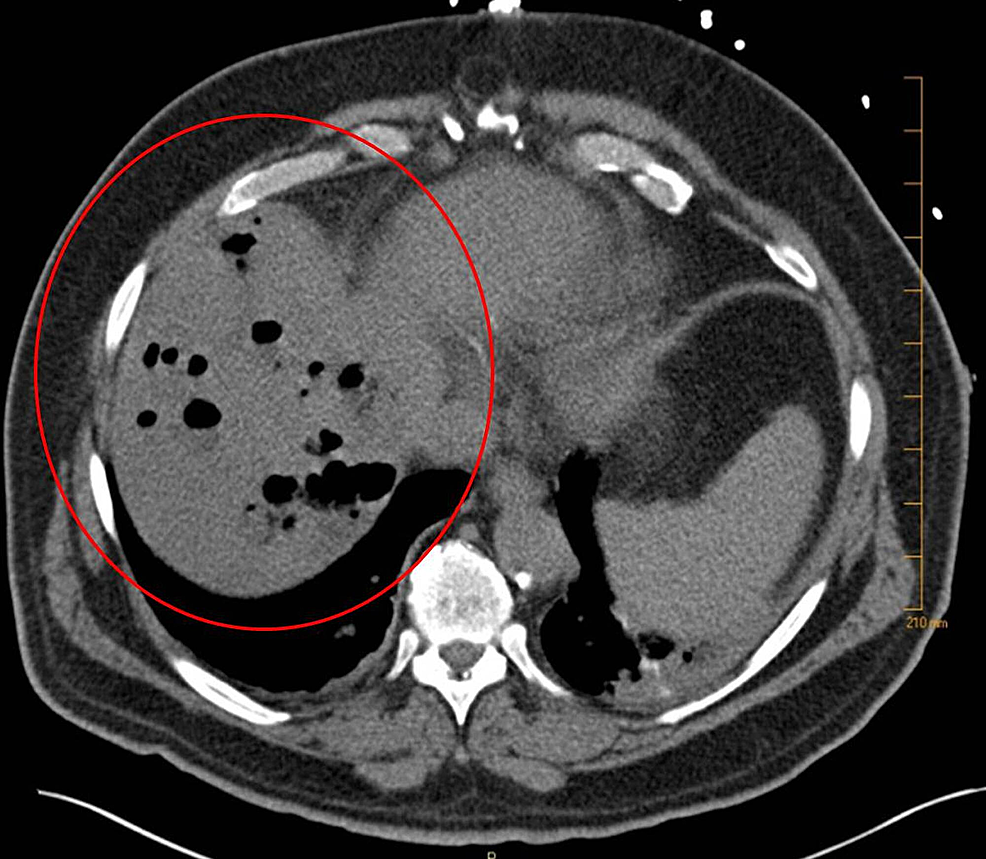 On hospital day four, general surgery was consulted. Repeat CT scans of the abdomen showed no worsening of the liver abscesses. However, the patient continued to decline clinically, with sepsis progressing to multi-system organ failure, requiring hemodialysis. Furthermore, he developed an altered mental status and was intubated for airway protection. Given his worsening clinical picture, the patient was taken to the operating room where he underwent open surgical debridement and drainage with ultrasound guidance. The CT scan obtained on postoperative day two demonstrated resolution of liver abscesses (Figure 4). The blood cultures obtained in our institution were negative. However, the hepatic abscess culture grew Saccharomyces cerevisiae (SC) after 10 days of incubation. 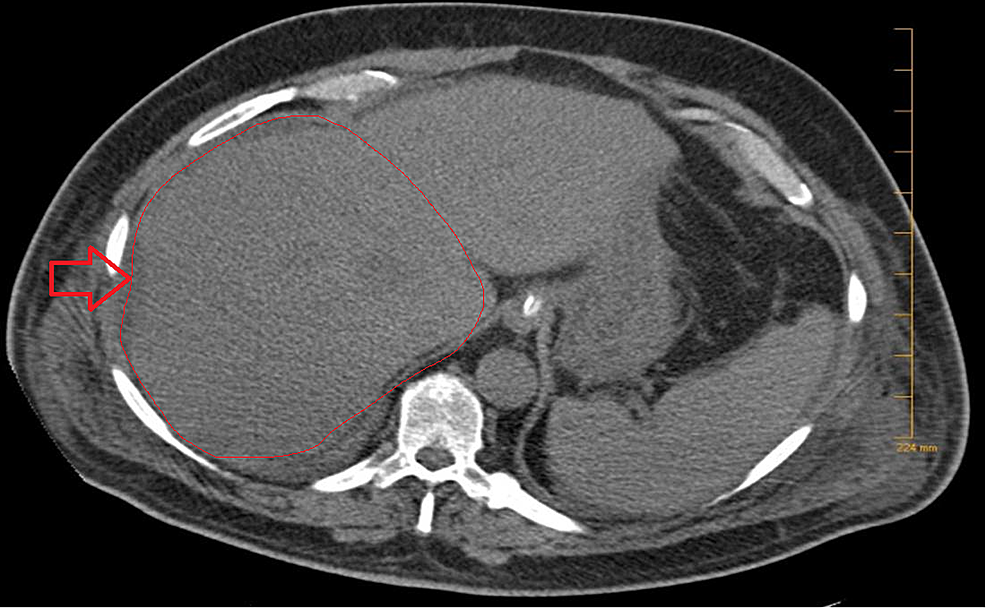 On postoperative day three, the patient had a seizure episode, prompting a CT scan of the head which demonstrated cerebral edema. Magnetic resonance imaging (MRI-angiogram) of the head was done, revealing no vascular abnormality. The cerebral edema was thought to be secondary to acute liver failure. A repeat CT scan of the head, on postoperative day five revealed progressive diffuse cerebral edema with the development of obstructive hydrocephalus (Figure 5). Neurosurgery was consulted, who felt further intervention would not alleviate an impending herniation. On hospital day eleven, the patient's family opted for comfort care measures. He was terminally extubated, expiring shortly thereafter. 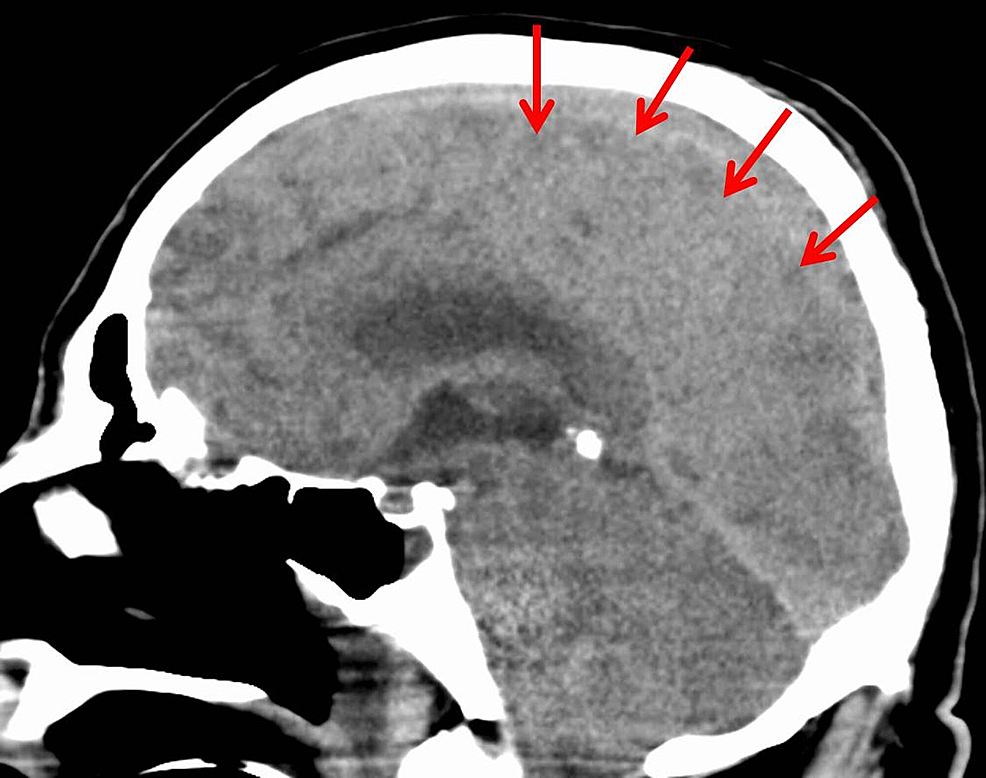 Law and Lee [3] reviewed 20 cases of CP bacteremia with liver abscesses from 1990 to 2012, showing a median time from admission to death of 11 hours. In contrast to those described in the literature, our patient did not have massive intravascular hemolysis, hypotension on presentation, or a rapidly fatal outcome. Although his initial blood cultures were positive for CP at outside hospital, his repeat blood cultures in our hospital were negative for organisms. This negative result could be explained by early initiation of intravenous antibiotics.

It is unclear whether this patient truly had CP liver abscess because hepatic fluid failed to isolate CP. Nevertheless, he presented with clinical features of pyogenic liver abscess: fever, epigastric pain, bacteremia, and the presence of gas on liver image studies. The liver culture could be false negative for CP. There was also a case in the literature reported with positive CP blood culture with failure to isolate CP from liver abscess culture [7].

We proposed that his fulminant hepatic failure was the primary event leading to his clinical outcome. This would explain the lack of CP in the liver abscess culture. The majority of fulminant liver failure are idiopathic. The hepatic cell death and necrosis, as well as the ERCP performed prior to the CT scan, could contribute to the hepatic gas shown on the CT image. The abscess formation pattern during the debridement was noted to be in the hepatic vein distribution, which has been shown to be more consistent with liver necrosis rather than a liver abscess. This could explain the patient’s lack of overwhelming shock expected with CP bacteremia. To our knowledge, this is the first documented case of CP bacteremia associated with fulminant liver failure which progressed to fatal cerebral edema.

We reviewed 37 cases of CP bacteremia with associated liver abscesses reported since 1990 (Table 1). These cases had an average age of 67 years (range: 42 to 84; 26 patients were male (70%), and 11 were female (30%). The most common underlying condition was diabetes (41%). There were eight patients with diabetes as the only medical co-morbidity. Ten patients (27%) had malignancy. Two (5%) had a history of transplantation for primary sclerosing cholangitis or alcohol cirrhosis who were on immunosuppressive therapy. Eight (20%) had a history of hepatobiliary pancreatic operations or procedures within two months prior the diagnosis of CP liver abscesses. Six (16%) had no underlying conditions.

References mentioned in this table are available on request.

The survival rate is only 37.8% among the reviewed cases. Of the 14 survivors, 12 (85%) had the liver abscesses removed. The median time from presentation to death for mortality is 10.3 hours, which is similar to the previous report of 11 hours [3].

CP bacteremia remains a rare but life-threatening disease which requires timely diagnosis, early systemic antibiotics, and source control. A timely diagnosis could be a challenge because of the time required for the blood culture result. A clinical picture of fever, epigastric pain, bacteremia, and hepatic gas-formation on imaging studies should prompt the diagnosis of CP infection. For associated liver abscesses, either percutaneous drainage or surgical drainage is acceptable. For patients who present with acute liver failure, timely referral to a transplant center is imperative to improve the chance of survival.

The authors would like to thank Thomas J. Vandermeer and Burt Cagir for reviewing the manuscript.

© Copyright 2017
Shen et al. This is an open access article distributed under the terms of the Creative Commons Attribution License CC-BY 3.0., which permits unrestricted use, distribution, and reproduction in any medium, provided the original author and source are credited.

References mentioned in this table are available on request.