This prospective observational study was conducted at a tertiary care hospital in Karachi, Pakistan between July and December 2021. All patients who tested positive for the dengue virus either based on antigen or antibodies were included in the study. Convenient sampling was used. A structured proforma was used for data collection. Microsoft Excel (Microsoft Corporation, Redmond, WA) and Statistical Package for the Social Sciences (SPSS, IBM Corp., Armonk, NY) were used for the entry and analysis of data, respectively.

In conclusion, the study revealed that males were more frequently infected with the virus as compared to females. Furthermore, fever, headache/joint pain/body aches, diarrhea, and low platelet count are the major clinical and laboratory outcomes. Patients with a low level of platelets are more prone to bleeding, and platelet transfusion increased survival chances in such patients.

Dengue fever is a vector-borne viral infection caused by a virus of the genus Flavivirus, which belongs to the family Flaviviridae, consisting of single-stranded RNA [1]. Dengue is endemic in the tropical and subtropical areas of the world with 100 billion dengue cases being reported worldwide and approximately 50-200 million cases with 500,000 incidences of dengue hemorrhagic fever and over 20,000 deaths documented every year across the world [2].

Pakistan is a subtropical country and it is endemic for vector-borne diseases such as dengue and malaria. The incidence of dengue has been expanding in Pakistan and yearly morbidity and mortality have been on the rise. Dengue was first introduced in Pakistan at the Karachi seaport [1,3]. The first case was reported in Karachi in 1994, and a severe outbreak was reported in 1995 in Hub, Balochistan [4]. In Pakistan, four dengue serotypes circulate the entire year, with peak outbreaks occurring in post-monsoon months. In Pakistan, it has become a significant threat since 2005, putting millions of residents at risk [4]. Contributing factors to the expansion of the dengue virus include increased population growth rate, global warming, unplanned urbanization, inefficient mosquito control, frequent air travel, and lack of healthcare facilities [5].

Clinical manifestations may vary from being asymptomatic [6], or with fever, myalgias, and rash to dreaded complications, such as shock and hemorrhagic fever [7]. Roughly, about 20% of infections are asymptomatic, with individuals suffering from disease outcomes, which include non-severe to mildly severe to severe outcomes of the broad clinical spectrum [8]. Recently, some studies have reported atypical presentation of dengue. Pothapregada et al. revealed some atypical manifestations of dengue fever in the sample population including lymphadenopathy, biphasic pyrexia, hepatitis, febrile diarrhea, refractory shock, altered consciousness, portal hypertension, cholecystitis, acute respiratory distress syndrome, myocarditis, and pericardial effusion [9].

Diagnosis relies on laboratory evaluation. Early diagnosis and prompt treatment are critical to reducing overall morbidity and mortality [10]. The treatment options include symptomatic management with hydration, analgesics, and control of complications, as currently there is no antiviral therapy available and the disease is usually self-limiting [11-13]. Our research aimed to study the overview of dengue fever and its clinical manifestations, both typical and atypical presentations, in the population of Karachi, Sindh, Pakistan.

A prospective observational study was conducted at a tertiary care hospital in Karachi, Pakistan between 1st July and 31st December 2021. The data collection commenced after ethical approval was obtained from the institutional review board (IRB) of Jinnah Postgraduate Medical Centre (reference number: F2-102-IRB-2021-GENL/5446/JPMC). A nonprobability convenience sampling technique was employed to enroll the participants.

All patients, irrespective of gender and age, who presented to the outpatient department during the study period and were positive for dengue infection based on either nonstructural protein 1 (Ns1Ag) antigen or dengue virus-specific antibodies (immunoglobulin G (IgG) and immunoglobulin M (IgM)) were included in the study. Patients with unconfirmed diagnosis and co-infection with hepatitis B or C were excluded from the study. Pregnant women were also not included (Figure 1). 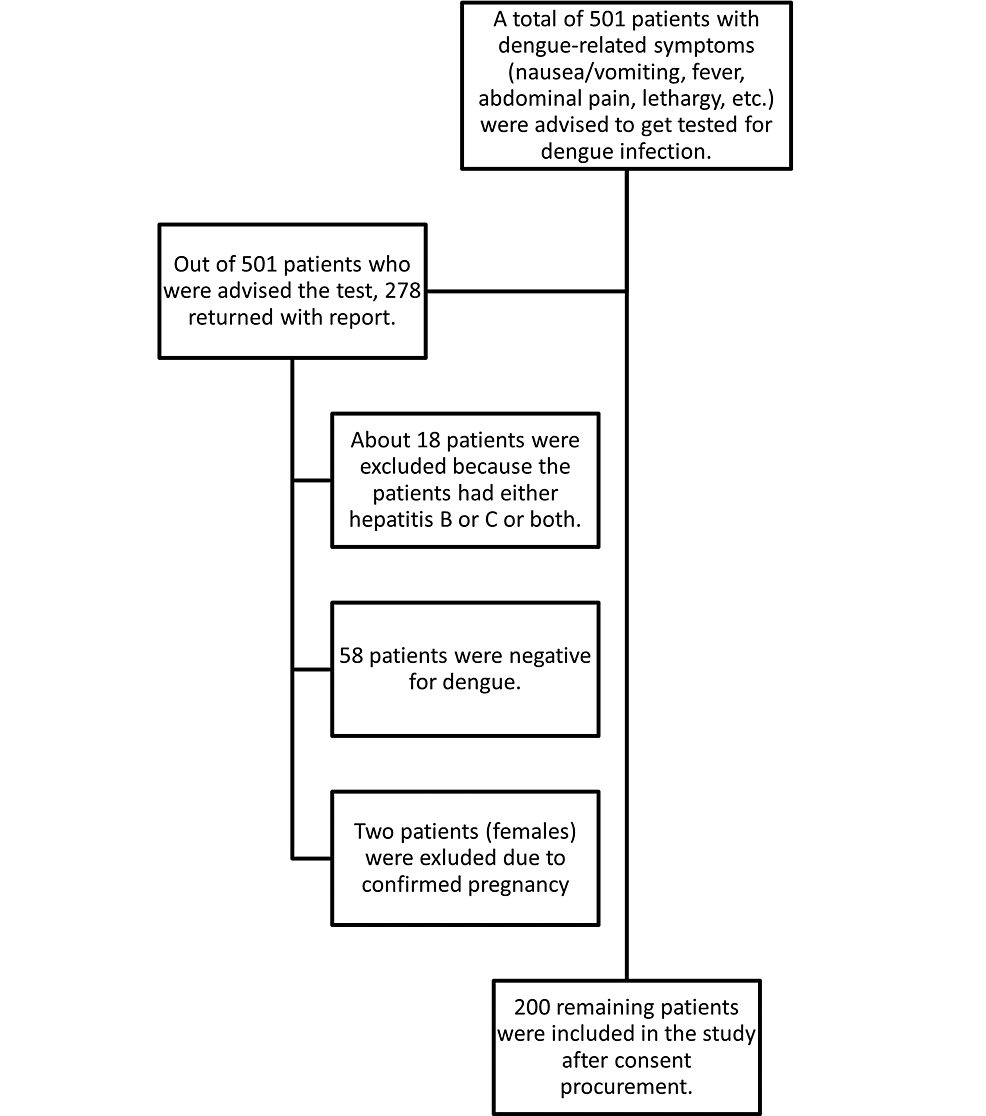 Informed verbal and written consent was obtained from the participants after the goal of the study was narrated to them. The participants were ensured of complete anonymity and confidentiality of the data. A pre-structured proforma was used for data collection. Clinical symptoms and laboratory values including the hematological parameters of all patients were gathered.

The data were entered into Microsoft Excel (Microsoft Corporation, Redmond, WA). Analysis of the data was done using the Statistical Package for the Social Sciences (SPSS) version 26.0 (IBM Corp., Armonk, NY). All continuous values, including hemoglobin (Hb), platelet count, and other red blood cell indices, were presented as mean and standard deviation. All categorical variables were presented as frequency and percentage. Multivariate regression was applied to adjust the impact of clinical and laboratory variables on the dengue symptomatology. A p-value of <0.05 was set as the cut-off for statistical significance. 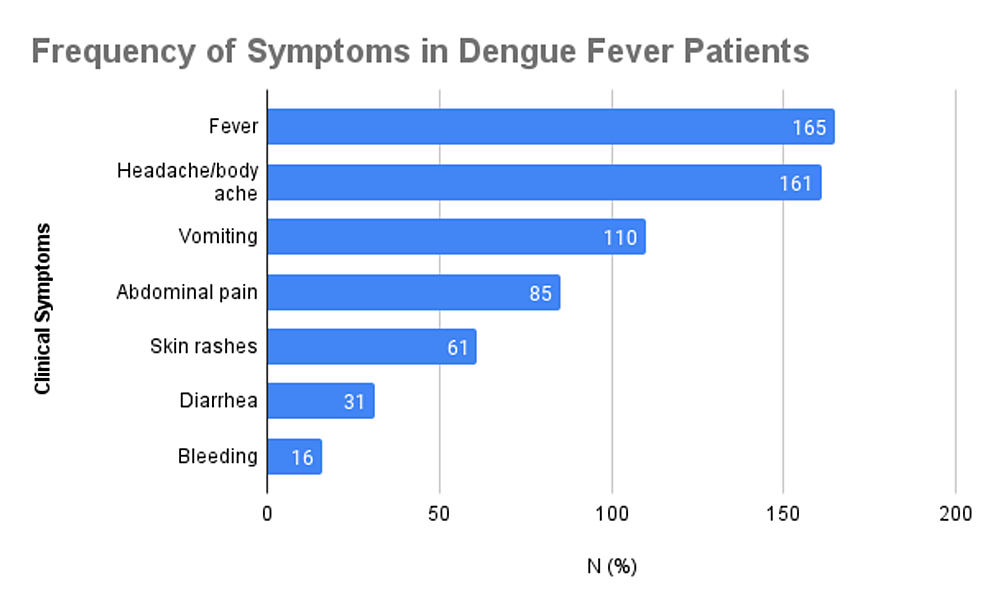 Variables are used to build a multivariate logistic model to predict bleeding in patients with dengue. The British Medical Association (BMA) package was used to select the optimal model with two criteria to evaluate model quality: post prob and Bayesian Information Criterion (BIC). Four best models were proposed by the package. All four models showed two variables, i.e., platelet transfusion and diarrhea, and models one to three had additional variables, i.e., hospital stay, platelet count, and headache/body ache/joint pain, respectively. One of these models was chosen because it had the highest post prob (90%) and the lowest BIC (-1002.00).

The overall survival rate in case of bleeding was 93.75%, while in patients with no bleeding, it was observed to be 98.36%. In the multivariable logistic regression, we adjusted for the hospital stay, platelet transfusion, and diarrhea. We found a significant association of these variables with the presence of bleeding in dengue patients. Patients with each additional stay at the hospital were more likely to bleed (OR: 1.02; 95% CI: 1.01-1.04). Patients with diarrhea symptoms were significantly associated with increased occurrence of bleeding in dengue patients (OR: 1.35; 95% CI: 1.25-1.46). Moreover, adjusted models further confirm the significant association of positive platelet transfusion with the presence of bleeding (OR: 1.60; 95% CI: 1.43-1.78) (Table 3).

Among 200 total dengue patients, 16 patients had bleeding as an outcome. Table 4 shows the data of participants in whom bleeding occurred and also those in whom no bleeding occurred concerning clinical symptoms and antigen/antibody detection. Out of these 16 patients, most were Ns1Ag positive (93.75%), had a fever (81.25%), headache/body ache/joint pain (68.75%), and diarrhea (81.25%), while those with dengue-specific antibodies were less likely to bleed, as 6.2% were IgG and IgM positive and 31.2% were positive for both antibodies. During the study period, four patients expired.

Based on gender, the results of seroprevalence observed were consistent with other studies in India, Singapore, and Pakistan, as males were tested positive more than females [18-20]. This may be attributed to differences in social and cultural lifestyles, as males are involved more in outdoor activities with less body cover. Most patients were symptomatic and symptoms significantly associated with dengue were fever, skin rash, headache, joint pain, vomiting, and diarrhea, which is consistent with the findings of the above studies [15].

Bleeding in patients infected with the dengue virus is multifactorial and is directly related to platelet count [21]. Platelet count, hospital stay, and diarrhea were found as significant risk factors leading to bleeding, while other laboratory values and clinical symptoms were not found to have a significant impact on bleeding. In our study, the occurrence of bleeding was lesser than that reported in another study, where bleeding occurred in 32.78% of patients with dengue fever and 54.05% of patients with dengue hemorrhagic fever. Platelet transfusion was significantly related to bleeding (OR 1.60; 95% CI: 1.43-1.78; p < 0.001) in dengue positive patients.

Shakya et al. revealed several atypical presentations in dengue patients including petechiae, subconjunctival hemorrhage, nosebleeds, as well as heavy menstrual bleeding in women. Furthermore, the study also observed that eight individuals suffered from acute kidney injury, and six patients presented with central nervous system dysfunction [22]. In a case series from India, patients presented with dengue encephalitis and viral pneumonia. The study revealed that one of the patients suffered from refractory shock and expired [23]. Thus, it can be seen that atypical manifestations in dengue patients are being reported in high numbers.

The survival rate in case of bleeding was 93.75%, while in patients with no bleeding, it was observed to be 98.36%, which is higher than that reported in Lahore, where it was 81% [24]. Currently, there is no active surveillance system in Pakistan for vector-borne diseases such as malaria and dengue and it relies on a passive system that does not conclude the entire population of the entire country, especially areas with poor health facilities. Inauguration of such an active system will aid the health department in monitoring such outbreaks more closely and identifying the areas with severe outbreaks. On other hand, there is no approved and specific treatment for dengue virus infection, so supportive symptomatic treatment is mandatory. A prompt diagnosis and control of the spread of the virus through vector mosquitoes is a standard approach to control the infection [25].

The present study had certain limitations. First, the study was conducted in a single center, and second, the sample size was rather small. Both these factors limit the interference of our findings to a larger population. Finally, the overall mortality rate and long-term outcomes of patients with dengue fever were not considered due to resource restrictions and a high rate of loss to follow-up of patients. A further large-scale study with a more diversified sample population is warranted.

It was concluded from the study that most of the patients were carrying the antigen of the dengue virus, which can be transmitted to other persons. Males were more infected with the virus as compared to females. Moreover, fever, headache/joint pain/body aches, diarrhea, and low platelet count are the major clinical and laboratory outcomes, respectively. Patients with a low level of platelets are more prone to bleeding, and platelet transfusion increased survival chances in such patients. Furthermore, we found that patients with dengue-specific antibodies were less likely to bleed as 6.2% were IgG and IgM positive and 31.2% were positive for both antibodies.

© Copyright 2022
Arshad et al. This is an open access article distributed under the terms of the Creative Commons Attribution License CC-BY 4.0., which permits unrestricted use, distribution, and reproduction in any medium, provided the original author and source are credited.