Breast cancer rarely metastasizes to the uterus. Here, we report two breast cancer patients with synchronous metastases to the uterus. Case 1 highlights a 46-year-old female with invasive ductal carcinoma who presented with a breast mass and was found to have uterine enlargement on positron emission tomography (PET) scan. Biopsy revealed a metastatic 4 mm focus of breast cancer in the background of endometrial hyperplasia. Case 2 reports a 62-year-old postmenopausal female diagnosed with lobular carcinoma of the breast following an abnormal screening mammogram. A routine pap smear necessitated further workup, revealing simultaneous endometrial and cervical metastasis. Both patients did not have any gynecologic symptoms and presented a diagnostic challenge.

Breast cancer is the most common cancer worldwide and accounts for 29% of all cancers in women. It is the second leading cause of cancer mortality among women and the leading cause of cancer mortality among women 29-60 years of age [1]. Invasive ductal carcinoma (IDC) of the breast and invasive lobular carcinoma (ILC) of the breast account for 75% and 15% of all cases of breast cancer, respectively [2].

Six percent of breast cancer patients present with metastases and approximately 30% develop metastases following definitive treatment [3-4]. ILC is more likely to have metastases at presentation than IDC [5]. Although the most common sites of breast cancer metastasis, lung/pleura, liver, bone, and brain, are similar in ductal as well as lobular carcinoma, lobular carcinoma is more likely to metastasize to the gastrointestinal system, gynecologic organs, peritoneum-retroperitoneum, adrenal glands, and bone marrow [6].

A 42-year-old Hispanic woman with no known comorbidities presented to the emergency room with a two-month history of a painful and enlarging right breast mass, extending to the right axilla. Her review of systems was positive for anorexia and an unspecified amount of weight loss over the last two months. Social history was negative for smoking, alcohol, or illicit drug use. Family history was negative for any cancer. Physical examination revealed a firm, tender, and immobile mass in the right breast at the one o’ clock position, concerning for breast cancer. An abdominal exam revealed an enlarged uterus approaching the xiphoid process. An ultrasound examination revealed a mass at the 12 o’ clock position in the right breast, associated with a skin thickening of 4.2 mm and axillary lymphadenopathy, the largest measuring 1.2 cm in the long axis. There were two, right supraclavicular nodes measuring 8.5 mm and 9.7 mm, respectively. A core needle biopsy of breast mass revealed a poorly differentiated IDC with modified Scarf-Bloom-Richardson grade III. An immunohistochemical (IHC) analysis demonstrated that the tumor was moderately positive for estrogen receptor (ER) at 15%, strongly positive for progesterone receptor (PR) at 50%, Ki-67 unfavorable at 30%, and HER2/NEU-positive by fluorescence in situ hybridization (FISH). The axillary lymph node biopsy was also consistent with metastatic breast cancer.

A magnetic resonance imaging (MRI) breast was obtained to rule out any malignancy in the contralateral breast, which only demonstrated a 5.5 cm right breast mass (clinical stage T4N2). The staging workup, including the bone scan and computed tomography (CT) scan of the chest, were unremarkable. However, a positron emission tomography (PET) scan demonstrated massive uterine enlargement with diffuse hypermetabolic activity and bilateral hydronephrosis due to external compression (Figure 1). 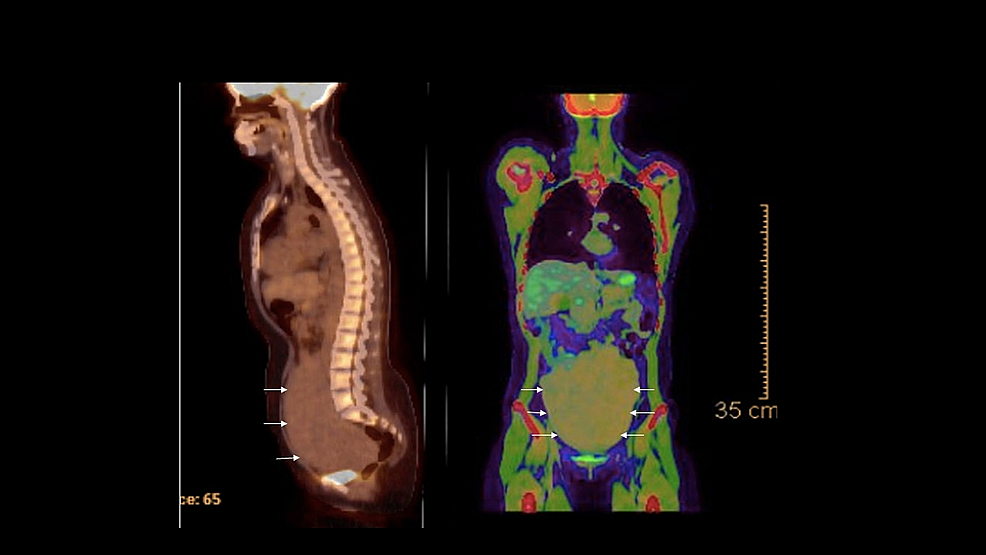 The patient was discussed during a multidisciplinary conference and recommended to undergo systemic chemotherapy followed by surgery. She completed six cycles of docetaxel, carboplatin, trastuzumab, and pertuzumab. She had a good clinical response with a barely palpable, vague right breast mass and a decrease in uterine size to the level of the umbilicus. Restaging the PET scan showed no hypermetabolic activity. She then underwent a total abdominal hysterectomy and a bilateral salpingo-oophorectomy. Final pathology showed a small metastatic deposit to the left ovary, but no evidence of residual metastases in the endometrium. Given the stage IV disease at presentation, the patient was started on maintenance chemotherapy with trastuzumab and pertuzumab. She continues to be on maintenance therapy for over one year without any evidence of recurrence or progression.

A 62-year-old Caucasian woman with a long-standing history of smoking presented after a screening mammogram revealed a suspicious 14 mm mass in the superior aspect of the left breast. Her previous mammogram was five years ago, which was normal. Family history was positive for breast cancer in mother and sister. A physical examination revealed a 1.5 cm, palpable, immobile, nontender mass at the 12 o’clock position in the left breast. An ultrasound showed a 2.9 x 2.5 x 2.0 cm mass at the 12 o’ clock position of the left breast and right axillary lymphadenopathy. Provided contralateral axillary lymphadenopathy, an MRI was obtained to look for an occult right breast lesion, which showed an axillary tail mass of 1 x 2 cm with suspicious lymph nodes in the left breast. A core needle biopsy of the left breast mass was consistent with invasive lobular carcinoma along with fragments of a sclerosing papilloma. IHC staining demonstrated that the tumor specimen was strongly positive for ER and PR at 90% and 50%, respectively, Ki-67 of 5%, and HER2/NEU negative by FISH. A staging CT scan of chest, abdomen, and pelvis revealed a mass in the left breast as well as a right axillary tail mass and an enlarged uterus. A biopsy of the right axillary tail mass and lymph node also showed findings similar to those from the left breast mass. A routine pap smear necessitated further workup, revealing simultaneous endometrial and cervical metastasis. Given the enlarged uterus of 5.6 x 4.0 cm with an endometrium of 5 mm, a gynecology service was consulted and an endometrial biopsy was obtained, demonstrating metastatic lobular carcinoma, also involving the endocervix. This has been presented in Figure 2. 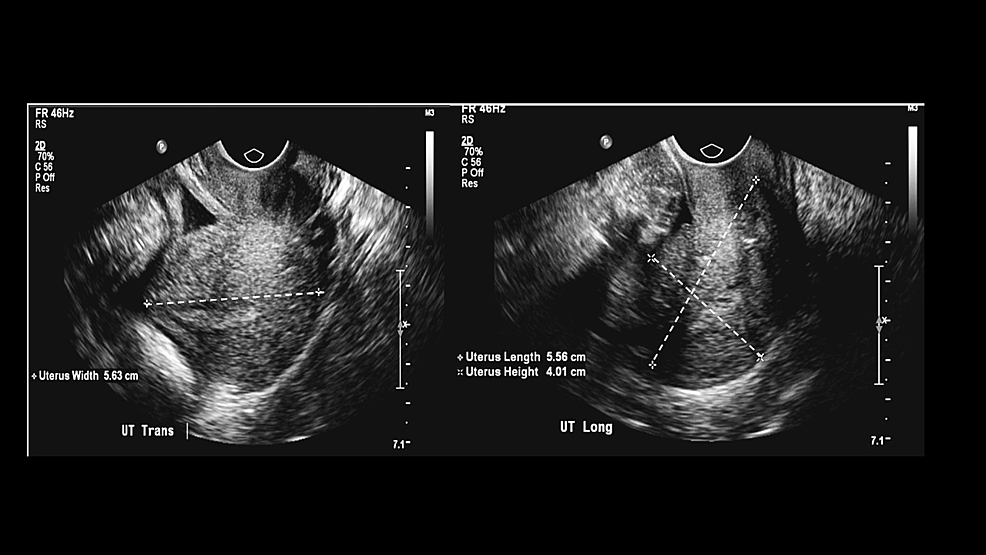 Figure 2: Ultrasound of the abdomen shows a large intrauterine mass.

IHC staining of the endometrial biopsy specimen was positive for pancytokeratin, vimentin, ER, PR, and GATA-3 and negative for PAX-8. This has been presented in Figure 3. 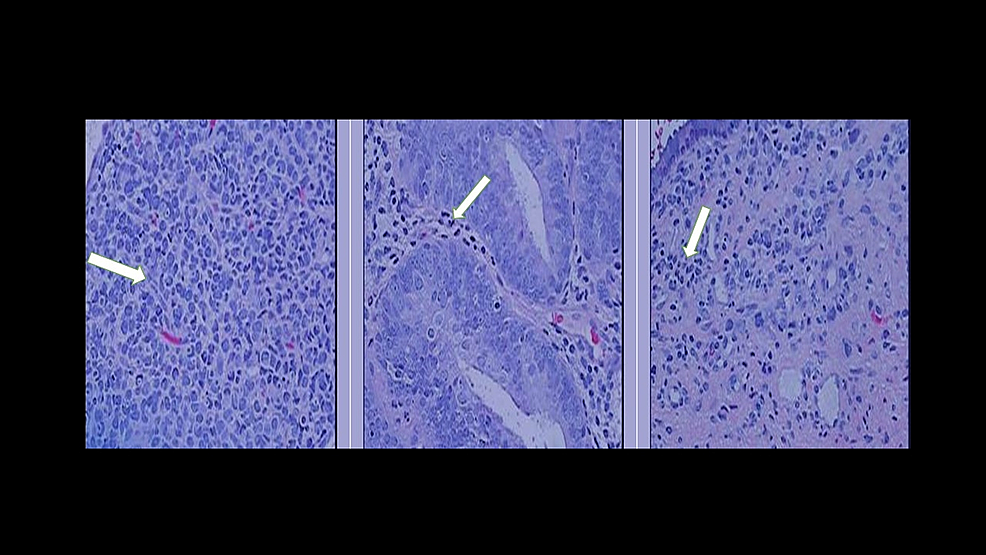 The patient was discussed during a multidisciplinary conference, and the consensus was that the patient has a bilateral breast lobular carcinoma with metastases of the right breast carcinoma to the right axillary lymph nodes as well as the endometrium. She was offered hormonal and systemic chemotherapy with or without hysterectomy. The patient declined any further treatment and was lost to follow-up.

Kumar et al. studied 63 cases of uterine metastases from a variety of extra-genital cancers, primarily based on an autopsy examination [7]. Breast cancer accounted for approximately 43% of these cases, followed by colon cancer (18%), stomach cancer (11%), and pancreatic cancer (11%). Although metastases primarily involved the myometrium only (64%), 33% of patients also had endometrial involvement. Only two patients had isolated endometrial involvement, both of whom were detected on autopsy examination. This study suggests that uterine metastases from extra-genital cancers occur in the context of disseminated disease. These metastases usually stay overt given the short life expectancy thereafter. However, both patients presented here had synchronous isolated uterine metastases from breast cancer. Isolated uterine metastases at diagnosis presented a significant therapeutic challenge to us. Although the disease was considered to be stage IV, surgical treatment of isolated metastases was considered in both patients. Such an approach would definitely be controversial based on current guidelines. However, one patient who underwent surgery is clinically disease-free until recent follow-up.

We conducted a literature search of all patients with uterine metastases of breast cancer, utilizing PUBMED. We identified a total of 23 previously published cases, which are summarized in Table 1, along with the two cases we have reported [9-23].

Out of 23, nine were ductal and 13 were lobular. The remaining three were mixed, apocrine, and metaplastic. Fifteen were ER positive, 13 were PR positive, and eight cases were Her2-negative. Only one case was reported with the synchronous presentation of metastatic breast cancer with endometrial metastasis. Vaginal bleeding was the most common presenting symptom. Only one patient presented with uterine enlargement.

A majority of patients with uterine metastases were positive for hormone receptors. It is unclear whether there is a relation between hormone positive status and risk of uterine metastases. We know tamoxifen, commonly used for hormone receptor-positive breast cancer, leads to endometrial hyperplasia. It is plausible that these endometrial changes and the associated angiogenesis lead to a favorable microenvironment for the seeding of breast cancer metastases.

The uterine metastases of extra-genital cancer can present a diagnostic challenge for physicians as well as pathologists. Even when appropriate workup is done, it may be difficult to distinguish between uterine cancer and the uterine metastases of breast cancer. Both have a glandular architecture on histopathology and both are likely to demonstrate positivity for hormone receptors. Immunohistochemical stains like GATA3 and cytokeratin should be employed in such cases, which have a sensitivity of 86% for breast cancer [29].

In conclusion, synchronous endometrial metastases from breast cancer are extremely rare and can pose a significant diagnostic and therapeutic challenge. In the setting of isolated uterine metastases from breast cancer, surgery might be a viable option, especially if symptoms are present. However, it is unknown if surgery in these cases would prolong survival. The long-term follow-up of such patients is warranted.

© Copyright 2017
Akhtar et al. This is an open access article distributed under the terms of the Creative Commons Attribution License CC-BY 3.0., which permits unrestricted use, distribution, and reproduction in any medium, provided the original author and source are credited.

Figure 2: Ultrasound of the abdomen shows a large intrauterine mass.