A diagnosis of antineutrophil cytoplasmic antibody (ANCA)-associated vasculitis is difficult to establish in elderly patients. Herein, we report a case of acute cholecystitis mimicking sepsis in an elderly patient with ANCA-associated vasculitis. A 99-year-old woman was transferred to a rural community hospital on account of anorexia and hypotension; there, she was initially diagnosed with sepsis and treated accordingly. However, she developed new-onset right upper quadrant tenderness on indirect fist percussion of the liver, and Murphy’s sign was positive. While imaging did not reveal any findings suggestive of cholecystitis, the high index of suspicion for cholecystitis prompted an exploratory laparoscopy. Intraoperatively, the gallbladder wall was found to be inflamed, necessitating laparoscopic cholecystectomy. Histopathologic examination of the resected gallbladder showed neutrophilic infiltration and fibrinoid necrosis of the arterial walls. Perinuclear ANCA titers were elevated. These findings were consistent with a diagnosis of ANCA-associated vasculitis, and treatment with prednisolone markedly improved her condition. This case shows the difficulty encountered in differentiating between sepsis and ANCA-related vasculitis based on clinical features and relatively non-invasive diagnostic strategies alone. This study highlights the utility of invasive diagnostic procedures (e.g., biopsy) in elderly patients in whom a diagnosis of ANCA-associated vasculitis is difficult to establish.

The diagnosis of ANCA-related vasculitis is even more difficult in older patients owing to the various comorbidities they may have that can complicate the history and physical examination findings [5] and alter the clinical course of sepsis from acute to subacute, similar to ANCA-associated vasculitis [6]. Furthermore, owing to their immunocompromised state, elderly individuals are at a higher risk of developing sepsis [7]. While the biopsy is essential to confirm a diagnosis of ANCA-associated vasculitis, its utility in older patients is limited due to its invasiveness.

A 99-year-old woman presented with anorexia and new-onset hypotension following a one-week history of fever and cough (which was left untreated), prompting admission to a rural community hospital. Her past medical history revealed hypertension, controlled with nifedipine, and osteoporosis. Prior to admission, the patient was independent in performing activities of daily living.

Laboratory results on admission are presented in Table 1 and were notable for anemia, leukocytosis, and elevated C-reactive protein levels.

Table 1: Laboratory data on admission and Day 7 of hospitalization 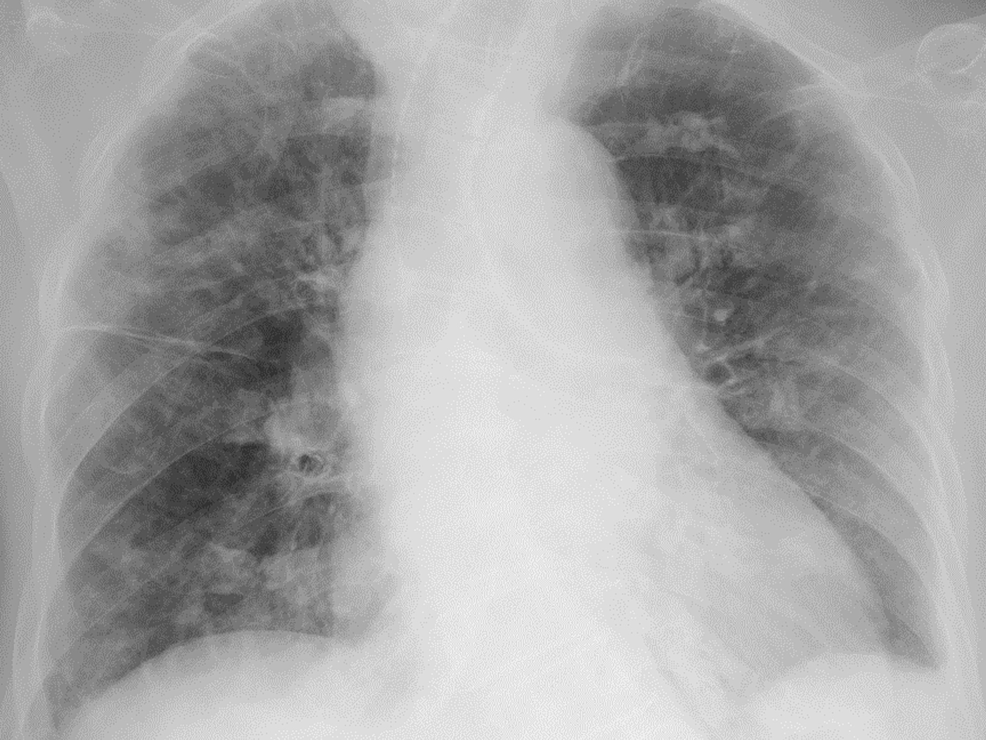 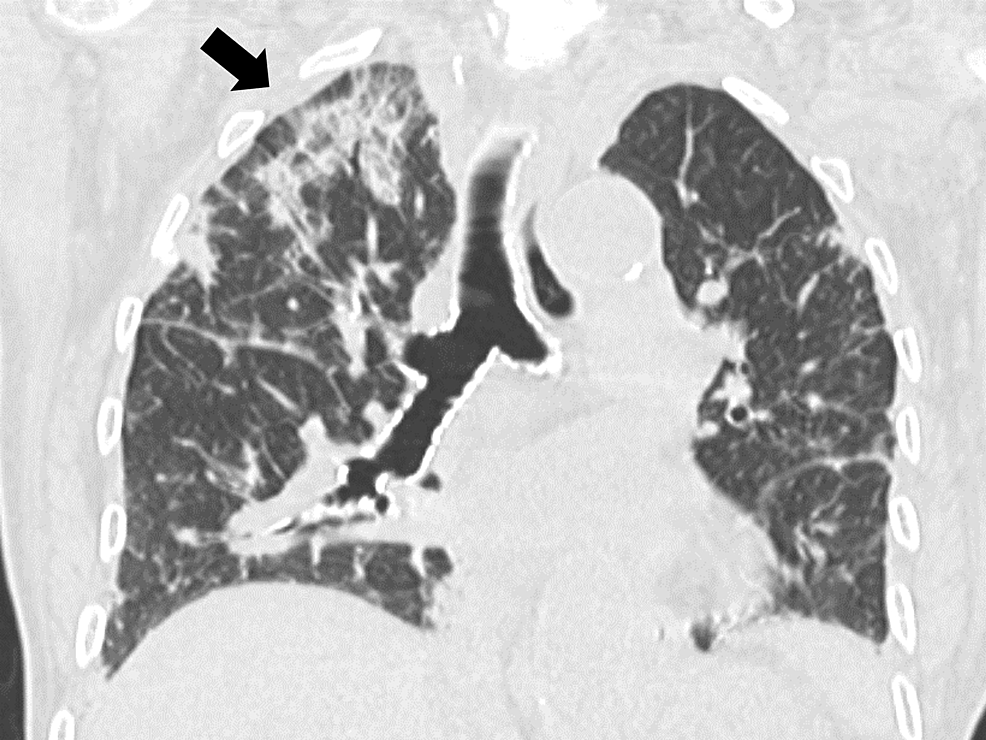 Sputum Gram staining showed neutrophilic and polymicrobial patterns. Regarding anemia, we performed an upper gastroduodenoscopy and a blood stool test, neither of which showed bleeding. We suspected interstitial pneumonia, but KL-6 and other factors indicative of interstitial pneumonia were negative, ruling out the disease. These findings were consistent with a diagnosis of bacterial pneumonia and sepsis, prompting treatment with ceftriaxone (2 g/day) and intravenous fluids. After initiation of treatment, her blood pressure normalized even though vasopressors were not used.

On the seventh day of admission, the patient developed right upper quadrant tenderness on indirect fist liver percussion and Murphy’s sign was positive. Contrast-enhanced abdominal CT did not reveal any evidence of cholecystitis or cholangitis (Figure 3). 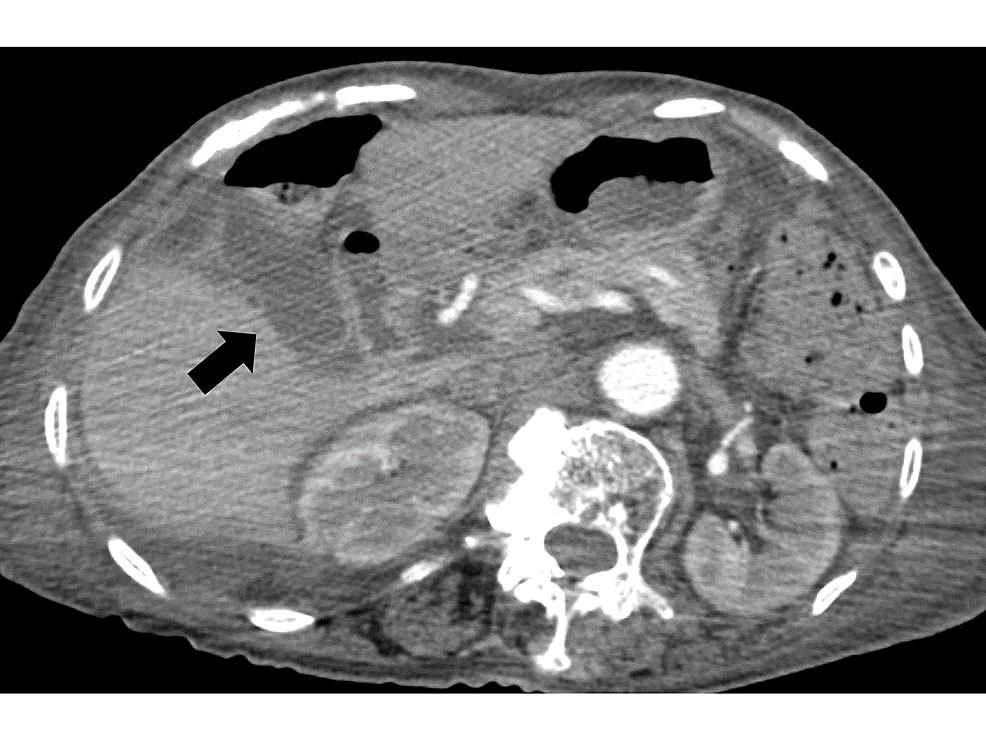 Liver function tests were unremarkable. Because of the absence of findings suggestive of other inflammatory lesions, we suspected cholecystitis based on the physical examination features.

The patient underwent exploratory laparoscopy, which revealed an inflamed gallbladder wall. Cholecystectomy was then performed, and no organism was detected on gram staining of bile. Histopathologic analysis of the resected gallbladder showed neutrophilic infiltration and fibrinoid necrosis of the arterial walls (Figure 4). 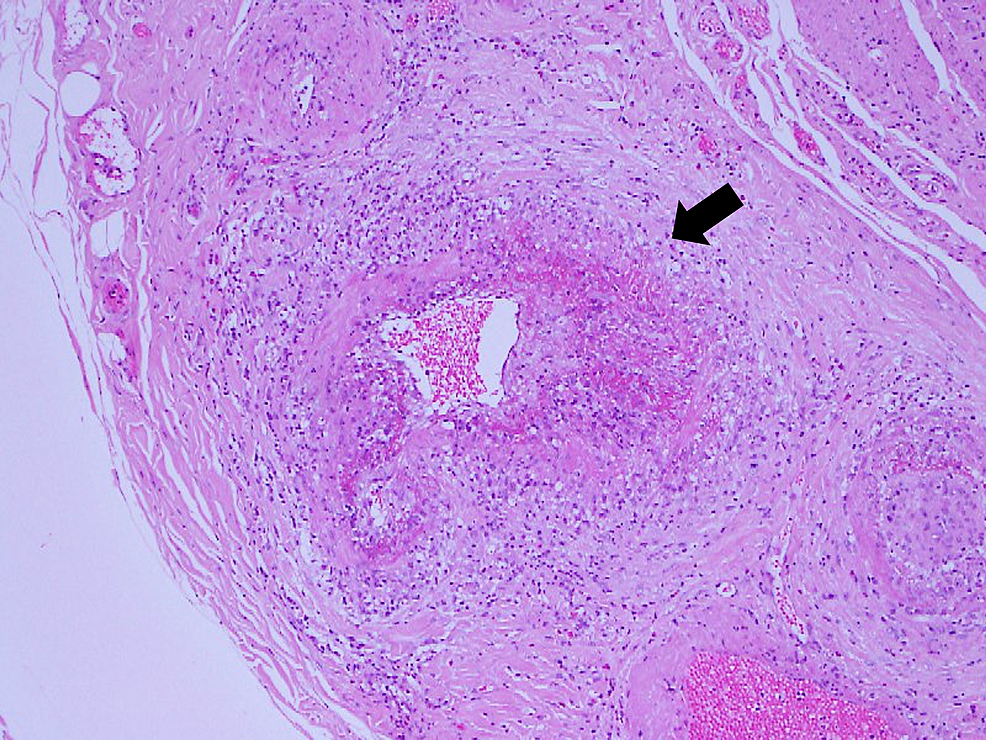 Postoperatively, the abdominal pain resolved but perinuclear antineutrophil cytoplasmic antibodies (p-ANCA) were elevated at 263 U/ml (normal range <3.5 U/ml). These findings were consistent with a diagnosis of ANCA-associated vasculitis with cholecystitis.

The patient was treated with prednisolone (1 mg/kg) and the fever resolved; we gradually tapered the drug. She was placed on a maintenance dose of prednisolone (3 mg/day) for two years, and her blood pressure normalized without nifedipine. Anemia, which could have resulted from vasculitis, resolved as well (hemoglobin, 11.7 g/dL).

Furthermore, although rare, the coexistence of sepsis and ANCA-associated vasculitis should be considered. In our case, the patient got slightly better with the administration of antibiotics for sepsis and pneumonia, but the fever was persistent due to vasculitis. She might have had a case of coexistence of sepsis and vasculitis. Older patients have weak immune systems, so early treatment of sepsis is vital. For the management of fever in older patients, sepsis should be treated promptly if suspected, the persistence of fever despite treatment should be investigated, and other inflammatory diseases, such as vasculitis, should be ruled out.

The use of a multidisciplinary approach in the diagnosis and management of acute cholecystitis in elderly patients with ANCA-associated vasculitis is very important. In this case, the surgeon was initially reluctant to perform invasive interventions on a 99-year-old patient. However, the development of clinical features consistent with cholecystitis (i.e., right upper quadrant tenderness on indirect fist liver percussion and a positive Murphy’s sign) [15] strengthened the decision to push through with invasive interventions, which later revealed ANCA-associated vasculitis. This highlights the importance of going against age-related stereotypes that limit the use of invasive procedures in elderly patients [16].

Table 1: Laboratory data on admission and Day 7 of hospitalization