Ascites is the most common complication of liver cirrhosis. Midodrine is a vasoconstrictor that improves splanchnic and systemic hemodynamics, reduces ascites, and improves clinical outcomes. Here, we aimed to examine the role of midodrine in cirrhosis-related ascites.

Midodrine alone leads to significant improvement in various clinical parameters in patients with cirrhotic ascites compared to standard medical care. At the same time, it was found to be non-inferior to albumin. Therefore, further well-designed studies need to be carried out on midodrine in addition to albumin for optimal clinical benefits among patients with ascites due to cirrhosis.

Ascites is one of the most common and serious complications of liver cirrhosis [1]. Ascites is managed with diuretics and sodium restriction. Ascites that does not reduce or that occurs shortly after therapeutic paracentesis despite sodium restriction and diuretic treatment is called refractory ascites [2]. Therapeutic paracentesis, combined with the expansion of plasma volume using albumin, is an effective and safe procedure with fewer risks than diuretic therapy in such cases [1]. Albumin, however, is expensive and, may have some risk of disease transmission; its use is thus controversial in some countries [1,3,4]. Peripheral arterial vasodilation has been hypothesized to be the critical factor in the pathogenesis of functional renal abnormalities in patients with cirrhosis [5]. Vasoconstrictor administration may decrease arteriolar vasodilation caused by paracentesis and prevent complications associated with a decrease in the effective arterial blood volume. Midodrine, an alpha-1 agonist directly acting on peripheral alpha-receptors, is a vasoconstrictor and is available as a cheap oral formulation. It has been commonly used to treat orthostatic hypotension and multiple secondary hypotensive disorders [6-8]. Recently, a single-dose administration of midodrine has been shown to substantially improve the systemic and renal hemodynamics of ascites in non-azotemic cirrhotic patients [7]. However, clinical trials evaluating Midodrine have provided inconclusive findings in patients with liver cirrhosis-related ascites, irrespective of the refractory status of the ascites [9].

We aimed to conduct a systematic review and meta-analysis to assess the effectiveness of midodrine in reducing mortality, improving response rates in patients with ascitic cirrhosis undergoing peritoneal paracentesis/drainage, assessment of MELD (Model For End-Stage Liver Disease), plasma renin, aldosterone, and creatinine.

PRISMA (Preferred Reporting Items for Systematic Reviews and Meta-Analyses) guideline was followed to carry out our systematic review and meta-analysis and is registered in PROSPERO (CRD42020222872) [10].

We included randomized controlled trials comparing midodrine with control intervention (e.g., placebo, sodium restriction, diuretic treatment, and therapeutic paracentesis) or an active intervention (e.g., different drug) in patients with cirrhotic ascites; and complete data for at least one primary end-point was reported. Studies like editorials, commentary, viewpoint, case reports and series, observational studies, and studies on animal or cell lines were excluded. In addition, articles with no proper data on midodrine on cirrhotic ascites and lacking adequate data of interest were excluded.

Two reviewers (PJ and GM) independently screened the title and abstract of imported studies, and any arising conflict was solved by the third reviewer (PK). A full-text review was done independently by PJ and PK. Data were extracted for both quantitative and qualitative synthesis. The conflicts were resolved by taking the third reviewer's opinion (GM). All the screening was done with the help of Covidence [11].

The quality of individual articles was evaluated using the Cochrane ROB (Risk of Bias) 2.0 for RCTs [13]. The risk of bias was assessed (Figure 1). Two of the authors independently assessed the design of each study, and the number of patients in outcomes including short-term mortality, paracentesis-induced circulatory dysfunction, serum creatinine, plasma renin, plasma aldosterone, and MELD scores. Third-person (among authors) resolved the disagreement. 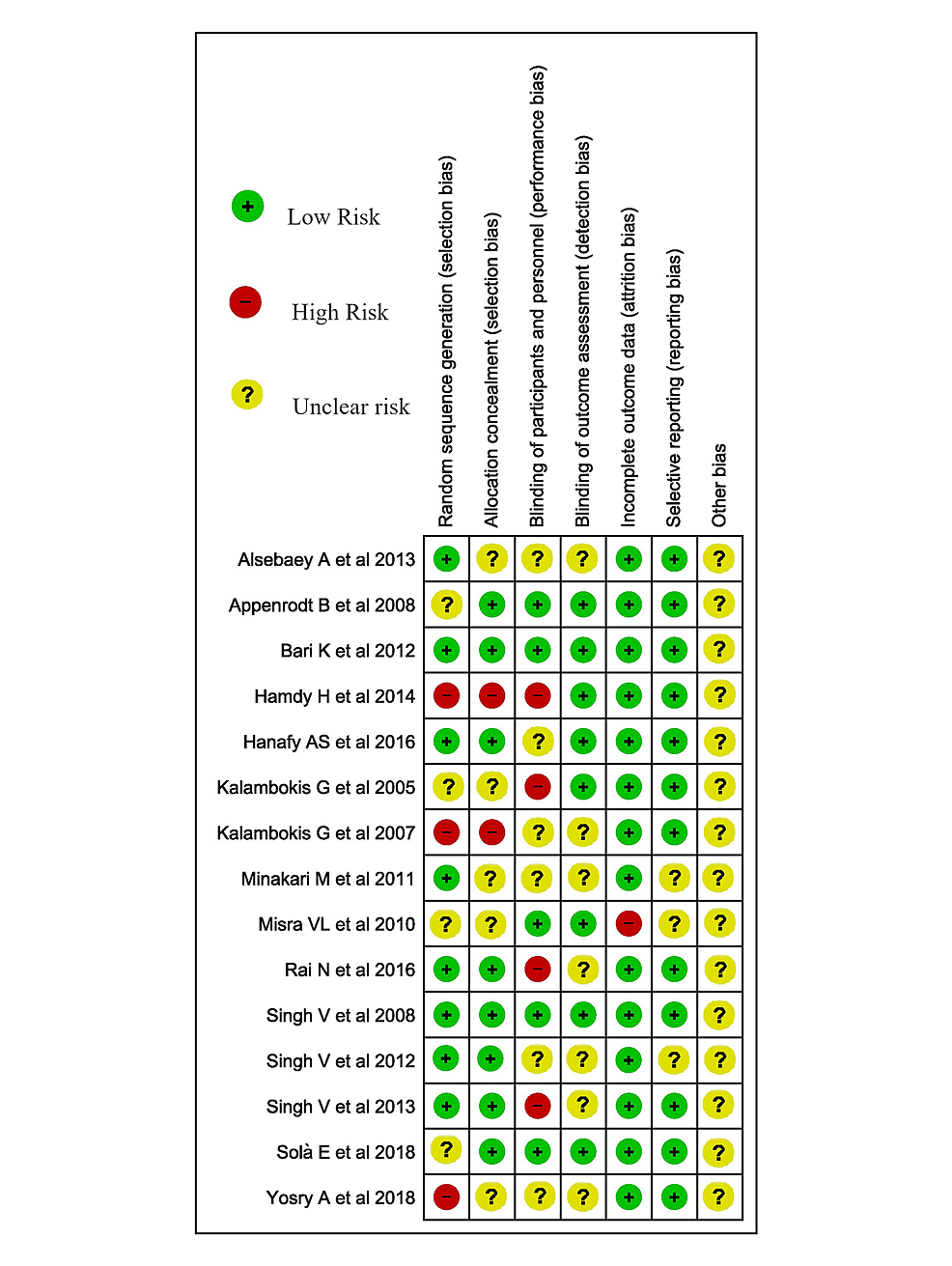 Data were analyzed using RevMan v5.4 (https://training.cochrane.org/). Odds ratio (OR) was used for outcomes like short-term mortality and paracentesis-induced circulatory dysfunction (PICD). Heterogeneity was measured by the I² test among the included studies. For data synthesis, a qualitative approach was planned. The handling of data and combining results of the studies was done using OR and using the random or fixed effect model based on heterogeneities. We analyzed the mean difference among the two groups for mean arterial pressure, MELD scores, plasma renin, plasma aldosterone, and serum creatinine level.

Subgroup analysis was done within the respective outcomes contrasting albumin-based control and other treatments as a control.

Publication bias of the included studies was assessed and presented using Funnel plots.

We identified a total of 865 studies through a thorough database search. A total of 318 duplicates were removed, and we screened the title and abstracts of 547 studies. After excluding 497 studies, we assessed the full text of 50 studies, and 30 studies were excluded for definite reasons (Figure 2). Therefore, 15 remaining studies were included in our qualitative analysis. 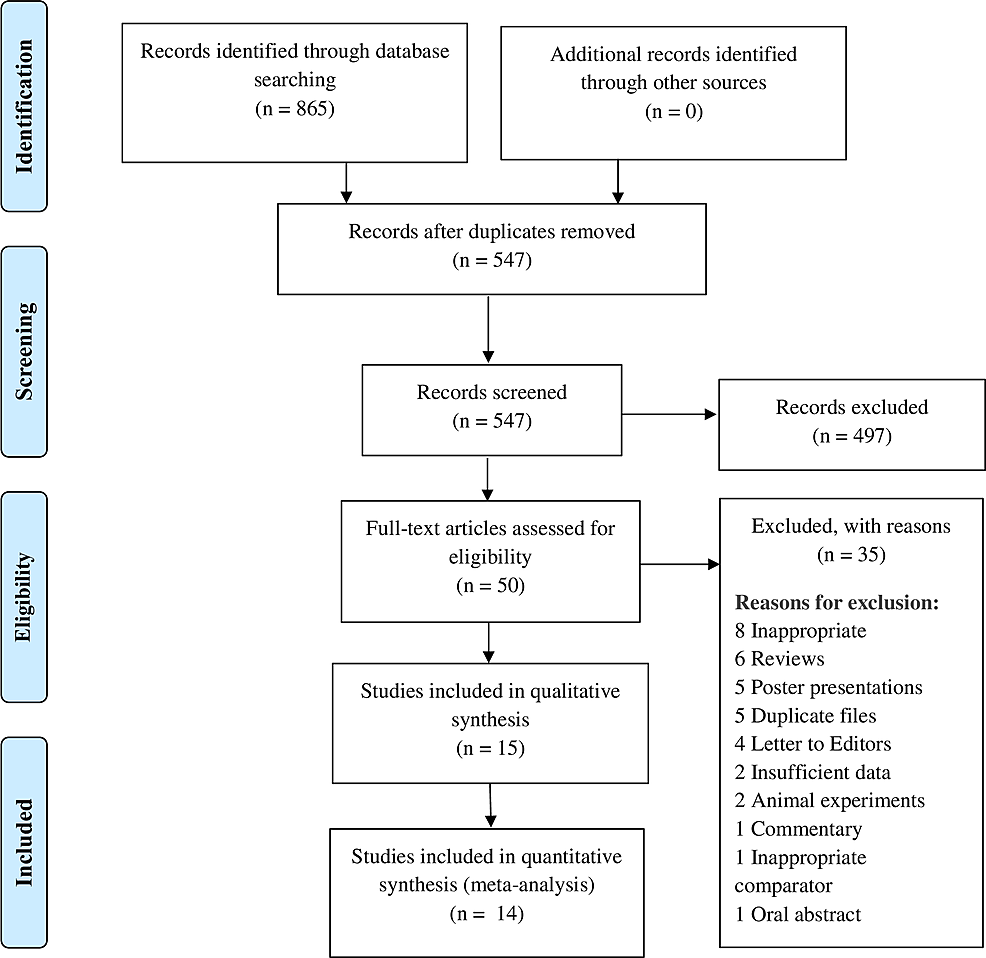 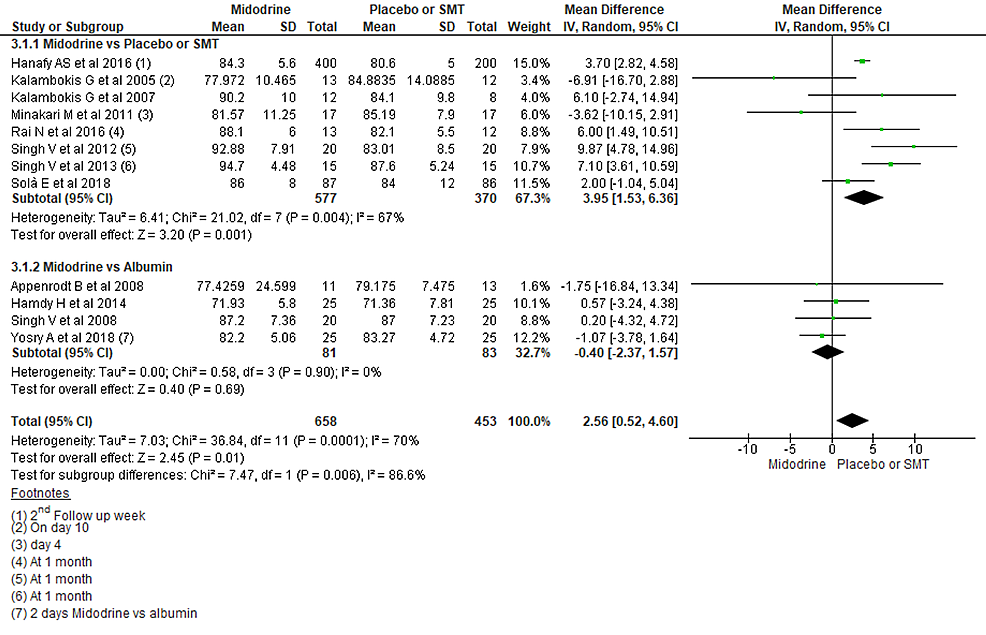 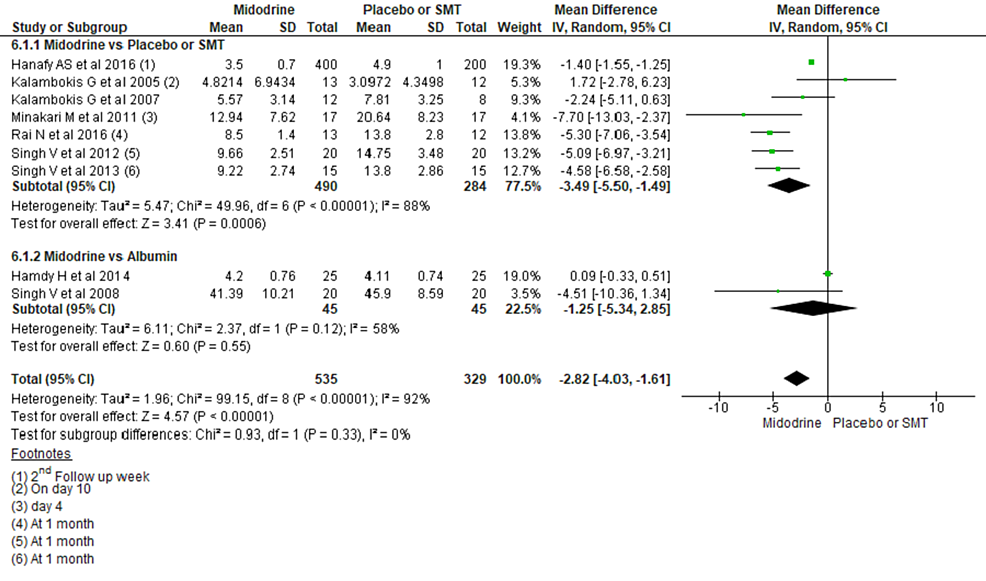 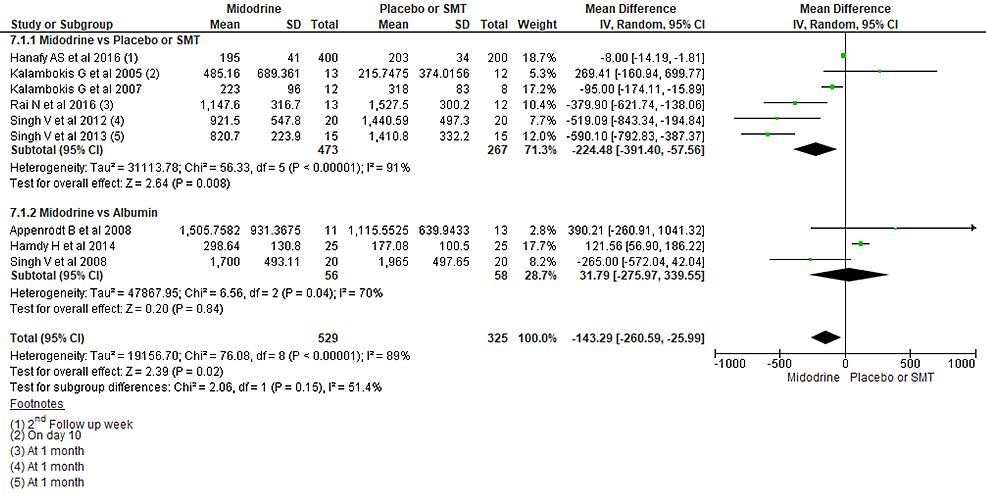 Figure 6: Forest plot comparing mean PAC among midodrine and other treatments in case of ascites due to cirrhosis 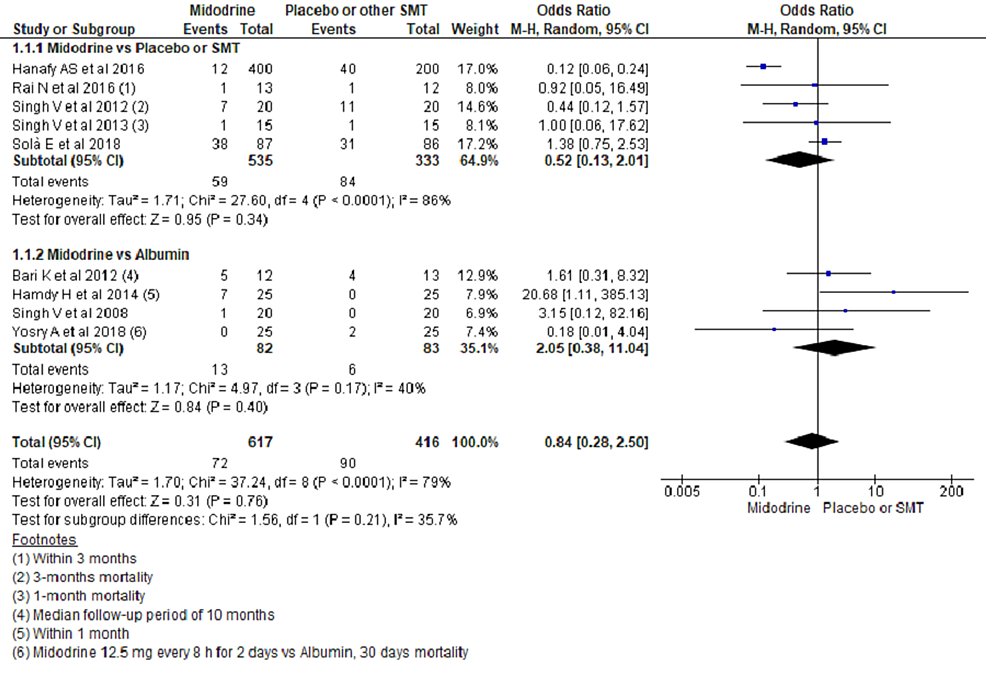 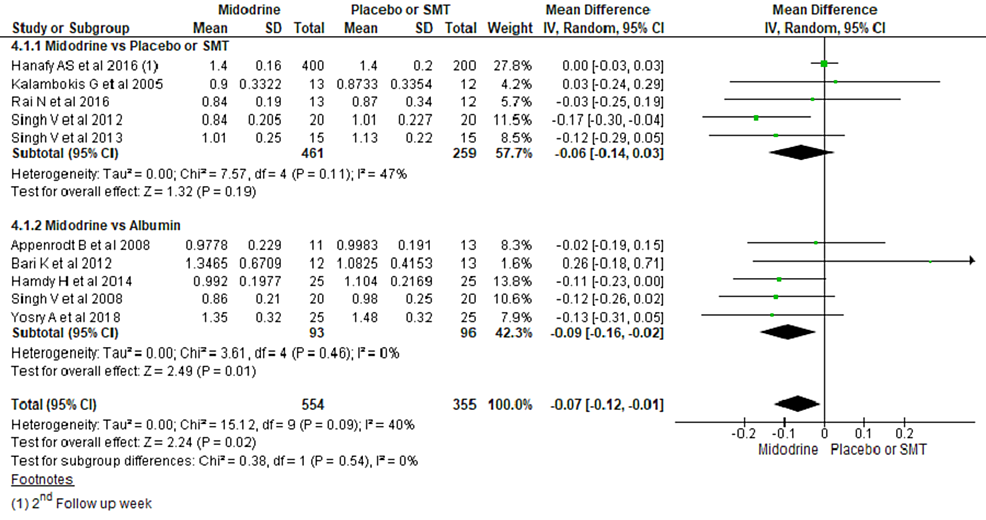 Figure 9: Forest plot showing PICD comparing midodrine with other treatments in case of ascites due to cirrhosis

Publication bias of the included studies was assessed and presented in Funnel plots. Significant publication bias was present as suggested by an asymmetry of the plot for outcomes evaluated (Figures 10-11). 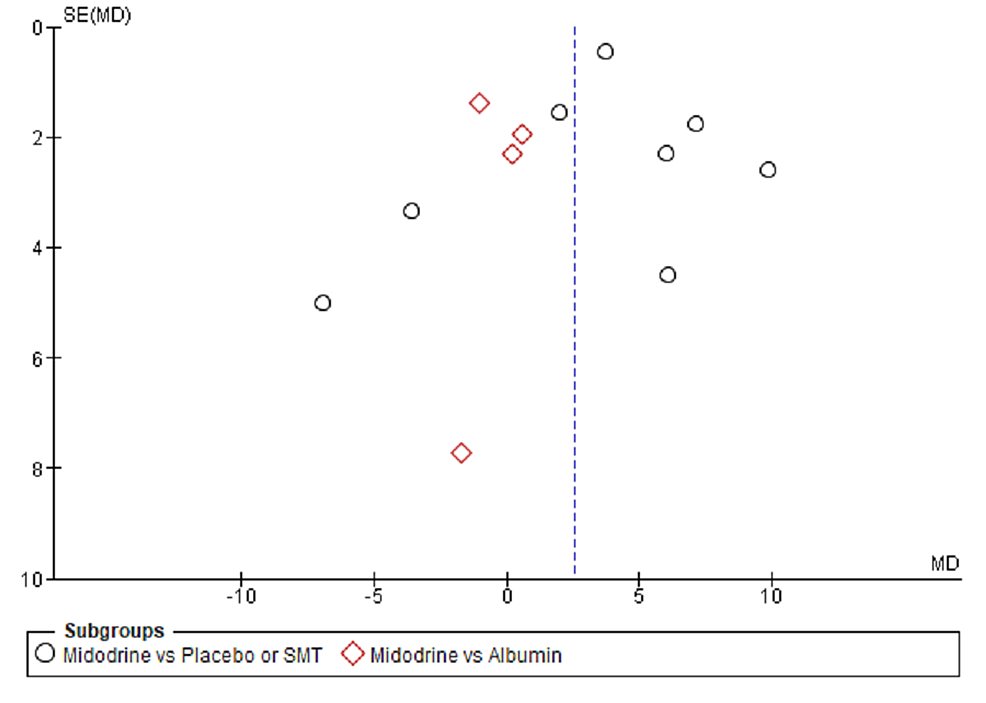 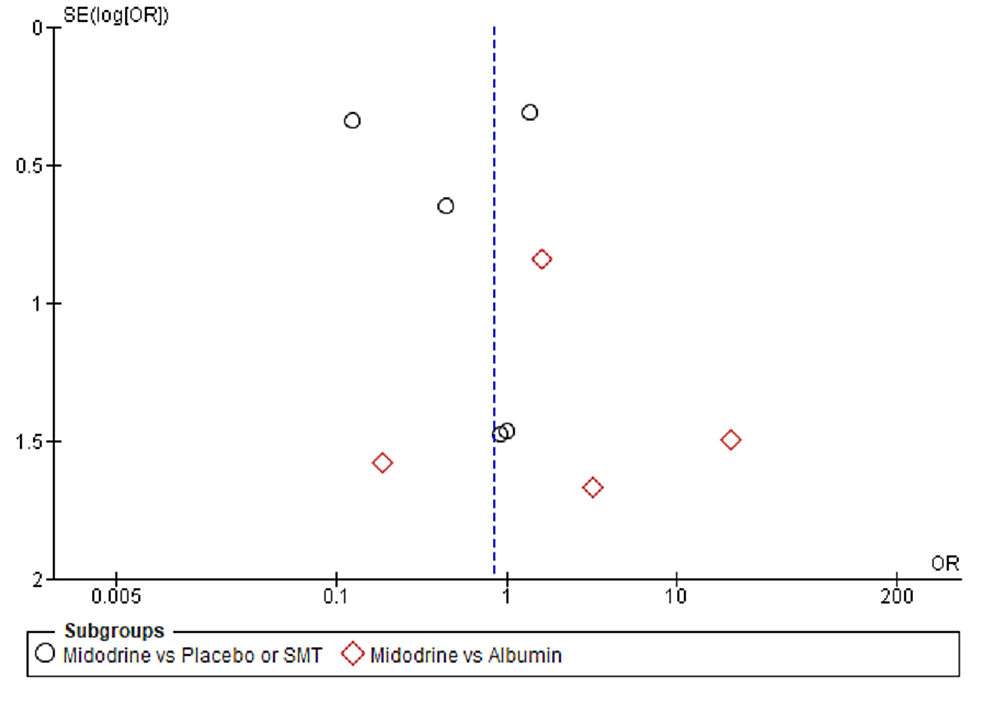 Cirrhotic ascites is usually associated with hypotension due to vasodilation mediated by low effective circulatory volume. Diuretics in such cases can further worsen renal perfusion and decrease renal sodium excretion. Midodrine is an oral vasopressor that blocks vasodilation and increases blood pressure, potentially leading to improved renal perfusion and decreased ascites [20,21,23]. This possibly leads to mortality and morbidity benefits. In this meta-analysis, we focused on the role of midodrine in combination with drugs like rifaximin, octreotide, and clonidine in cirrhotic ascites. Different studies included rifaximin, octreotide, clonidine, albumin, terlipressin, hydroxyethyl starch (HES), a combination of alternative diuretics like torsemide, amiloride, furosemide, and spironolactone, repeated large-volume paracentesis as standard medical treatment (SMT). As expected, we found significant improvement in blood pressure in patients receiving midodrine compared to standard medical treatment as a potential effect of alpha-1 mediated vasoconstriction. Midodrine use was statistically significant in lowering serum creatinine compared to albumin, however, reduction in creatinine did not reach the level of significance while compared with SMT/placebo. This is likely due to the effect of midodrine, which has been found to improve renal hemodynamics, and glomerular filtration rate (GFR) and promote sodium excretion in patients with cirrhosis [5,18,20]. In our analysis, we found midodrine to decrease plasma renin and aldosterone concentration compared to standard medical treatment alone. This is significant because this explains the beneficial effect of midodrine in paracentesis-induced circulatory dysfunction and the apparent lack of difference observed between patients treated with albumin and midodrine regarding the occurrence of PICD. Midodrine was found to improve urine output and cause weight loss in multiple studies [8,17,20]. However, the patients in these studies received concomitant diuretic therapy, which also leads to these changes, and the benefit cannot be solely credited to midodrine. We also found a significant reduction in MELD scores comparing patients treated with midodrine to standard medical treatment. A reduction in MELD scores is a possible prognostic factor for patients with cirrhosis and ascites. However, a previous study suggested reversible deterioration of MELD score with midodrine, octreotide, and albumin treatment for one month in refractory ascites [24]. This might be due to the co-administration of octreotide and midodrine for one month. Our analysis of MELD scores included studies in which patients received midodrine alone and for prolonged periods.

Our meta-analysis is the most comprehensive meta-analysis to date, including a total of 14 studies, and the second meta-analysis to evaluate the effect of midodrine in cirrhotic ascites. We have compared multiple outcomes regarding the use of midodrine in cirrhotic ascites to albumin and standard medical treatment. Terlipressin and albumin are treatments for refractory ascites, but both require intravenous access and are expensive. Our findings of midodrine being non-inferior to albumin regarding the occurrence of PICD and decrement in plasma renin and aldosterone are significant because midodrine is available in cheap oral formulation making it much easier to use.

Our study has several limitations. The endpoints for assessment of our outcomes were variable ranging from day four, day 10, one month to three months [8,18-21]. In some of the studies, patients received concomitant adjuvant treatment like octreotide [8,15], and rifaximin [6]. Another significant limitation was the wide variation in the dosage and duration of midodrine ranging from three days to months, which caused heterogeneity in the reported results. Finally, there were inherent limitations in included studies like small sample size, lack of proper randomization, short duration of midodrine treatment, etc.

Midodrine alone leads to statistically significant improvement in various clinical parameters in patients with cirrhotic ascites compared to standard medical care. At the same time, it appears to be non-inferior to albumin. We report that the addition of midodrine to SMT for diuretic-resistant cirrhotic ascites would be beneficial. The results from our study call for further well-designed studies evaluating the combination of midodrine and albumin for optimal clinical benefits.

© Copyright 2022
Shrestha et al. This is an open access article distributed under the terms of the Creative Commons Attribution License CC-BY 4.0., which permits unrestricted use, distribution, and reproduction in any medium, provided the original author and source are credited.

Figure 6: Forest plot comparing mean PAC among midodrine and other treatments in case of ascites due to cirrhosis

Figure 9: Forest plot showing PICD comparing midodrine with other treatments in case of ascites due to cirrhosis