Ptosis is a rare side effect of vincristine chemotherapy in patients treated for cancer. We report a case of a child with common B-cell acute lymphoblastic leukemia who developed bilateral moderate ptosis following the chemotherapy protocol of the United Kingdom Acute Lymphoblastic Leukemia (ALL) regimen A. The patient showed dramatic clinical improvement after a combination of oral pyridoxine and thiamine treatment. We provide a literature review of this uncommon presentation.

Vincristine is a chemotherapy agent used in pediatric patients with leukemia, lymphosarcoma, Hodgkin's disease, Wilms’ tumour, Langerhans cells histiocytosis (LCH), reticulum cell sarcoma, and neuroblastoma. Neurotoxicity is a known side effect of vincristine. Partial ophthalmoplegia, cranial nerve palsies, and mental depression are common neurological side effects of vincristine. Ptosis is an uncommon side effect. We report the case of a young child who was diagnosed with common B-cell acute lymphoblastic leukemia and developed bilateral moderate ptosis following a chemotherapy regime. The condition was treated successfully with a combination of pyridoxine and thiamine treatment.

A two-year-old child with underlying common B-cell acute lymphoblastic leukemia presented with a gradual progressive onset of bilateral drooping of the eyelids after receiving chemotherapy for ten weeks (Figure 1). The ptosis was worse in the left eye compared to the right. Prior to the presentation, she had been receiving the United Kingdom Acute Lymphoblastic Leukemia (ALL) regimen A protocol chemotherapy. This included oral dexamethasone (6.5 mg/m2/day), intramuscular L-asparaginase (6000U/m2), intravenous vincristine (1.5 mg/m2), intrathecal arabinosylcytosine (50 mg) and intrathecal methotrexate (10 mg) therapy. She completed a total of five doses of vincristine, which is equivalent to a cumulative dose of 3.5 mg vincristine (0.36 mg/kg), during the four weeks of the induction phase followed by six weeks of the consolidation phase of chemotherapy. 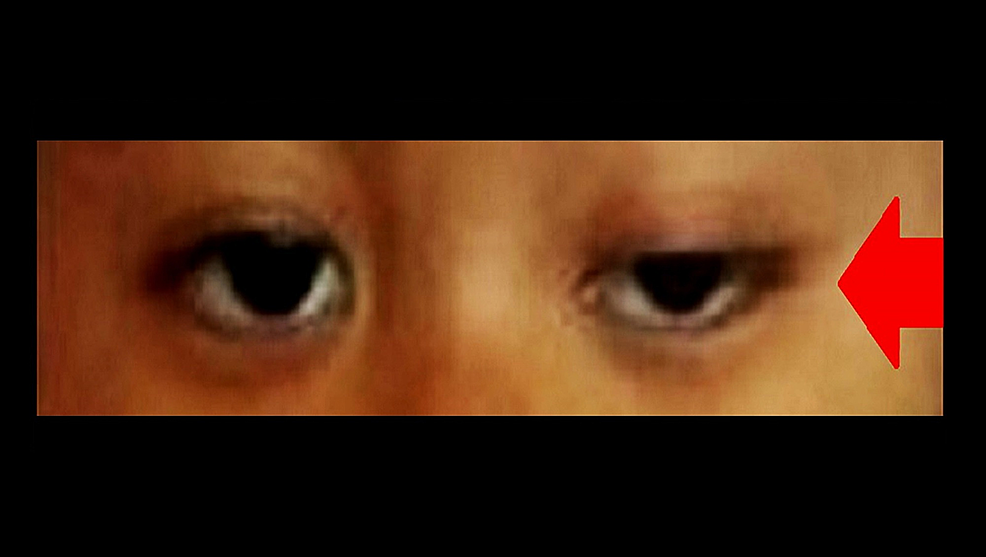 Her mother noticed that the child had difficulty reading and was frequently rubbing her eyes. The severity of ptosis was constant, and not aggravated by prolonged near activity or time of day. There was no preceding history of recent head or ocular trauma and insect bites. Both parents did not observe apparent ptosis or squint since birth. There was no history of inherited neuropathy or intake of any neurotoxic medication prior to commencing chemotherapy.

The child was able to pick up small objects rapidly without any difficulties and was able to follow objects with a steady gaze. On inspection, there was the presence of upper lid creases in both eyes. Bilateral moderate ptosis was noted, with the right eye upper lid at the upper pupillary margin while the left upper lid was already covering the visual axis. There was no abnormal head posture, eyelids scars, mass, squint, or enophthalmos. The relative afferent pupillary defect was negative. No anisocoria was observed. There was a full range of extraocular movement in both the eyes. Fatigability and Cogan lid twitch tests were negative. Marcus Gunn jaw winking sign was not demonstrable. Other examinations were within normal.

The vital signs were normal. Abdomen examination confirmed hepatosplenomegaly. There were no palpable lymph nodes. Neurological findings like deep tendon reflexes and sensibility were normal. Other cranial nerves examination was unremarkable.

The patient was treated with syrup gabapentin 100 mg twice a day, and subsequently increased to three times daily, syrup folic acid 0.25 mg once a day and one tablet of neurobion which consists of 200 mg pyridoxine hydrochloride (10 mg/kg), 100 mg thiamine disulfide (5 mg/kg), and 200 mcg cyanocobalamin (10 mg/kg) once a day. The treatment was commenced for a one-month duration. Despite the continuation of chemotherapy, bilateral ptosis markedly improved after one week of the combination of pyridoxine and thiamine treatment, and completely recovered after one month (Figures 2-3). During subsequent follow-up, there was no residual ptosis or recurrence observed. 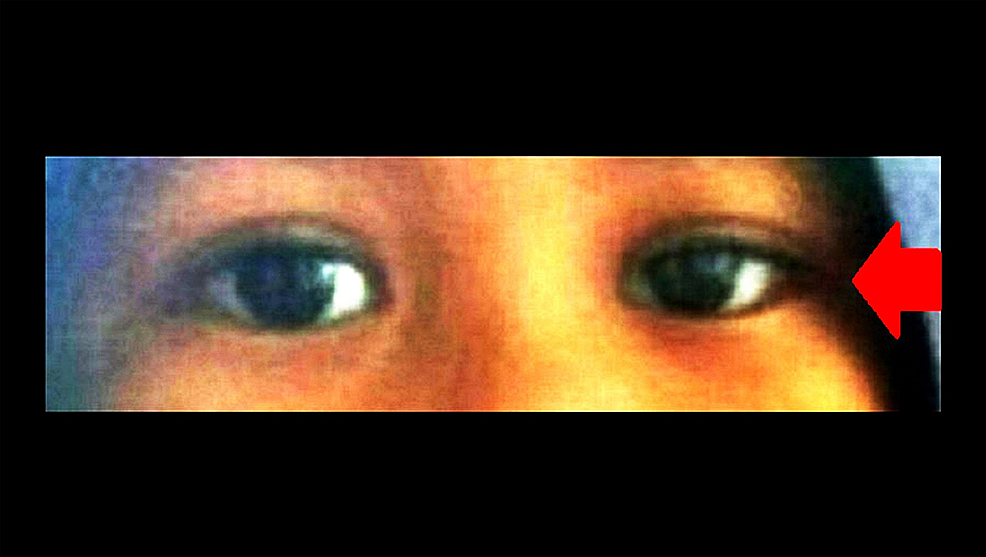 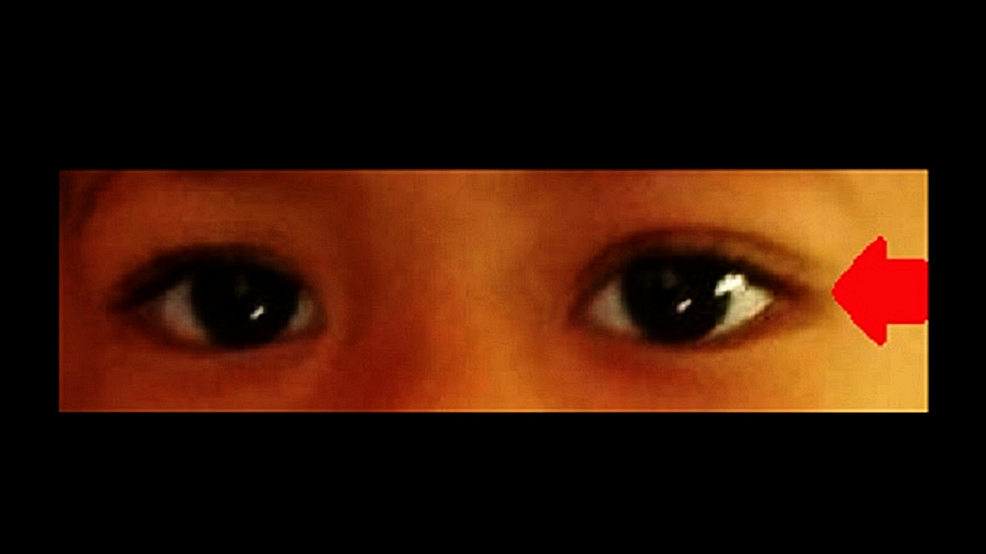 Peripheral neuropathy is observed when the cumulative dose of vincristine exceeds 6 mg/m2. The pathogenesis of vincristine-induced neuropathy is explained by vincristine which prevents microtubules and separates the chromosome pairs during mitosis. This reduces the rate of cell divisions thereby inhibiting tumour growth. Meanwhile, this causes the microtubules to lose function in the maintenance of cell shape and scaffolding, causing axonopathy through axonal transport impairment, and eventually leading to axonal degeneration and death.

Ptosis induced by vincristine post-chemotherapy is an uncommon clinical situation. Table 1 summarizes published cases of the side effects of vincristine in the literature since 2008 until 2017 including our case. The average age of patients who developed ptosis while on vincristine treatment developed ptosis between the ages of 2-11 years. Four patients developed unilateral ptosis. Three of them resolved following pyridoxine and pyridostigmine treatment [1-3]. Including our case, four patients were reported to develop bilateral ptosis alone without other neuropathy [4-6].

Similiar to Hatzipantelis, et al., our patient had bilateral ptosis post the vincristine treatment and showed significant improvement after neurobion intake which consists of pyridoxine and thiamine. The other cases were treated with a combination of pyridoxine and pyridostigmine [5-6]. The combinations are safe and effective treatment options in vincristine-induced ptosis and they speed up the recovery. The decision of initiating treatment or to be conservative in the condition of mild ptosis remains controversial.

Pyridostigmine is a synthetic quaternary ammonium agent which increases the concentration of endogenous acetylcholine by inhibiting acetylcholinesterase in the neuromuscular junction which in turn increases muscle strength [9]. Pyridostigmine has been used for vincristine-related neuropathy as a reduction of gastrointestinal motility, which is one of the major symptoms commonly found. However, it should be used with caution in patients with bronchial asthma, chronic obstructive pulmonary disease, bradycardia, and cardiac arrhythmias due to its cholinergic effect. Additional research is warranted to assess the role of thiamine, pyridoxine, and pyridostigmine in vincristine induced neuropathy recovery.

© Copyright 2017
Chai et al. This is an open access article distributed under the terms of the Creative Commons Attribution License CC-BY 3.0., which permits unrestricted use, distribution, and reproduction in any medium, provided the original author and source are credited.