Hepatic liver abscesses are often misdiagnosed on initial presentation because pyogenic liver lesions are a rare occurrence in the United States. This leads to a delay in proper treatment and results in increasing morbidity and mortality. Our case report demonstrates the atypical presentation of a hepatic liver abscess in the elderly. The source of infection was found to be periapical abscesses of the teeth, which subsequently seeded the portal blood stream of our patient. Our findings validate the potential hazard of Viridans streptococci and illustrate how untreated dental infections can serve as a reservoir for a systemic infection.

In the United States, the incidence of pyogenic liver abscess has increased from 2.7 to 4.1 per 100,000 population from 1994 to 2005 [1]. This rise in incidence could be attributed to an aging population, an increase in instrumental modalities to view the hepatobiliary tree, and an increase in hepatobiliary disease, metabolic syndromes, and liver transplantations [1]. The most common isolated pathogens, without a history of travel abroad or recent immigration to the United States, are Streptococcus species and Escherichia coli [1].

There are a limited number of case reports identifying the members of the Streptococcus milleri group as the etiology of multiple liver abscesses. The organisms Streptococcus intermedius and Streptococcus constellatus, members of the Streptococcus milleri group, typically colonize in the oropharynx, genitourinary tract, and gastrointestinal tract [2]. These bacteria are normally commensal but can cause pathological abscesses in the myocardium, pleural cavity, or in organs where surgical or endoscopic manipulation has occurred [3]. Such infections are a direct result of hematogenous spread or a direct extension of an intra-abdominal liver infection through damaged mucosa, which serves as a gateway for the bacteria to disseminate and seed the portal blood stream [2,3]. 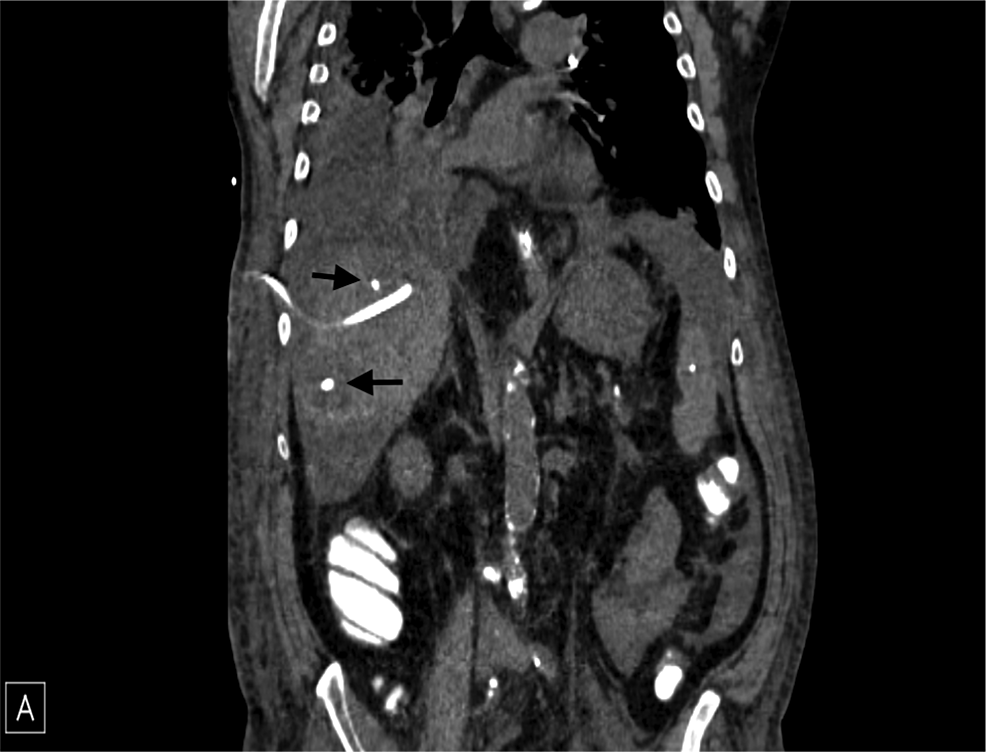 Figure 1: Computed tomography scan of the abdomen/pelvis without contrast showing intrahepatic drains near the hepatic abscesses.

IR-guided drainage of the abscesses was complicated by abscess rupture, hypotension, and septic shock resulting in endotracheal intubation and initiation of vancomycin and meropenem. Cultures from the hepatic abscesses revealed a polymicrobial infection with Streptococcus intermedius and Streptococcus constellatus. Subsequently, vancomycin was discontinued and meropenem was changed to ertapenem as coverage for pseudomonas was no longer warranted. As the isolated pathogens typically colonize the oropharyngeal region, further investigations focused on the thoracic and facial regions. A transesophageal echocardiogram was unremarkable for vegetations or shunts; however, a maxillofacial CT scan (Figure 2) revealed multiple maxillary teeth abscesses. 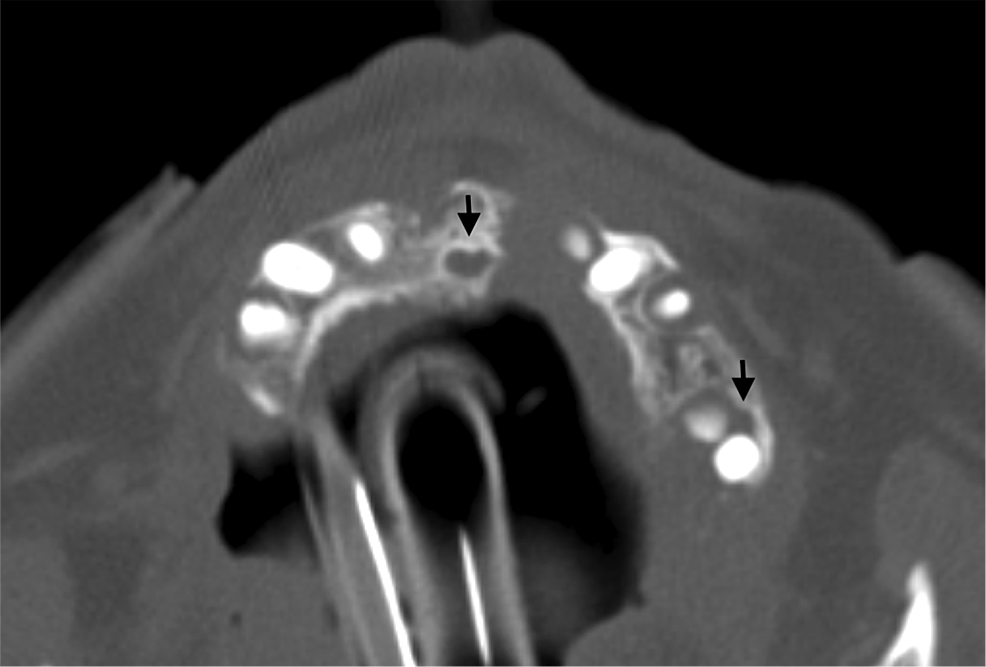 Unfortunately, the patient passed away due to worsening septic shock. Furthermore, because the patient’s family declined autopsy, no tissue was available to confirm the source of infection.

Due to their relatively low prevalence in the elderly population, hepatic abscesses are frequently omitted as a cause of abdominal pain by health care professionals. However, this trend appears to be shifting as the annual incidence of hospitalization for pyogenic liver abscess in the United States is rising [1,4]. Patients over the age of 65 are 10 times more likely to acquire a pyogenic liver abscess than younger patients, and men are at an increased risk for developing a pyogenic liver abscess as compared to women across all age groups [4]. A missed hepatic abscess results in a delayed treatment likely leading to increased morbidity and mortality in this fragile population.

Clinical presentation of hepatic lesions varies based on the location and size of the abscess. The classic triad of fever, RUQ pain or fullness, and jaundice is rarely seen. Instead, a broad range of symptoms including nausea, vomiting, malaise, and/or weight loss may be the presenting chief complaint(s) [5]. Infections from the Streptococcus species tend to follow this indolent course of nonspecific symptoms, which may result in a failure to identify the source of infection.

Due to vague presenting symptoms, laboratory values may be required to suggest a diagnosis [5]. Typically, hypoalbuminemia, elevated transaminases, and leukocytosis are prominent in patients with hepatic lesions [5]. The initial diagnostic test used to assess RUQ abdominal complaints is an ultrasound. However, CT imaging has increased sensitivity and thus is the most accurate way to diagnose a pyogenic liver abscess [4,5]. Although imaging modalities are sensitive to confirm the pathology of a liver abscess, microbiological analysis is essential to identify the causative agent(s) and to inform the proper antibiotic management plan [5]. Prior to cultures, initial antibiotic treatment is centered on a broad-spectrum polymicrobial approach and the regimen tailored as the culture reports are finalized. Although multiple antibiotic regimens exist, they should include an extended spectrum βeta-lactam or a combination of a third-generation cephalosporin or fluoroquinolone and metronidazole [6].

After extensive investigation, the periapical tooth abscesses were considered to be the leading source of the liver abscesses in the absence of an autopsy. The pathogens Streptococcus intermedius and Streptococcus constellatus cultured from the patient’s liver abscesses are commensal mouth flora. The infectious and inflammatory processes surrounding the maxillary teeth may have provided a portal of entry into the venous system and then subsequently seeded the hepatic artery by the arterial circulation.

This case illustrates the potential ramifications of untreated dental infections and explores the need for preventing dental infections in order to prevent systemtic infection and/or liver abscesses. Neumayr el al. demonstrated a clinical improvement (defined as decreasing leukocytosis and C-reactive protein) in an 18-year-old immunocompetent patient with multiple liver abscesses after the source, an infected molar, was extracted [7]. Furthermore, sonographic imaging of the liver abscesses showed regression of the abscesses’ cavity sizes after extraction of the source [7]. Unfortunately, source control was not obtained in our patient as he passed away before dental extraction and culture of the periapical abscesses were performed.

It is important to realize that a pyogenic liver abscess is confirmed or suspected at the time of admission in less than one third of the cases [4]. Often an intra-abdominal process is not even considered in the differential due to the nonspecific clinical presentation until after the patient fails to respond to medical therapy and additional ultrasound or CT is ordered [4]. This delay in appropriate treatment of pyogenic liver abscesses results in significant morbidity and mortality as demonstrated by our case report.

This case serves to highlight the importance of having a low threshold of suspicion in an elderly patient presenting with atypical abdominal pain and concerning laboratory values (e.g., hypoalbuminemia, elevated transaminases, and/or leukocytosis). It is important to perform a thorough physical exam (e.g. oral mucosa exam) to evaluate for all possible etiologies for infectious sources. Poor dental hygiene although seemingly benign can lead to significant ramifications in the elderly. Physicians should also consider imaging to rule out liver lesion(s) in these patients to prevent complications and fatal decompensation in the elderly population.

Human subjects: Consent was obtained by all participants in this study. Not applicable issued approval NA. The patient passed away before consent could be obtained. Several attempts to contact the patient's wife (phone calls and a letter sent by USPS based on our records we had from the VA) were made but we were unable to get in touch with her to gain consent. We never received a response to our letter and the number listed in our records was no longer in service. Conflicts of interest: In compliance with the ICMJE uniform disclosure form, all authors declare the following: Payment/services info: All authors have declared that no financial support was received from any organization for the submitted work. Financial relationships: All authors have declared that they have no financial relationships at present or within the previous three years with any organizations that might have an interest in the submitted work. Other relationships: All authors have declared that there are no other relationships or activities that could appear to have influenced the submitted work.

© Copyright 2018
Rainwater et al. This is an open access article distributed under the terms of the Creative Commons Attribution License CC-BY 3.0., which permits unrestricted use, distribution, and reproduction in any medium, provided the original author and source are credited.

Figure 1: Computed tomography scan of the abdomen/pelvis without contrast showing intrahepatic drains near the hepatic abscesses.