Complete hindgut duplication is a rare and intriguing entity, often coupled with genitourinary abnormalities and neural tube defects. The diagnosis demands a thorough clinical exam and radiological workup. Timely recognition and expeditious treatment of these patients can lead to a better quality of life. We present a case of a 10-month-old female with complete hindgut duplication and associated genitourinary duplication treated with surgical intervention.

Gastrointestinal (GI) duplications are a rare occurrence and may involve any part of the alimentary tract. The diverse clinical presentations depend on the size, site, and type of duplication. Complete hindgut duplication, an extremely rare condition, often presents with associated genitourinary duplications.

We present a case of total duplication of the hindgut. The patient also had a duplication of the genitourinary system. A review of the literature revealed only a handful of patients with the same condition. One case reported by Schatz had a complete duplication of bladder, urethra, vagina, uterus, and anus [1]. The management of duplications varies greatly according to the anomalous anatomy. If surgical management is not undertaken, a possibility of neoplastic change should not be ruled out [2]. What makes our case more unique is that our patient had an associated situs inversus, which to the best of our knowledge, has not been reported with any case of hindgut and genitourinary duplication. The purpose of our study is to identify this rare set of associated conditions early because prompt surgical treatment has shown a favorable prognosis and better quality of life for patients. Informed consent statement was obtained for this study. 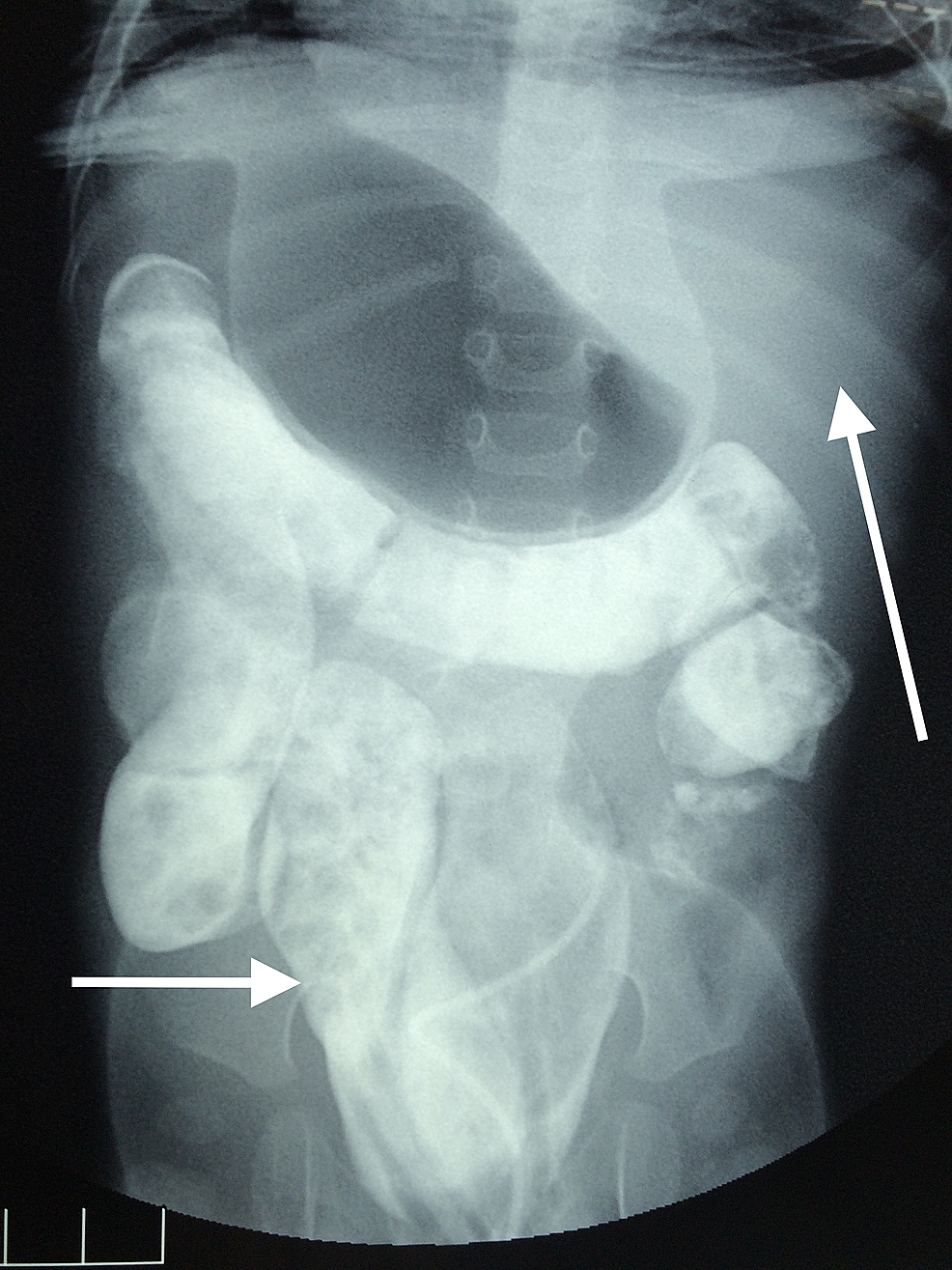 On the basis of history, physical examination and investigations, a diagnosis of hindgut duplication were made and examination under anesthesia (EUA) and exploratory laparotomy (EL) was planned. During EUA, six perineal openings (duplicated vagina, urethra and anus) were revealed as shown in Figure 2. 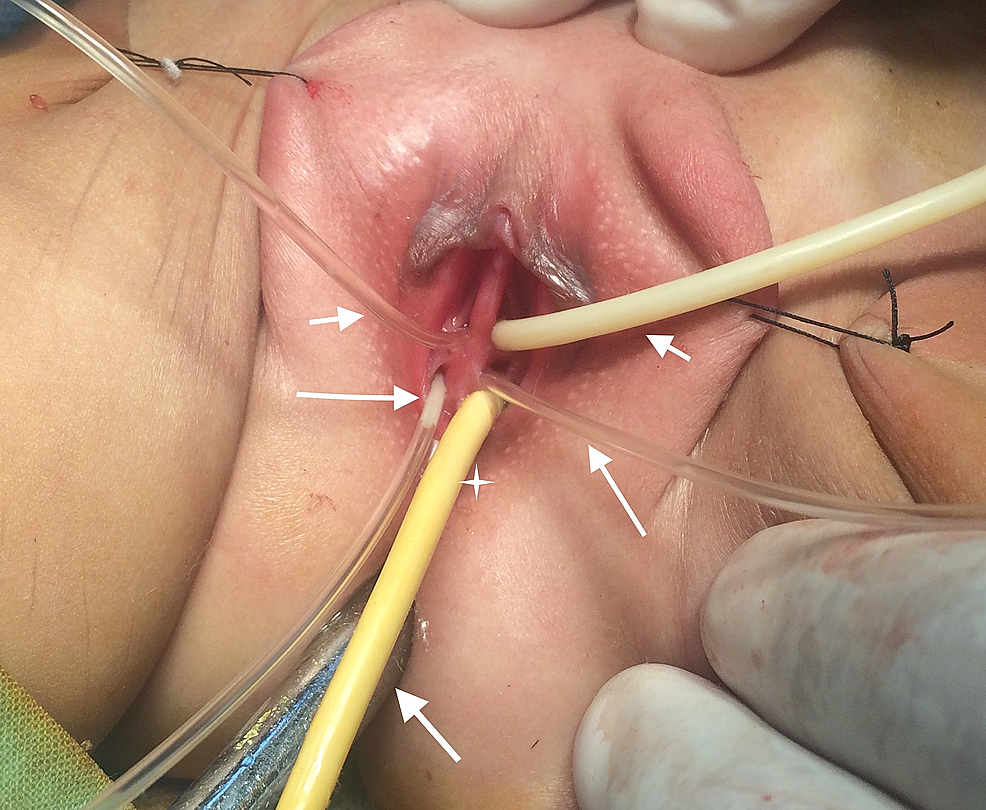 On contrast studies two urinary bladders and two vaginas were visible. EL revealed duplication of hindgut from anus till cecum/appendix as seen in Figure 3. 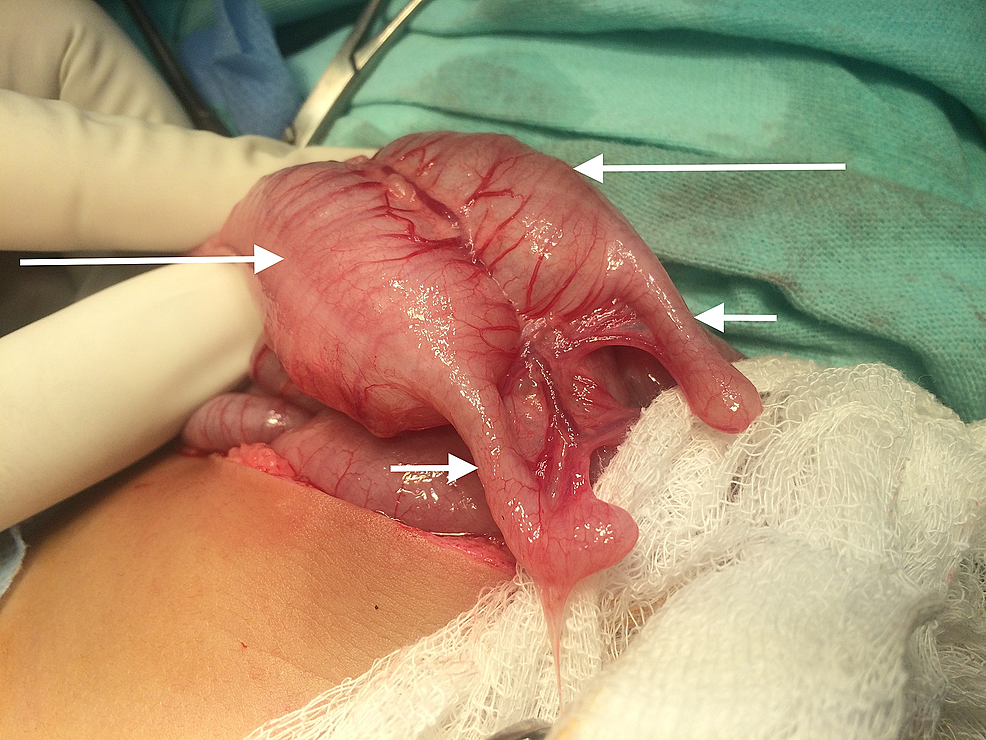 Distally, the ectopic anus was excised and proximally the duplicated gut was internally drained into the normal rectum. The septum between the two rectums was divided with linear cutter stapling device to create one single sigmoid and rectum. The septum between the two bladders was divided and converted to a single lumen viscera. The patient had an uneventful postoperative period and was discharged on the fifth postoperative day with a follow-up plan of care.

Gastrointestinal (GI) duplications are a very uncommon, but complex set of embryological disorders can involve any part of the alimentary canal from the tongue to the anus. Duplications of any kind share a few common characteristics. They are hollow, lined with gastrointestinal tract epithelium and have a smooth muscle wall.

GI duplications were initially believed to be more common in males as compared to females but it was later confirmed by a study that there is an equal male to female ratio [1]. Colonic duplications account for 15% [3] and rectal duplications for 5% [4]. The exact pathogenesis of duplications is unknown and multiple theories have been put forward. According to the most credible theory, as the rapidly growing endothelial cells occlude the intestinal lumen, vacuoles form inside the cell masses due to the growth of the intestine. These vacuoles fuse to create a single lumen intestine. If one of these vacuoles pinches off, they can create a secondary lumen, which may entirely be separated from the main lumen but grows in proportion to the main lumen [5].

Colonic duplications can be cystic or tubular involving a limited portion of the colon or be extensive. They are usually divided into two types, type I and II. Type I usually has partial involvement of the colon or rectum while type II has a wider spectrum as in addition to colon and rectum, there can also be associated congenital anomalies including duplication of the lower genitourinary tract, double appendices, situs inversus and neural tube defects [5].

The presentation of this condition might vary greatly from patient to patient depending upon the degree of and site of duplication. In a colonic or anal duplication, the patients are usually asymptomatic. If symptomatic, a colonic duplication can cause symptoms related to an obstruction such as abdominal pain, distention, and constipation. There can be concurrent fistulas in tubular colonic duplications with other surrounding structures or hollow viscera such as vagina, vulva, perineum and urinary tract. Without a fistula, there can be a distention of the duplicated gut distally. In our patient, there was a presence of a recto-vaginal fistula, which presented as fecal discharge from the vagina initially. The patient also had mild progressive abdominal distention afterward.

Urogenital duplication can present as a separate entity or in association with hindgut duplication. The constellation of these associated abnormalities can be explained by "partial twinning" of the caudal end of the embryo or abnormal development of urorectal septum [6]. Duplication can either be complete or partial and can occur in any part of the urogenital tract including bladder, urethra, and vagina. Although duplication may occur in the sagittal or coronal plane, it is more commonly seen in the former. The anatomy of urogenital duplications determines if a patient presents earlier or later in life. With earlier presentations, urinary tract infections, obstructions, and voiding difficulties are usually seen. With later presentations, the patients remain largely asymptomatic and occasionally present with infertility [7-8].

Various diagnostic modalities are available for the diagnosis of GI duplications. Ultrasonography and contrast studies are most widely used. Computed tomography (CT) and magnetic resonance imaging (MRI), although less often used, are helpful in localizing and diagnosing complex duplications [9]. Treatment of duplications largely depends on whether or not a patient is symptomatic. Generally, a conservative approach is followed if no symptoms are seen. If surgery is considered, the primary objective is to treat the patient's symptoms rather than correct the anatomical abnormality. The choice of surgery depends upon two important factors. Firstly, care should be taken not to affect the blood supply of the normal bowel as the duplicated segment might share its blood supply with the normal bowel segment. Secondly, the internal drainage of the duplicated segment containing ectopic gastric mucosa can lead to gastrointestinal bleeding. Cystic duplications are easier to excise because their site of involvement is limited while tubular duplications need as extensive resection [10].

© Copyright 2017
Haq et al. This is an open access article distributed under the terms of the Creative Commons Attribution License CC-BY 3.0., which permits unrestricted use, distribution, and reproduction in any medium, provided the original author and source are credited.