Erythema nodosum is septal panniculitis characterized by erythematous nodules on the lower extremities. It can occur as an idiopathic skin disease. However, it is often the cutaneous stigmata of a systemic condition or drug-adverse effect [1-13].

Tuberculosis is a mycobacterial infection that is endemic in certain areas of the world, such as Southeast Asia, India, and South Africa. It clinically presents with chronic cough, sputum production, chest pain, or shortness of breath. Often, systemic symptoms, such as fever, night sweats, weight loss, and fatigue, are present [14,15].

A 59-year-old Vietnamese woman presented with a six-week history of red and painful swollen nodules on the distal legs; she denied other symptoms of cough, dysuria, fatigue, fever, malaise, sore throat, and weight loss. Her primary care physician suspected cellulitis and prescribed a 10-day course of doxycycline 100 mg twice per day. He also referred her to be evaluated by a dermatologist.

Her past medical history is significant for attention-deficit/hyperactivity disorder, herpes zoster, hypertension, migraines, obesity, and seborrheic dermatitis. She never received the Bacillus Calmette-Guérin (BCG) vaccine, and she lives with her husband and daughter. She has been on clonidine and amlodipine for hypertension for several months, and no new medications before the onset of her skin lesions had been initiated. A colonoscopy performed a year ago only observed normal findings.

Cutaneous examination revealed tender hyperpigmented nodules on the bilateral distal lower extremities near the ankles. There was desquamation of the skin overlying some of the areas of resolving redness (Figures 1, 2). Based on the clinical presentation, a diagnosis of erythema nodosum was established. 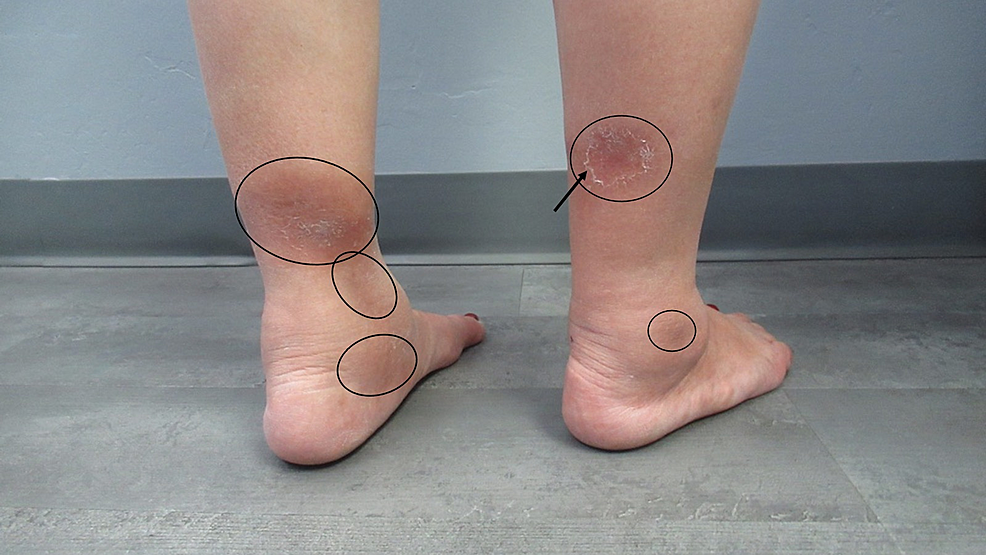 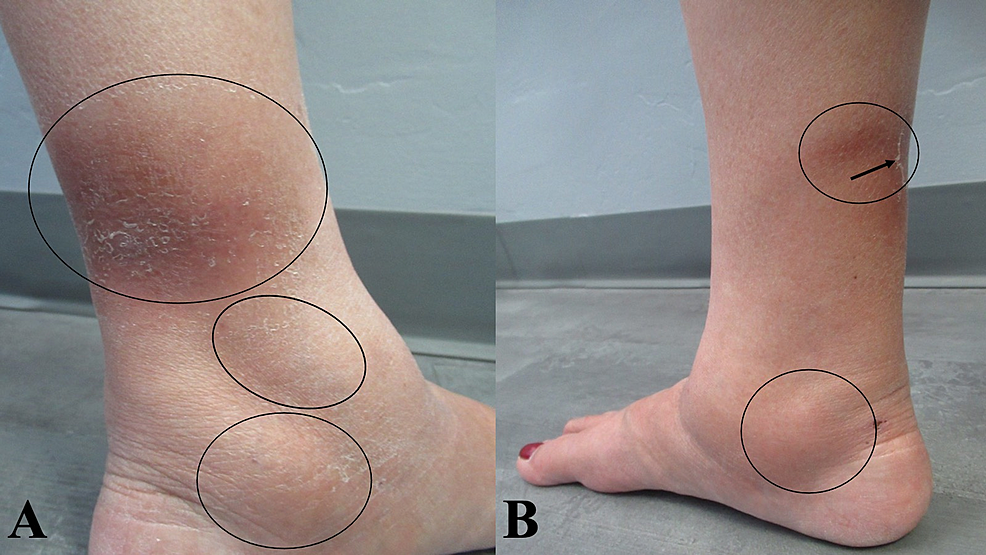 Correlation of the clinical presentation with laboratory studies suggested a diagnosis of tuberculosis-associated erythema nodosum. She was evaluated by an infectious disease specialist who confirmed the diagnosis of latent tuberculosis; her abnormal chest roentgenogram was not considered to be related to tuberculosis. Daily treatment was initiated with isoniazid 300 mg and pyridoxine 50 mg for a planned duration of six months. At follow-up two months later, there were no new erythema nodosum lesions. All of her lesions had flattened with residual post-inflammatory hyperpigmentation.

Erythema nodosum is considered type IV delayed hypersensitivity response to various antigens. Even though its pathogenesis is not fully understood, evidence suggests that the mechanism involves immune complex deposition in the septal venules of the subcutaneous fat, neutrophil recruitment with the production of reactive oxygen intermediates, and tumor necrosis factor (TNF), and granuloma formation. Erythema nodosum typically presents on distal lower extremities as painful tender nodules; however, in some individuals, the lesions are located more diffusely. Similar to our patient, it can be misdiagnosed as cellulitis and treated-often unsuccessfully-with oral antibiotics [1,12].

The diagnosis of erythema nodosum is often made clinically. A biopsy can be performed to confirm septal panniculitis and exclude other possibilities. If a skin biopsy is performed for microscopic evaluation, consideration for sending additional specimens that have not been placed in formalin for tissue culture (such as bacterial, fungal, mycobacterial) should be entertained [1,11].

Once the diagnosis of erythema nodosum is established, additional evaluation to determine if there is an associated etiology should be considered. Currently, there is no standard workup for patients with erythema nodosum. Similar to our patient, it is reasonable to do the following tests: beta-human chorionic gonadotropin blood test (in women), complete blood count, comprehensive metabolic serum panel, erythrocyte sedimentation rate, thyroid function tests (thyroid-stimulating hormone [TSH], thyroxine [T4], and triiodothyronine [T3]), stool culture (for bacteria), and a tuberculosis skin test (PPD) or QuantiFERON. Infectious etiologies should also be ruled out by testing for human immunodeficiency virus, hepatitis B antigen, hepatitis C antibody, and antistreptolysin O; a chest roentgenogram may be considered to evaluate for lymphoma, sarcoidosis, and tuberculosis. In addition, a colonoscopy may be performed to evaluate for inflammatory bowel diseases such as Crohn’s disease and ulcerative colitis [1-13].

c This is the percent of infection-associated erythema nodosum patients in whom the infection was tuberculosis.

The active disease occurs when the tuberculosis bacteria overcome the immune system and begin multiplying in the body. Those with active disease are infectious and symptomatic. Key symptoms include chest pain, chills, chronic cough, fatigue, fever, hemoptysis, night sweats, and weight loss. Individuals may also have abnormal chest radiography or a positive sputum smear or culture [14].

There is no gold standard diagnostic test for latent tuberculosis, but it can be diagnosed indirectly with either a tuberculin skin test or an interferon-gamma release assay, which examines the cellular immune response to mycobacterial antigens. Given these two tests are unable to distinguish between latent and active tuberculosis, the gold standard for diagnosis of active tuberculosis is a sputum culture. Supplementary diagnostic tools include nucleic acid amplification testing, imaging, and histopathological examination of biopsy samples [15].

Our patient presented with erythema nodosum. The diagnostic evaluation was significant for an elevated C-reactive protein and a positive QuantiFERON. Her chest roentgenogram showed a mild right middle lobe infiltrate; it was not considered to be tuberculosis-related since her sputum culture was negative. She was referred to an infectious disease specialist who confirmed the diagnosis of latent tuberculosis, and treatment with anti-mycobacterial therapy was initiated. She has not had any new or recurrent erythema nodosum lesions.

Human subjects: Consent was obtained or waived by all participants in this study. Conflicts of interest: In compliance with the ICMJE uniform disclosure form, all authors declare the following: Payment/services info: All authors have declared that no financial support was received from any organization for the submitted work. Financial relationships: Philip R. Cohen, MD declare(s) personal fees from ParaPRO. Dr. Cohen is a consultant for ParaPRO. Other relationships: All authors have declared that there are no other relationships or activities that could appear to have influenced the submitted work.

© Copyright 2021
Laborada et al. This is an open access article distributed under the terms of the Creative Commons Attribution License CC-BY 4.0., which permits unrestricted use, distribution, and reproduction in any medium, provided the original author and source are credited.

c This is the percent of infection-associated erythema nodosum patients in whom the infection was tuberculosis.