Atypical choroid plexus papilloma (aCPP) is very rarely seen in adults. Here, we present the case of a 47-year-old male with several months of headache, nausea, dizziness, and imbalance who was found to have an enhancing mass of the fourth ventricle with imaging findings suggestive of likely ependymoma. The patient underwent suboccipital craniotomy with C1 laminectomy and telovelar approach for gross-total resection of the lesion, with final pathology demonstrating WHO grade II aCPP. Subsequent genomic analysis showed a biologically relevant TERT mutation, as well as several variants of unknown significance. We conclude that aCPP is a rare, benign entity diagnosed by tissue sample that is potentially curative with surgical resection and may harbor targetable genetic mutations.

Choroid plexus papilloma (CPP) is a rare benign neoplasm of the choroid plexus, accounting for less than 1% of all intracranial neoplasms in adults. Depending on location, the clinical presentation of CPP may include signs/symptoms of obstructive hydrocephalus, vertigo, diplopia, lateral gaze palsies, and visual field defects [1]. CPPs with histopathological features suggestive of higher mitotic activity but without hallmarks of malignancy are classified as atypical (aCPP). Adult aCPPs are very rare tumors typically localized to the fourth ventricle [2]. Maximal safe resection is the primary treatment and gross-total resection (GTR) is often curative for grade I lesions with low recurrence rates [3].

Here, we present the case of a fourth ventricular aCPP in an adult patient. We discuss the pertinent clinical, operative, and histopathological findings, as well as the results and implications of associated next-generation sequencing (NGS).

A 47-year-old male presented with a 2-month history of head pressure, nausea, dizziness, and tandem gait imbalance. The review of symptoms was negative for diplopia, sensory abnormalities, and limb weakness. Magnetic resonance imaging (MRI) demonstrated a 2.6 cm well-circumscribed contrast-enhancing mass of the fourth ventricle with extension into the right foramen of Luschka without radiographic evidence of hydrocephalus (Figure 1). Spinal MRI was negative for drop metastases. 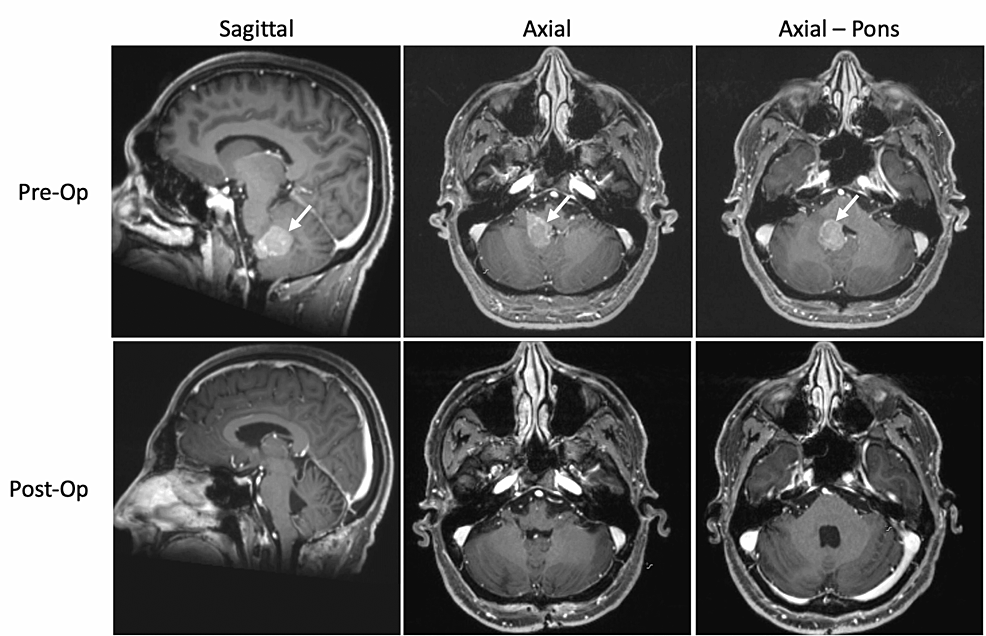 Preoperative T1-weighted MRI reveals a 2.6 cm enhancing fourth ventricular mass (white arrows), with extension to the right foramen of Luschka. There is a mass effect on the ipsilateral medulla without evidence of obstructive hydrocephalus. Postoperative MRI demonstrates image complete, gross-total resection of the tumor.

The patient underwent suboccipital craniotomy and C1 laminectomy with subsequent telovelar approach to the fourth ventricle for tumor resection. The right-eccentric tumor was dissected off the floor of the fourth ventricle, cerebellar peduncle, and the tela. The tumor was debulked and followed laterally all the way to the foramen of Luschka. The cerebellopontine angle with cranial nerve IX was visualized at the end of the resection through the expanded foramen of Luschka. The tumor was quite vascular and had significant areas of attachment to the lateral border of the brainstem, tela, and right cerebellar peduncle. The frozen section returned as likely ependymoma. 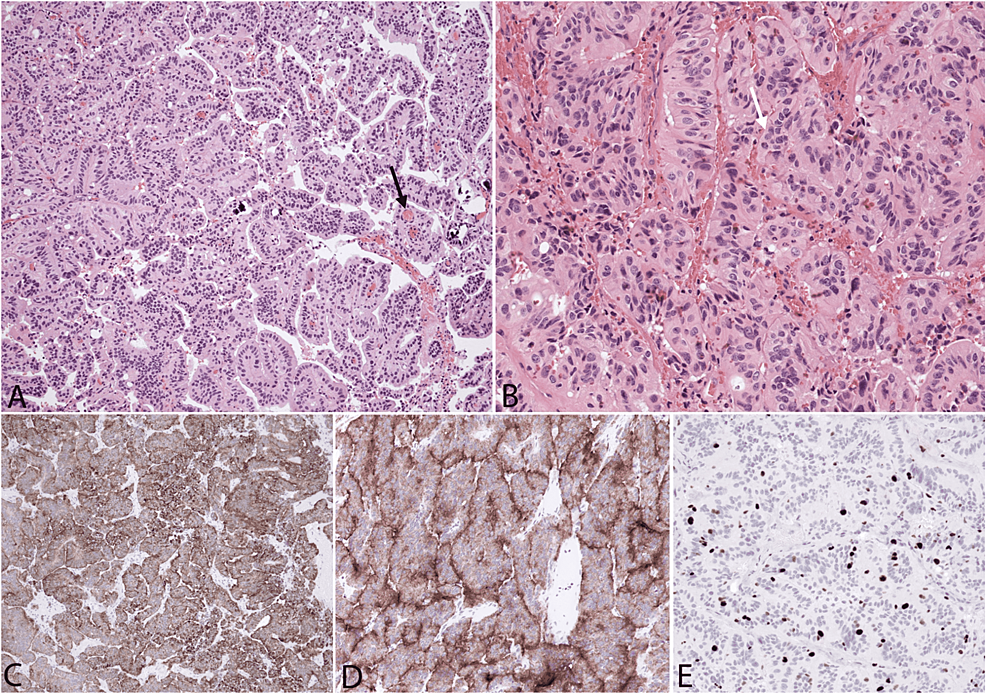 The patient remains recurrence-free as of his last one-year postoperative follow-up visit. He is able to ambulate normally and is back to work full time. His diplopia has also completely resolved. He continues to have right-sided hearing loss.

According to the WHO, CPPs are graded from I to III based on specific histological criteria, with benign CPPs classified as grade I and malignant choroid plexus carcinomas (CPCs) as grade III. Atypical CPPs, first recognized as a distinct entity in 2007 and classified as grade II, are intermediary tumors that exhibit characteristics of both benign CPPs and CPCs [8]. Histologically, aCPPs typically exhibit increased mitotic factors defined as greater than two mitoses per 10 high-powered fields, undefined papillary patterns, and moderate nuclear polymorphisms [9]. Although the number of mitotic bodies observed in our patient was below this threshold, his tumor was classified as grade II given the presence of pleomorphic nuclei with perivascular arrangements of nuclear polymorphisms, as well as foci of necrosis, without hallmark features of malignancy [5]. Of note, Jeibmann et al. reported the recurrence rate of aCPPs as 29%, compared to 6% in benign grade I lesions, with increased mitotic activity a predictor for recurrence [4,10].

The Tempus xT assay is an oncological testing panel that utilizes NGS to detect genomic alterations in 648 genes and aid in the selection of targeted therapies. It reveals both genetic variations of biological relevance, which produce functionally significant genetic alterations, and variants of unknown significance, whose alterations have an unclear effect on oncogenesis. Our patient’s assay revealed five mutations of unknown significance, namely KMT2D, UGP2, FCGR2A, and two mutations of ZFHX3 in a splice region. In addition, there was one biologically relevant mutation in TERT.

Understanding the function of these genes allows for extrapolation regarding their potential contribution to features of our patient’s tumor. The growth of the aCPP might, in part, be attributed to a mutation in the KMT2D gene, which encodes a histone methyltransferase that is part of a protein complex regulating the transcription of estrogen receptor genes. KMT2D has been reported as an essential mutation for cancer cell survival, as its depletion improves chemotherapeutic sensitivity [11]. UGP2 codes for an essential enzyme in nucleotide sugar metabolism and is responsible for catalyzing the conversion of glucose-1-phosphate to uridine diphosphate (UDP)-glucose. Oncogenic mechanisms involving UGP2 gain-of-function mutations result in higher intracellular glycogen levels and overactivation of estimated glomerular filtration rate (EGFR) targets via N-acetylation [12]. The FCGR2A gene is part of a family of immunoglobulin Fc receptor genes, which encodes a cell surface receptor found on phagocytic cells. The FCGR2A mutation identified in our patient’s tumor might therefore have contributed to the foci of tissue necrosis seen in pathology, a critical component in its classification as an atypical lesion [10]. Finally, ZFHX3 encodes a protein that regulates neuronal differentiation and tumor suppression, a mutation of which might have, in part, facilitated unregulated and aberrantly differentiated cell growth in this case [13].

Mutation in the promoter region of the TERT gene leads to overexpression of telomerase in 85-90% of human malignancies [14]. Activation of TERT has been shown to increase proliferation and resist apoptosis [15]. Furthermore, TERT mutations are highly associated with central nervous system (CNS) tumors, and in particular with unfavorable outcomes in choroid plexus tumors. Currently, there are no direct TERT inhibitors, but drugs targeting the TERT pathway are under investigation [16]. Each of the mutations described above represents a potential pathogenic mechanism and a commensurate therapeutic target. Thus, the Tempus xT assay and NGS may ultimately allow for personalized therapeutic approaches to treat rare tumors like aCPPs, especially in cases of tumor recurrence after initial surgical resection.

Beyond personalized treatment strategies, other newer treatment paradigms exist which may be considered in patients with aCPPs. Immunotherapeutic agents, in particular immune checkpoint inhibitors, now play an integral role in the medical management of a variety of different cancers including lung cancer, renal cell carcinoma, and melanoma, and their potential benefit in CNS malignancies is being widely studied [17]. This is, in part, based on recent studies elucidating the lymphatic architecture of the brain, which demonstrate that T cells traffic via meningeal blood vessels into CSF spaces and ultimately into the brain parenchyma via the choroid plexus [18,19]. Therefore, there is the potential for T cell-mediated therapies to play a role in the management of CNS tumors like choroid plexus malignancies. Although immunotherapy is not yet the standard of care, further investigation is underway, notably a phase II trial studying the effect of nivolumab, a programmed death (PD-1) inhibitor, in the treatment of recurrent select rare CNS cancers including aCPPs (NCT03173950) [20].

This work presents a 47-year-old male patient presenting with a history of head pressure, nausea, dizziness, and tandem gait imbalance. Preoperative imaging demonstrated a 2.6 cm mass of the fourth ventricle with hydrocephalus, which was characterized as an atypical CPP on histological analysis and a TERT mutation on Tempus NGS. The patient underwent suboccipital craniotomy with C1 laminectomy, followed by a telovelar approach to the fourth ventricle to achieve GTR. Minimal postoperative complications were noted and compared to traditional approaches such as transvermian, strengthening the potential utility of the telovelar surgical approach.

This case report also demonstrates the use of next-generation DNA sequencing to better understand the tumor’s genetic profile. Doing so allows for targeted molecular therapies to be used and improve precision-based approaches to intracranial tumor management. Finally, this report also exemplifies the importance of comprehensive histopathological examination of tissue specimens for accurate diagnosis.

The authors would like to acknowledge Anamika Patel for their assistance in media preparation.

© Copyright 2022
Goel et al. This is an open access article distributed under the terms of the Creative Commons Attribution License CC-BY 4.0., which permits unrestricted use, distribution, and reproduction in any medium, provided the original author and source are credited.

Preoperative T1-weighted MRI reveals a 2.6 cm enhancing fourth ventricular mass (white arrows), with extension to the right foramen of Luschka. There is a mass effect on the ipsilateral medulla without evidence of obstructive hydrocephalus. Postoperative MRI demonstrates image complete, gross-total resection of the tumor.