The prognosis after ischemic stroke has always been a concern for the patients, their families, and the treating neurologists. This information is crucial in setting the management plan. Also, such information helps the researchers in the field of stroke to select the suitable patients in the clinical trials and to define the clinical endpoints [1]. A valid measure of outcome helps to reduce the time and cost of stroke trials [2]. The predictive models depend on the clinical features and investigatory tools such as brain imaging.

Complete medical history was reviewed including age, gender and vascular risk factors such as hypertension (defined as history of use of antihypertensive medications or if systolic blood pressure was > 140 mmHg, diastolic blood pressure > 90 mmHg, or both during admission for four days at least), diabetes mellitus (defined as history of use of insulin or oral hypoglycemic agents or if blood glucose level was ≥ 126 mg/dl after an overnight fast or if it was ≥ 200 mg/dl after two hours from ingestion of 75 gms of oral glucose for at least two separate occasions).

Stroke severity was evaluated on admission using the NIHSS. Stroke subtypes were defined using the Trial of ORG 10172 in Acute Stroke Treatment (TOAST) criteria into one of five categories based on risk factors, as well as clinical and brain imaging features: large artery atherosclerosis, cardioembolism, small vessel occlusion (lacunar), undetermined etiology stroke or other aetiology [13-14].

Forty-two patients were excluded from the statistical analysis due to missing endpoint values, including patients with terminal illness and patients who missed three months follow-up mRS, and those who could not be tracked or refused to participate.

Inferential analyses were done for quantitative variables using independent T-test in cases of two independent groups with parametric data and Mann-Whitney U test in cases of two independent groups with non-parametric data. In qualitative data, inferential analyses for independent variables were done using Chi-square test for differences between proportions and Fisher’s exact test for variables with small expected numbers. The multivariate logistic regression model was used to find out independent factors affecting unfavorable diagnosis. Receiver operating characteristic (ROC) curve was used to evaluate the performance of different tests and to differentiate between certain groups. The level of significance was taken at P value ≤ 0.05 as significant otherwise as non-significant.

1. Age and gender in study population

Table 1: Age and gender in the study population

Diabetes Mellitus: Diabetes mellitus was detected in 211 patients (53.1% of study population), and its presence was nearly equal in both groups (53.1% of group I patients versus 53.4% of group II patients).

5. Presence of microbleeds and leukoaraiosis

Table 4: Microbleeds and leukoaraiosis in the study population

Regarding the subtypes of stroke, it was noticed that large artery atherosclerosis stroke had been more common among group II patients compared to group I patients with a highly significant statistical difference (P ˂0.001), unlike the lacunar stroke which was more common in group I compared to group II (P ˂0.001). There was no significant difference between both groups regarding cardioembolic stroke (P=0.697) and stroke of undetermined etiology (P=0.167) (Table 5).

Table 5: Subtypes of stroke among the study population 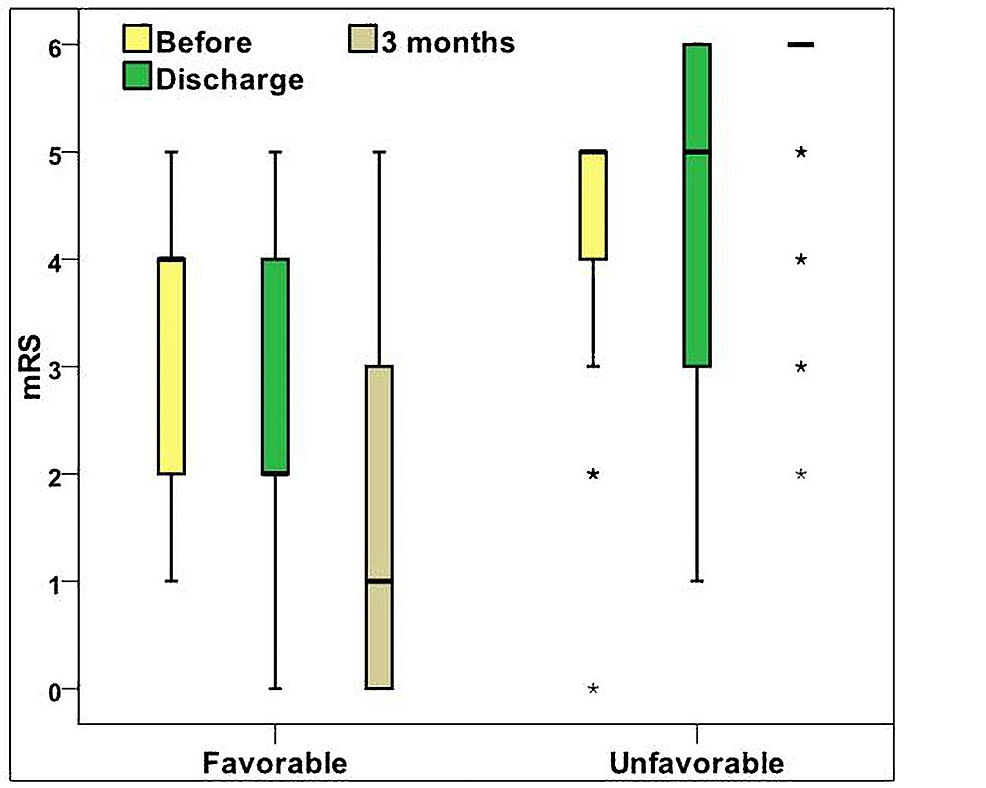 In agreement with the literature, old age was significantly correlated with unfavorable outcome (P <0.001). Advancing age has a major negative impact on stroke morbidity, mortality and long-term outcome [6, 15]. People older than 65 years of age had increased risk of mortality after two months from onset of stroke and admission to a skilled nursing facility [16-17].

The relation between the different cardiac disease and poor outcome was illustrated in many studies; congestive heart failure [14, 18], non-valvular atrial fibrillation [7, 18], coronary artery disease was associated with poor outcome and risk factors for dependency [18]. This raises the importance that patients with cardiac diseases shall receive an optimum care to prevent the occurrence of ischemic stroke and shall be carefully monitored at the hospital if the ischemic stroke occurs in order to decrease the mortality.

The patients who had a past history of ischemic stroke tended to have the unfavorable outcome (P=0.033). This was corroborated by many studies [4, 20] and raises the issue that patients with past history of stroke shall have careful management and monitoring in order to prevent recurrence and avoid worse prognosis.

A highly significant association between the severity of stroke, assessed by NIHSS score on admission and an unfavorable outcome was detected (P ˂0.001). Several studies have demonstrated that the NIHSS score was a good predictor of stroke outcome [4, 19] and that a remarkable neurologic impairment assessed by NIHSS score was associated with less favorable outcome [15]. In one study, the NIHSS score at one week was highly predictive of three months outcome; even more the addition of the infarct volume did not improve the accuracy of the predictive model [23].

High scores of mRS before admission (P ˂0.001) and mRS on discharge (P ˂0.001) had been more common among group II patients. Dependency before stroke onset is commonly associated with poor outcome [17]. The mRS score on discharge was retained as an important predictor of unfavorable outcome after regression analysis (P <0.001). One study reported that mRS score at seven to 10 days from onset of ischemic stroke was independently correlated to mRS score at three months [4]. Also, the mRS score on discharge was proven to have a high sensitivity and negative predictive value in predicting unfavorable outcomes.

In this study, an evident relationship between lacunar stroke and favorable outcome was noticed (P ˂0.001) and this was adopted in many studies where lacunar infarcts were associated with short-term good prognosis with decreased mortality and dependency [24]. This may be conflicting when related to the above-mentioned observation that leukoaraiosis had been related to unfavorable outcome as both lacunar stroke and leukoaraiosis are reflecting the presence of small vessel diseases, but it seems that lacunar stroke is the early stage of small vessel disease and leukoaraiosis is the late one. Lacunar infarcts are related to a worse long term prognosis with increased risk of death, stroke recurrence and dementia. For this reason, lacunar infarction should be regarded as potentially serious rather than a relatively benign disorder and, therefore, lacunar stroke patients require monitoring [25].

Many studies reported that patients with strokes of cardio-embolic or large artery etiology tend to have worse prognosis compared with other ischemic stroke subtypes [26-28], and this study reported a significant association between large artery atherosclerosis stroke and unfavorable outcome (P ˂0.001).

The limitations of our study were the retrospective design, limited sample size and the non-use of thromblytic therapy which is expensive and are not commonly available at our stroke centers.

The strengths of this study include the recruitment of consecutively admitted patients with acute ischemic stroke, thus allowing homogenous stroke population and avoiding selection bias. Also, the clinical criteria and the investigation modalities used in determination of the outcome can be easily performed and are indeed included in the routine stroke management protocol. This issue has been our major concern as we seek to provide the predictors of outcome that are cost-beneficial and ones that can be applied in the daily clinical practice at our community.

© Copyright 2017
Mahmoud Fouad et al. This is an open access article distributed under the terms of the Creative Commons Attribution License CC-BY 3.0., which permits unrestricted use, distribution, and reproduction in any medium, provided the original author and source are credited.

Table 1: Age and gender in the study population

Table 4: Microbleeds and leukoaraiosis in the study population

Table 5: Subtypes of stroke among the study population