Bilateral involvement of the breast with tuberculosis is extremely rare. It most commonly affects young lactating multiparous females, although rarely it may be reported in prepubescent males also. We present a case of a 27-year-old nulliparous female who presented with a history of multiple pus discharging sinuses around both areolae and was diagnosed as a case of bilateral tubercular mastitis. Tubercular mastitis being a paucibacillary disease, diagnosis is often difficult. Treatment consists of antitubercular therapy with or without surgery.​

Breast tuberculosis is a rare form of tuberculosis with an incidence of <0.1% in Western countries [1]. Even though the disease is more common in India as compared to the West, it is often misdiagnosed as carcinoma of the breast or breast abscess [2]. It most commonly affects young lactating multiparous females, although rarely it may be reported in prepubescent males also. Bilateral breast involvement is even more rare and very few cases have been reported till date [3]. We report a case of bilateral tubercular mastitis presenting in a young nulliparous female. We report this case due to its rarity and clinical significance.

The general physical examination and systemic examination were within normal limits. On local examination, nipple retraction with multiple scars, indurated granulomatous erythematous plaques, and discharging sinuses around the nipple-areola complex were found in both the breasts (Figures 1-2). 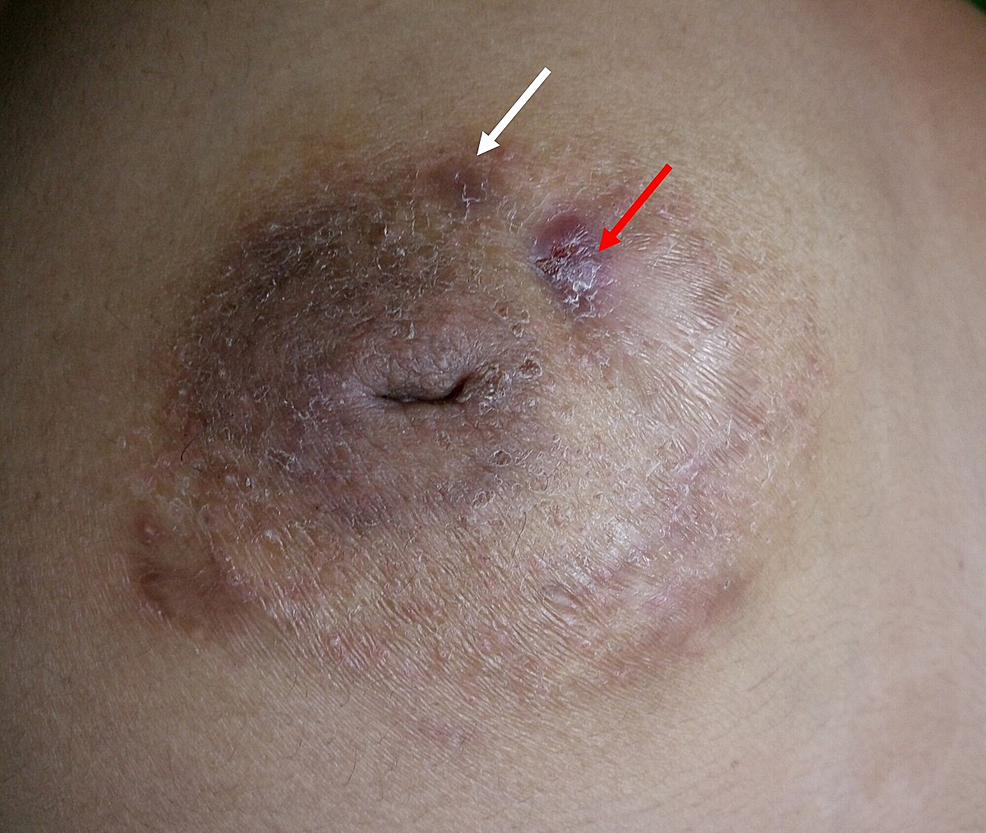 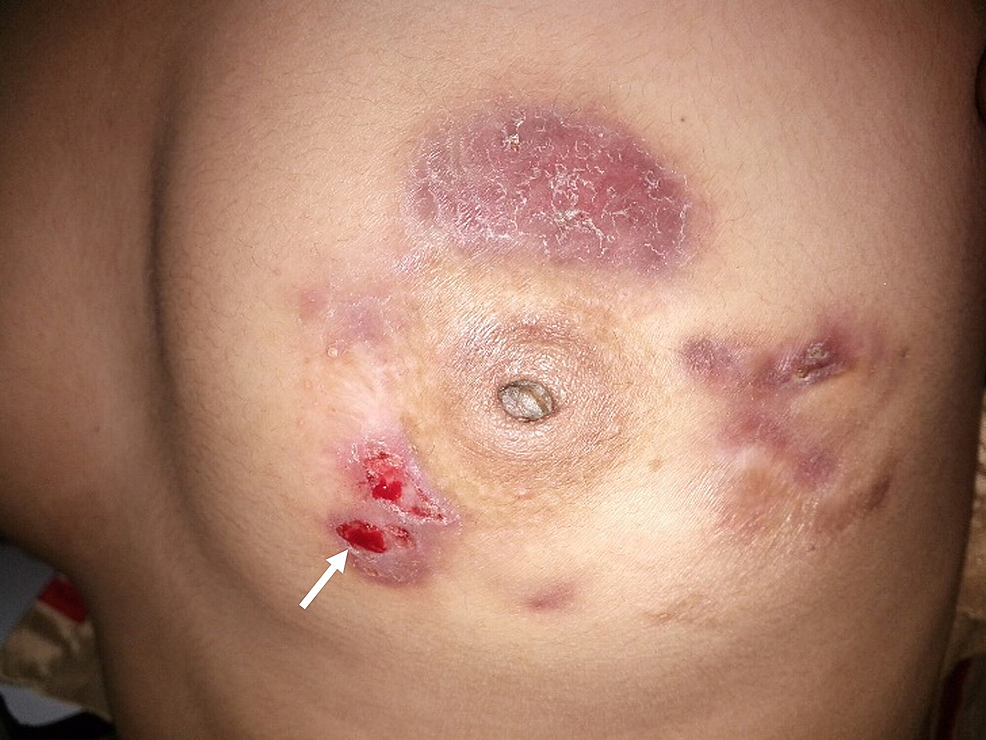 There was no palpable lump, and the bilateral axillae were normal. A diagnosis of tubercular mastitis was suspected. The differential diagnosis included carcinoma of the breast, breast abscess, and granulomatous mastitis with etiology other than tuberculosis.

All routine hematological and biochemical investigations were within normal limits, except the erythrocyte sedimentation rate, which was 25 mm in the first hour. A chest X-ray did not reveal any abnormality. Ziehl-Neelsen staining of the pus had no acid-fast bacilli and the culture was sterile. Real time polymerase chain reaction (PCR) for Mycobacterium tuberculosis and other mycobacteria was negative. An ultrasound of the breast showed bilateral sinus tract with duct ectasia with collection in the subcutaneous plane. Fine-needle aspiration cytology (FNAC) revealed multiple epitheloid cell granulomas with occasional giant cells suggestive of granulomatous mastitis. The skin biopsy had granuloma consisting of lymphocytes, plasma cells, epitheloid cells and occasional Langhans and foreign body giant cells suggestive of suppurative granulomatous dermatitis consistent with tuberculous mastitis (Figure 3). 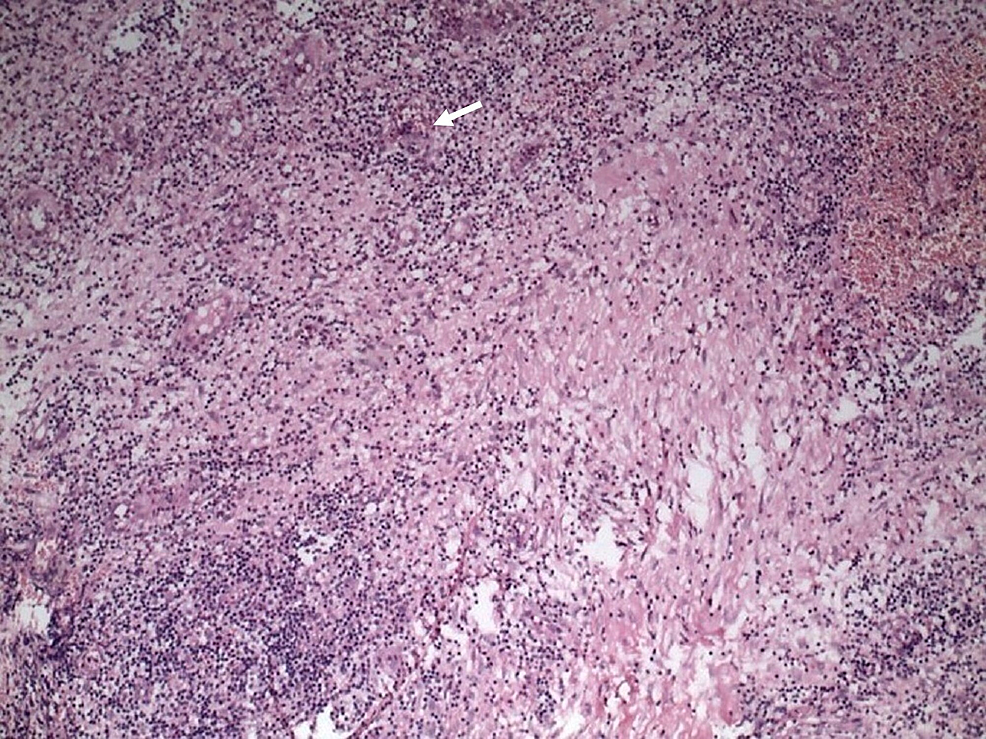 The patient was started on antitubercular therapy including isoniazid, rifampicin, pyrazinamide and ethambutol with doses adjusted according to the weight of the patient for two months. On the first follow-up after a month, the lesions became less indurated, erythema decreased, and the pus discharge reduced (Figure 4). 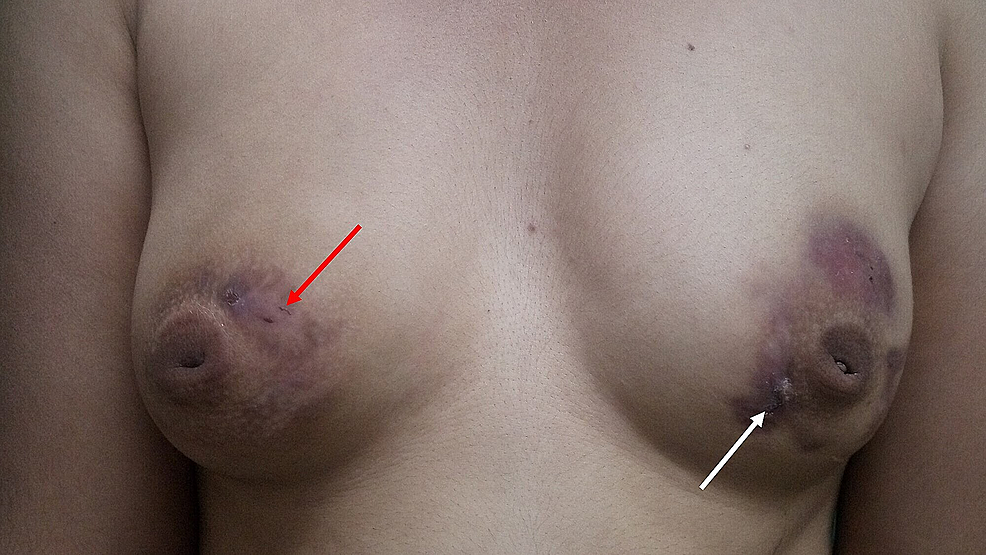 The patient had satisfactory response to antitubercular treatment and was called for follow-up and readjustment of drugs after a month.

Breast tuberculosis was first recorded by Sir Astley Cooper in 1829, who called it ‘scrofulous swelling of the bosom’. Breast tuberculosis is rare because of the high resistance offered by the breast tissue to the survival and multiplication of tubercle bacilli [4]. It commonly affects multiparous females usually in the age group of 21–40 years [5]. Our patient was a 27-year-old nulliparous female.

Diagnosis of breast tuberculosis is a challenge and the patient is usually subjected to numerous investigations before a diagnosis is made. Mantoux test is usually positive in endemic areas and stands obsolete. Mammogram is rarely used for diagnosis as it usually does not distinguish from carcinoma of the breast [6]. Ultrasonography is cheap, easily accessible, and helps in characterizing the lesion better without exposure to radiation [7]. Diagnosis is ideally by bacteriological confirmation from breast tissue by Ziehl-Neelsen stain or culture. But as the disease is usually paucibacillary, bacteria are isolated only in 25% of the cases [8].

Fine needle aspiration cytology (FNAC) is an important tool for diagnosis of breast tuberculosis. Approximately 73% of the cases can be diagnosed by demonstrating epitheloid cells with caseous necrosis on FNAC [8]. In our case, FNAC showed granulomas with epitheloid cells; however, there was no necrosis, which can be explained because only a small amount of tissue was harvested and examined in FNAC. Histopathological findings usually include epitheloid cell granulomas, but this picture can also be present in other diseases which include sarcoidosis, other fungal infections, and idiopathic granulomatous mastitis [7-8].

The treatment primarily comprises of antitubercular therapy with or without surgery. Residual lump following surgery may require surgical removal. A simple mastectomy can also be done.

Our patient had granulomas consisting of epitheloid cells in FNAC and biopsy and responded well to treatment by antitubercular therapy. Hence, a final diagnosis of tubercular mastitis was made after one month of treatment.

© Copyright 2017
Gupta et al. This is an open access article distributed under the terms of the Creative Commons Attribution License CC-BY 3.0., which permits unrestricted use, distribution, and reproduction in any medium, provided the original author and source are credited.