Disease of the cervical spine is widely prevalent, most commonly secondary to degenerative disc changes and spondylosis.

The goal of the paper was to identify a possible discrepancy regarding the length of stay (LOS) between the anterior and posterior approaches to elective cervical spine surgery and identify contributing factors.

Patients with anterior surgery performed experienced a length of stay that was 2.07 days shorter on average. Higher EBL, longer incisions, more intervertebral levels, and longer operating time were significantly associated with the posterior approach. Future studies should include multiple surgeons. The goal would be to create a model that could accurately predict the postoperative length of stay based on patient and operative factors.

The surgical treatment of degenerative disease of the cervical spine is one of the most commonly performed operations [1-2]. Surgical intervention is often required in cases where medical management has failed to alleviate symptoms [3]. Surgery can be accomplished through anterior, posterior, or combined approaches according to underlying pathology, each with variable postoperative hospital length of stay (LOS) [2]. Extended LOS is associated with an increased risk of complications, such as nosocomial infections [4], delirium [5], and venous thromboembolism [6]. A combination of preoperative and intraoperative patient-specific factors, such as age, opioid use, duration of surgery, and blood loss, have been correlated with prolonged hospital LOS. However, the question of how these factors can be influenced by the choice of surgical approach remains. Therefore, our study aims to connect these patient-specific factors to surgical approach and determine if hospital LOS can be influenced.

Demographic data collected were age, gender, and body mass index (BMI) recorded at the time of surgery. Preoperative variables that were recorded included a history of major comorbidities, such as hypertension (HTN), coronary artery disease (CAD), valvular disease, congestive heart failure (CHF), chronic obstructive pulmonary disease (COPD), and asthma. Perioperative data collected from anesthetic records included the American Society of Anesthesiologists (ASA) score, operative time, and estimated blood loss (EBL). Operative time was determined as the period from the start of the procedure to the final closure of the skin. Intraoperative EBL was recorded as blood loss occurring during surgery, estimated from sponges, drapes, and suction containers. The number of intervertebral levels and incision length were recorded from the operative report. The LOS was determined from the time of surgery to the time of discharge to home or rehabilitation and recorded as an integer. Any patients discharged on the day of surgery were represented with a “0” day LOS. Therefore, LOS was defined by the number of calendar days, rather than every new 24-hour period.

Statistical analyses were conducted using GraphPad Prism 5 (La Jolla, CA, USA) and the Statistical Package for Social Sciences (SPSS) (IBM SPSS Statistics, Armonk, NY). The tests were two-tailed and statistical significance was determined using an α level of 0.05. Multiple linear regression was used to test the association between length of stay and demographic and intraoperative factors. To determine if the anterior and posterior patient populations were similar, unpaired t-tests (for continuous variables), the Mann-Whitney test (for ASA scores), and two-tailed χ2 or Fisher’s exact tests (for categorical variables) were used.

Comparison of patient and intraoperative factors 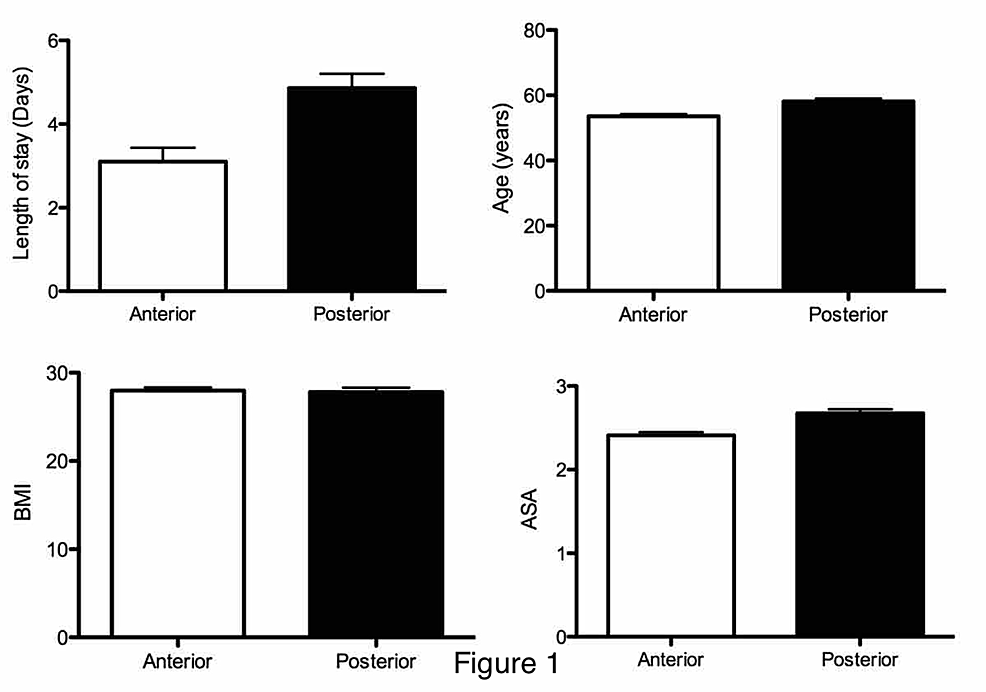 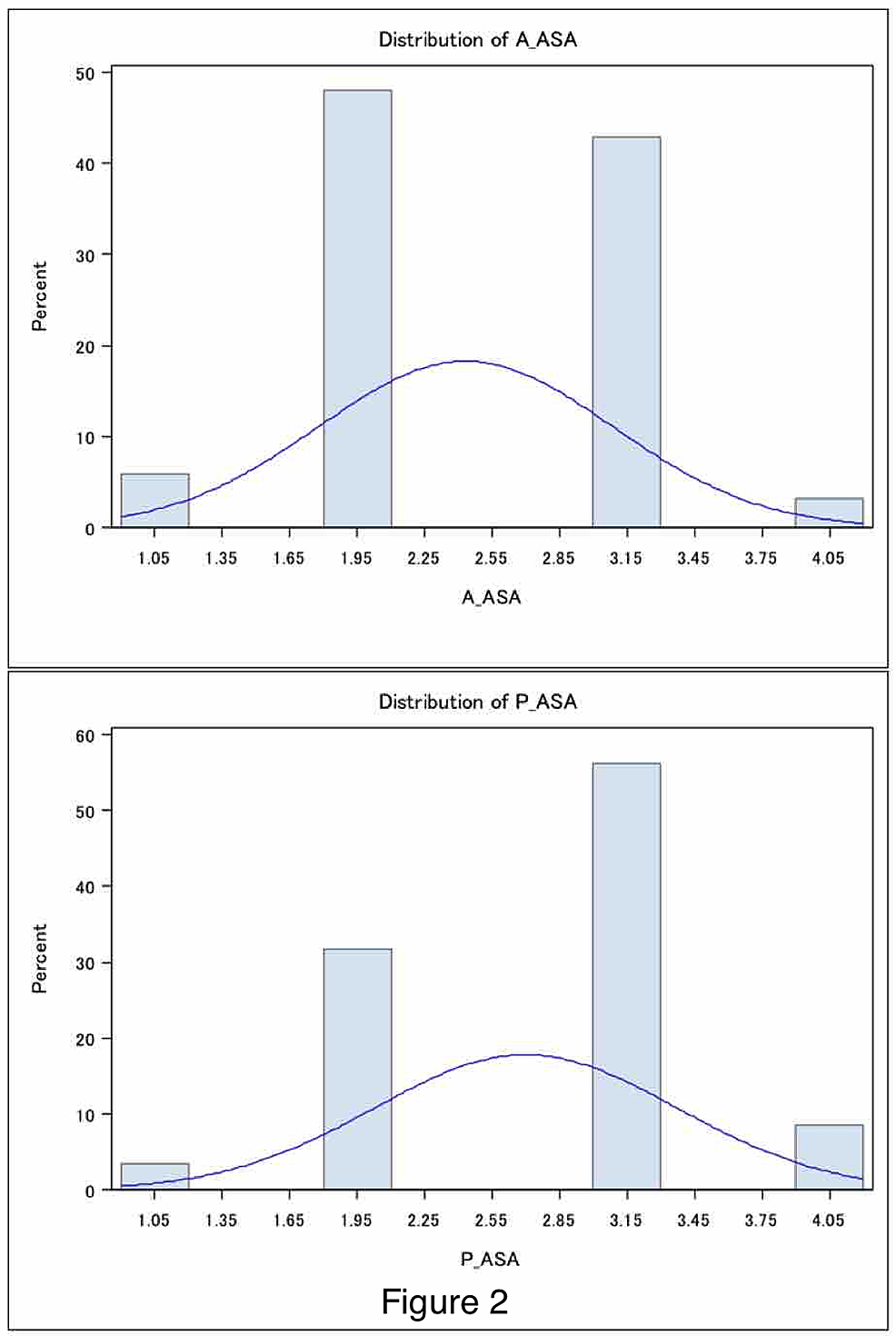 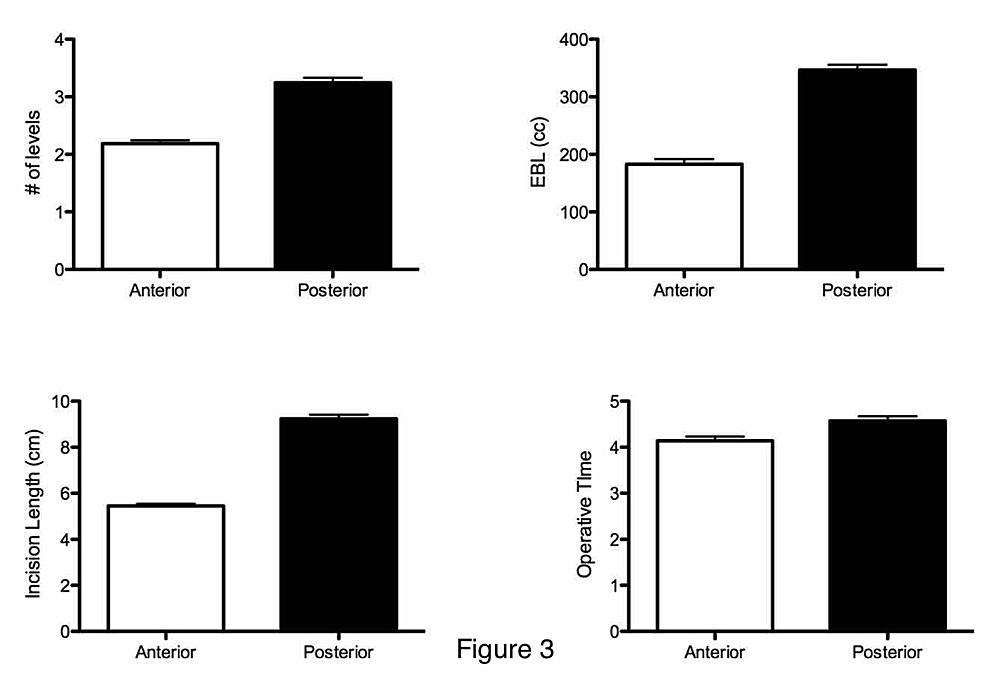 A review of patients’ medical histories and the subsequent Chi-squared test showed no difference in the number of patients with hypertension, coronary artery disease, valvular disease, congestive heart failure, COPD, and asthma between anterior and posterior patient populations.

Table 1: Associations Between Length of Stay and Pre- and Intraoperative Factors

In our study, patients who underwent anterior cervical spinal surgery stayed 2.07 days less on average than patients who underwent posterior surgeries. In general, this finding is consistent with the studies published to date [7-8]. Many patient specific factors could have contributed to this result, as there were multiple significant preoperative and intraoperative differences between the patient groups.

In our population, patients who underwent posterior surgery were older than those who underwent anterior surgery and had higher preoperative ASA scores. An increased ASA score was positively associated with increased LOS across all surgeries, and increased ASA score and age were positively associated with LOS for the anterior procedures. Increased age and ASA score have been identified in many studies as risk factors for increased LOS, postoperative complications, and morbidity and mortality [6, 10-14]. The results of this study substantiate those findings in the literature and suggest that the differences in age and ASA score could, in part, contribute to the increased LOS found in the posterior approach patients. Previous studies indicate that patients with a higher BMI generally have a longer LOS [10]. In our population of patients (with no significant difference in BMI between anterior and posterior groups), there was no association between BMI and LOS. This contrast with previous findings in the literature might result from differences in patient populations. Our study could also be inadequately powered to reveal such an association.

Patients in the posterior group had significantly more intervertebral levels operated upon, higher estimated blood loss, longer incisions, and longer procedures. These intraoperative factors were all positively associated with LOS across all patients and within the anterior group as well. These factors have all been associated with increased LOS in multiple studies in the spinal surgical literature [9, 18-19] and are, therefore, all possible contributors to the increased LOS found within this patient population.

The anterior and posterior groups contained no significant differences with regards to HTN, CAD, valvular disease, CHF, COPD, or asthma. Previous studies have identified these conditions as risk factors for increased LOS [13, 16-17]. Our results imply that either these factors independently increase LOS, even when these comorbidities are controlled for, or that the study was not adequately powered to reveal the differences in the comorbidities.

The primary limitations of this study are that it is retrospective and the data is from one surgeon at one institution. These make it difficult to be certain which pre- and intraoperative factors resulted in increased LOS in the posterior group of patients and limit the generalizability of the findings. Furthermore, separated analysis by indication for surgery (cervical spondylotic myelopathy, tumor, etc.) was not performed. There may be differences in LOS between these disease processes that were overlooked by this study.

Patients with anterior surgeries performed stayed 2.07 days less on average postoperatively than patients with posterior surgeries performed. Higher EBL, longer incisions, more intervertebral levels, and longer operating times were significantly associated with the posterior approach. No differences between comorbidities were found between the two cohorts, but a subgroup analysis of LOS in patients with these diseases within the population will need to be performed in a future study.

A long-term goal would be to build a model to predict LOS based on factors specific to the patient as well as the procedure being performed. This will require the inclusion of multiple surgeons and institutions, along with an analysis of procedure type and the disease processes requiring treatment. Other factors that have been associated with LOS should be explored in future studies as well, postoperative pain being an example. Such a model would be invaluable to practitioners and hospitals alike.

© Copyright 2017
Yuk et al. This is an open access article distributed under the terms of the Creative Commons Attribution License CC-BY 3.0., which permits unrestricted use, distribution, and reproduction in any medium, provided the original author and source are credited.

Table 1: Associations Between Length of Stay and Pre- and Intraoperative Factors