A 35-year-old male patient was admitted to our emergency department after sustaining a motorcycle accident. He was conscious and oriented and his vital signs were normal at initial admission. His major complaint was right shoulder pain and deformity. On physical examination, both epaulet and step-off signs were seen on his right shoulder. Active shoulder motion was absent and passive motions were extremely painful in every direction. The neurovascular examination was otherwise normal. A direct radiographic examination revealed simultaneous dislocation of the shoulder and acromioclavicular joints (Figure 1). The glenohumeral joint was reduced under sedation with the Kocher maneuver, and a control radiograph showed the proper reduction of the shoulder joint and complete type III AC separation (Figure 2). After obtaining an explanation of the benefits and risks of surgical treatment on type III AC dislocation, the patient chose conservative treatment. The patient wore a Velpeau bandage for two weeks; thereafter, active pendulum exercises were started and gradually increased to full range of shoulder movements. At fifth week, the patient returned to his previous job (accountant). At the final follow-up two years after the initial injury, the patient was free of pain with normal shoulder movements without a history of redislocation. However, he complained about the appearance of his right shoulder and prominence over the AC joint. 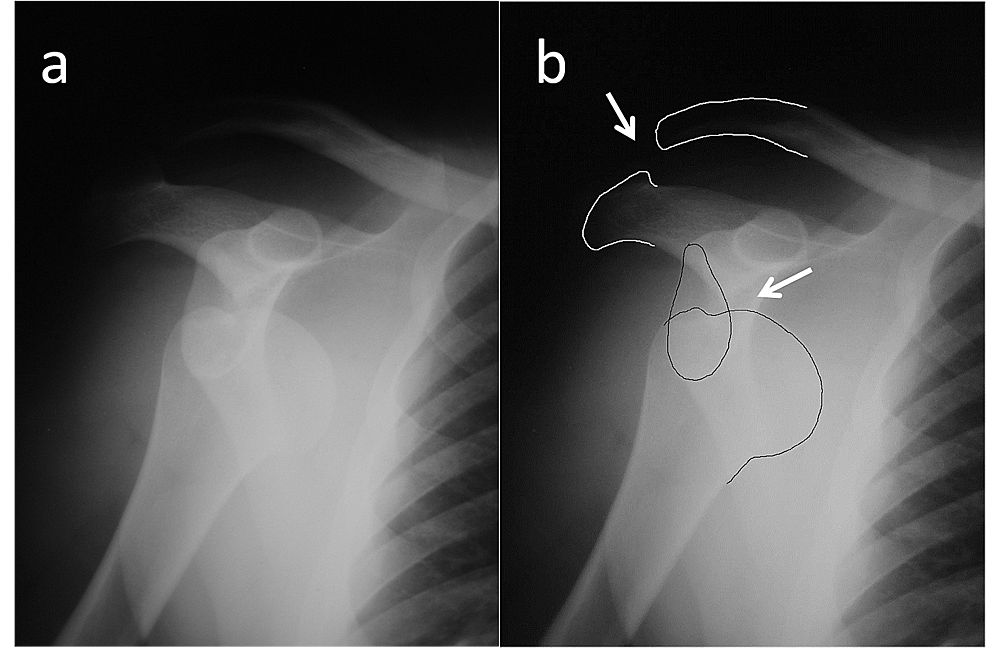 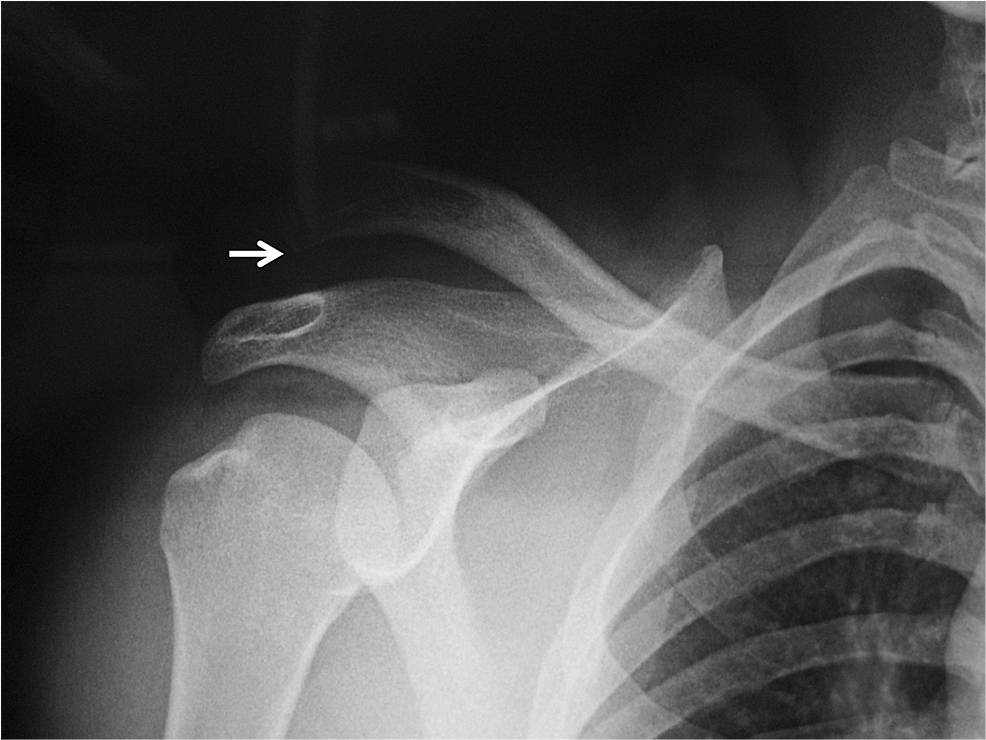 Anterior shoulder dislocations account for over 95% of all shoulder dislocations. Rouleau, et al. reported a review of the literature with 477 patients (547 shoulders) with 90 of them being women (19%). The average age of these patients was 41.1 years (range 17–75 years). In 70 cases, the dislocations were bilateral. A majority of dislocations (65%) had associated injuries: fracture was the most common followed by reverse Hill-Sachs deformities and cuff tears [4]. The arm is usually in an abducted and externally rotated position. There is absence of the normal contour of the deltoid and the acromion is prominent posteriorly and laterally. The humeral head itself may well be palpable anteriorly. It is easy to identify anterior shoulder dislocations with plain anteroposterior (AP) radiographs. In any case of suspicion, scapula Y and other shoulder AP radiographies should be taken. The axillary view greatly assists in making the diagnosis. Computerized tomography (CT) may have a role in depicting comorbid pathologies. Magnetic resonance imaging (MRI) can detect anterior capsulolabral complex and rotator cuff injuries. Treatment of an anterior shoulder dislocation depends on the dislocated time period, reducibility, and comorbid pathologies. The management after reduction traditionally involves immobilisation in internal rotation. The typical length of immobilisation is three to six weeks, but there is a trend toward shorter periods or no immobilisation at all.

Traumatic acromioclavicular joint separations are common injuries among the active population [5]. The mechanism of most acromioclavicular separations is trauma, caused either by a direct blow to the top of the shoulder with the arm in the adducted position or by a fall on an outstretched hand. Rockwood classified acromioclavicular separations into six types [6]. In type I injuries there is partial and in type II complete disruption of the acromioclavicular ligaments. In both, the radiographs will appear to be normal. In type III injuries, the vertical translation at the joint is up to the width of the clavicle while in type IV the clavicle is displaced posteriorly into the trapezius. In type V injuries, the degree of separation is greater because of the concomitant disruption of the deltotrapezius fascia attached to the end of the clavicle. In the type VI injury the clavicle is displaced inferiorly and comes to lie below the coracoid process underneath the conjoint tendon.

Conservative treatment is almost universally applicable to type I and type II injuries. The most common form of non-operative treatment involves simple analgesia, topical ice therapy and rest in a sling to give relief from symptoms. The treatment of isolated type III acromioclavicular separations is controversial. While some authors advise surgery, succesful results were also reported by conservative means. The initial treatment of acute type III acromioclavicular separations is usually conservative, although some authors do advocate surgery for acute injuries in high performance throwing athletes. However, the current view remains in favour of conservative management of acute type III injuries. Operation is used to treat medically-fit patients with type IV and type V injuries. Gstettner, et al. conducted a retrospective study in which 24 patients who were treated surgically with a hook plate and 17 patients who were treated conservatively were examined with a mean follow-up of 34 months. In this study, better results were achieved by surgical treatment with the hook plate than by conservative treatment [7]. Smith, et al. reported their meta-analysis, which is about operative versus non-operative management following type III acromioclavicular dislocation. There was no statistically significant difference between the interventions in respect to strength, pain, throwing ability, loss of anatomical reduction, ossification of the coracoclavicular ligament, or acromioclavicular joint osteoarthritis. Non-operative management was associated with significantly poorer cosmetic outcome but less sick leave compared to operative management. Also, they found significantly higher risk of infection following surgical management compared to non-operative treatment [8].

Anterior shoulder dislocation and accompanying type III acromioclavicular separation has not been reported in the literature before. It is obvious that orthopaedic surgeons should have a high clinical suspicion in daily practice. We believe that both pathologies can be treated conservatively.

© Copyright 2017
Kılıçaslan et al. This is an open access article distributed under the terms of the Creative Commons Attribution License CC-BY 3.0., which permits unrestricted use, distribution, and reproduction in any medium, provided the original author and source are credited.