A cross-sectional study was conducted on hypothyroid patients attending the endocrine clinics at Alhada Military Hospital and Prince Mansour Military Hospital, Taif, Saudi Arabia between the period of December 2020 and May 2021. Patients with more than 18 years of hypothyroidism were included and those with other thyroid diseases were excluded as well as those with other comorbidities and psychiatric disorders and those who were living alone. Data were collected using an online pre-structured questionnaire.

In this study, 2.2% of sampled hypothyroid patients had high (2.2%) or moderately high degrees of loneliness feelings (16%). Duration of hypothyroidism was a significant predictor for high loneliness score.

The relationship between thyroid hormones and TSH is influenced by many variables, including smoking, age, and thyroid peroxidase antibody status [6]. In adults, the major symptoms of hypothyroidism include cold intolerance, dry skin, and changes in voice pattern, constipation, lethargy, fatigue, and mood disorders [7,8].

Loneliness is defined as emotional distress that is characterized by feelings of sadness due to the lack or absence of predictable meaningful social relationships [9]. One study performed in the United States showed that the prevalence of loneliness was 16.9%. However, the risk of loneliness increases with non-married status, poor self-esteem, lower educational level, and chronic diseases [10]. In addition, for sociodemographic characteristics, authors have reported that loneliness is more common in women than men [11]. Loneliness has a negative impact or influence on multiple chronic diseases [12].

Social-contextual feelings, such as loneliness, affect the thyroid functioning and adaptive immune system. One study showed more fluctuation in TH secretion among people who scored low in terms of social support. This might also indicate that people who receive social support have relatively stable TH secretion [14]. In a study performed in 1999, they studied the difference between healthy and chronically ill people and found greater feelings of loneliness in ill people (in terms of their social network) [15]. Adequate social support has an association with better health and lowers loneliness among people [16].

Moreover, we cannot ignore the health impacts of loneliness among the elderly [17]. Despite the improved health consequences, the prevalence rates have persisted over several decades [18]. Only a few reviewers have focused on them despite being the highest group who experience loneliness [19]. Others have acknowledged the significant impact of loneliness on elderly people because of their normal aging process and the presence of comorbidity diseases [20]. The main effect is on their chronic diseases, which do not improve, and it becomes the main source of morbidity and mortality among the elderly [18].

This was a cross-sectional study conducted at the endocrine clinics at Alhada Military Hospital and Prince Mansour Military Hospital, Taif, Saudi Arabia between the period of December 2020 and May 2021. The research was approved by the Research Ethics Committee of Armed Forces Hospitals, Taif region (2020-515).

Patients who were more than 18 years of age with hypothyroidism (TSH less than 0.3500mIU/L) were included, and we excluded those with other thyroid diseases, other comorbidities, psychiatric disorders, and who are living alone.

Data were collected through phone interviews using the valid online revised University of California, Los Angeles (R-UCLA) Questionnaire (Appendix Table 4). The questionnaire included the following items: personal data, such as marital status, age, gender, level of education, and socioeconomic status, and clinical data, such as duration of hypothyroidism and medication dose. Lab data were collected from medical records, including the levels of TSH, CBC, vitamin B12, and vitamin D.

Data were analyzed using the SPSS program version 26 (IBM Corp., Armonk, NY). Qualitative data were expressed as numbers and percentages, and the Chi-squared test (χ2) was used to test the relationship between variables. Quantitative data were presented as mean and standard deviation (mean ± SD) and the one-way ANOVA test and Kruskal Wallis tests were used according to the data normality. Correlation analysis using the Spearman’s and Pearson correlation tests was done according to the data normality. A p-value of less than 0.05 was considered statistically significant.

Table 1: Distribution of the participants according to their characters, smoking, BMI, levothyroxine use, and physical activity

Table 3 and Appendix Table 4 demonstrated that participants who had a high degree of loneliness had a significantly higher mean hypothyroidism duration (p ≤ 0.05). On the other hand, a non-significant relationship was found between the degree of loneliness and participants’ gender, marital status, educational level, SES, smoking, BMI, levothyroxine use, physical activity, or clinical data other than hypothyroidism duration (p ≥ 0.05).

Figure 2 shows that a significant positive correlation was found between the R-UCLA scores and hypothyroidism duration/years (r = 0.12, p-value = 0.035). 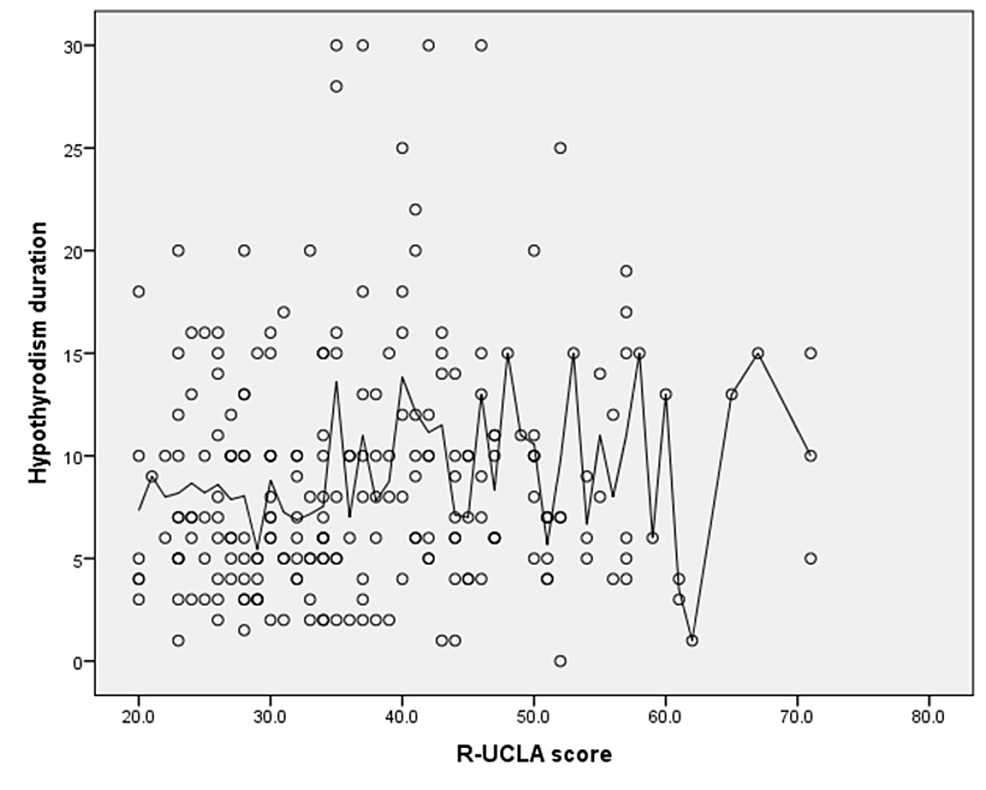 The current study aimed to assess the relationship between loneliness and hypothyroidism in patients with hypothyroidism and to determine predictors of loneliness level. Depression with a poor mood is one of the reported effects of clinical hypothyroidism, and that intimately reflects the mood-related symptoms of people with a depressive disorder, such as major depression, minor depression, or loneliness feelings [21]. Physicians mostly check for other related clinical features of hypothyroidism to distinguish hypothyroidism-related mood disturbance from other common sources of a persistently depressed mood [22]. There is clearly a link between thyroid problems and psycho-social disorders, according to an extensive study review published in 2012 [23].

The current study revealed that 2.2% and 16% of the studied hypothyroid patients had moderately high and high degrees of loneliness feelings, respectively. This high level of loneliness feelings had a non-significant relationship with patients’ age, genders, education, SES, smoking, or practicing physical activity.

The only significant factor associated with a high level of loneliness feeling was hypothyroidism duration rather than thyroid profile (TSH, T3, and T4). This can be explained by the fact that hypothyroidism requires time to manifest in mood changes or psychological upsets and is difficult to examine with a laboratory profile. Correlation analysis showed a borderline significant relation between T3 level and the feeling of loneliness score. Hypothyroidism is one of the metabolic disorders that is associated with psychological disturbances among cases, including depression. Depressed patients lose all luxury desires and have a high tendency toward isolation, which results in loneliness preference [24,25].

Demartini et al., [24] found that 63.4% of hypothyroid patients had a diagnosis of depressive episodes with anxiety. Demartini et al., [25] reported that 63.5% of hypothyroid patients had psychological disorders. The most frequent symptoms were anxiety and somatization, cognitive impairment disturbances, psychomotor retardation, and sleep disorders, which all may end in social isolation and loneliness feelings among patients. Guimarães et al., [26] estimated that 45.7% of hypothyroid patients presented with depressive symptoms. Females with a TSH > 10 mUI/ml had a threefold likelihood of presenting depressive symptoms compared to those with normal levels of TSH. Among those with clinical hypothyroidism, the adjusted OR was 8.7. In a wider context, many studies have focused on the relationship between loneliness with social isolation and chronic diseases in general. There has been no consensus regarding the nature and significance of this relation, as some studies have confirmed this relation but other studies have failed to find any such association [27].

Our study has some limitations. First, in our opinion, an important limitation was that the use of a self-administered questionnaire could have a recall bias. Second, the majority of our study sample was female so our study did not include undiagnosed mood disorders, menstrual cycle changes, and presence/absence of social or familial support.

In conclusion, the study revealed that 2.2% and 16% of the sampled hypothyroid patients had moderately high and high degrees of loneliness feelings, respectively. The only significant predictor for high loneliness score was hypothyroidism duration rather than thyroid profile or other patient-related factors.

b. High secondary school or less

a. Yes (if yes for how long, which type)

8- Do you have any chronic diseases?

9- Duration of hypothyroidism: in years

The authors thank the participants of this work for their cooperation.

© Copyright 2021
Alshehri et al. This is an open access article distributed under the terms of the Creative Commons Attribution License CC-BY 4.0., which permits unrestricted use, distribution, and reproduction in any medium, provided the original author and source are credited.

Table 1: Distribution of the participants according to their characters, smoking, BMI, levothyroxine use, and physical activity