This case study aims to get a better understanding of the challenges involving adequate coverage of internal mammary lymph nodes (IMLN) in left breast irradiation. With advances in radiotherapy technologies such as helical tomotherapy (HT), adequate and safe PMRT can be offered to most patients after autologous breast reconstruction with excellent outcomes. Informed consent statement was obtained for this study.

The patient underwent an oncological resection of the left breast with modified radical mastectomy and axillary lymph node dissection of levels I and II. An elliptical incision was made centered on the SMQ. The overlying skin, as well as the areola and the nipple which was subject to a prior biopsy, were resected. The borders of dissection extended superiorly to the clavicle, inferiorly to the rectus abdominis, medially to the sternum and laterally to the latissimus dorsi (LD). Immediate autologous breast reconstruction, which consisted of mobilization of the LD and insertion of prosthesis under the flap was performed subsequently by the plastic surgeon. Postoperatively, the patient developed a hematoma at the LD donor site that required antibiotics and drainage. One month after IBR, the patient underwent a second operation with the purpose of lysing thoracic adherences and breast nipple reconstruction.

She received PMRT with axillary, supraclavicular and IMLN irradiation. Treatment was delivered with HT to a conventional dose of 50 Gy/25 fx, 5 fx/week, with daily 2 mm chest wall bolus applied to the skin. A free-breathing (FB) planning computed tomography (CT) scan was acquired in the same supine treatment position with both arms abducted above the head and the left breast immobilized with a thermoplastic shell. A radio-opaque wire was placed on the reconstructed breast for clinical target volume (CTV) delineation and planning target volume (PTV) was defined by adding a three-dimensional (3D) uniform expansion of 7 mm around the CTV. The organ at risks (OARs) and target volume contours was performed as per Radiation Therapy Oncology Group (RTOG) 1304 guidelines as shown in Figure 1. The treatment plan was optimized such that the prescribed dose covered at least 95% of the PTV. By the end of radiotherapy treatment, the patient suffered from grade two radiation dermatitis and grade one esophagitis respectively treated with topical application of silver sulfadiazine cream and mouth gargle of a solution containing an aluminum hydroxide and magnesium hydroxide based antacid, lidocaine 2% and diphenhydramine. 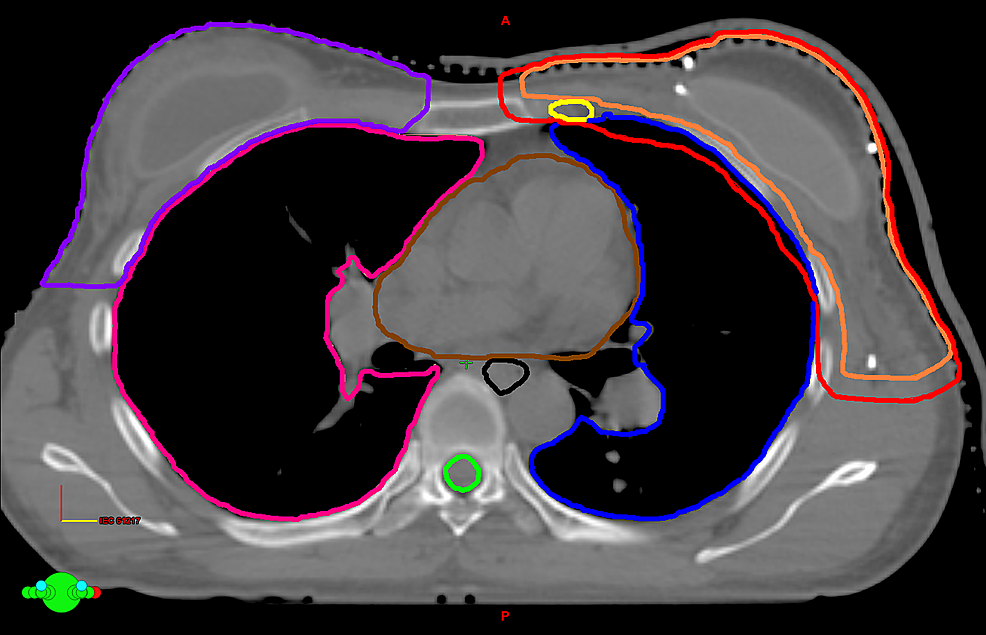 Figure 1: Target volumes and organ at risks (OARs) contoured on the axial slice of the planning computed tomography.

Post-therapy follow-up was performed by members of the treatment team and included physical examination every six months, the mammogram every year and serial assessments of cardiac function with radionuclide ventriculography. At three-year follow-up, the patient is disease free and no cardiac toxicity was observed. Immediate breast reconstruction with autologous tissue has provided excellent cosmetic outcome as shown in Figure 2.

Recent randomized trials addressing PMRT in locally advanced breast cancer show clear survival benefits in patients treated with appropriate surgical techniques (complete axillary lymph node dissection) and modern adjuvant systemic therapies. In the Early Breast Cancer Trialists’ Collaborative Group (EBCTCG) meta-analysis, 78 randomized trials, including the Danish Breast Cancer Cooperative Group (DBCG) 82b and 82c as well as the Columbia PMRT trials, were examined for a total of 42,000 females treated [1]. After mastectomy with axillary clearance in node positive patients, PMRT reduced 15-year breast cancer mortality and all-cause mortality from 60.1% to 54.7% and 72.3% to 68.8% respectively (all significant). Although comprehensive PMRT with irradiation of regional lymph nodes is well-established for this subgroup of female, the criteria for patient selection who require IMLN inclusion in the treatment fields remain controversial. Historically, no significant survival benefit has emerged from numerous randomized trials addressing the role of IMLN surgical resection [2-3]. However, recent literature shows a slight but significant improvement in recurrence rate and breast cancer mortality in node positive patients receiving radiotherapy after mastectomy and axillary dissection [4]. In our practice, patients with ≥ 4 positive axillary nodes or those with clinical or pathological disease involvement usually receive ipsilateral IMLN irradiation.

Left-sided whole breast or chest wall radiation therapy carries a long-term risk of cardiac toxicity. The probability of major coronary events (myocardial infarction, coronary revascularization, and death from ischemic heart disease) increases linearly with the mean dose to the heart and left anterior descending artery (LAD), with no minimum threshold for risk [5]. Although reduction of the irradiated cardiac volume can be accomplished through personalized field shaping using multileaf collimator, tangential intensity-modulated radiotherapy (IMRT) often presents suboptimal heart doses in left-sided breast cancer patients. In our institution, cardiac avoidance is rigorously performed through a radiotherapy treatment allocation algorithm. Alternative techniques to tangential radiotherapy such as deep inspiration breath-holding (DIBH) and HT are preferred in all left-sided breast cancer patients. During DIBH, lung inflation creates a separation between the heart and chest wall, moving the cardiac silhouette outside of the tangential fields with subsequent mean heart dose reduction. Helical tomotherapy enables coverage of complex volumes with the excellent conformity of the dose distribution throughout a rotating gantry with treatment delivery from 360 degrees around the patient.

In the present case, tangential radiotherapy would have required partially wide tangents for proper IMLN inclusion in the treatment field further exposing the heart to irradiation. Consequently, HT treatment was preferred. Figure 3 shows the dose distribution of partially widened tangential radiotherapy plan versus HT plan, retrospectively optimized to obtain an equivalent 95% coverage of the PTV. In the tangential radiotherapy plan, depth of heart penetration and in-field heart volumes were respectively 1.5 cm and 24 ccs. Compared to tangential results, HT resulted in a reduction of mean heart dose (3.5 vs 3.7 Gy) with more significant effect on the mean dose to left anterior descending (LAD) (22.5 vs 32.7 Gy). As an increase in stenosis of LAD has been reported in left-sided irradiated breast cancer, reduction of doses to coronary arteries is clinically relevant [6]. Helical tomotherapy (HT) delivers a larger dose spread with increased low-dose areas, especially for organs not normally irradiated in tangential radiotherapies, such as the esophagus, the contralateral lung, and breast. To minimize any risk of late secondary malignancy, strategies for OARs preservation are used during treatment planning such as rigorous selection of optimization parameters, field blocking at specific angles and usage of virtual optimization structures for dose constraint. Therefore, both adequate target coverage and optimal organ sparing can be obtained with HT in most patients with strict observance of RTOG dosimetric criteria. Although HT seems to be well tolerated according to early follow-up result and dose-volume histogram analysis, more prospective long-term data are needed to provide hard evidence of the benefit of this technique in terms of reduced toxicity and clinical outcomes. In the presented case, only acute skin toxicity was observed, a common side effect with breast HT with retrospective series reporting a majority of patients with low grade radiodermatitis [7].

Post mastectomy radiotherapy increases the likelihood of capsular contraction, fibrosis, volume loss and delayed wound healing in all types of breast reconstruction. Fewer rates of these complications and increased post mastectomy patients’ satisfaction may be observed in females with immediate autologous reconstruction as compared to implant-based reconstruction [8-9]. Still, preferred surgical approach (myocutaenous flap, expender, implant reconstruction, etc.) may vary among cancer centers and timing of reconstruction in the setting of adjuvant radiation therapy remains a controversial issue. On one hand, IBR offers safe oncological outcomes and may confer a psychological benefit and improvement in self-image [10]. On the other hand, concerns with regards to radiation delivery and loss in reconstruction cosmesis warranted many centers to favour delayed or delayed-immediate reconstruction with placement of a tissue expander at the time of mastectomy when PMRT is administered. Reconstruction selection must be assessed in a multidisciplinary discussion to adopt the surgical approach that best suits the patient’s concerns, risk factors (age, body habitus, obesity, comorbidities, etc.) and treatment team expertise. In the presented case, IBR consisting of a mixed autologous latissimus dorsi (LD) flap reconstruction with the addition of prosthesis was performed to obtain adequate breast volume. The patient completed PMRT eight months post surgery after adjuvant chemotherapy was completed. Despite risk factors of IBR complications (prior breast surgery, lymph node invasion and usage of skin bolus), HT treatment was well tolerated as the patient only developed transient grade 2 dermatitis. The patient and her oncology team were pleased with the cosmetic outcome.

The authors thank Noemie Lahaie, Andree-Anne Bernard and Marjolaine Lord for their valuable contributions. This work will be presented in part at the American Association of Physicists in Medicine 59th Annual Meeting in Denver, Colorado and the 2017 Canadian Surgery Forum in Victoria, British-Colombia

© Copyright 2017
Mathieu et al. This is an open access article distributed under the terms of the Creative Commons Attribution License CC-BY 3.0., which permits unrestricted use, distribution, and reproduction in any medium, provided the original author and source are credited.

Figure 1: Target volumes and organ at risks (OARs) contoured on the axial slice of the planning computed tomography.