The transverse process is a bony protrusion that extends from the lateral edge of the neural arch and functions as a site of attachment of deep back muscles and ligaments. The cervical transverse processes are morphologically different from the rest of the spine due to the fact that they contain a foramen (foramen transversarium), which houses the vertebral artery [1]. Anomalies of the transverse process are rare occurrences, and there is a scarce amount of literature on this topic.

An extensive osteological collection from various universities identified a single specimen (sex unknown) of a thoracic vertebra, which was T10. The specimen was from an adult and had no unusual findings except that on the left side, the transverse process was duplicated (Figure 1). There were no findings of old fractures or other disease. Although no ribs were found with this isolated specimen, both transverse processes had articular facets present indicating that in life, ribs had articulated at each process. The left and right laminae of this vertebra were thought to be slightly elongated in the coronal plane from normal and the inferior articular facet was related to the lower transverse process and the superior articular facet was related to the base of the superior transverse process. The right side of this vertebra was thought to be normal although the “normal” transverse process was broken off. The vertebral canal and body were both found to be normal. Additionally, the left-sided intervertebral foramen of this level was not compromised although the two transverse processes were closer to each other than normal. 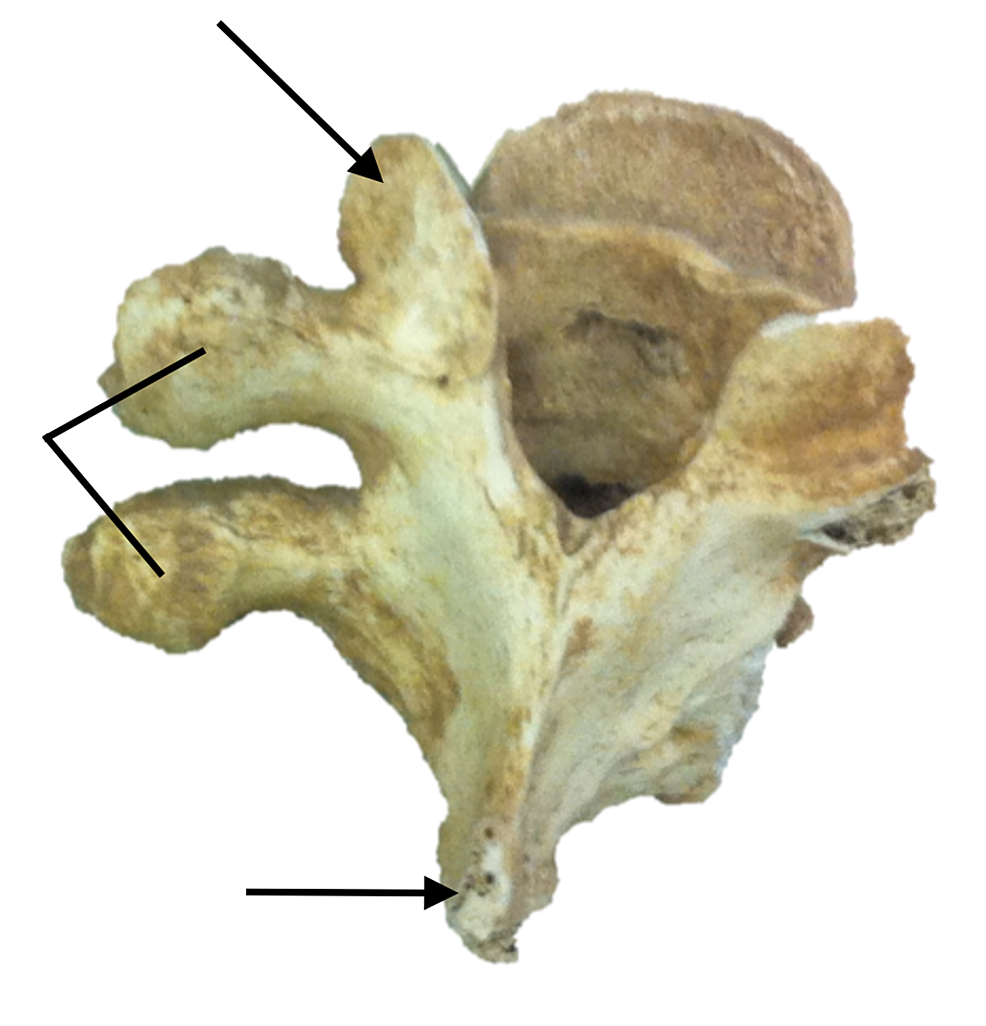 Mivart states that the development of the vertebral column is similar in humans as it is in other vertebrates, and the reason for variation of ribs and transverse processes in vertebrates is due to the arresting of the notochords at different stages. An example can be found in Lessons in Elementary Anatomy by St. George Jackson Mivart, which shows vertebrae having four ribs on each side originating from a doubled transverse process. The vertebrae came from a Polypterus, which is a genus of primitive freshwater fish found only in Africa and are characterized by numerous dorsal finlets [8].

Another etiology of what might have caused this duplicated transverse process is Klippel-Feil syndrome (KFS). This is a rare congenital skeletal malformation characterized by the triad of short neck, limitation of head and neck movements and low posterior hairline [9]. There have been three types of Klippel-Feil syndrome described with type three involving the thoracic and lumbar spine anomalies [10]. The etiology of KFS is still unknown, but there have been some associations with chromosomal translocations and teratogenic causes that could lead to abnormal formation of the vertebral column [9-10].

Although the anomaly is apparently very rare, if encountered in the future by surgeons or radiologists, having a reference to it in medical literature would be important. Additional reports are now necessary to better understand the true etiology and prevalence of such an osteological anomaly.

© Copyright 2017
Voin et al. This is an open access article distributed under the terms of the Creative Commons Attribution License CC-BY 3.0., which permits unrestricted use, distribution, and reproduction in any medium, provided the original author and source are credited.