Systemic amyloidosis is a rare multisystem disease caused by incorrectly folded proteins that deposit pathologically in different tissues and organs of the human body. It has a very wide spectrum of clinical presentations according to the affected organ(s), and its diagnosis is commonly delayed. Cardiac involvement is the leading cause of morbidity and mortality and carries a poor prognosis, especially in primary light chain amyloidosis. Therefore any delay in the diagnosis can result in devastating outcomes for the patient. We report the case of a 65-year-old man who presented with dizziness and lightheadedness. He was found to have orthostatic hypotension and further investigations revealed the diagnosis of amyloid cardiomyopathy complicating a plasma cell dyscrasia. What is worth noting, in this case, is that the patient had cardiac amyloidosis presenting primarily as autonomic dysfunction and orthostatic hypotension, without any cardiac-specific symptoms such as heart failure or angina. This is a very unusual presentation of advanced-stage cardiac amyloidosis. This article highlights the variety of clinical presentations of cardiac amyloidosis, and focuses on the recent progress such as novel diagnostic and surveillance approaches using imaging, biomarkers, and new histological typing techniques. Current and future promising treatment options are also discussed, including methods directly targeting the amyloid deposits.

Amyloid cardiomyopathy (AC) is an uncommon medical condition resulting from a systemic disease known as amyloidosis. This disease is still widely underdiagnosed as there are several types of amyloid, each with its unique features, leading to a vast spectrum of clinical presentations. The purpose of this article is to familiarize readers with the various clinical features of amyloidosis, to address the approach toward this disease, and to focus mainly on the cardiovascular presentation, treatment options, and prognosis. Here, we describe the case of amyloid cardiomyopathy in an adult male who presented with autonomic dysfunction; he was eventually diagnosed with primary amyloidosis and myocardial involvement secondary to a plasma cell dyscrasia.

A 65-year-old man was admitted to our institution for evaluation of dizziness and generalized weakness. His symptoms started two months prior with a progressive increase in dizziness described as unsteadiness and lightheadedness; it was more prominent when standing up, and improved with sitting still. He was evaluated back then, and was told that he had vertigo which was treated with meclizine. His symptoms did not get better after initiation of the treatment; on the contrary, they gradually got worse. Moreover, the patient has suffered several falls that he attributed to his dizziness. Also, he lost around forty pounds unintentionally over the last year despite preserving a good appetite. At his presentation, the patient was in no distress, complaining only of dizziness especially when trying to get up or walk. On physical examination, he had a blood pressure of 97/60 mmHg and a heart rate of 76 beats per minute while lying supine. When asked to stand up, his blood pressure dropped to 76/45 mmHg and his heart rate rose to 81 beats per minute. He had no other significant findings, in particular, neurological and cardiovascular examinations were normal. Laboratory tests came back unremarkable except for mild normocytic anemia with a hemoglobin level of 11.8 g/dL and proteinuria of 30 mg/dL. The electrocardiogram (ECG) showed micro-voltage with first-degree heart block and pseudo-infarction pattern on the precordial leads along with infero-lateral non-specific ST-T wave changes (Figure 1). 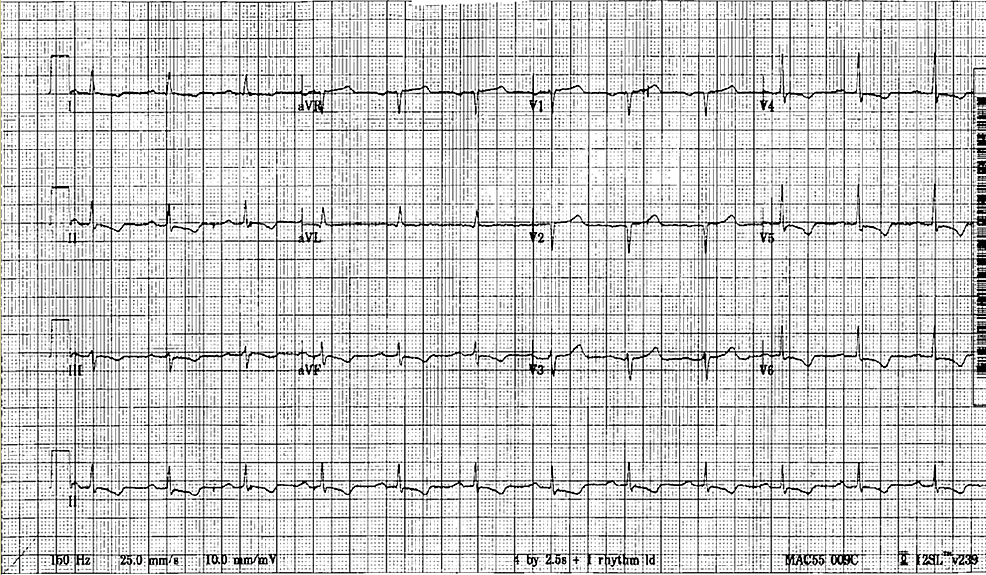 A chest x-ray, computed tomography (CT) scan of the head, and a duplex scan of the carotids failed to explain the patient’s symptoms. Transthoracic echocardiography (TTE) revealed a left ventricular hypertrophy with an inter-ventricular septal thickness of 16 mm along with a reduced systolic function and an ejection fraction around 45% (Figure 2). The myocardium had a speckled/granular appearance with increased echogenicity, and there was mild homogenous thickening of the mitral and tricuspid valves. 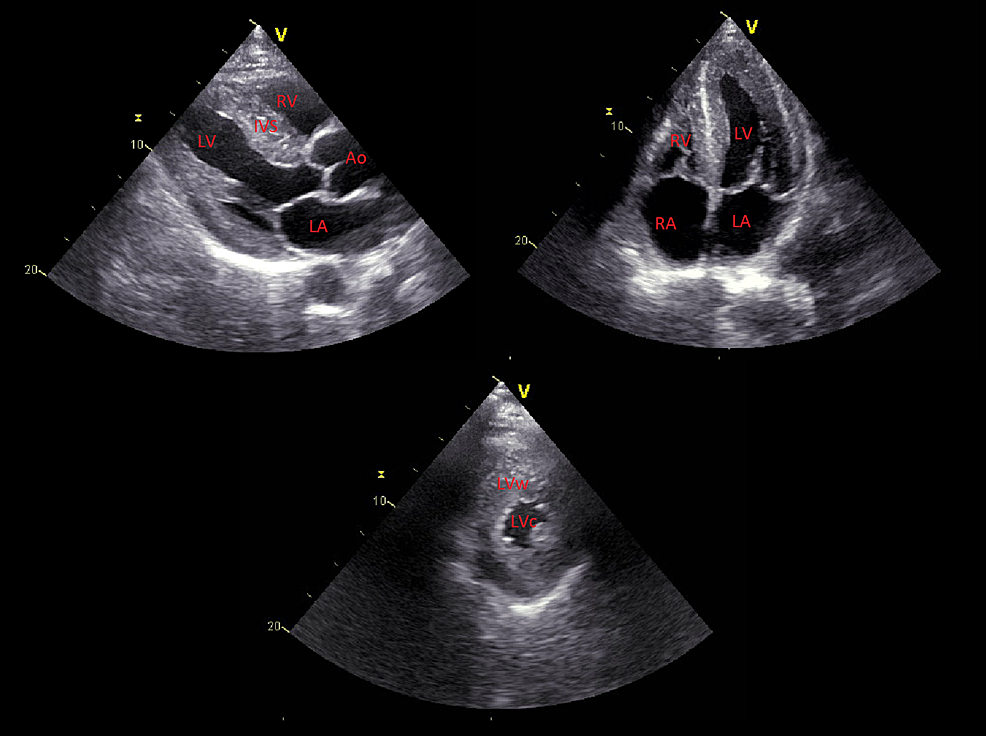 These findings suggested the diagnosis of an infiltrative cardiomyopathy such as amyloidosis, hemochromatosis, or even sarcoidosis. Cardiovascular magnetic resonance (CMR) imaging scan was refused by the patient. Serum ferritin, transferrin saturation, and angiotensin converting enzyme levels were normal. The diagnosis of hemochromatosis and sarcoidosis became very unlikely, especially in the absence of any pulmonary or extra-pulmonary findings. The other infiltrative cardiomyopathies such as Fabry disease, Friedreich ataxia, Wegener disease, and many others, mainly occur in the younger population and were unlikely in this case. A fat pad biopsy was then performed which showed positive Congo red stain (Figure 3). 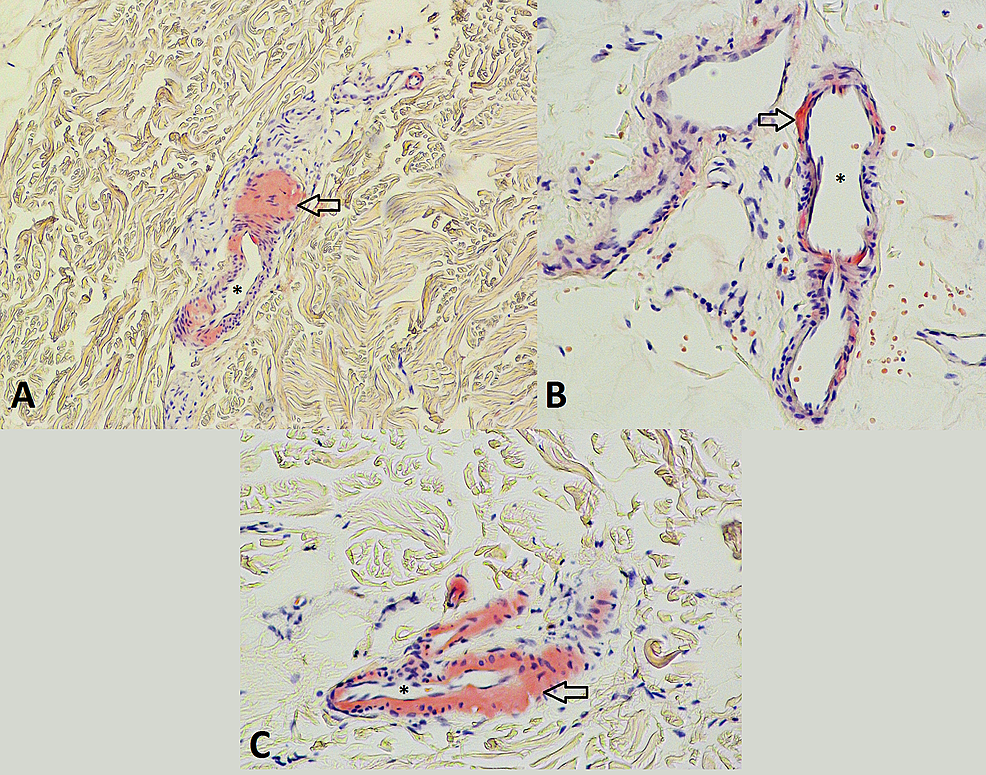 The serum and urine electrophoresis revealed an immunoglobulin G Lambda monoclonal spike along with high levels of free Lambda light chain (92 mg/L) and a decreased free Kappa to Lambda ratio of 0.1 (normal range is 0.26-1.65). At this point, multiple myeloma was highly suspected, but the bone survey failed to elicit any lytic lesions. Finally, a bone marrow biopsy was scheduled but the patient refused the procedure and left the hospital against medical advice. In conclusion, the patient was found to have light-chain (AL) amyloidosis secondary to an undiagnosed plasma cell dyscrasia, presenting as amyloid cardiomyopathy and autonomic dysfunction.

Amyloidosis is a general term that refers to the extracellular deposition of fibrils composed of low molecular weight subunits of a variety of proteins, many of which circulate as constituents of plasma. These soluble proteins undergo conformational changes and become insoluble by adopting a predominantly anti-parallel beta-pleated sheet configuration, leading to their deposition in various tissues [1]. There are several major forms of amyloidosis, such as AL amyloidosis, amyloid A (AA) amyloidosis, dialysis-related amyloidosis, heritable amyloidosis, and senile amyloidosis, among others. The clinical manifestations of amyloidosis are largely determined by (i) the type of precursor protein, (ii) the amount of amyloid deposition and most importantly, (iii) the tissue/organ involved [1]. This article focuses on amyloidosis that affects the heart muscle causing AC and discusses new diagnostic methods and current treatment options.

The patient described in this report had biopsy-proven AC with typical electro- and echocardiographic findings, with peripheral neuropathy and autonomic dysfunction, secondary to a certain plasma cell dyscrasia with high concentrations of immunoglobulin G Lambda chains. Nonetheless, a definite diagnosis of the plasma cell dyscrasia could not be done because the patient refused further tests and procedures and was lost to follow-up.

AC remains a challenging condition to diagnose and treat. Red flags that should raise suspicion include features of a multisystem disease, concentric LV hypertrophy on echocardiography with low voltage ECG, and a characteristic delayed enhancement pattern on CMR. Tissue biopsy remains the gold standard for diagnosis. Supportive treatment is limited to diuretic therapy when possible, and despite the developments in chemotherapy, the prognosis of patients with advanced cardiac involvement remains poor. Thereby, early recognition and diagnosis are essential for a better prognosis. In the end, a variety of novel specific therapies are currently on the horizon, with the ability to inhibit a new amyloid formation and enhance clearance of the existing fibrils.

© Copyright 2017
Tabet et al. This is an open access article distributed under the terms of the Creative Commons Attribution License CC-BY 3.0., which permits unrestricted use, distribution, and reproduction in any medium, provided the original author and source are credited.