Cesarean section (CS) incidence is increasing globally through recent years, reaching 25% of total deliveries in some countries [1]. This rise in the incidence of CS increases the events of CS-related complications [2]. CS complications include infection, hemorrhage and thromboembolism as short-term complications in addition to the long-term complications and symptoms including dysmenorrhea, dysuria, abnormal uterine bleeding, and infertility [2,3]. Some CS complications − such as placenta accreta, uterine rupture or dehiscence, and CS scar pregnancy − may be manifested during a subsequent pregnancy due to a defective uterine scar [3]. The prevalence of uterine scar defect in women with previous CS is unexpectedly high, ranging from 56% to 84% when examined by transvaginal ultrasonography with contrast [4].

In pregnant women with a previous cesarean delivery, the risk of uterine rupture during a subsequent trial of labor has to be assessed. Its assessment is done using ultrasonographic measurement of the lower uterine segment and the residual myometrial thickness (RMT) [5]. Defective RMT was linked to a higher risk of adverse outcomes, including postmenstrual spotting, uterine dehiscence or rupture, placental adherence, failure of labor trial, and more complications of CS scar pregnancy [6]. It has been hypothesized that uterine incision closure technique may be associated with the development of the uterine niche and subsequent CS-related adverse outcomes [4].

The surgical method of uterine closure after CS is suggested to affect the RMT, uterine scar defect, and the healing of the uterine scar. However, clear evidence of the best method for uterine closure is not established [7], and no evidence-based guideline for the closure technique is present [8]. Previous studies reported that double-layer (DL) closure has thicker residual myometrium and a lower incidence of large defects than single-layer (SL) closure. However, a clear conclusion about other clinical outcomes is still lacking [9].

This systematic review and meta-analysis aim to compare the ultrasonographic findings and complication rate of single-layer (SL) versus double-layer (DL) uterine closure techniques after CS procedure.

We searched PubMed, Scopus, Web of Science, and Cochrane library databases for published randomized control trials (RCTs) from inception till June 2021. We used the following keywords: "surgical technique," "endometrium," "suture technique," "single-layer," "double-layer," "cesarean section," and "postcesarean." We applied no restrictions regarding age, publication date, the indication of cesarean section, or the number of previous deliveries.

Retrieved records were imported to Endnote software, and duplicates were removed. The remaining records underwent title and abstract screening then full-text screening according to our eligibility criteria. Three reviewers performed the screening process independently, and any disagreement was solved by discussion. Eligible articles were included in the meta-analysis.

According to the Cochrane Collaboration tool for risk of bias assessment in randomized studies, we evaluated the quality of the included studies [12]. The tool included the judgment of the selection, performance, detection, attrition, reporting, and other bias domains. Each domain was judged as low, high, or unclear risk of bias. At least two independent reviewers judged each domain and conflicts were solved by discussion.

Data analysis was conducted using review manager (RevMan) software version 5.4. Data of continuous outcomes were reported as mean difference (MD) and 95% confidence interval (CI) using the Inverse-Variance method, and dichotomous data were reported as relative risk (RR) and 95% CI using the Mantel-Haenszel method. We assessed heterogeneity using chi-square and I-square tests, and heterogeneity was considered significant at chi-square P-value < 0.1 and I2 > 50%. We used the random-effects model for analysis. Whenever pooled data are heterogeneous, we tried to solve the heterogeneity by sensitivity analysis using the leave-one-out test and subgroup analysis. We performed a subgroup analysis, when applicable, according to the used suturing technique, whether locked or unlocked sutures, and whether the decidua is included or excluded from suturing.

Searching electronic databases yielded a total of 3926 articles. After removing duplicates, we had 3018 unique articles that underwent title and abstract screening. Of these articles, 2907 were excluded, and 111 full-texts were retrieved and screened according to our eligibility criteria. Finally, 18 studies were considered eligible for inclusion in the meta-analysis [3,8,13-28]. Figure 1 summarizes the flow of the study selection process and data collection. 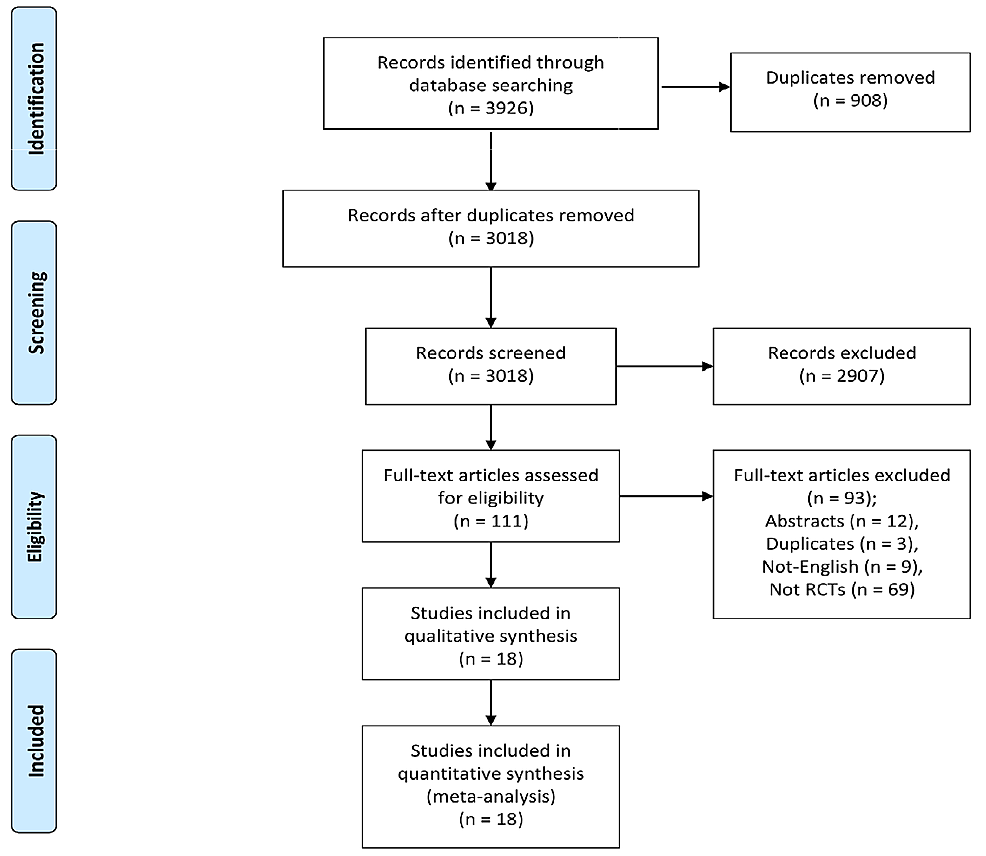 Characteristics of the Included Studies

Included studies were performed in various countries. The sample size varied considerably across studies, ranging from 30 to 7411. The follow-up period varied from six weeks in some studies to 6-24 months in other studies. The mean age of included patient groups ranged from 24 to 32 years, while mean gestational age ranged from 37.8 to 40 weeks. Table 1 and Table 2 show the summary of included studies and the baseline characters of included patients, respectively.

Table 1: Summary of the included studies. 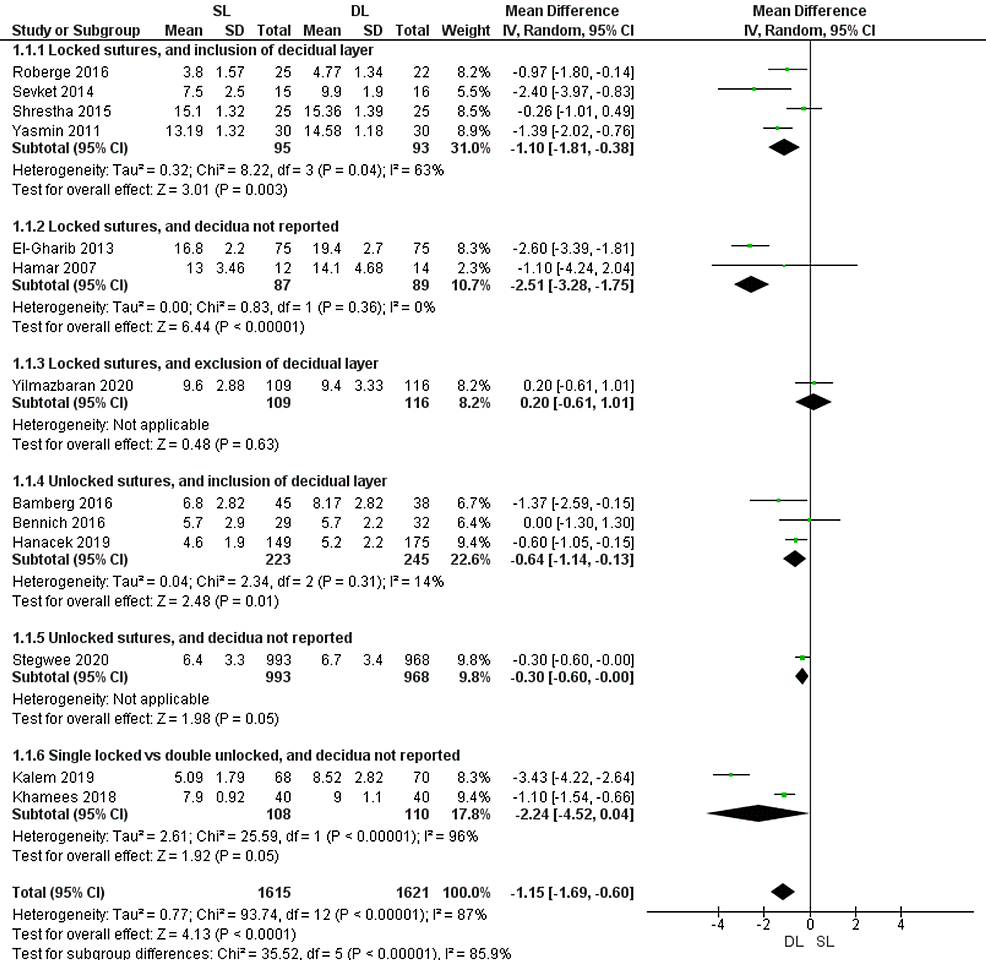 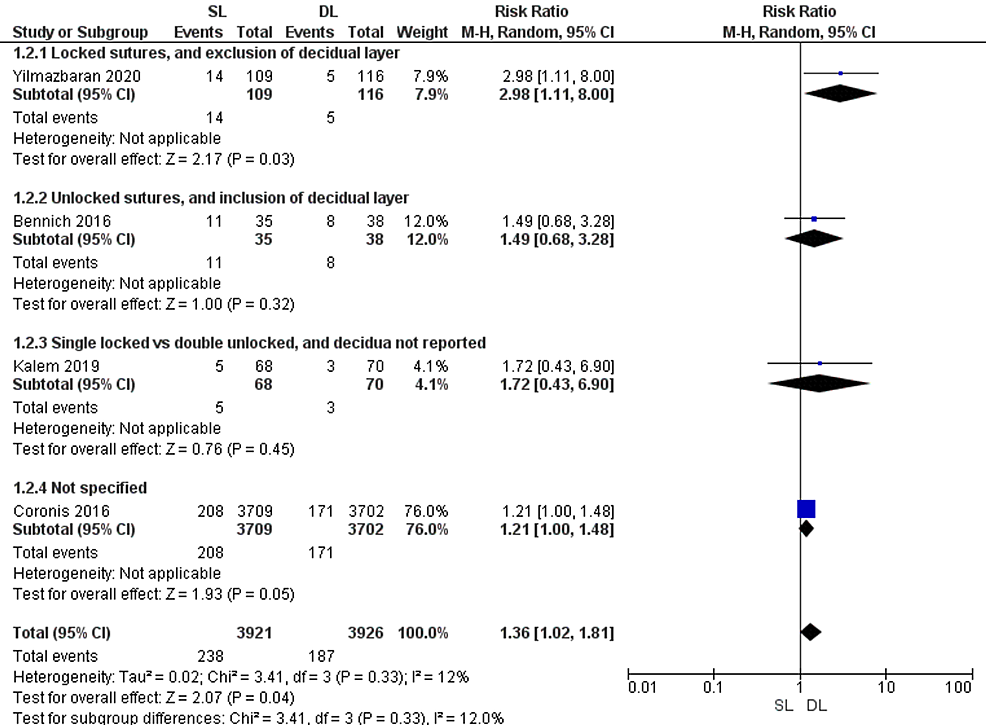 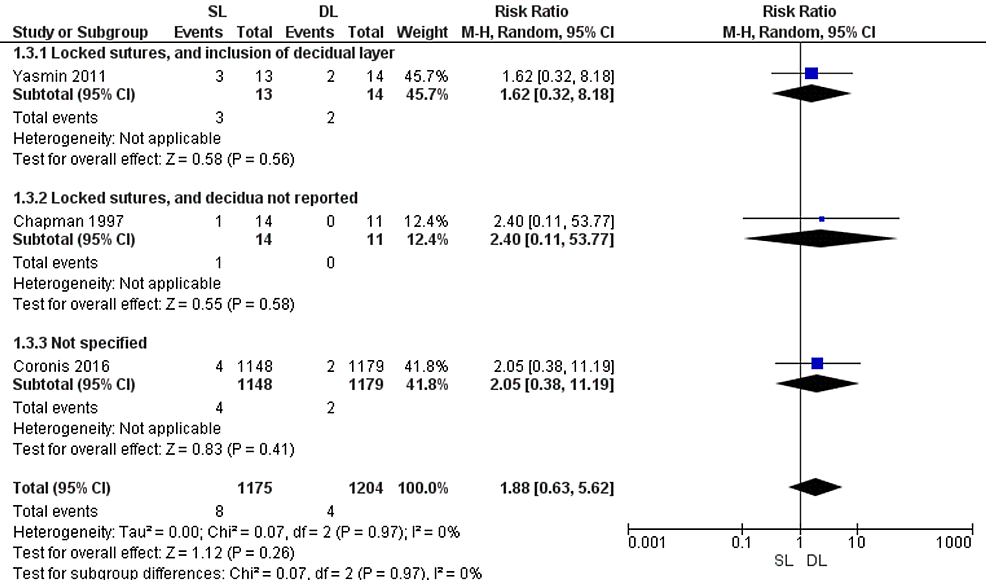 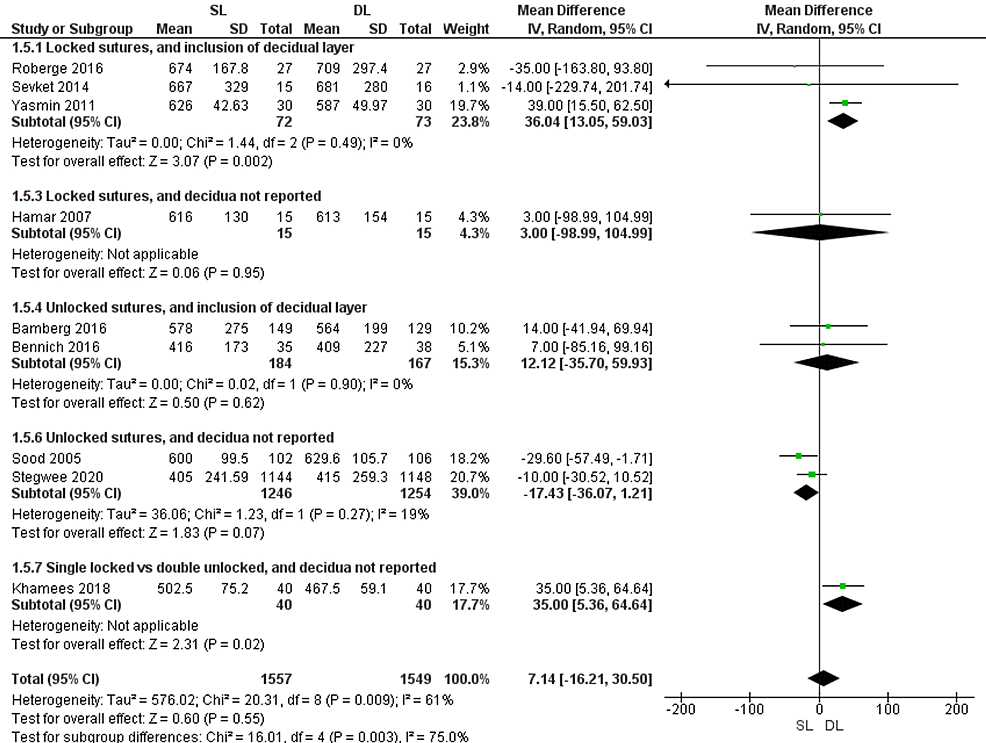 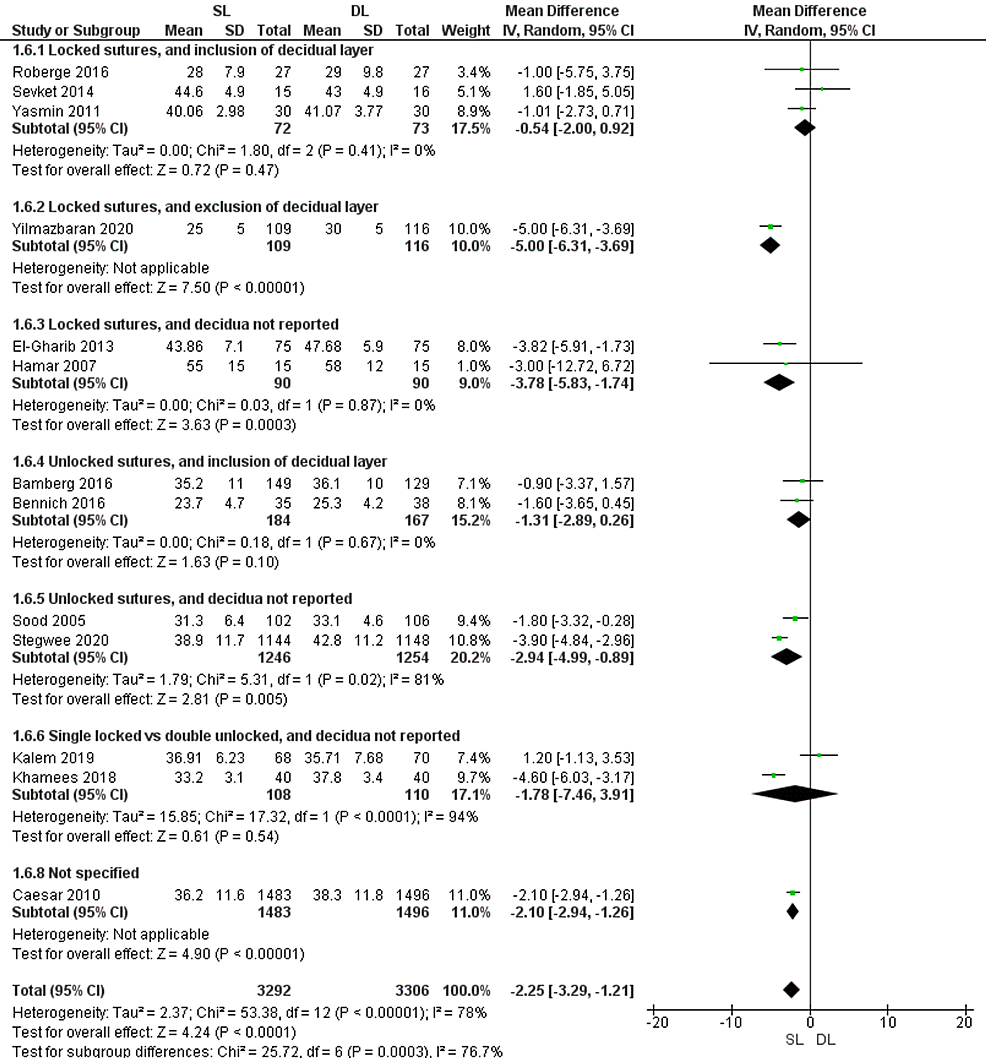 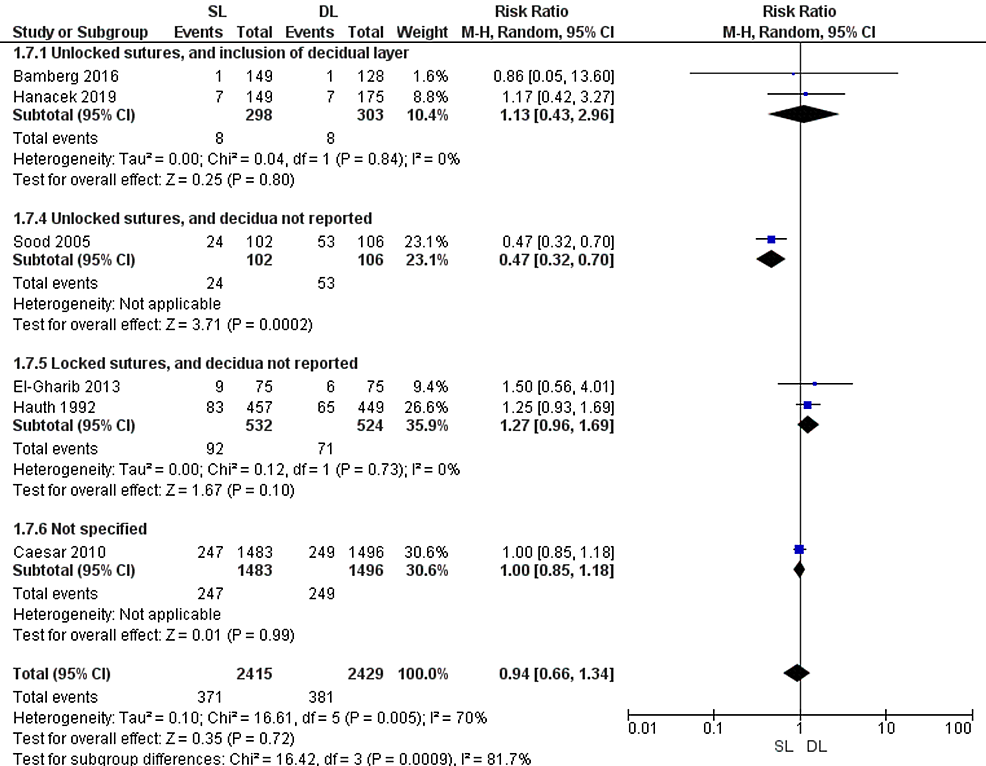 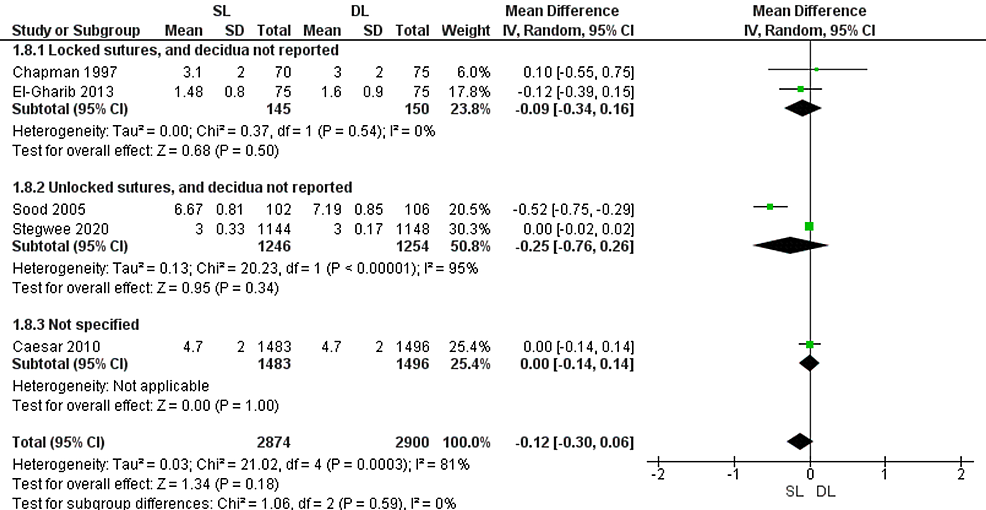 The analysis of 19 RCTs' results revealed that DL uterine closure is better than SL uterine closure after cesarean delivery in RMT and dysmenorrhea. Both techniques showed comparable results about the amount of blood loss, healing ratio, hospital stay duration, maternal infection risk, readmission rate, and the risk of uterine dehiscence or rupture during a subsequent delivery. In contrast, SL closure showed better results regarding operative time.

As reported by previous studies [7,9], SL uterine closure was associated with thinner RMT than the DL closure technique. This finding was more evident in our study when using locked sutures in both SL and DL closure methods. Also, a previous meta-analysis reported superiority of DL closure with unlocked sutures over SL closure with locked sutures regarding RMT [9]. We performed a similar comparison in a subgroup analysis, but the pooled estimate did not reach statistical significance. The thicker RMT with DL uterine exposure is expected due to the separate closure of the myometrial and serosal layers in the DL technique.

Previous studies support our finding that SL closure is associated with more risk of dysmenorrhea than DL closure [3, 9, 15]. However, a recent trial reported similar rates with both techniques [8]. In our study, the superiority of the DL closure method was attributed to the recent trial by Yilmaz Baran 2020 [28], while the other pooled trials showed insignificant results [3,15,22]. Thus, the present study solves this debate in favor of the DL closure technique by pooling the results of all previously published RCTs. The higher risk of dysmenorrhea with DL closure has no obvious cause.

Regarding the risk of uterine dehiscence or rupture during the following pregnancy, our results coincide with the literature that both SL and DL closure techniques have comparable risks [7,9,29].

Our study addressed other short- and long-term outcomes. These included the amount of blood loss, the duration of hospital stay post-procedure, the readmission rate, and the maternal infection rate. These outcomes' pooled results showed no significant difference between SL and DL closure. Similar findings were reported by a previous meta-analysis [9].

Stegwee 2018 meta-analysis reported that the healing ratio is better with DL closure than SL closure [9]. Our results showed no significant difference between both groups. This disagreement mostly arises from data from observational studies included in the previous meta-analysis [9] but not in the present study.

As the results of our study found, SL closure is known to be easier and faster than DL closure [9,28]. Most obstetricians prefer SL to DL closure in order to decrease operative time with no significant increase in the risk of complications [3,13]. Also, a recent randomized multi-center study stated that SL closure is associated with lower niche prevalence, less need for treatment of gynecological complications, and less harmful effect on sexual activity and general health [8].

Although the DL closure showed better sonographic outcomes, as revealed by the present study and previous studies [9], these outcomes seem to be clinically insignificant [8,28]. Thus, SL closure is still the most popular method for uterine closure after CS delivery.

It is important to name an optimal standard method for uterine closure after CS. This is because cesarean delivery is a popular procedure, exceeding one million cases in the United States per year [30]. Also, this would help the decision-making for pregnant women who had a previous cesarean delivery, whether they will undergo a trial of labor or an elective repeat cesarean delivery [30].

In this systematic review and meta-analysis, we included RCTs only to provide high-quality class-one evidence and followed the widely accepted PRISMA guidelines during the conduction of this study. We included all published RCTs with no publication date restriction. In addition, we performed subgroup analyses according to variations in the surgical techniques (locked or unlocked sutures, and inclusion or exclusion of the decidua) to solve the heterogeneity between studies. Limitations in this study include the heterogeneity detected in many outcomes and could not be solved in some cases. In addition, some long-term outcomes were reported by a small number of studies, which limits the generalizability of the results. Future studies with large sample size and longer follow-up would provide more conclusive results.

DL uterine closure technique was associated with more RMT compared with SL closure technique. Also, patients who had DL uterine closure showed lower incidence of dysmenorrhea. On the other hand, SL closure was associated with significantly shorter operation time. Both techniques showed comparable healing ratio, readmission rate, and hospital stay. Also, the amount of blood loss, the risk of maternal infection, and the risk of uterine dehiscence or rupture during a subsequent delivery were similar with both techniques.

© Copyright 2021
Qayum et al. This is an open access article distributed under the terms of the Creative Commons Attribution License CC-BY 4.0., which permits unrestricted use, distribution, and reproduction in any medium, provided the original author and source are credited.

Table 1: Summary of the included studies.