AFD is a benign odontogenic tumor that histomorphologically simulates an ameloblastic fibroma (AF) but can form dysplastic dentin. It predominantly presents as an intraosseous tumor in the gnathic skeleton, more common in the mandible than the maxilla. Though peripheral lesions are reported, they form miniscule numbers. It accounts for a small percentage of odontogenic tumors and only around 64 cases have been reported so far since its first description by Straith in 1936 [2-3]. Here, we present a case of ameloblastic fibrodentinoma in a 14-year-old girl with features of ameloblastic fibroma and induction in the form of different types of dysplastic dentin adding a 65th case report to the literature.

A 14-year-old female child reported to the clinical department with a complaint of non-erupted posterior teeth. There was no associated pain or paraesthesia. Medical history and family history were noncontributory. On examination, a swelling 3 x 2.5 cm involving the right mandibular alveolus was seen in the region of 43 to 48. The swelling appeared sessile, soft to firm in consistency, was slightly erythematous on the superior surface, bore the indentation marks of the opposing maxillary teeth (Figure 1) and was non-tender. The teeth 46 and 47 were missing, whereas 45 and 44 were erupted with normal morphology and were well aligned. 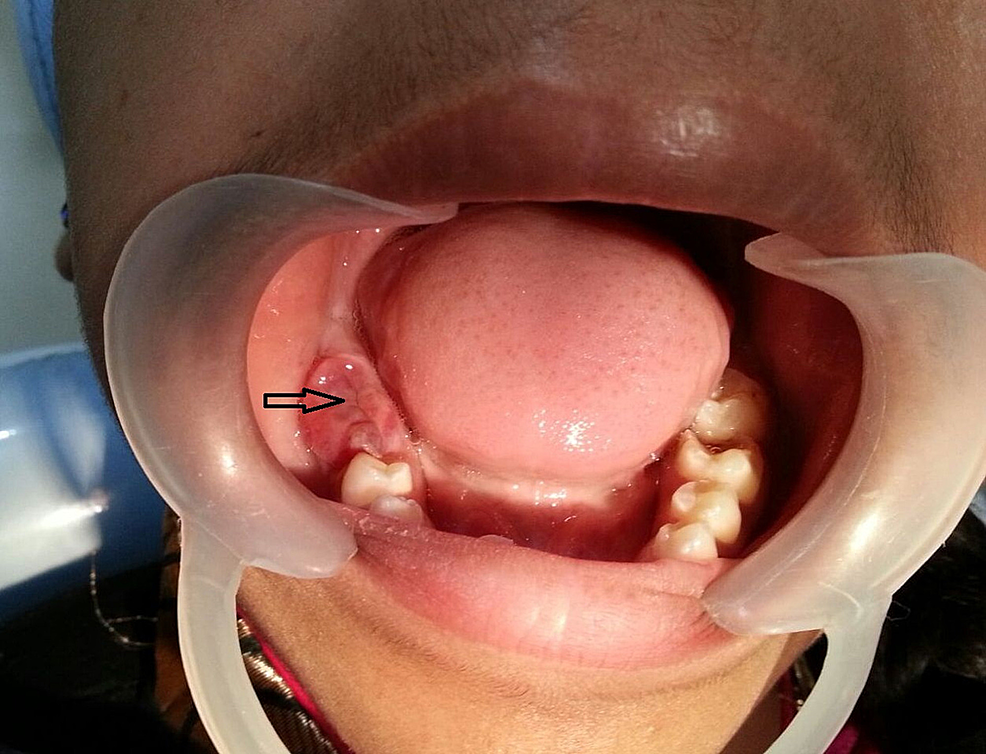 Figure 1: Mild erythematous swelling with the indentation marks of the opposing maxillary teeth is seen on the right posterior alveolar ridge of mandible (Arrow).

An orthopantomogram taken revealed a well-defined unilocular radiolucent lesion in relation to 44 to 48 region. The radiolucency extended from 44 to the retromolar area displacing and impacting 46, 47 and distally displacing developing 48 into the ramus of the mandible. The mandibular right second premolar showed no resorption or displacement but was placed completely in the tumor mass. The displaced 43 was also evident. The alveolar bone was destroyed in the 46 to 48 area, but the lower border of the mandible was guarded (Figure 2). A provisional diagnosis of benign odontogenic tumor was made and an incisional biopsy was done. 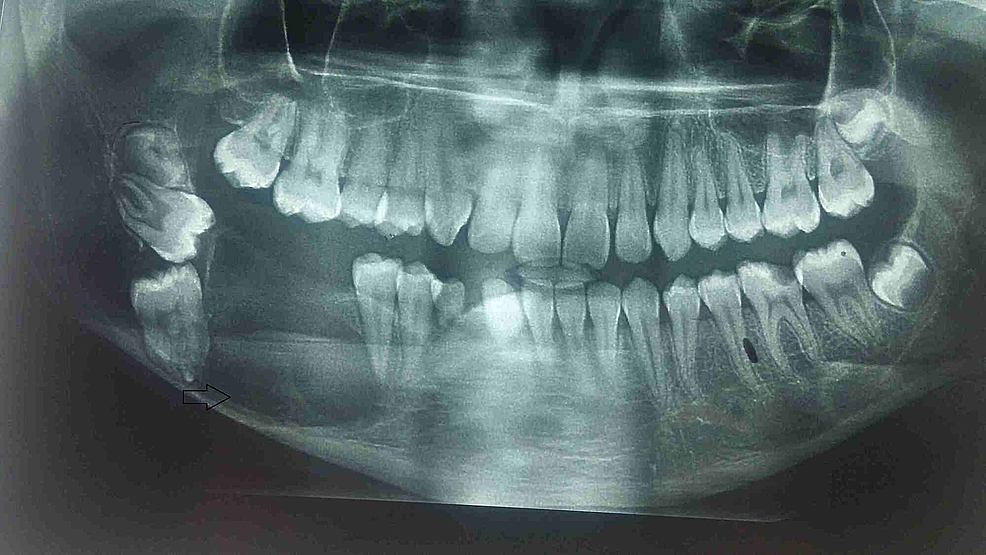 Figure 2: Orthopantomogram showing a well-defined unilocular radiolucent lesion extending from 44 to the retromolar area displacing and impacting 46, 47. The alveolar bone is destroyed in the 46 to 48 area, with intact lower border (Arrow). 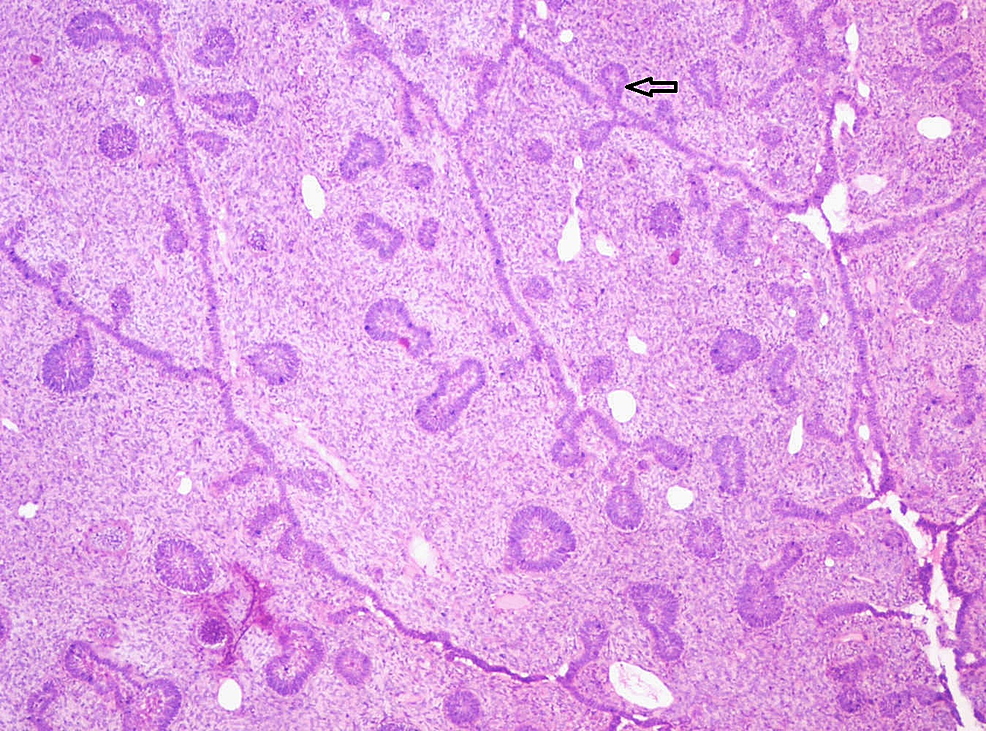 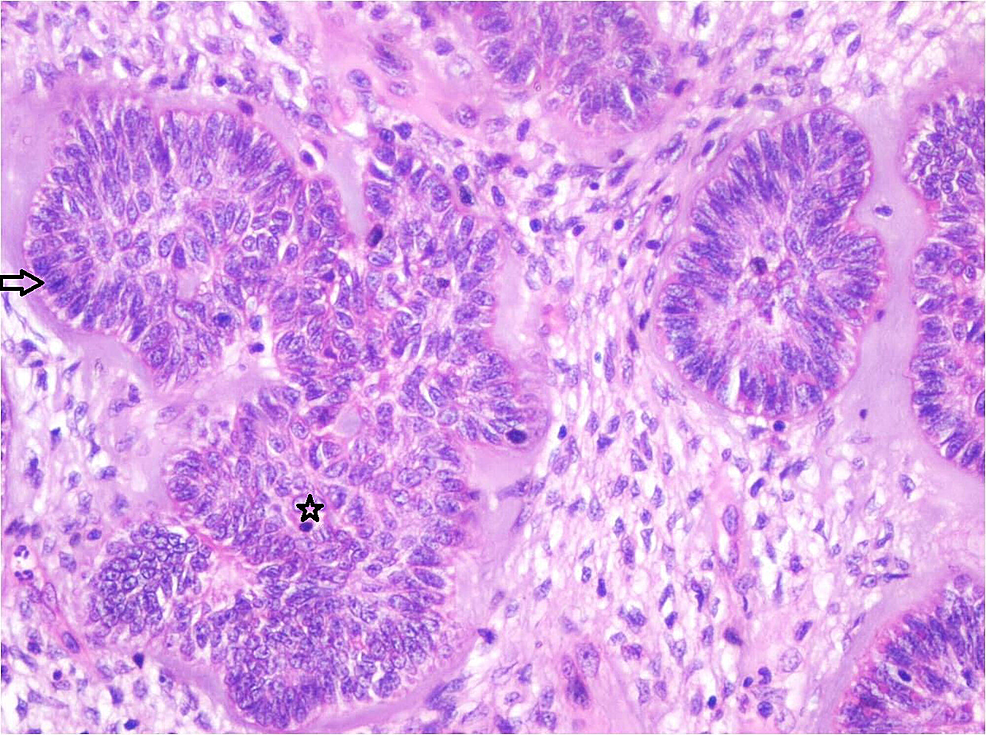 A conservative surgical excision was carried out as the treatment for the lesion. The tumor was soft and friable; hence, it was removed in multiple bits. The tumor could be easily separated from the bony walls. The specimen was received in multiple bits and appeared off-white in color and also on cut section (Figure 5). 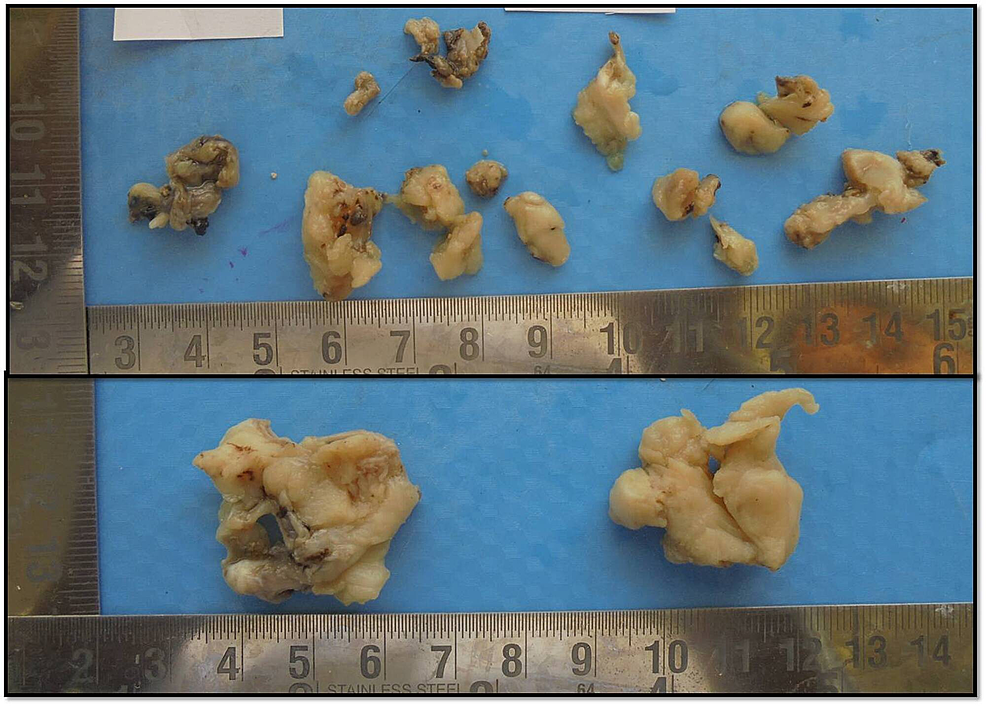 Histopathology of the excisional mass was similar to that of the incisional biopsy. The tumor showed the presence of a capsular structure that was incomplete. Multiple layers of collagen were seen as a capsule along with neurovascular bundles at certain areas. The tumor revealed odontogenic strands in the primitive myxoid ectomesenchymal stroma resembling an ameloblastic fibroma. Dentinoid-like material was evident (Figure 6). 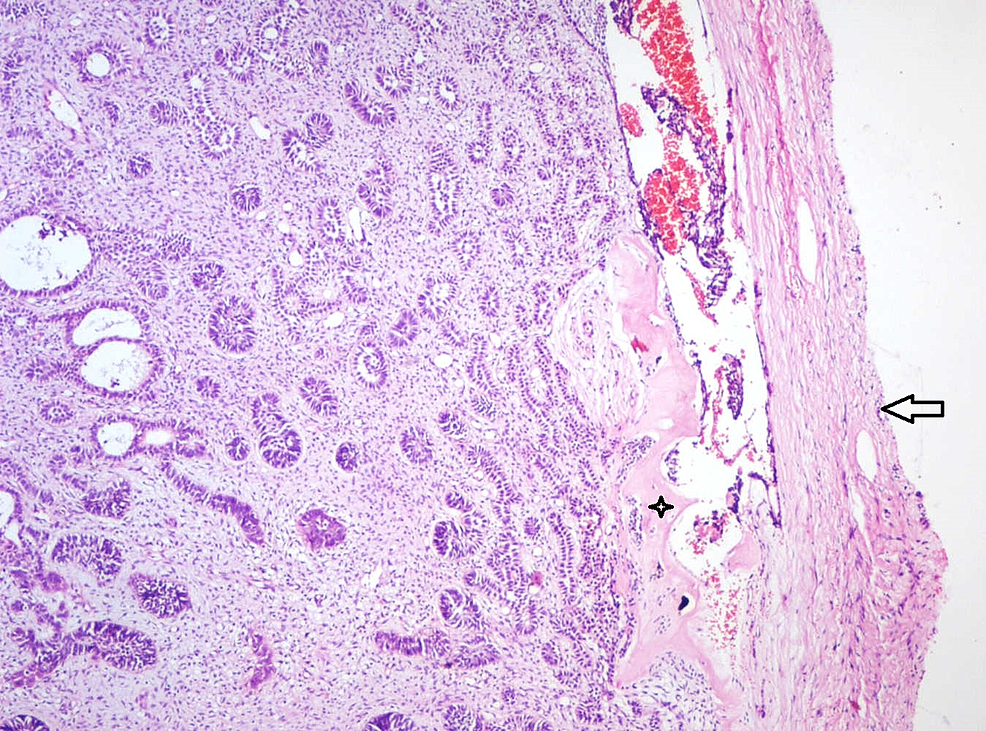 Some new findings added enigma to the histopathological findings. Few areas of odontogenic follicles in the ectomesenchyme which had opened showed central cystic degeneration (Figure 7). In the odontogenic epithelial follicles few areas of clear cells were seen (Figure 8). Few follicles were surrounded by halo-like hyalinization (Figure 9). The tumor showed certain areas that were similar to odontogenic apparatus in the bell stage, with large enamel organ like structures. Tall columnar cells similar to ameloblasts, stratum intermedium and stellate reticulum-like cells were seen (Figure 10). Adjacent to the ameloblast-like cells, dysplastic dentin was laid, dentin with predentin-like areas were seen. Induction of dentin was seen in many areas and in many forms. Some eosinophilic areas next to the epithelium with tall columnar cells that had enticed cells similar to osteodentin were seen (Figure 11). The other areas showed large masses of dentin with globular mineralization (Figure 12). Dentinoid-like tissue was also seen with entrapped epithelial cells in few areas adjacent to the odontogenic epithelium (Figure 13). 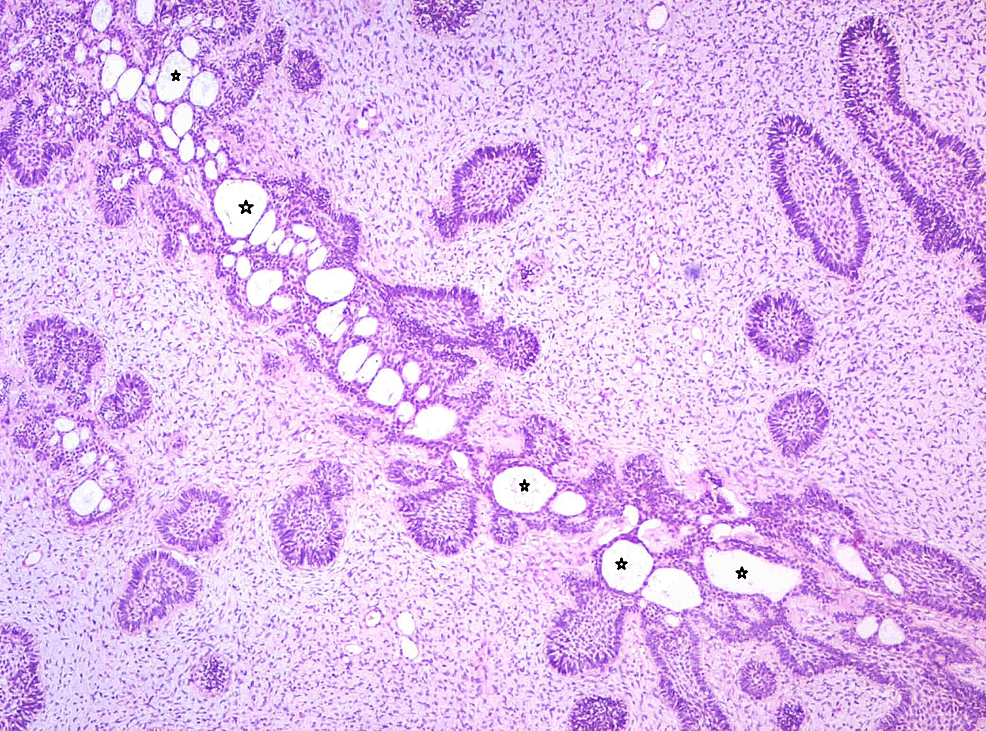 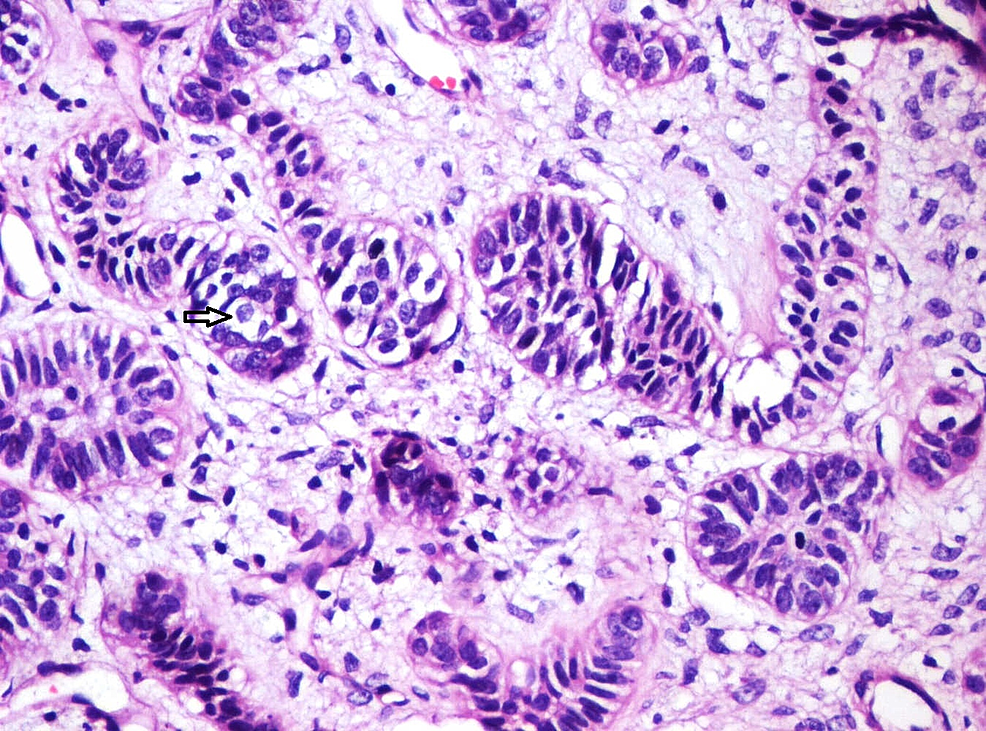 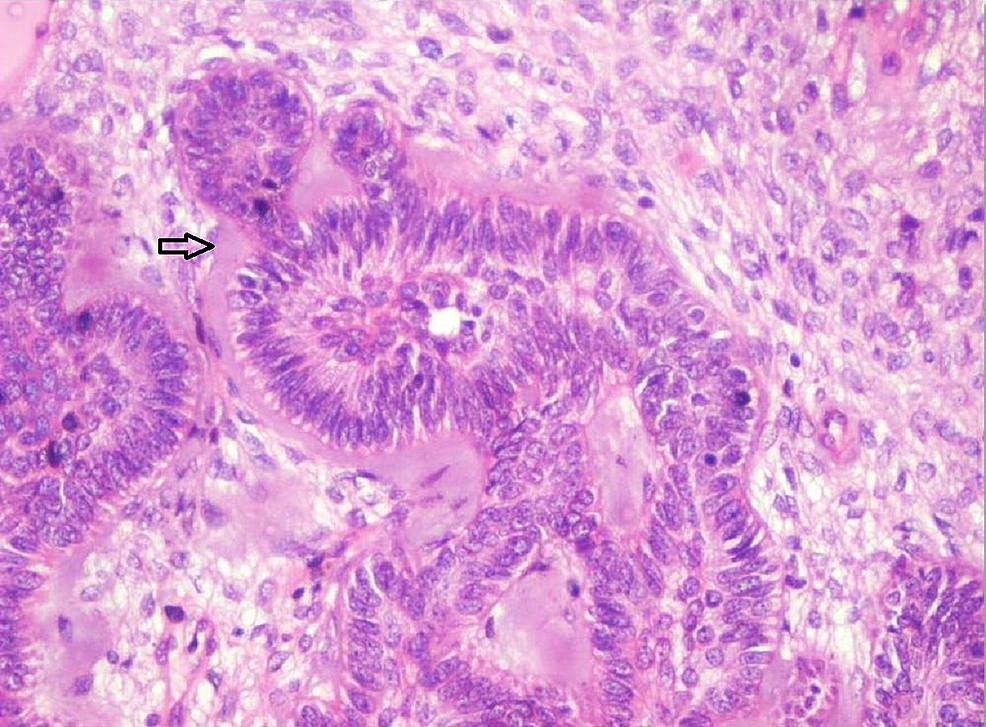 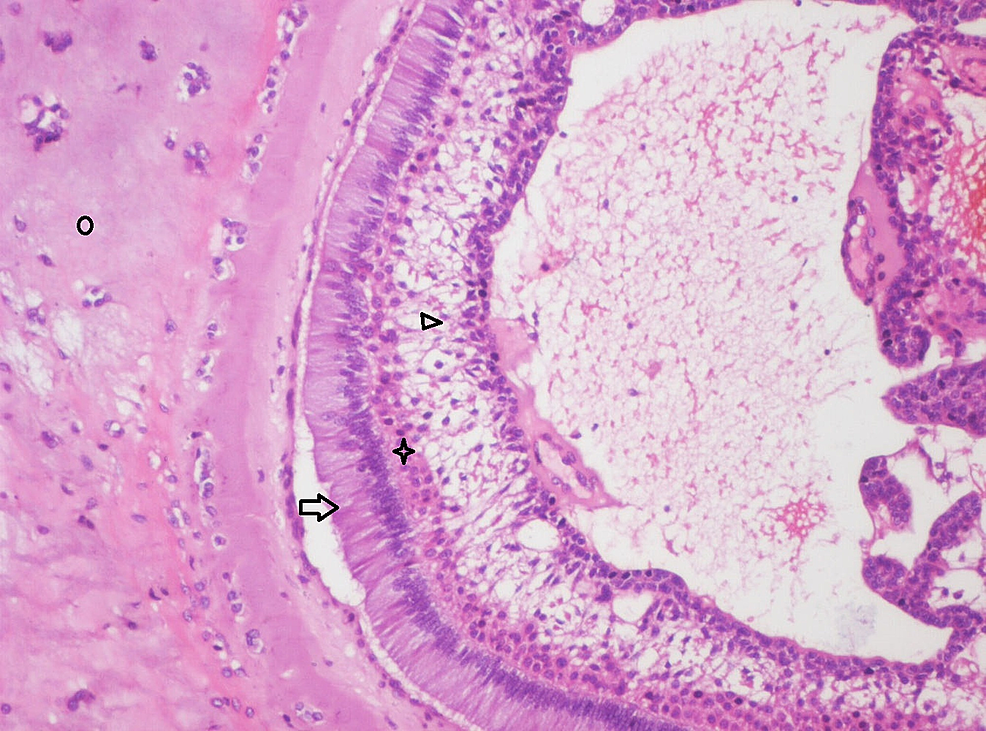 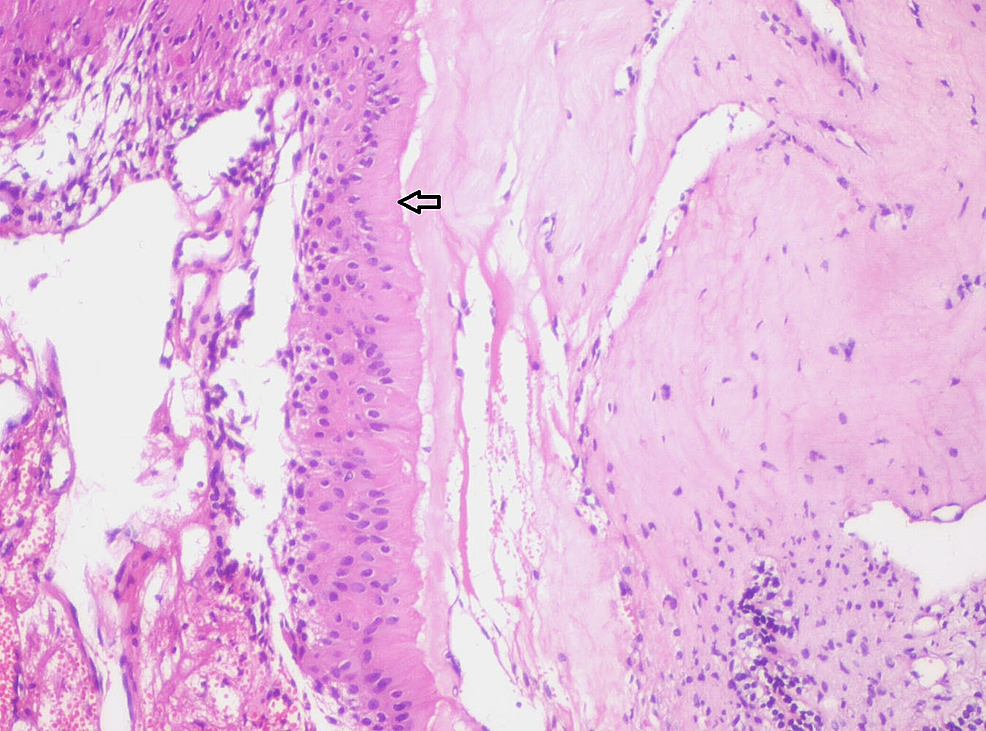 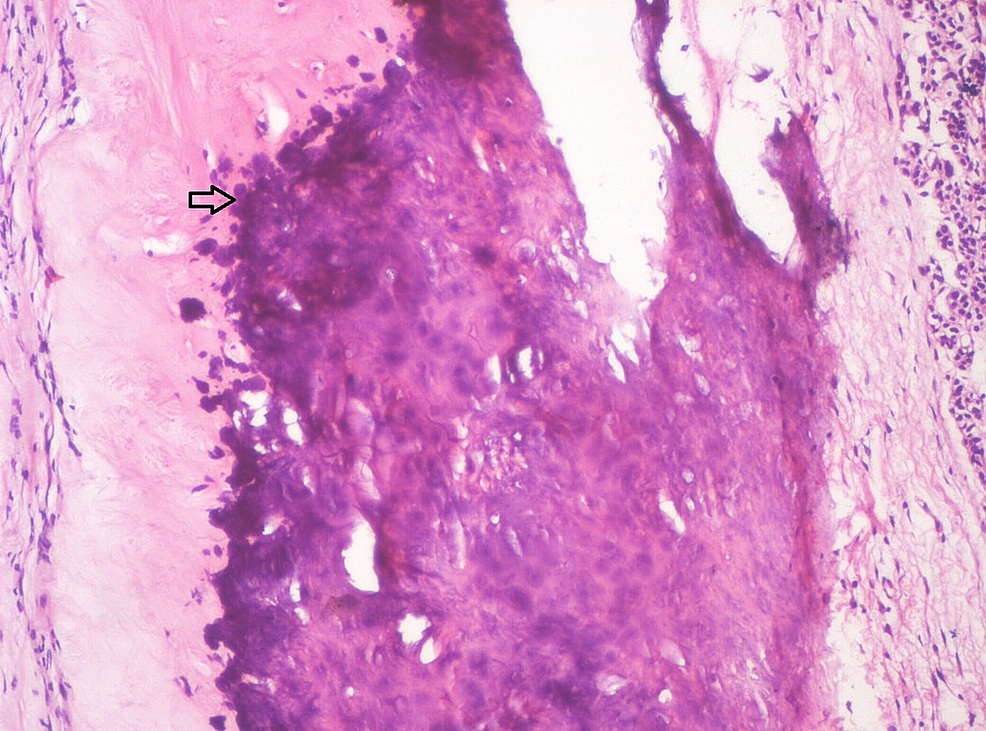 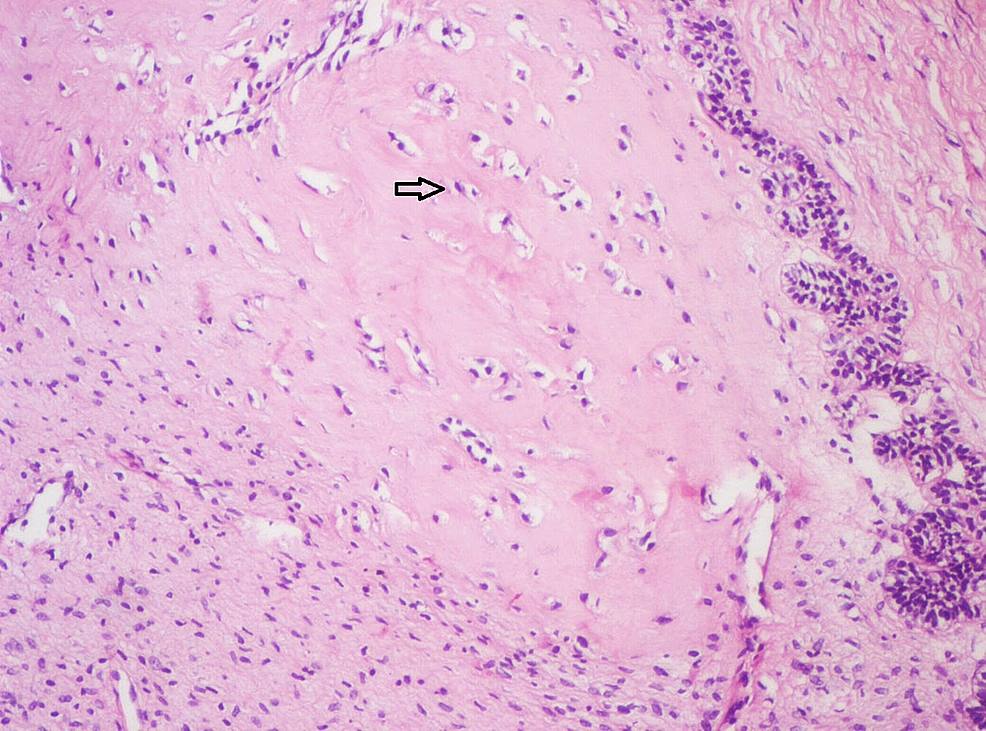 There was no evidence of enamel or enamel matrix formation even after extensive sectioning, ruling out the diagnosis of AFO. The other differentials considered were ameloblastoma. Though, few odontogenic follicles with peripheral columnar cells and central stellate reticulum like cells were evident, highly cellular ectomesenchyme was also present impressing that the tumor showed proliferation of both epithelial and mesenchymal components, whereas ameloblastoma shows proliferation of only epithelial component and even the conventional reversal of polarity of the ameloblast-like cells was also not seen, thus ruling out ameloblastoma [3].

AFD is a rare neoplasm of odontogenic epithelium with immature ectomesenchyme and formation of dysplastic dentin. For a while it had also been named as a dentinoma [3-4].

Controversy surrounds the categorization of AFDs. The continuum concept with AF, AFO, and odontomas proposed by Cahn and Blum remains disproved on the basis of age of occurrence, site of occurrence, histopathology, gender, and evidence studied in recurrent cases [2-5].

The 2005 WHO classification included AFDs under AFs, but the periostin activity studied by Chau, et al. disapproves this categorization, as AFs did not show increase in periostin activity in the stroma with increasing maturity, and concluded that AFs should be regarded as a true neoplasm whereas AFO is more likely a developing odontoma [6-8]. The recent 2017 WHO classification considers AFDs to be a hamartomatous process based on the consensus that once the hard tissue is formed they mature to form odontomas [1]. However, cases have been reported where AFDs show enhanced growth enlarging to considerable sizes causing cortical plate perforation. There have been reports where recurrence and malignant transformation have been noticed, which show the tumor to have significant growth potential and thus be a true neoplasm [2,4-5]. We propose AFDs to be recognized as an independent tumor entity and acknowledge its rarity.

AFD is very similar to AF and AFO in biological certainty. Generally, a slow growing asymptomatic tumor, in some instances is associated with unerupted teeth and is commonly seen before the age of 20 years with a male predilection, the ratio being 2:1. Most of them are intraosseous tumors in the posterior mandibular region with about 30% showing cortical perforation. It has been observed that AFD in relation to permanent teeth are commonly seen in the posterior region, whereas those in relation to deciduous teeth are seen in the anterior region [2,5]. Radiologically, AFD are well delineated radiolucencies with varying degrees of radiopacity and frequently found in relation to malposed, unerupted teeth [6].

The present case though was seen in a 14-year-old female patient, presented in the mandibular right posterior quadrant involving unerupted 46, 47, and 48 as a unilocular, well-defined radiolucency of approximately 3 x 2 cm, but no such opacity nor cortical perforation was seen. The alveolar ridge superiorly was completely destroyed allowing the tumor to present as a soft tissue mass extending on the alveolar ridge in the region of 43 to 48.

It may be suggested that that all the tissue bearing resemblance to dentin should be considered as odontogenic/dentin induction in normal or dysplastic form. However, hyalinization needs to be categorized as non-dentinal or non-specific induction in the ecto-mesenchyme, the significance of which is not very clear or specific and might be an abortive effect too. More work needs to be done in detailing and recognition of inductive changes in odontogenic tissues and tumors.

The present case clearly shows a clinical presentation that depicts a destructive tumor. The histopathology showcases a varied amount and variety of dysplastic dentin, validating true odontogenic induction in the tumor. Hence, we think that this case might add value to understand it as a true independent entity among odontogenic tumors.

We would like to thank the staff and postgraduate students of the Department of Oral and Maxillofacial Pathology, Krishnadevaraya College of Dental Sciences for their constant support and help.

© Copyright 2017
Bavle et al. This is an open access article distributed under the terms of the Creative Commons Attribution License CC-BY 3.0., which permits unrestricted use, distribution, and reproduction in any medium, provided the original author and source are credited.

Figure 1: Mild erythematous swelling with the indentation marks of the opposing maxillary teeth is seen on the right posterior alveolar ridge of mandible (Arrow).

Figure 2: Orthopantomogram showing a well-defined unilocular radiolucent lesion extending from 44 to the retromolar area displacing and impacting 46, 47. The alveolar bone is destroyed in the 46 to 48 area, with intact lower border (Arrow).

Sensitivity and Specificity of Bedside Qualitative Troponin I Test Kit as Co ...