Multiple myelomas (MM) of the immunoglobulin D (IgD) subtype is rare amongst plasma cell malignancies. It can present a diagnostic challenge because of the low amount of immunoglobulin in the serum. The amount of monoclonal (M)-protein is often undetectable on electrophoresis. Historically, survival in these patients was typically shorter compared to the immunoglobulin A (IgA) and immunoglobulin G (IgG) subtypes due to advanced disease upon presentation. With the advent of better diagnostic techniques, the prognosis of this disease is changing. We describe a case of an extramedullary testicular plasmacytoma (EMP) of the IgD subtype as the primary feature of MM, which responded well to novel therapy.

IgD myeloma was considered a diagnostic challenge due to undetectable M-protein levels on serum protein electrophoresis (SPEP). With the advent of serum free light chain assay and serum and cytologic examinations, diagnostic accuracy has significantly improved. The IgD subtype is commonly associated with poor clinical outcomes. However, the use of novel agents and autologous transplant has changed the prognosis of this disease.

Multiple myelomas (MM) is a malignant neoplasm of proliferative plasma cells which accounts for 10% of all hematological cancers and 1% of all cancers [1]. It is characterized by proliferation of a single malignant clonal plasma cell in the bone marrow resulting in an abnormal increase in monoclonal immunoglobulin (Ig) protein. Ninety percent of all myelomas are immunoglobulin G (IgG), immunoglobulin A (IgA) and the light chain with a prevalence of 52%, 21%, and 16% respectively. Immunoglobulin D (IgD) myeloma is relatively uncommon, with a prevalence of 1-2% [2], however, its prevalence has been more notable in East Asian countries.

An abnormal increase in monoclonal Ig causes end-organ damage commonly manifesting as hypercalcemia, renal insufficiency, anemia, and lytic bone lesions. Extramedullary involvement can precede the development of frank myeloma, occur at diagnosis or during the course of the disease [1]. Extramedullary plasmacytoma (EMP) can involve multiple anatomic sites. The head and neck are common with a predilection for the respiratory and gastrointestinal (GI) tract [3-4]. Skin, soft tissue, lymph nodes, liver, ovaries, and testicles are less common sites of involvement [3,5]. Isolated testicular plasmacytoma is considered as an advanced disease upon presentation. Following the first reported case in 1939, less than 51 cases of testicular plasmacytoma have been reported [5]. This case report presents a testicular plasmacytoma of IgD subtype as the primary presenting site of an underlying MM. The patient was treated with right radical orchiectomy, followed by myeloma directed chemotherapy.

A 72-year-old White male presented to the emergency room with a right testicular mass and fatigue for three months. He had multiple co-morbid conditions including diabetes, hypertension, cardiomyopathy status post automated implantable cardioverter-defibrillator (AICD) and renal insufficiency. He denied fever, back pain, and night sweats. He also denied weight loss, although we do not have a record of his prior weight to compare. His physical examination was unremarkable except for a right testicular mass with mild local tenderness.

The patient was diagnosed with stage 3 international staging system (ISS), IgD lambda multiple myeloma four months after the onset of symptoms. His performance status was marginal. The selected treatment plan was initiated one month after diagnosis was made. We administered double chemotherapy protocol, as he was not an appropriate candidate for autologous stem cell transplant (ASCT) secondary to age and comorbidities. Bortezomib and Dexamethasone were started. The patient’s performance status improved after three months, and at that time, a once-daily dose of Lenalidomide was added to the regimen. He showed excellent response to the treatment which was reflected in his clinical and biochemical (particularly anemia and metabolic) profiles. Although his renal function did not return to normal, it remained stable without progression. His IgD protein burden decreased from 4210 mg/dL to 20 mg/dL after nine total cycles of combination therapy. Follow-up serum protein electrophoresis (SPEP) and immunofixation studies did not show M-protein, and his repeat bone marrow biopsy and FISH study were also unremarkable. Dexamethasone was gradually tapered within a three to a six-month interval, and he was kept on low dose Lenalidomide daily. On his last follow-up visit in the clinic, Hb was 13 g/dL, white blood cell (WBC) 4.4 k/uL, platelets 107000/mm3, and creatinine was 2.6 mg/dL. He had a progression-free survival (PFS) of approximately three years and remained in complete remission. One year after remission, the patient was admitted to the intensive care unit for respiratory failure secondary to pneumonia. He, unfortunately, passed away one month after admission due to complications unrelated to his oncologic condition. 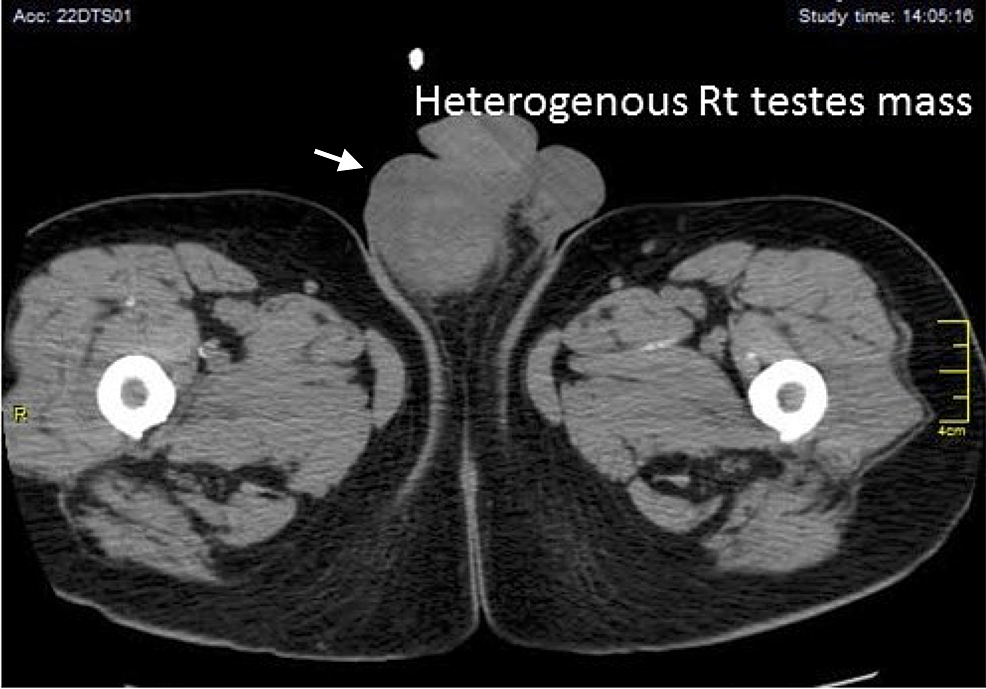 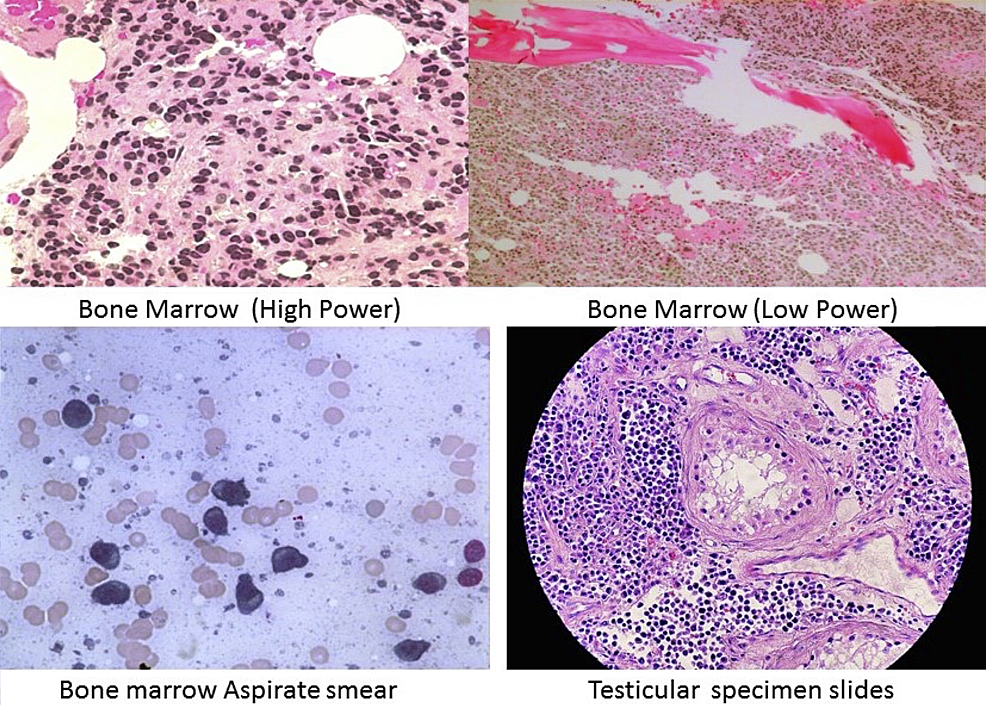 Extramedullary involvement has been described in approximately 13-19% of myeloma patients, and most commonly affects males. It typically occurs at advanced stages as the myeloma plasma cells infiltrate locally in bone or in soft tissues. IgD secreting plasma cells are a product of somatic hypermutation of the IgD region from germinal center B cells. It is clinically characterized by a reversed light chain ratio, a very low M-spike on SPEP, and short survival time [7-8]. Prevalence of extramedullary plasmacytoma (EMP) in IgD myeloma is around 19-63% with usual sites being the chest wall, respiratory tract, gastrointestinal tract (GI) tract, skin, lymph nodes, and paraspinal areas with isolated testicular involvement being extremely rare [1,9]. The first case of IgD lambda related testicular tumor was reported by Kubonishi I, et al. in which a patient presented three months after orchiectomy with an abdominal mass and ascites. An ascitic fluid study revealed aneuploidy and 1q+, 2p+, and 14q+ - of myeloma plasma cells [9].

EMP’s in myeloma is associated with poor prognosis. Varettoni M, et al. described poor PFS (18 vs 30 months) in myeloma-related EMP diagnosed at presentation versus at follow-up [9]. The case we describe is the second report of IgD lambda myeloma manifesting as a testicular plasmacytoma on the initial presentation that we are aware of. Similar to the first cited case, our patient also underwent orchiectomy, but unlike the former, he responded excellently to combined chemotherapy and remained in remission for almost three years without relapse or complication during his clinical course. His karyotype was normal, but cytogenetic studies were positive for CCND1/IGH rearrangement and loss of TP53.

The prognosis of IgD myeloma has been described as very poor, with a median overall survival time of fewer than two years. However, in recent years following the availability of novel agents and ASCT, the prognosis has significantly improved [7-8], as exemplified by our patient’s case. Shimamoto, et al. proposed that light chain subtype and WBC were significant predictors of survival noting that individuals with white blood cells (WBC) count < 7 × 109/L and the k subtype were low risks, with a five-year overall survival (OS) of 66% [10].

It is important to note that our patient’s multiple myeloma had an excellent response to combined chemotherapy. Perhaps the poor prognosis previously described in the medical literature is related to early stage misdiagnosis as a result of a low M-spike, due to the absence of novel agents, or possibly a combination of both factors. These are merely speculations and future studies of IgD myeloma patients are necessary to determine whether the observed favorable response to treatment was related to the combination of novel agents, to factors such as WBC and light chain subtype (k/l) or to both [10].

Immunoglobulin D (IgD) myeloma has been a diagnostic challenge due to an undetectable M-spike on SPEP. Malignant plasma cells can infiltrate unusual anatomic sites and can be the presenting feature of MM. This case demonstrates a relatively rare presentation and subtype of a common disease. It illustrates the response to novel therapy of this particular subtype and can guide future research in diagnosis and treatment. Furthermore, it is unknown if abnormal cytogenetics has an effect on a particular treatment or has prognostic value. Biology of the IgD subtype and its implications for treatment and prognosis, therefore, remains an important field for future exploration to improve outcomes for our patients.

Human subjects: Consent was obtained by all participants in this study. Ethics approval and consent to participate

Statement of waiver on ethic approval and consent to participate

I believe that this article is eligible for waiver ethics approval and consent because the article meets all of the following criteria:
1.The article is a case report.
2.The research presents no more than “minimal risk” of harm to subjects.
3.The waiver or alteration will not adversely affect the rights and welfare of the subjects.
Consent for publication
Consent for publication is waived since unfortunately, the patient passed away before we start writing the case report. We attempted to contact his family several times through phone calls but failed. We would continuously try to acquire consent from his family.
. Conflicts of interest: In compliance with the ICMJE uniform disclosure form, all authors declare the following: Payment/services info: All authors have declared that no financial support was received from any organization for the submitted work. Financial relationships: All authors have declared that they have no financial relationships at present or within the previous three years with any organizations that might have an interest in the submitted work. Other relationships: All authors have declared that there are no other relationships or activities that could appear to have influenced the submitted work.

© Copyright 2017
Sharma et al. This is an open access article distributed under the terms of the Creative Commons Attribution License CC-BY 3.0., which permits unrestricted use, distribution, and reproduction in any medium, provided the original author and source are credited.

Evaluation and Expression of Survivin in Potentially Malignant Lesions and S ...