Third degree or complete heart block (CHB) is a medical emergency and usually requires permanent pacemaker placement. CHB can be caused by cardiac ischemia or non-ischemic conditions such as infiltrative diseases or fibrosis. The purpose of this study is to identify the baseline clinical characteristics associated with ischemic versus non-ischemic causes of complete heart block and compare their outcomes.

An institutional review broad approval was granted by the Cleveland Clinic Health System. In our study, 216 patients with CHB presenting to Fairview Hospital between January 2014 and June 2016 were initially identified using the International Classification of Disease (ICD) codes at discharge. Only the patients with a new diagnosis of complete heart block (CHB) were included in the study (total N=62), which led to the exclusion of 154 patients. The patients were characterized into non-ischemic and ischemic groups based on cardiac marker elevation, electrocardiogram changes and/or cardiac catheterization findings. In all the patients, data including the following was collected: demographics such as age, gender, ethnicity and body mass index; pre-existing comorbidities such as hypertension, chronic kidney disease, diabetes mellitus, thyroid disease, previous coronary artery disease, history of cancer; use of nodal blocking agents, electrolyte abnormalities on admission, echocardiographic parameters such as ejection fraction (EF), right ventricular systolic pressure (RVSP), left ventricular end diastolic and systolic volumes (LVEDV and LVESV, respectively). The primary outcome was all-cause mortality and the secondary outcome was pacemaker placement. Categorical variables were analyzed using chi-square and continuous variables using ANOVA.

Patients with ischemic CHB are younger, and they have a lower ejection fraction but they are less likely to get a pacemaker compared to non-ischemic CHB. Further studies with a bigger sample size are required to understand the long term mortality outcomes of patients with CHB.

Third degree heart block is the complete block or dissociation between the atria and the ventricles and a condition when none of the atrial impulses reach the ventricle. The causes of the third degree heart block in children could be congenital [1] or familial [2] and in adults is related to ischemia (of atrioventricular node) or could be non-ischemic including increased vagal tone, fibrosis (Lenegre's disease in patients with age <60) [3], sclerosis (Lev's disease in patients with age >70) of the conduction system [4], electrolyte abnormalities, infiltrative diseases or iatrogenic including nodal blocking medication, cardiac surgery, catheter ablations, and transcatheter aortic valve implantation.

They may be asymptomatic in very few number of cases. The presenting complains mostly include weakness, dizziness, palpitation, dyspnea, or syncope [5]. Diagnosis of the third degree heart block can be made by a 12-lead electrocardiogram and usually requires permanent pacemaker as treatment.

In this study, we try to understand the clinical characteristics pertaining to new onset CHB and carefully analyze the outcomes in ischemic and non-ischemic CHB patients as there is no comparison between these groups.

This is a retrospective observational cohort of patients admitted to the Fairview hospital from January 2014 to June 2016 with third degree heart block. The diagnosis was confirmed by an electrocardiogram by a cardiologist. The study was approved by the institutional review board of the Cleveland Clinic. Individual consent was waived because of the retrospective nature of the study.

The patients were initially identified using the International Classification of Disease (ICD) codes applied at discharge including both ICD-9 and ICD-10 codes as there was a transition during the requested time frame. In our study, 216 patients who had a third degree heart block in their billing codes were initially identified. Patients with the age >18 years and a new diagnosis of the third degree heart block were included in the study. Patients with a pre-existing/known history of CHB and congenital heart disease were excluded from the study. This led to the exclusion of 154 patients. Data was collected by reviewing the electronic medical records. The ischemic and non-ischemic CHB were differentiated by cardiac markers elevation, ischemic electrocardiogram changes and/or cardiac catheterization. The differentiation was made by the cardiologists.

Data analysis was performed using IBM SPSS Statistics Version 23 (IBM Corp, NY, USA). The categorical variables were compared using Fisher’s exact method as there were cells with less than count of five. The continuous variables were compared using analysis of variance (ANOVA). An analysis of covariance (ANCOVA) model was created to assess the difference in initial ejection fraction and the follow-up ejection fraction to see if there was any statistically significanct difference between both groups. 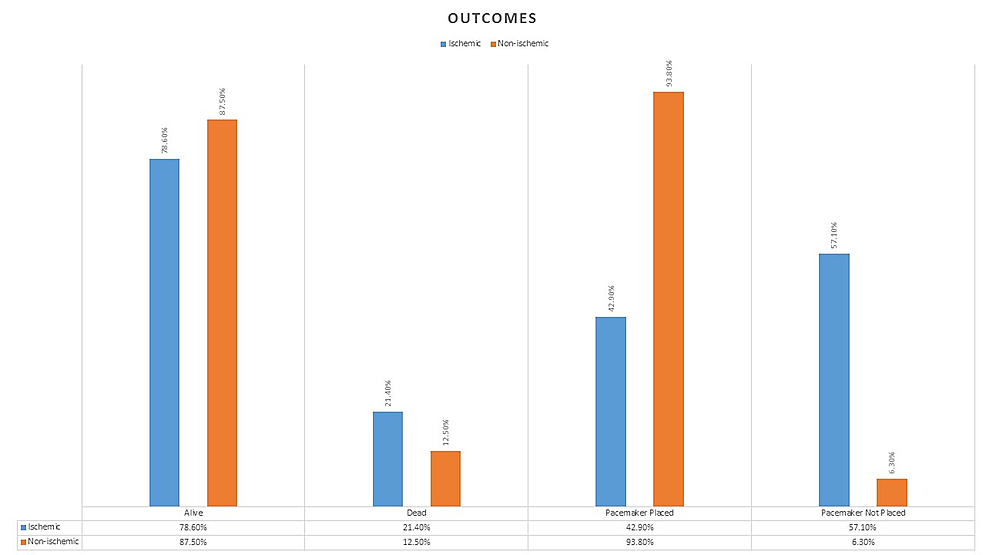 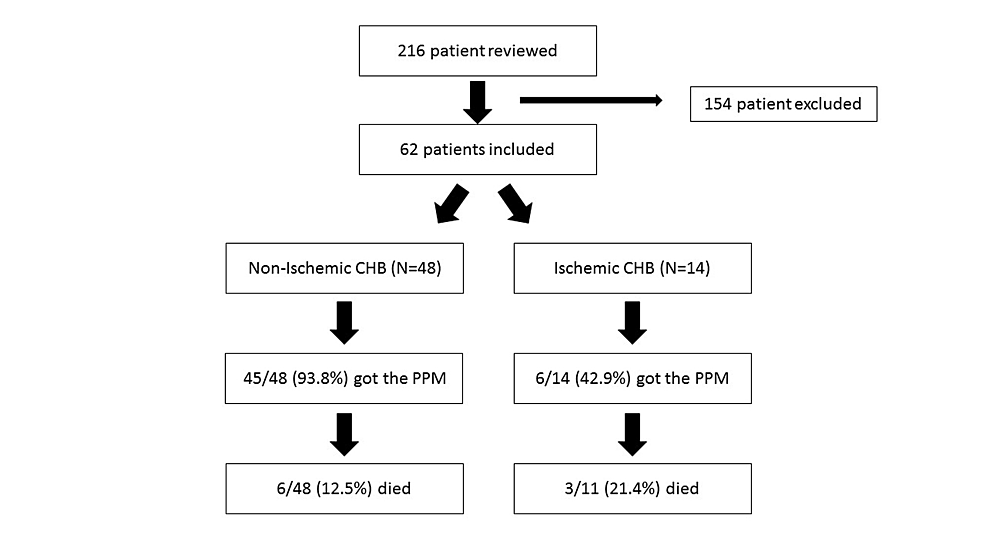 Further, an ANCOVA model was created to assess the difference between both groups in terms of the initial and follow-up ejection fraction (EF). Follow-up EF was reported for 20 patients out of whom three had ischemic CHB and 17 had non-ischemic CHB. There was no statistical difference (p=0.909) in the means of the EF difference at the time of diagnosis and follow-up visit.

Ischemic and non-ischemic complete heart blocks are dealt as separate entities and we tried to study them head to head. We found no difference in terms of the pre-existing comorbidities including diabetes mellitus, hypothyroidism, hypertension, use of nodal blocking agents or chronic kidney disease. However, the patients with ischemic CHB are younger and frequently have a previous history of coronary artery disease compared to non-ischemic CHB patients. The ejection fraction is also lower in the ischemic CHB group, which is expected because of active myocardial ischemia/infarction. The right ventricular systolic pressure was higher in patients with non-ischemic CHB, which might suggest some relationship with pulmonary hypertension, but this difference was not statistically significant.

Patients with ischemic complete heart block are less likely to get a pacemaker. They are younger with a lower ejection fraction at presentation and have a more frequent history of coronary artery disease. We need more studies with a bigger sample size to establish the mortality difference between them.