The central nervous system international prognostic index (CNS-IPI) is being used widely for the identification of patients with diffuse large B cell lymphoma (DLBCL) with a high risk of central nervous system (CNS) relapse. The aim of our study is to confirm the value of the CNS-IPI in predicting CNS relapse in our young study population and to evaluate its impact on the selection of patients for CNS prophylaxis.

A total of 354 patients were included. The median age was 46 years. Overall, 5% of the patients developed CNS relapse. Median survival after CNS relapse was seven months. Two-year CNS relapse rates according to CNS-IPI were 0.7%, 5.1%, and 26% for low, intermediate, and high-risk, groups respectively.

Although CNS-IPI helps in better selection of DLBCL patients for CNS prophylaxis, it can possibly increase the number of patients exposed to unnecessary prophylaxis. More investigational biomarkers are needed to better refining high-risk patients.

Diffuse large B cell lymphoma (DLBCL) is the most common lymphoma in adults, representing about one-third of newly diagnosed cases [1,2]. Using the standard combination chemo-immunotherapy rituximab, cyclophosphamide, doxorubicin, vincristine, and prednisone (RCHOP) regimen, 70% of cases are expected to be cured, while 30% will have the refractory or relapsed disease [3,4]. Although relapse in the central nervous system (CNS) is relatively rare, occurring in about 2-4% [5,6], it is a devastating event with a median survival of usually less than six months [7,8].

Many studies have attempted to identify risk factors for CNS relapse, with inconsistent results due to the heterogeneity in the patient population, limited sample size, and the fact that many were performed in the pre-rituximab era [9-11]. Accordingly, patients were variably selected for administration of CNS prophylaxis, mostly based on anatomical location (breast, testis, bone, cranial sinuses, and epidural space) and disease stage [12].

In 2016, Schmitz et al. developed the CNS-IPI using data of 2164 patients treated on prospective German High-Grade Non-Hodgkin Lymphoma Study Group (DSHNHL) studies and was validated in 1597 patients treated with RCHOP in British Columbia Cancer Agency (BCCA) [13]. Since then, the CNS-IPI has been adopted to evaluate the risk of CNS relapse by several national and international guidelines [14,15].

An accurate selection of the patients who need administration of various treatments to prevent CNS relapse is crucial, given the associated toxicities and the demand it causes on hospital services. The impact of CNS-IPI in selecting patients for screening of CNS involvement and administration of CNS-directed prophylaxis is not well studied. Our study aimed to validate CNS-IPI (as a separate scoring) in our patient population and to evaluate the indications for intrathecal chemotherapy (ITC) prophylaxis before the adoption CNS-IPI to estimate the impact of using CNS-IPI on the treatment of DLBCL.

We retrospectively analyzed medical records of adult patients diagnosed with DLBCL without evidence of CNS involvement at diagnosis and treated with RCHOP regimen at the Department of Medical Oncology, King Hussein Cancer Centre in Jordan from January 2010 till December 2018.

The selection of patients for administration of CNS prophylaxis was mostly based on the discretion of the treating physician as the previous guidelines didn't specify specific indications. ITC was the only treatment given to prevent CNS relapse.

CNS relapse was diagnosed based on either the radiological findings, cerebrospinal fluid cytology, or brain biopsy. The CNS-IPI was calculated using age, stage, ECOG performance status, LDH, number of extranodal sites, and renal and adrenal gland involvement, and patients were classified as low risk, intermediate, or high risk, as previously described [13].

All patients were treated with RCHOP. The number of chemotherapy cycles was based on the initial disease stage and interim radiological response, with a median of six cycles (range, 3-8).

Two hundred and eighty-eight patients (81.3%) achieved a complete response (CR), and the rest were considered to have refractory disease. After a median follow-up of 27.7 months, 39(11%) patients developed relapse and 249 (70.3%) patients remained disease-free.

ITC with each cycle of chemotherapy was given to prevent CNS relapse to 52 (14.6%) patients. A median of four doses (range, 2-8) was given. The characteristics of the patients and the indications for ITC are detailed in Table 1. Sixteen patients (53%) with high-risk anatomical sites were given ITC.

CNS was the only site of relapse in six patients (35.3%), while it occurred before, concurrently with or after systemic relapse the remaining 11 patients (64.7%). Detailed characteristics of patients with CNS relapse are in Table 2. 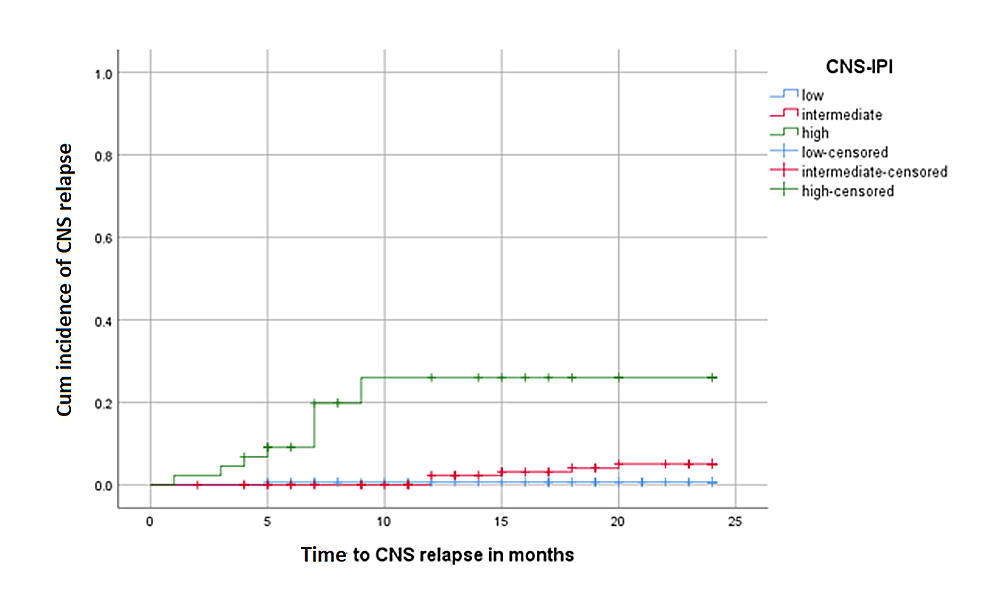 Figure 1: Cumulative incidence of CNS relapse according to CNS-IPI in all patients

Among patients with high-risk anatomical sites (n=30), two patients (6.6%) developed CNS relapse; one with breast involvement who didn’t receive ITC and the other with epidural mass who received ITC.

Among patients with CNS relapse, five patients (29.4%) were given ITC. When considering CNS-IPI risk groups, there was no significant difference in CNS-IPI risk categories in patients with CNS relapse given ITC (intermediate in one (20%) patient and high in four (80%) patients) or those with no ITC (low, intermediate and high in one (8.3%), five (41.7%0 and six (50%) patients respectively), p = 0.15. Among high-risk patients, there was no difference in CNS relapse between patients given ITC and the group who didn’t receive ITC (Table 4). 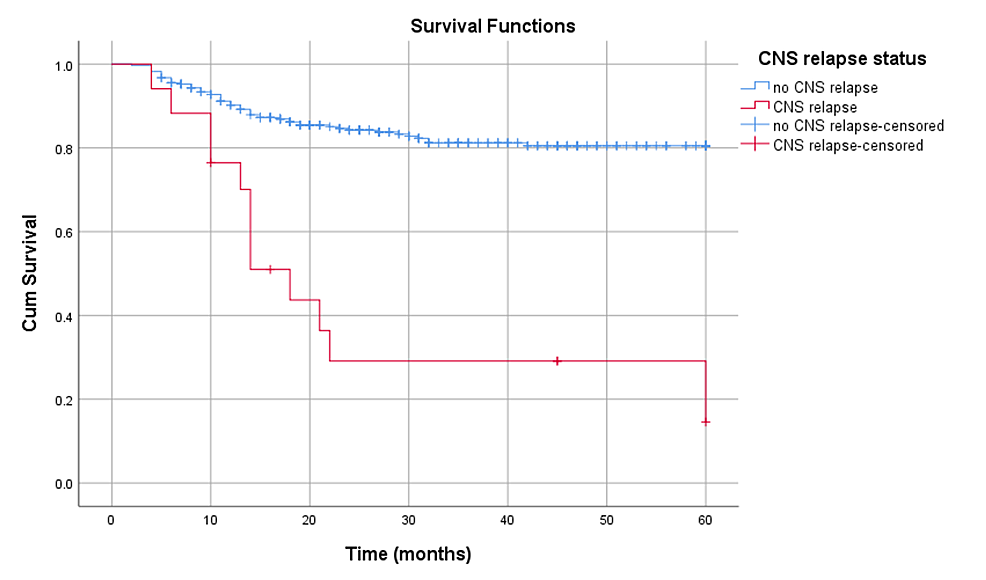 Analyzing the risk of CNS relapse in DLBCL is challenging as this is a rare event. The selection of patients for CNS prophylaxis is even more complex and depends on clinical and biological factors with varied indications in most of the published trials.

In five of the DHSNHL trials, prophylaxis was mandated for patients with bone marrow, testicular, or head and neck lymph nodes involvement [13] while in the United Kingdom National Cancer Research Institute (UK NCRI) trial, prophylaxis was given to patients with bone marrow, peripheral blood, nasal/paranasal sinuses, orbit, and testicular involvement [6].

We confirmed the value of CNS-IPI in predicting CNS relapse in a relatively younger age group as the median age of our patients is 15-20 years less than patients included in most of the studies published in this regard [6,11,13].

In addition to high CNS-IPI, involvement of certain anatomical sites (breast, uterus, testis, and epidural space) may increase the risk of CNS relapse irrespective of the CNS-IPI [19-22]. Given the fact that the involvement of these sites is rare, they were underrepresented or even excluded from many prospective trials [9]. Guidelines vary in selecting these patients for CNS prophylaxis. For example, National Comprehensive Cancer Network (NCCN) guidelines recommend prophylaxis for patients with testicular, breast, and cutaneous DLBCL [14], while the Spanish lymphoma group recommends that patients with testicular, breast, kidneys, or adrenal glands and epidural space involvement should receive prophylaxis [15]. In our study, 30 (8.4%) patients had high-risk anatomical sites, among which CNS-IPI was high in two (6.6%) patients and CNS relapse occurred in two (6.6%) of the 30. Involvement of the tonsils and paranasal sinuses was associated with an increased risk of CNS relapse (6%) in the pre-rituximab era, but this risk decreased to 1.6% when rituximab was incorporated in the primary therapy [23].

Despite the high correlation of CNS-IPI with the risk of CNS relapse, its positive predictive value in the original Schmitz et al. trial is low (12%), resulting in a significant proportion of patients that may unnecessarily receive prophylaxis [9,13].

The use of biomarkers may further help to identify high-risk patients. Two large studies evaluated the impact of the cell of origin (defined by gene expression profiling) on CNS relapse with conflicting results [24]. High-grade lymphomas with MYC and BCL 2 translocation (double hit) represent about 5% of all large B cell lymphomas with CNS involvement at diagnosis or relapse approaching 50% [25]. On the other hand, expression of MYC and BCL2 (double expressor) without translocation occurs in about 30% of DLBCL, the risk of CNS relapse appears to be increased in patients with activated B cell subtype and intermediate or high-risk CNS-IPI [26].

The best approach for the prevention of CNS relapse is still controversial because of the lack of well-randomized prospective trials, conflicting evidence, and potential toxicity. Although ITC is commonly used, evidence of efficacy is conflicting. Some studies showed that it is effective, but many failed to demonstrate a benefit, especially in high-risk patients [27]. The lack of efficacy of ITC may be due to the uneven distribution in the neuroaxis as well as the failure of significant penetration to the brain parenchyma as most relapses in the rituximab era are parenchymal rather than leptomeningeal [6]. Systemic high-dose methotrexate produces more equal concentrations in the subarachnoid space and has been shown to be effective in high-risk patients [28]. However, a recent study failed to show a benefit in high-risk patients (defined as high-risk CNS-IPI and double hit) [29], and there is still a debate regarding the optimal schedule and dose to be used [9].

Due to the small number of patients with high CNS-IPI given ITC in our study, we could not conclude on the efficacy of ITC. However, among patients with high CNS-IPI, the relapse rate appears to be high (four out of eight patients developed relapse). Our study has important shortcomings including the retrospective nature, not all patients included could be followed till the date of data collection, and the lack of data on the cell of origin and double hit or double expressor status.

Inclusion of CNS-IPI in the evaluation of all DLBCL for deciding on CNS prophylaxis may help in better selection of patients with high risk for CNS relapse, but it can result in the exposure of many patients to unnecessary treatments. Further studies incorporating different biomarkers including the cell of origin and double hit or expressor subtypes are needed to help in the more proper selection of patients.

© Copyright 2021
Ma'koseh et al. This is an open access article distributed under the terms of the Creative Commons Attribution License CC-BY 4.0., which permits unrestricted use, distribution, and reproduction in any medium, provided the original author and source are credited.

Figure 1: Cumulative incidence of CNS relapse according to CNS-IPI in all patients