A 70-year-old lady with generalized joint aches, stiffness as well as fatigue, was found to have high bone mineral density and alarmingly high fluoride levels. The patient was found to be drinking fluoride containing water from an untreated local well for many years.

Fluorosis results in increased bone mineral density and disease progression correlates with length of exposure. Fluorosis can result in reversible musculocutaneous symptoms and radiological findings. However, severe chronic cases may develop irreversible neurologic manifestations. Urinary fluoride testing is the screening modality of choice, and the key component of management is avoidance of the source of fluoride intoxication as well as monitoring of urinary fluoride levels.

An important acquired osteopetrosis like disease is fluorosis. Osteopetrosis is a rare sclerosing inherited dysplasia of bone [1], which results in an increased tendency towards fractures with minimal effect on bone healing. In all forms of osteopetrosis, the underlying pathophysiology is impaired osteoclastic function resulting in dense, deformed sclerotic bones [2]. The more severe forms tend to occur in infancy and have an autosomal recessive inheritance with an incidence of 1 in 250,000 births. Mild forms are observed in adults and are inherited in an autosomal dominant manner with an incidence of 5 in 100,000 births [3,4]. Diagnosis is largely based on clinical and radiographic evaluation and can be confirmed with genetic testing where applicable. Unlike osteopetrosis, fluorosis is characterized by increased bone formation secondary to chronic fluoride intoxication. Fluorosis presents with a similar clinical and radiological manifestation to osteopetrosis, as discussed in our case. Therefore, distinction between osteopetrosis and fluorosis is imperative.

A 70-year-old female from Ad Dawadmi, a town in the Riyadh province, presented with past medical history of hypertension, dyslipidemia, poorly controlled insulin dependent diabetes mellitus type II for nine years, complicated with non-proliferative diabetic retinopathy as well as diabetic nephropathy. Furthermore, our patient is known to have history of fragility fractures in the right femur 20 years ago followed by right tibia and fibular fractures post open reduction and internal fixation (ORIF) seven years ago after taking alendronate for one year, which was then discontinued and is currently on vitamin D 1000 IU daily.

Our patient first presented to our clinic in 2010 in a wheelchair with complaints of generalized bone pain, more prominent in the back as well as generalized fatigue. Vitals were stable. A thorough history revealed that our patient has been drinking water from an untreated local well for years. Physical examination did not yield any significant findings. Blood fluoride levels were sent immediately and revealed a value of 7.9 mcmol/L (normal value: 0-4). Laboratory results including bone profile and renal workup are provided in Table 1. 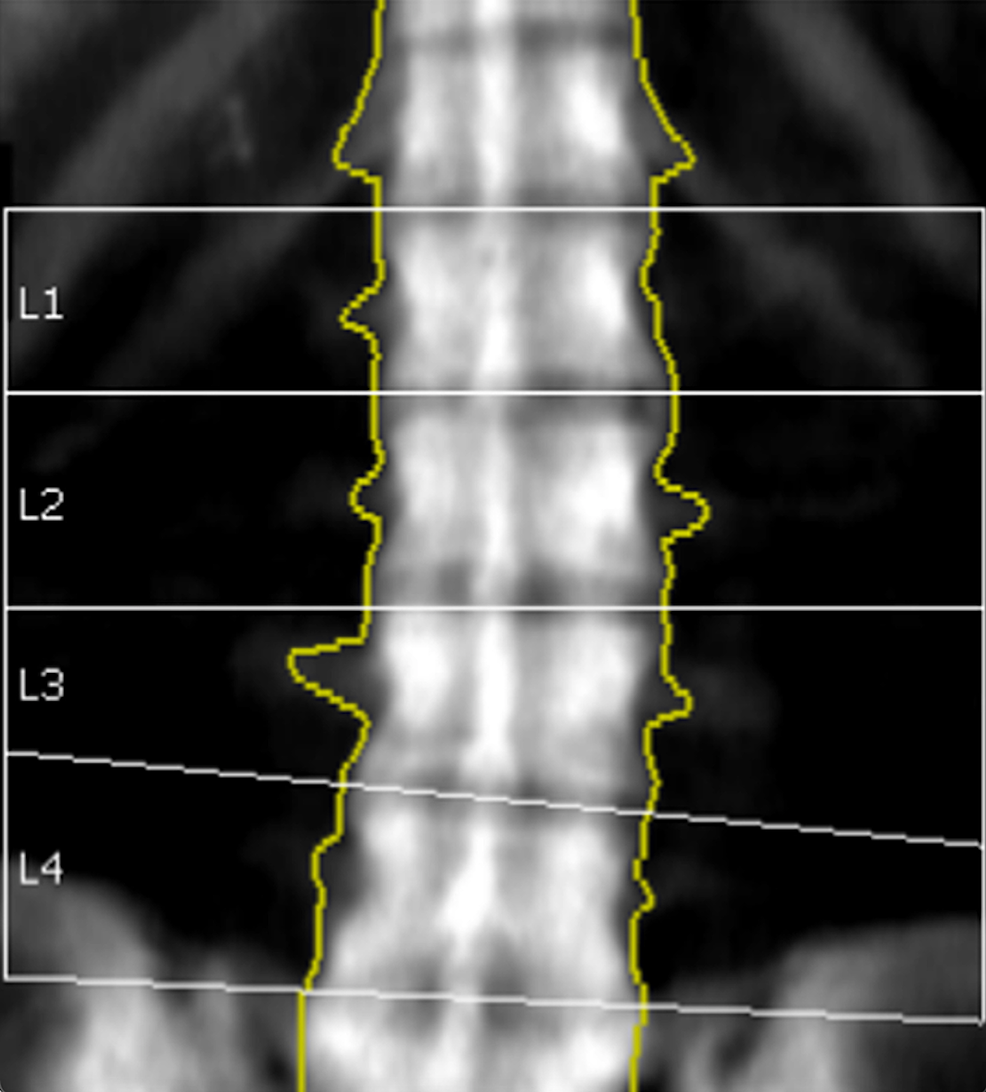 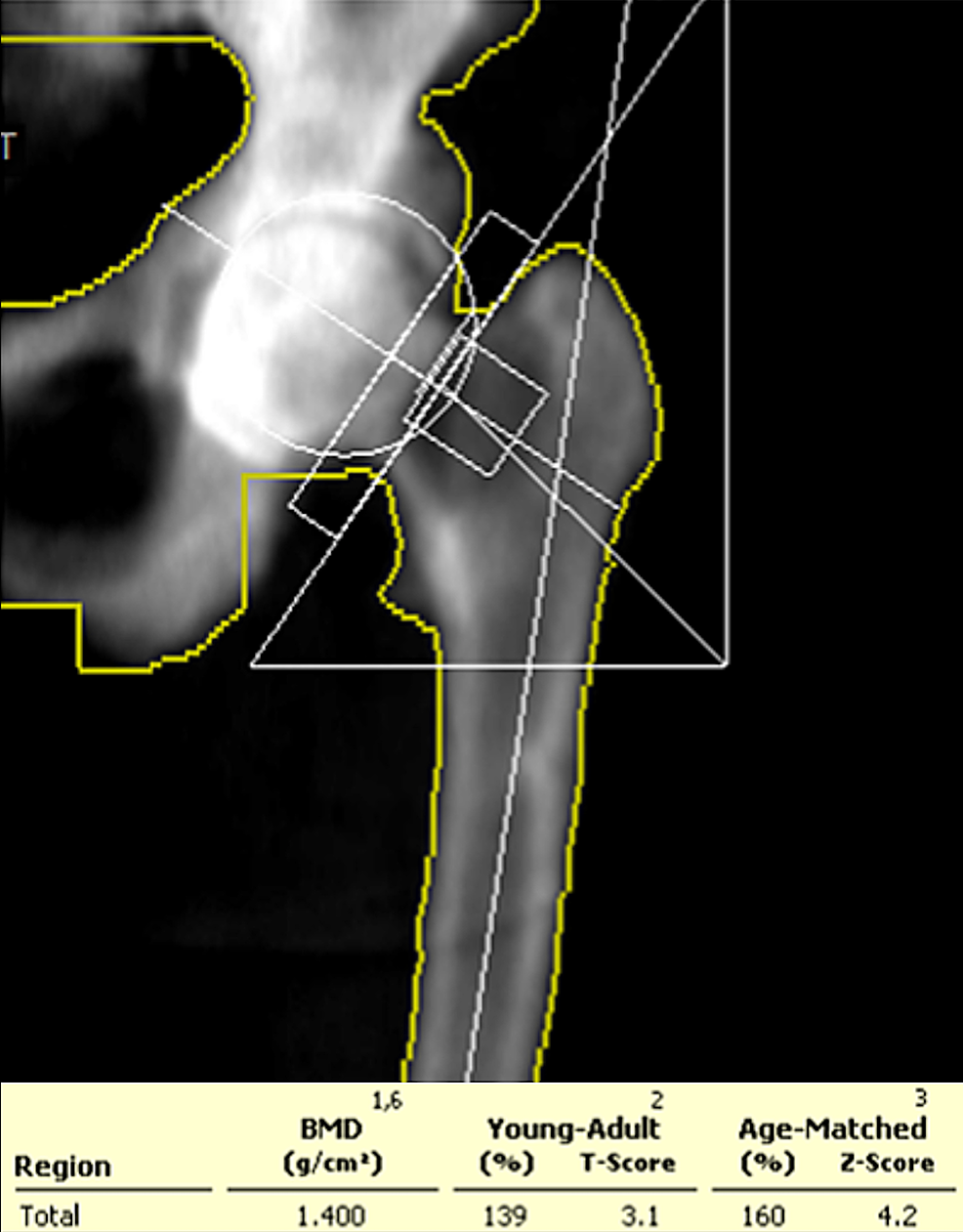 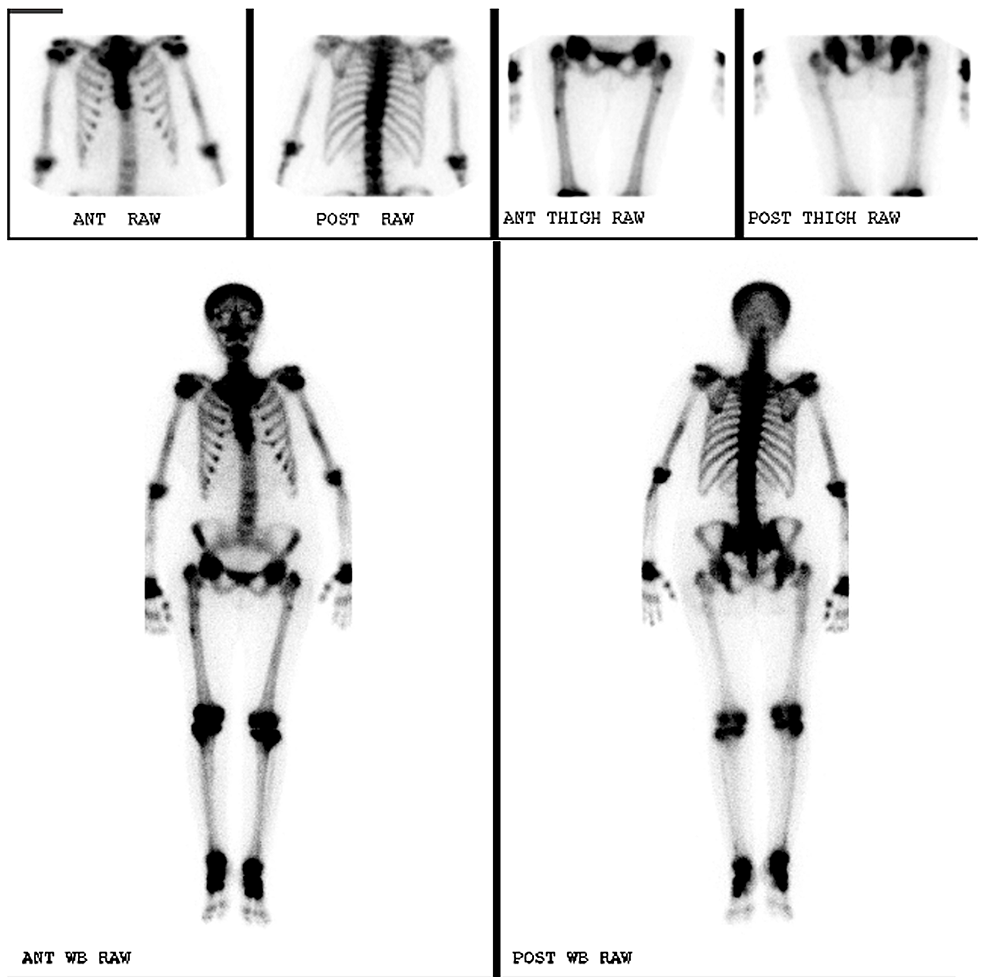 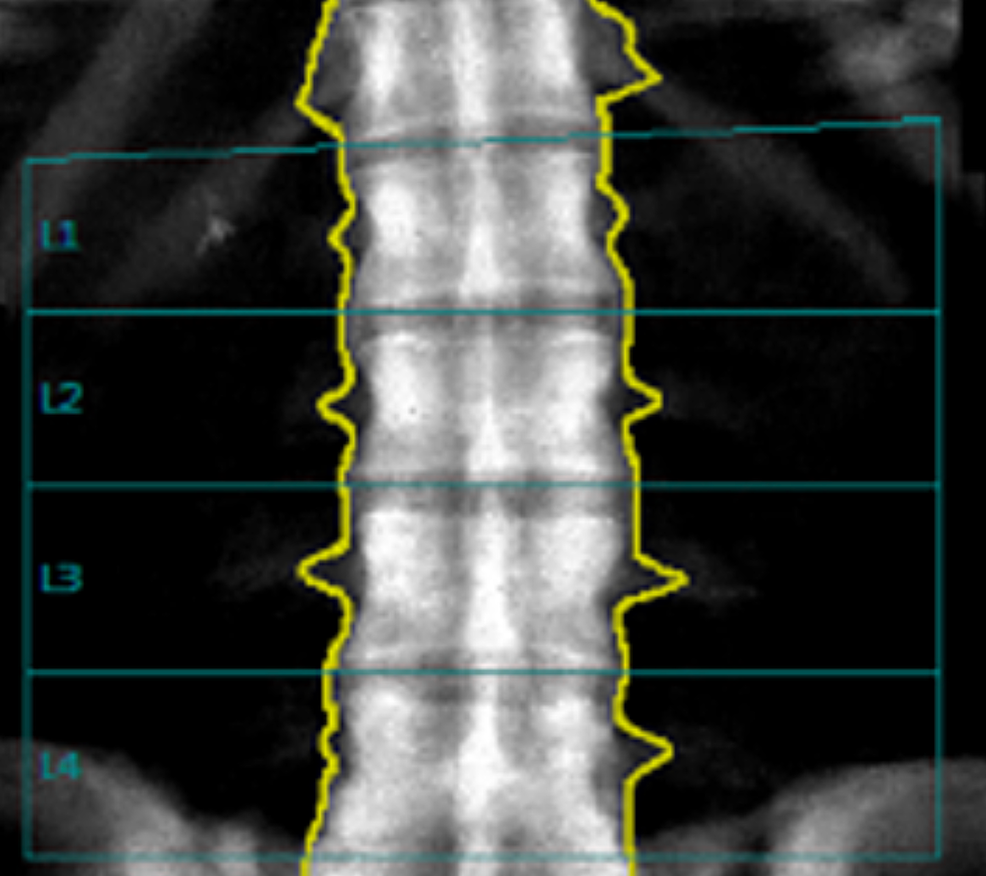 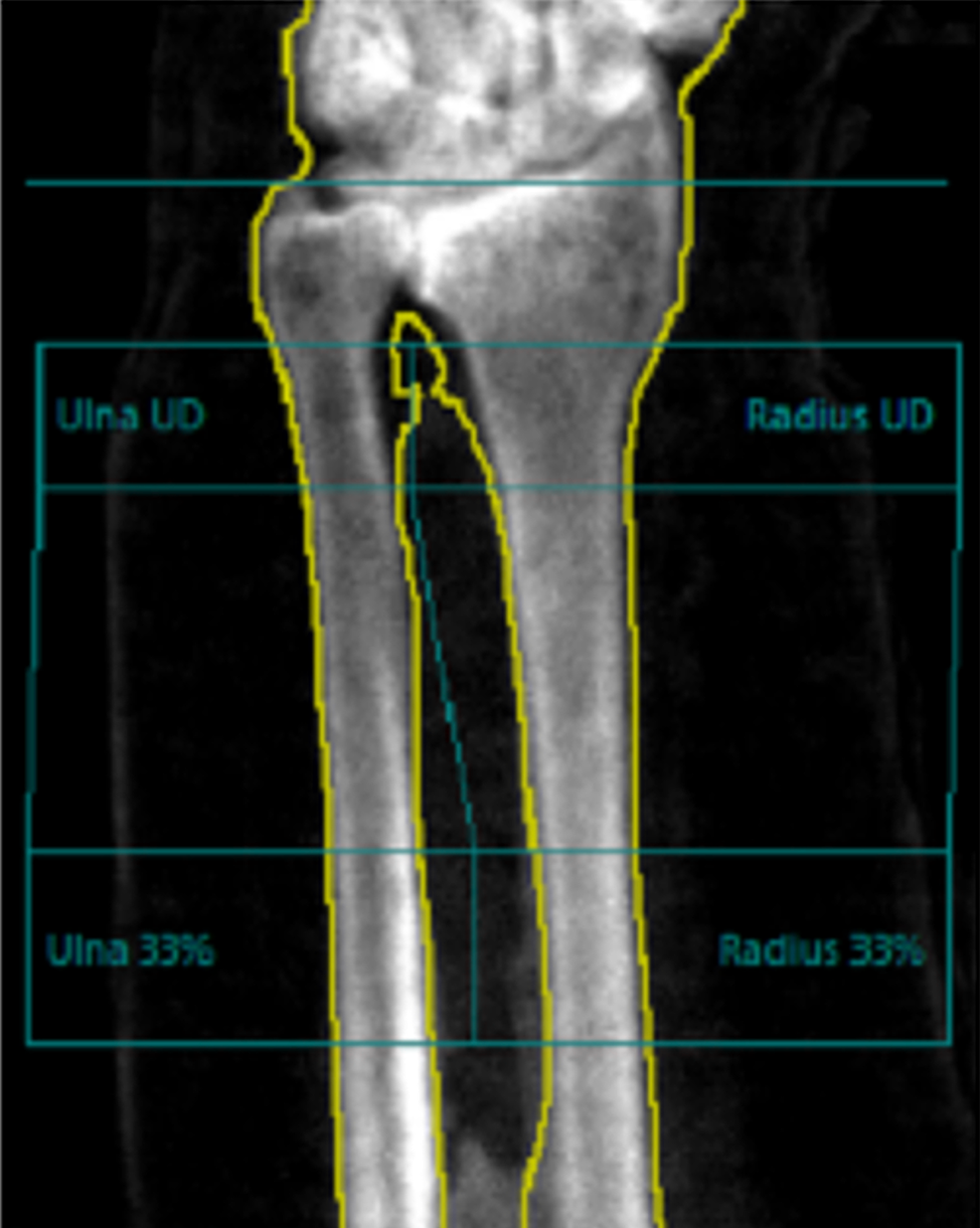 Figure 5: BMD of the Distal Third of the Left Radius.

Table 6: BMD and T-score of the Distal Third of the Left Radius.

The follow-up bone density and T-score results showed a drastic increase in bone density from the initial 2010 bone density scan. Upon re-questioning it was found that our patient was non-compliant with refraining from the consumption of the fluoride containing untreated well water, despite initial management plan and emphasis on its importance. Extensive patient counseling and re-education was put in place to ensure the patient understood that the fluoride contained within the well water is the causative agent to her persistent body aches. It was further explained that the hallmark of treatment revolved around the avoidance of the fluoride containing well water. Furthermore, multiple physicians and family members were involved to ensure appropriate compliance with the management plan as well as compliance with regular outpatient follow-ups for re-assessments and monitoring of disease via fluoride urine measurements.

Osteopetrosis has been known to be a bone disorder associated with an increase in bone mass, similar to fluorosis, a chronic fluoride intoxication, first described in 1932 [5]. Even though both diseases result in increased bone density and less commonly bone fractures, the mechanism by which this occurs helps differentiate the two diseases. Osteopetrosis is due to decreased bone resorption, while fluorosis occurs as a result of increased bone formation. Fluoride acts as a stimulator of osteoblasts, it has been suggested that fluoride can play a therapeutic role in the treatment of low bone density diseases such as osteoporosis for its osteoblastic activity. However, high amounts of fluoride supplementations increase the fracture tendency of bones rather than help maintain its integrity [6, 7]. Fluorosis can be due to fluoride inhalation in occupational exposures such as manufacturing of aluminum, steel, glass and iron [8]; however, it is usually found as a result of increased oral fluoride intake. Levels of >1.4 mg/L have been found to result in classic radiological features of diffuse osteosclerosis with calcification of ligamentous insertion, chalky bone appearance and osteophyte formation. Density of bone correlates with time of exposure to fluoride. Bone changes are most commonly found in the axial skeleton, furthermore, the earliest and most severe radiological changes are seen in the cervical vertebrae as well as the pelvis. Typically, in order for clinical symptoms of fluorosis to manifest, sustained ingestion of fluoride for 10-20 years is required [9]. Symptoms of fluorosis include mainly musculocutaneous involvement, especially in the early course of presentation [10, 11], vague joint aches, stiffness and limited range of motion occurs, followed by kyphosis, flexion contractures of the lower extremities and restricted chest wall expansion in some cases. Lastly, neurologic symptoms may occur, however they are less common and are indicative of advanced disease [12]. The most accurate screening modality for the diagnosis of fluorosis includes a urinary fluoride measurement [13]. Other associated laboratory tests include an increase in alkaline phosphatase. Medical management of fluorosis is centered on the removal of the source of fluoride [8], which has shown reversible outcomes in both skeletal radiological finding as well as symptomatic features despite chronic exposure. However, neurological consequences, if occur, are irreversible. Once the fluoride source is removed, regular monitoring of urine fluoride levels is initiated. It is important to note that fluoride has a half-life of eight years and therefore urinary fluoride levels may remain elevated for years [9].

Adult variants of osteopetrosis and fluorosis have similar symptoms and radiological findings including an increased bone mineral density. However, the underlying pathophysiology of increased bone density distinguishes osteopetrosis from fluorosis. Osteopetrosis is characterized by decreased bone resorption in contrast to fluorosis which is characterized by increased bone formation. Fluorosis can result in reversible musculocutaneous symptoms and radiological findings and disease progression correlates with the length of exposure to fluoride. However, severe chronic cases may develop irreversible neurologic involvement. Urinary fluoride testing is the most accurate screening modality, and the key component of management is the removal of the source of fluoride intoxication as well as monitoring of urinary fluoride levels.

© Copyright 2021
Almakadma et al. This is an open access article distributed under the terms of the Creative Commons Attribution License CC-BY 4.0., which permits unrestricted use, distribution, and reproduction in any medium, provided the original author and source are credited.

Figure 5: BMD of the Distal Third of the Left Radius.

Table 6: BMD and T-score of the Distal Third of the Left Radius.