Spinal canal hematomas have long been recognized as lesions capable of producing sudden spinal cord and/or cauda equina compression [1-19]. Different factors play an important role including ruptured vascular malformations, underlying neoplasm, hypertension, coagulopathies, trauma, pregnancy, old age, infection, and spinal surgery [8, 13-14, 20-22]. It is critical for this to be in the postoperative differential diagnosis of patients who have undergone spinal anesthesia, especially if on anticoagulation therapy.

We present a representative case of an 82-year-old man who underwent a failed attempt at spinal anesthesia for left iliofemoral endarterectomy with patch angioplasty and bilateral common iliac artery iCAST stents (Atrium Medical, Hudson, NH, US) and developed a thoracolumbar subdural hematoma while on anticoagulation postoperatively.

informed consent was obtained from the patient for this study.

The patient is an 82-year-old male with a history of hypertension and peripheral vascular disease with claudication, who underwent a left iliofemoral endarterectomy with patch angioplasty and bilateral common iliac artery iCAST stents. Spinal anesthesia was attempted but failed, and he ultimately required general anesthesia. The surgical procedure was uneventful. In the postoperative period, he was treated with aspirin (81 mg) and Plavix (75 mg), as well as Lovenox for deep vein thrombosis prophylaxis. On postoperative day 1 (POD), he noticed weakness in his bilateral lower extremities while ambulating. On POD 3, he noticed a dense paraparesis, and on POD 4, he was paraplegic. An MRI scan obtained of the thoracic and lumbar spine showed a large epidural hematoma with central canal stenosis extending most prominently from T10-T11 to L1 (Figure 1). 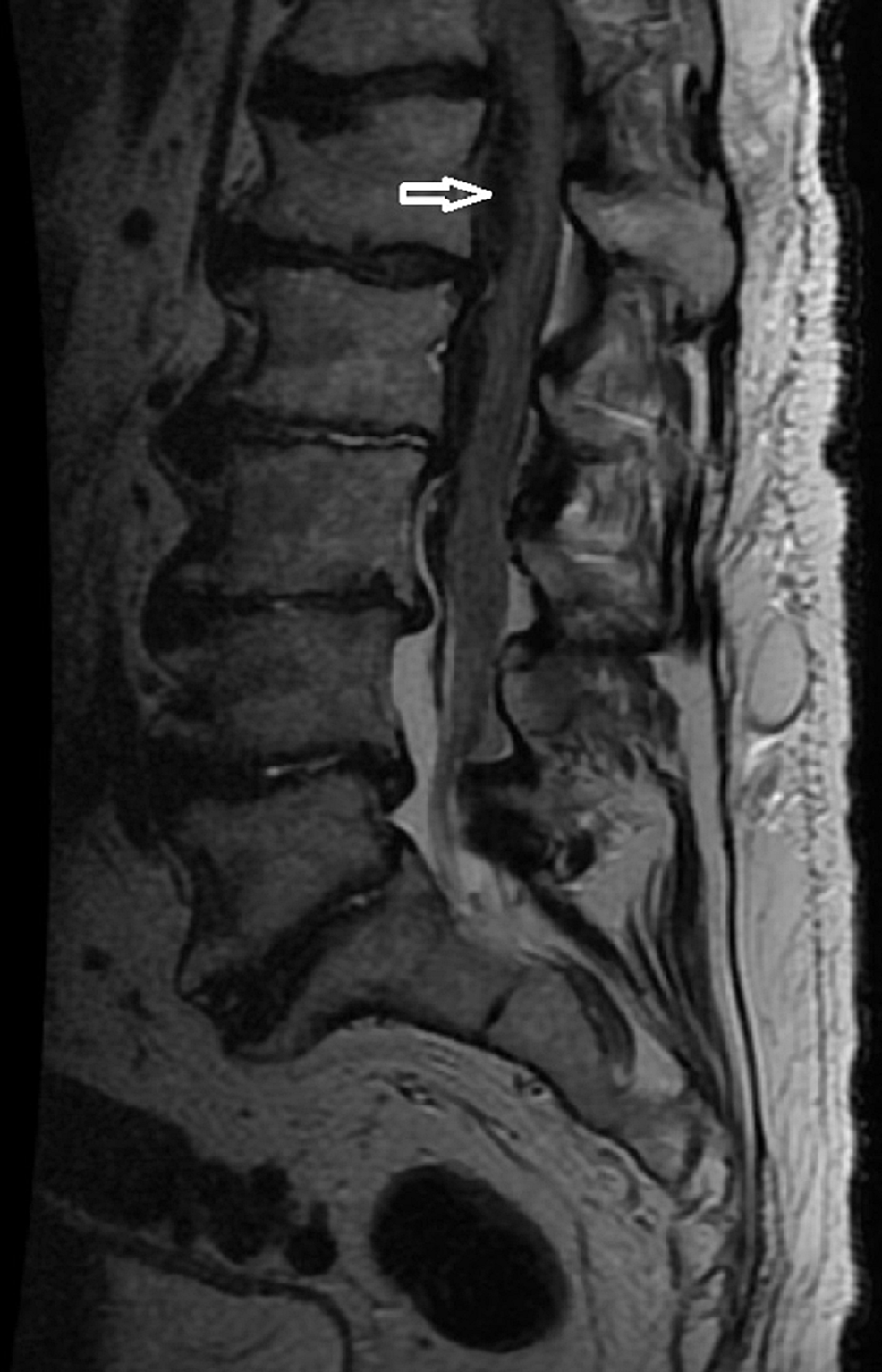 Edema within the cord extends from T10 to the conus as shown in Figures 2-3. 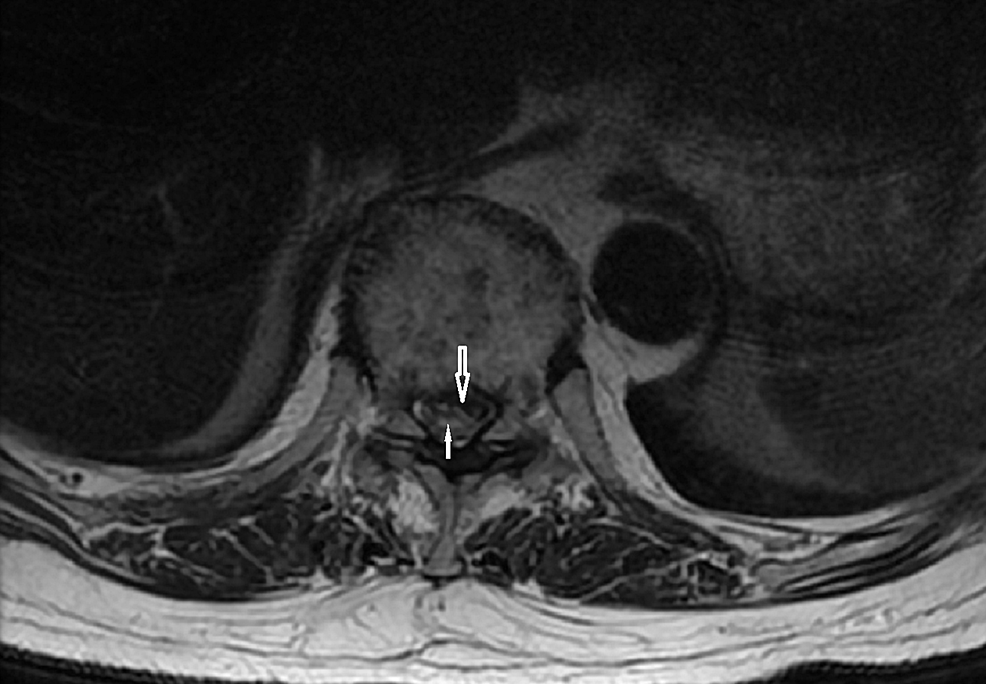 He was emergently transferred to our hospital, and on neurological exam, he was found to have a T10 sensory level and motor exam consistent with 0-1/5 in his right lower extremity and 0/5 in his left lower extremity. He was therefore immediately taken to the operative theater for decompression and evacuation of the hematoma. He underwent a T9-L1 laminectomy; however, when the decompression was completed, we were unable to identify any epidural hematoma. The dura was exceptionally tense, and therefore, an ultrasound was performed that demonstrated that the entire hematoma was intradural. The dura was opened the entire length of the laminectomy and an acute hematoma under high pressure erupted. The hematoma was irrigated out with good decompression of the neural elements, and the dura was completely relaxed after closure. Unfortunately, postoperatively, the patient never regained lower extremity motor function and went to a skilled nursing facility.

Anticoagulant therapy, especially in combination with spinal punctures or epidural anesthesia, has been regarded as an important predisposing factor for spinal epidural hematoma [2, 6, 14, 23-25]. In fact, anticoagulation initiated within one hour after a traumatic lumbar puncture and clotting studies greater than two times normal have been reported to increase the risk of bleeding [14, 23-25]. Spinal hematomas, however, have also been described as occurring spontaneously or after only minor activities such as sneezing or coughing [13, 20-22, 26-29]. Although usually acute (occurring within the first 48 hours of the event), some spinal hematomas have been identified as causes of chronic myelopathy [7, 21-22, 29, 30]. Because they rarely spontaneously remit, and because of their great propensity for causing severe irreversible neurologic deficits, immediate surgical evacuation of these compressive lesions is strongly advocated [1, 9, 13, 15, 17].

Most commonly, spinal hematoma is seen in the epidural space and rarely seen in the subdural space or subarachnoid space; these hematomas can cause neural compression comparable or worse to that of an epidural hematoma [1-8, 24, 28, 31-32]. The correct preoperative diagnostic location of the hematoma informs the surgeon of the need to open the dura or arachnoid to locate the hematoma, particularly in cases complicated by the coexistence of epidural and subdural hematomas. As we learned from our case, it is the better part of valor to always check with an ultrasound to confirm that there is no subdural component of the hematoma, especially when an epidural hematoma is not visualized.

The mechanism of hematoma formation in the spinal subdural space remains open to conjecture. However, an electron microscopy study by Haines, et al. recently offered explanations for subdural hematoma occurrence in the brain, which also seem plausible for the spine [33].  According to these authors, the dura is composed externally of elongated flattened fibroblasts and large amounts of extracellular collagen; internally, it is made up of flattened fibroblasts and extracellular spaces containing no extracellular collagen, with few cell junctions. While the external layer of dura is strong, the inner dura or meningeal dura, also known as the dural border cell layer, is structurally weak and vulnerable to tearing open from injury. The adjacent arachnoid layer bears resemblance to the external dura in that it is also a strong barrier, being composed of larger cells with many cell junctions, no extracellular collagen, and no extracellular space. The numerous tight junctions in this layer prevent the free movement of fluids and ions. This arachnoid layer is further strengthened by the fact that arachnoid trabeculae formed from specialized fibroblasts attached to the inner arachnoid layer traverse the subarachnoid space and attach to the pia. Under these anatomic conditions, no potential space exists at the dura-arachnoid junction in the brain. Rather, the dural border cell layer, which is the structurally weakest point in the meninges, cleaves open when traumatic or other pathologic forces cause tissue injury. The space that is created in this fashion is actually within this distinct dural border cell layer as opposed to being in an anatomic subdural space. Based on these anatomical observations, spinal hematomas can be classified as inner dural or true subdural type. According to Haines, et al., it is not difficult to imagine that in patients with preexisting coagulopathy, this layer is more prone to rupture especially after the trauma of an attempted spinal anesthesia has occurred [33].

Thoracolumbar spinal canal hematomas have long been known as lesions that are capable of producing sudden spinal cord and/or cauda equina compression. It is important to consider spinal subdural hematoma in patients undergoing spinal anesthesia who develop neurological deficits, especially when there is anticoagulation on board. When evacuating the hematoma, it is critical to check both the epidural and subdural space using an ultrasound.

© Copyright 2017
Maddali et al. This is an open access article distributed under the terms of the Creative Commons Attribution License CC-BY 3.0., which permits unrestricted use, distribution, and reproduction in any medium, provided the original author and source are credited.