A 32-year-old man presented with agitation, headache, and confusion. He was immunocompetent and had been living with multiple cats for many years. His vital signs were stable. He was afebrile. Multiple blood tests did not show any serious problem. Brain magnetic resonance imaging (MRI) revealed multiple ring-enhancing white matter lesions. Cerebrospinal fluid analysis did not show any signs of infection. Based on a presumptive diagnosis of multiple sclerosis, high-dose corticosteroid treatment was started. However, this caused worsening of the symptoms and increased the size of the lesions. Corticosteroids were discontinued and biopsy was done. Biopsy of the lesions confirmed Toxoplasma gondii infection, and treatment with pyrimethamine/sulfadiazine was initiated. Treatment decreased the size of the lesions dramatically.

Cognitive impairment in a young man is a challenging presentation that needs rapid evaluation. Toxoplasmosis is an infection caused by an intracellular protozoan parasite, Toxoplasma gondii [1]. The complete reproductive cycle occurs only in felines. There are various modes of transmission: ingestion of infectious oocysts from soil contaminated with cat feces, ingestion of tissue cysts from the meat of an infected animal, vertical transmission, blood transfusion, and organ transplant [1].

Toxoplasmosis is most commonly reported in immunocompromised states such as human immunodeficiency virus (HIV) infection, chemotherapy, and bone marrow transplant. There are a few case reports in immunocompetent patients [2-4]. We report a case of severe central nervous system (CNS) Toxoplasma infection in an immunocompetent host who lives with multiple cats.

A previously healthy 32-year-old white man presented with gradually increasing agitation and confusion. His friends mentioned that he displayed personality changes recently and was more combative and forgetful. The patient was complaining of severe recurrent headaches that started a few months ago and were not accompanied by nausea or vomiting. He had a history of alcohol, tobacco, cocaine, and methamphetamine use for many years. There was no history of seizures, loss of consciousness, syncope, fever, rash, weakness, or involuntary movements. The patient also denied recent travel, camping, and contact with sick persons. There was no family history of neurologic disorders or CNS tumors. The patient was living alone with multiple cats for a long time (four cats for six years). 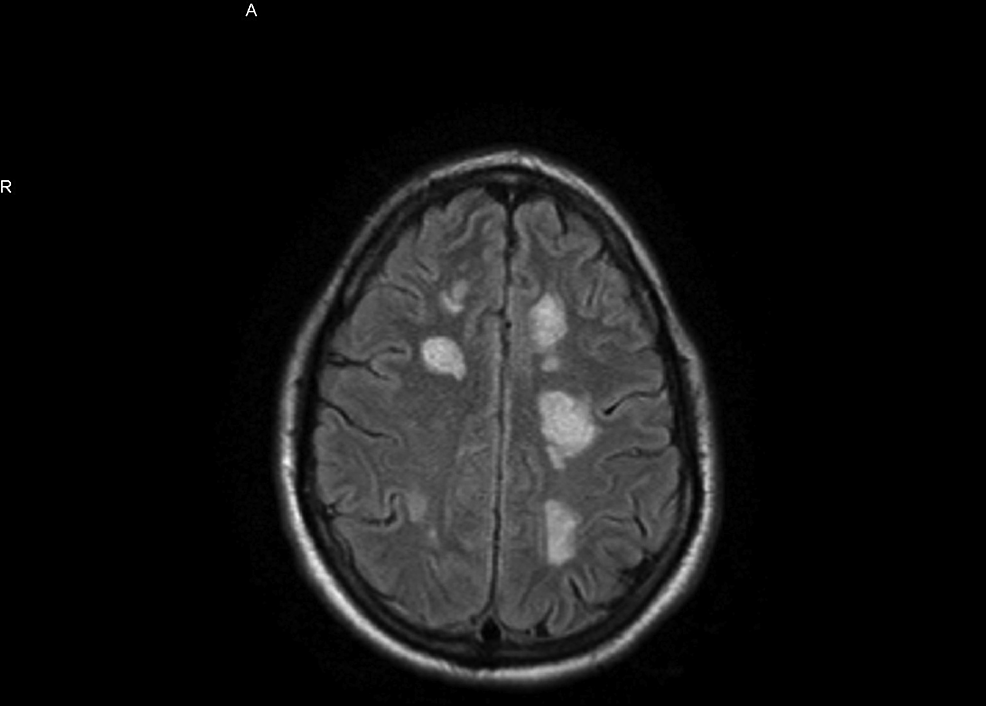 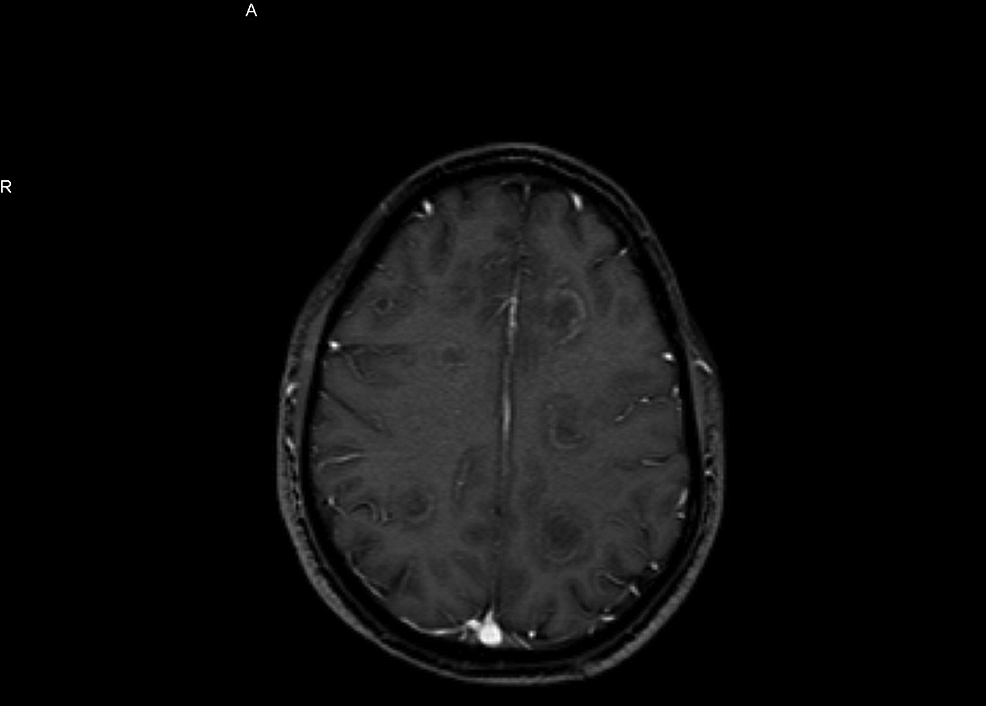 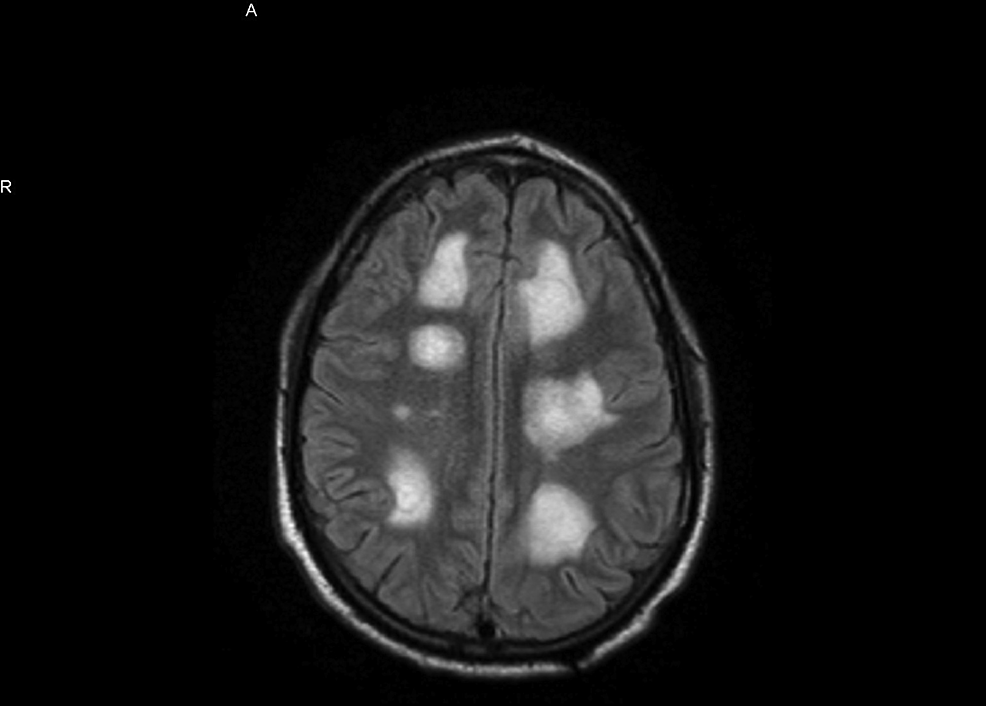 Figure 3: MRI with contrast after corticosteroid treatment shows increased size of the lesions. 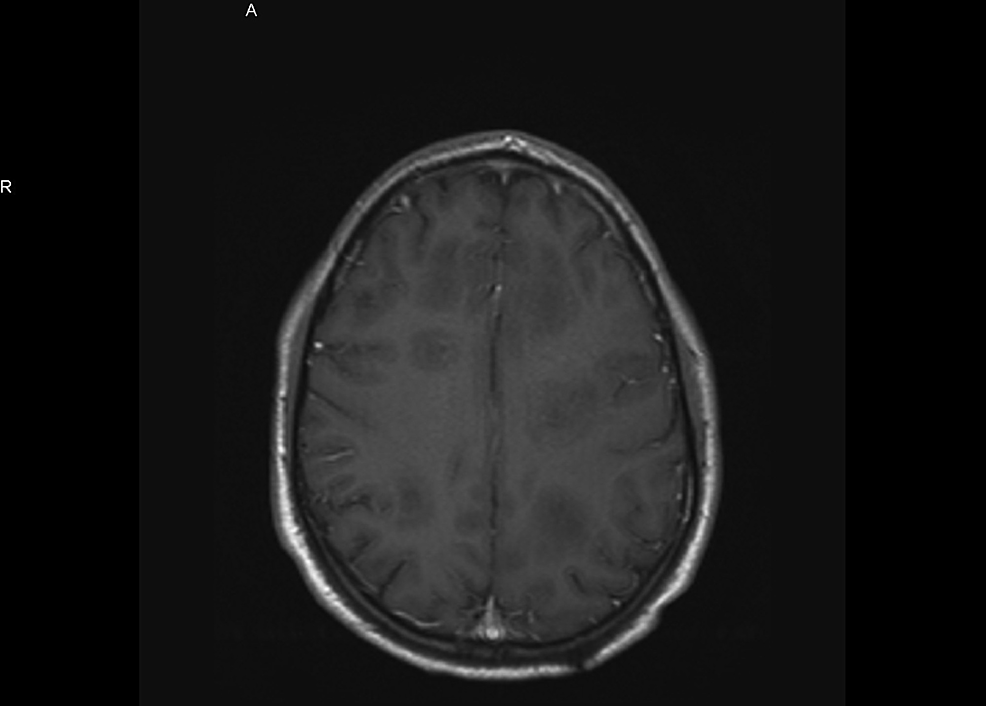 Figure 4: MRI without contrast after corticosteroid treatment shows increased size of the lesions.

A stereotactic brain biopsy was done, and CNS toxoplasmosis was reported after biopsy and polymerase chain reaction analysis (Figures 5-6). 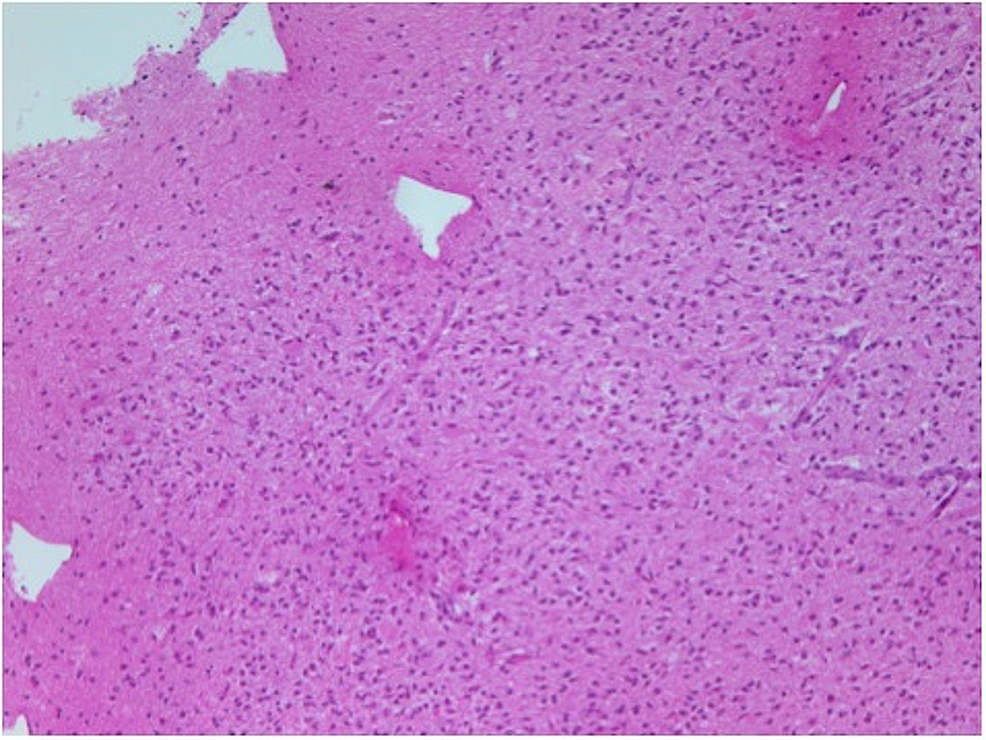 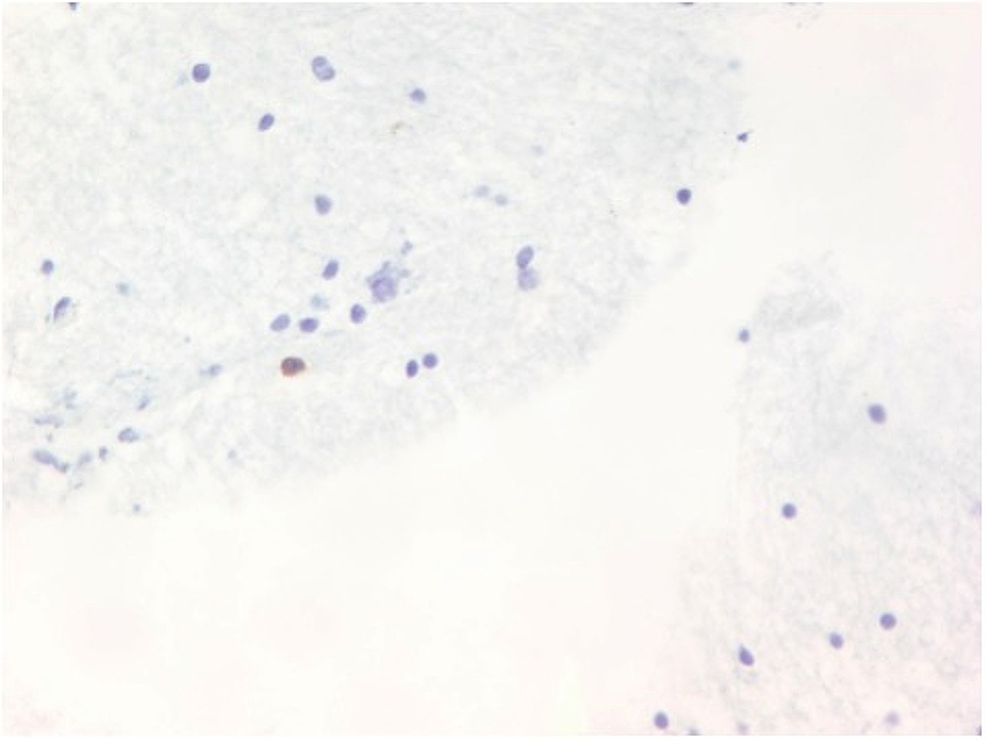 Blue lesions across the specimen as seen in the picture

Pyrimethamine 200 mg loading dose, followed by 75 mg daily, sulfadiazine 1.5 g four times daily, and leucovorin 25 mg daily were started and continued for a total of eight weeks. The patient had significant clinical improvement associated with dramatic decrease in number and size of the lesions on follow-up brain imaging within one month (Figures 7-8) 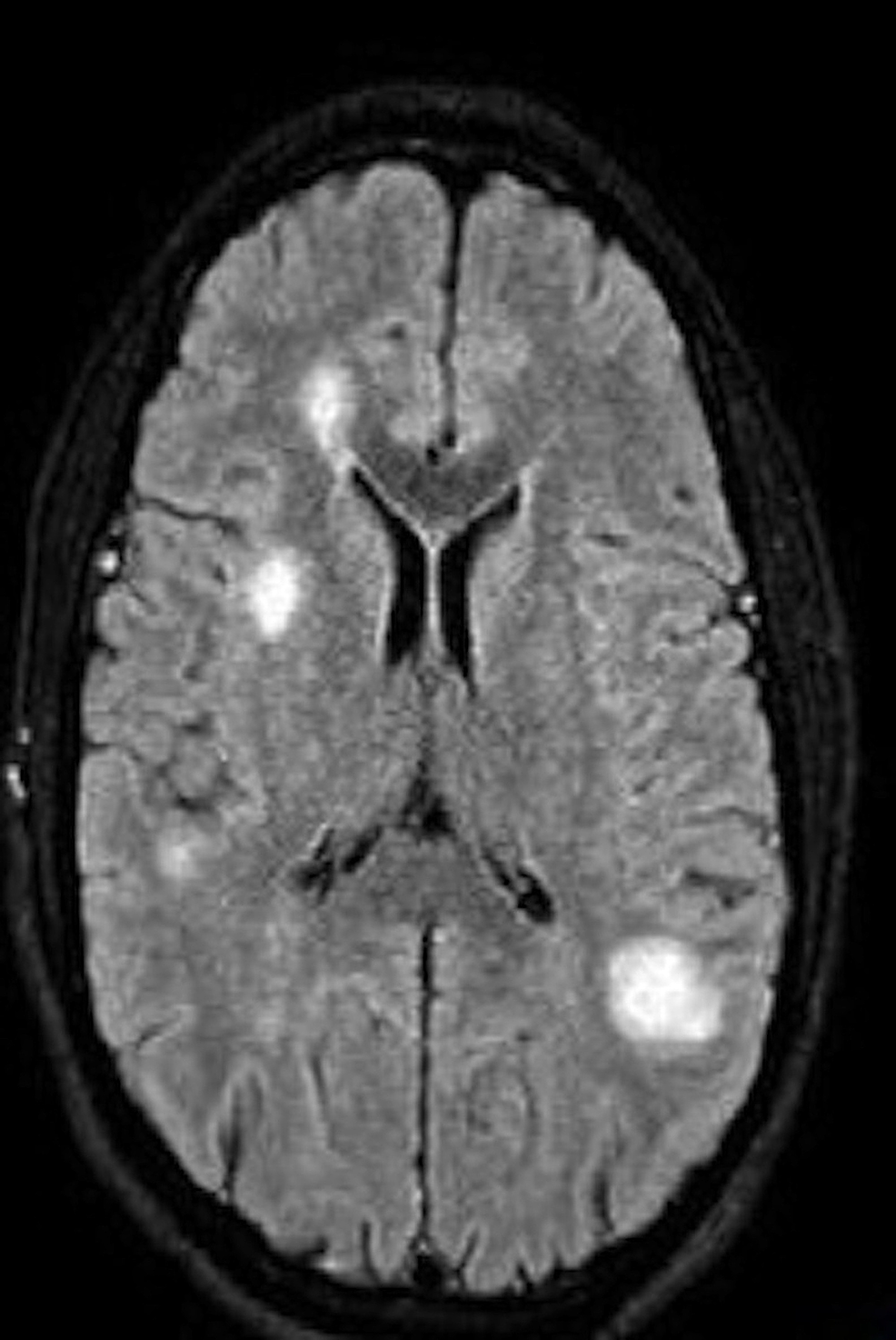 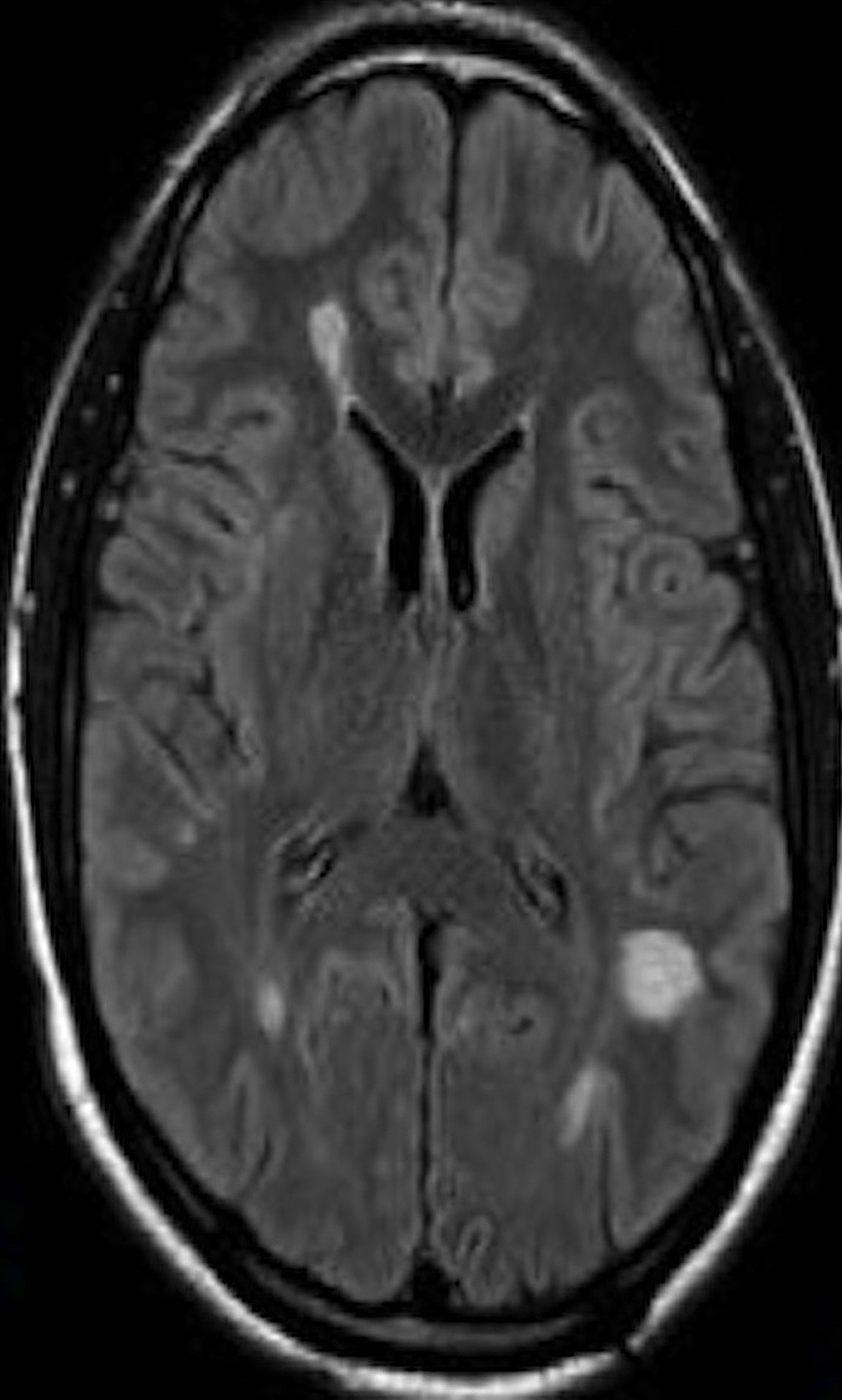 The patient was followed up every three months with serial brain imaging. Dramatic clinical improvement was noticed in memory, concentration, and other neurologic findings, eventually returning to his normal baseline cognitive status.

This was a rare clinical presentation of widespread concentric white matter lesions in a young immunocompetent drug abuser with daily contact with cats. The differential diagnosis of ring-enhancing lesions is broad (Table 1).

Table 1: The differential diagnosis of ring-enhancing lesions in white matter

At the initial presentation, there was a concern for demyelinating disorders. Absence of significant neurologic deficits, absence of markers for demyelinating disease and worsening symptoms and radiologic findings with high-dose corticosteroid therapy argue against a diagnosis of demyelinating disorder. Oligoclonal bands and CSF protein are nonspecific signs of multiple sclerosis and could signify inflammation. Improvement of the lesions with pyrimethamine/sulfadiazine makes CNS toxoplasmosis more likely.

Most commonly, Toxoplasma infection causes painless cervical lymphadenopathy [5]. The clinical manifestations of acquired toxoplasmosis in immunocompetent individuals have been reported to rarely include localized neurologic signs; in contrast, such signs are frequent in immunosuppressed patients [6-8].

Toxoplasmosis generally does not need treatment in immunocompetent, nonpregnant patients unless their symptoms are severe or prolonged. In that case, the same medications are used as for immunosuppressed patients, but lower doses are sufficient. The usual duration of treatment is two to four weeks. In our case, we decided to treat at higher doses and for a longer period due to the severity of symptoms and radiologic findings. First-line regimens include pyrimethamine with sulfadiazine. Folinic acid supplements should be given to all patients receiving pyrimethamine. Alternative regimens include pyrimethamine combined with clindamycin azithromycin or atovaquone. Trimethoprim/sulfamethoxazole is an effective alternative treatment option.

This case highlights the importance of considering infections of the CNS when investigating space-occupying lesions. The general conception is that CNS toxoplasmosis is seen in patients who have HIV or are otherwise immunocompromised. However, there are a few case reports involving patients who are not immunocompromised. A recent review showed a possible causal relationship between postnatal toxoplasmosis and epilepsy [10]. Biopsy with PCR is essential for the diagnosis. In our case, CSF antibody testing for Toxoplasma infection was negative but biopsy and PCR confirmed the diagnosis of toxoplasmosis. Evidence of a negative Toxoplasma IgM and a positive IgG implicates reactivation of Toxoplasmosis likely from prolonged exposure to felines. Exacerbation of symptoms and increasing size of the lesions after systemic corticosteroid therapy should increase the suspicion for an infectious cause. We believe that close contact with multiple cats increases the risk of CNS toxoplasmosis in immunocompetent individuals.

Department of Rheumatology, University of Nebraska

© Copyright 2017
Akturk et al. This is an open access article distributed under the terms of the Creative Commons Attribution License CC-BY 3.0., which permits unrestricted use, distribution, and reproduction in any medium, provided the original author and source are credited.

Figure 3: MRI with contrast after corticosteroid treatment shows increased size of the lesions.

Figure 4: MRI without contrast after corticosteroid treatment shows increased size of the lesions.

Blue lesions across the specimen as seen in the picture

Table 1: The differential diagnosis of ring-enhancing lesions in white matter