In the United States, 105,890 cases of gynecologic malignancies will be diagnosed, and 30,890 patients will die in 2016 [1]. Gynecological cancers are an infrequent (< 1%) cause of brain metastases and less than 3% of patients with gynecologic malignancies are diagnosed with central nervous system metastases [2]. Unfortunately, patients who develop brain metastases have a poor prognosis overall and require central nervous system control to improve their quality of life and ability to function [4]. Given the relative inability of systemic therapy to penetrate the blood-brain barrier, radiation therapy and surgical resection play vital roles in the management of brain metastases [3-4].

This research study was approved by the Institutional Review Board (IRB) of Florida Hospital, approval #907433-1. We performed a retrospective analysis of an IRB approved database of patients treated with Gamma Knife radiosurgery between June 1996 and May 2016 at our institution. Female patients who were specifically treated for brain metastases and who had an established diagnosis of gynecological malignancy were selected for study inclusion. Patient characteristics collected included Karnofsky performance status, extracranial disease status, tumor histology, history of whole brain radiation therapy, history of craniotomy, date of death or last clinical contact, and age at initial stereotactic radiosurgery (SRS) treatment. Treatment characteristics were obtained from the treatment plans, including tumor volume, matrix volume, prescription dose, prescription isodose, coverage, selectivity, and gradient index.

The brain tumor was visualized on the planning MRI with gadolinium or CT with contrast, and treatment was planned through the use of GammaPlan (Elekta AB, Stockholm, Sweden). Dose selection was based on published Radiation Therapy Oncology Group (RTOG) guidelines, with possible dose modification based on treating physician preference, tumor location, and the number of lesions [12]. All visible metastatic brain disease was treated during each Gamma Knife session. Patients were treated with the Leksell Gamma Knife model U from 1996-2005, the Leksell Gamma Knife model 4C from 2005-2013, and the Leksell Gamma Knife Perfexion™ (Elekta AB, Stockholm, Sweden) from 2013-2016. Head frame placement was done by the treating neurosurgeon with subsequent removal of the frame by either the treating radiation oncologist or neurosurgeon.

Patients were typically followed with serial imaging of the brain following treatment every three to six months during the first year, followed by every six months in subsequent years to assess for tumor progression. The date of each SRS session, location of the brain metastasis treated, and greatest axial dimension on the planning MRI or CT at the time of treatment were recorded. Post-radiosurgery imaging was reviewed to identify all brain metastases and to measure the size of the lesion as the greatest axial diameter. Out of the 73 treated brain metastases, 50 had at least one follow-up study available within our institution’s medical records. Thus, the other 23 metastases without follow-up imaging were excluded from brain control analysis.

Statistical analyses were performed using the Statistical Package for Social Sciences (SPSS), version 23 (IBM SPSS Statistics, Armonk, NY). Descriptive statistics were used to summarize the cohort. The overall survival, local brain control, and distant brain control rates were calculated from the date of the first Gamma Knife treatment session to the date of death or progression via the Kaplan-Meier (KM) method. Univariate analysis was performed using the log-rank test to assess outcome measures. Due to the sample size limitations, a multivariate analysis was not performed. A two-tailed p-value ≤ 0.05 was considered to be statistically significant. No adjustments were made for multiple tests.

We identified 73 metastatic brain lesions treated in 33 patients. Sixty-eight metastases (93%) were intact and five (7%) were postoperative cavities. The clinical characteristics of the 33 patients are outlined in Table 1. The median patient age was 58.5 years (range: 32-93). All patients had been diagnosed with a gynecological malignancy by histology. Seventeen patients (52%) had extracranial metastases. Eleven patients (33%) had progressive systemic disease. All patients underwent Gamma Knife-based SRS. Ten patients (30%) received previous whole brain radiotherapy (greater than three months prior to SRS) and 11 patients (33%) received concurrent whole brain radiotherapy (within three months of SRS session). The median radiation dose to each tumor was 20 Gy (range: 14 - 24 Gy) (Table 2) treated to the 50% isodose line. The median tumor volume was 0.96 cm3 (range: 0.01 – 16.97 cm3). At the time of initial treatment, 39% of patients were categorized as RPA Class I, 55% as RPA Class II, and 6% as RPA Class III.

Table 1: Summary of Characteristics in 33 Patients with Gynecological Brain Metastases

The median radiographic follow-up was 11 months (range: 1–28 months). The rate of local brain failure as defined was 8%. Kaplan-Meier local control (LC) estimates at six and 12 months were 95.1% and 84.3%, respectively (Figure 1). Results of univariate analysis (UVA) of LC and distant brain control (DBC) are displayed in Table 3. A dose of greater than 20 Gy was found to statistically correlate with the likelihood of increased lesion volume on serial imaging (p = 0.04). Figure 2 provides an example of increased lesion size on imaging seen in a metastasis receiving > 20 Gy, which appears radiographically consistent with radiation necrosis. No other factors appeared to have a statistically significant effect on local control on UVA. No factors appeared to have a statistically significant effect on DBC on UVA.

Five patients (15%) were noted to have failure in the brain at a site remote to the GK, with a median time to failure of seven months (range: 3–9 months). Three patients (8%) with distant failures received additional Gamma Knife-based SRS. Kaplan-Meier estimates for DBC at six and 12 months were 87.5% and 65.8%, respectively (Figure 1). 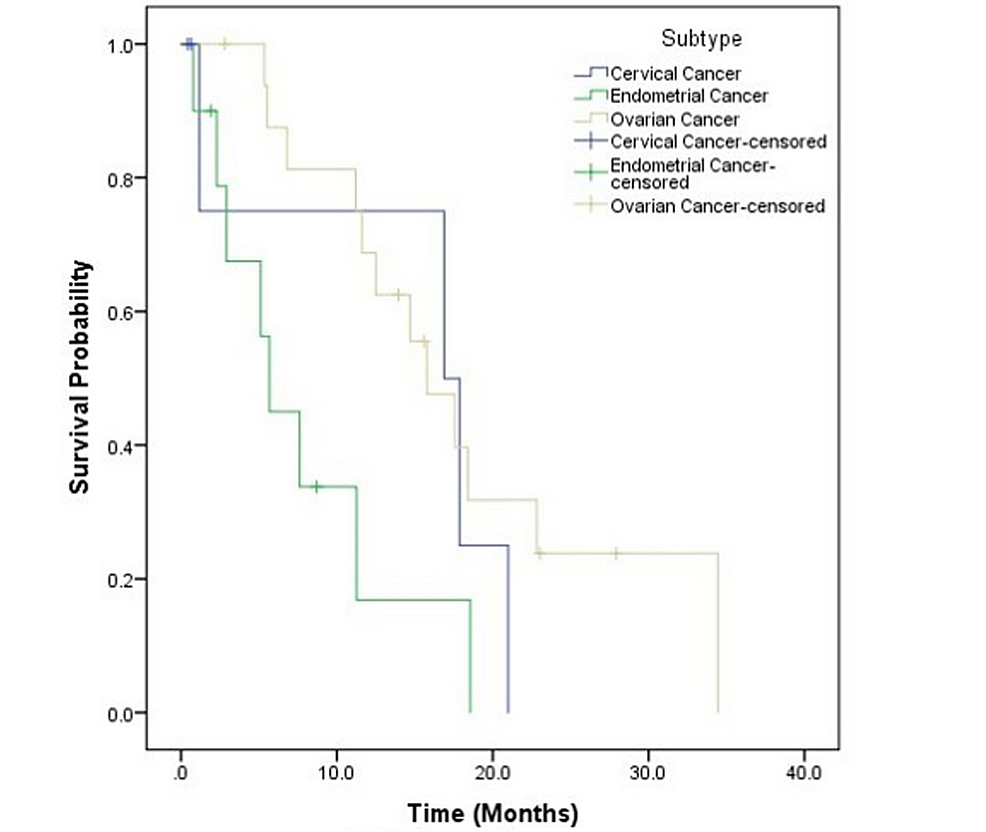 Figure 3: Survival Based on Subtype

Radiation necrosis was confirmed via biopsy following surgical resection in two patients (6%). There were no other observed cases of RTOG Grade 3 or higher toxicity following treatment.

A significant predictor of local control was the prescription dose. We noted that a dose of more than 20 Gy was found to statistically correlate with the likelihood of increased lesion volume on serial imaging (p = 0.04), likely due to radiation necrosis. Two of the patients who received doses of 24 Gy and experienced progression based on our criteria had pathologically proven radiation necrosis. The remaining incidences of progression were not biopsied but radiographically were consistent with necrosis (Figure 2).

Our KM estimates of median overall survival were 21 and 15 months from the date of brain metastases diagnosis and the date of SRS, respectively, consistent with similar series, as shown in Table 4. Additionally, our KM OS estimates were similar to other studies that reported overall survival between 34.7% and 73.9% at six months and between 13% and 43.8% at 12 months after initial SRS [9, 11, 19-20]. Our favorable results may be in part due to the aggressive use of surgery, radiation therapy, and systemic therapy as indicated as part of our multidisciplinary treatment approach for these patients.

Table 4: Radiosurgery for Gynecological Brain Metastases in Greater than 15 Patients

Limitations of our study include the lack of available cause of death data, as well as a lack of analysis on the various chemotherapeutic agents that may have been employed in the treatment of each individual patient. Studies with larger sample sizes are needed to further elucidate the significance of primary histology on brain control and OS and to further confirm our overall findings. Additionally, our study has the inherent limitations of any retrospective study.

However, due to the limited data currently available, this study importantly supports the use of Gamma Knife radiosurgery for the treatment of patients with gynecological malignancies in one of the larger cohort of patients reported to date.

In summary, this study provides retrospective outcomes from a single institution utilizing Gamma Knife radiosurgery in the treatment of brain metastases from gynecological malignancies. We were able to achieve excellent local control rates with acceptable rates of toxicity.

© Copyright 2016
Keller et al. This is an open access article distributed under the terms of the Creative Commons Attribution License CC-BY 3.0., which permits unrestricted use, distribution, and reproduction in any medium, provided the original author and source are credited.

Figure 3: Survival Based on Subtype

Table 1: Summary of Characteristics in 33 Patients with Gynecological Brain Metastases

Table 4: Radiosurgery for Gynecological Brain Metastases in Greater than 15 Patients