Checkpoint inhibitors (CPI) have become mainstream in standard therapy in various tumors, especially in malignant melanoma. Despite their widespread beneficial effects, these inhibitors are also notorious for immune-related adverse events (irAEs). Hemophagocytic lymphohistiocytosis (HLH) is an aggressive and life-threatening syndrome of excessive immune activation. We report a case of a 33-year-old male having a history of metastatic melanoma on immunotherapy (status post two cycles of ipilimumab/nivolumab) admitted for persistent fever and elevated liver enzymes. Additional work showed anemia, thrombocytopenia, hypertriglyceridemia, and hyperferritinemia which meet the diagnostic criteria of histiocyte society HLH-2004. The patient was effectively treated with oral prednisone. Moreover, further complications encompassed slurred speech, word-finding difficulties, ataxia, and lower extremity hyperreflexia concerning for autoimmune encephalitis. He was treated with high-dose IV methylprednisolone (1 gram/day for 3 days) with improvement in symptoms. Autoimmune encephalitis associated with HLH can be fatal - high-dose IV methylprednisolone should be considered, but this avenue still needs to be explored.

Immune checkpoint inhibitors (ICI), such as anti-programmed death-1 (PD-1) and anti-cytotoxic T-lymphocyte-associated antigen 4 (CTLA-4) antibodies, have shown widespread effectiveness in treating many cancers particularly malignant melanoma. On the downside, ICI therapy is associated with immune-related adverse events (irAEs) including pneumonitis, hepatitis, colitis, and endocrinopathies such as adrenal insufficiency, thyroid dysfunction, hypopituitarism, and type 1 diabetes mellitus [1]. However new and rare irAEs, including hematologic toxicities, are still an understudied territory, particularly in the case of dual ICI therapy. Management of hematologic irAEs such as thrombotic thrombocytopenic purpura/hemolytic uremic syndrome, aplastic anemia, autoimmune hemolytic anemia, and immune thrombocytopenia have been elaborated in recent literature [2]. Many case reports have been published lately describing hemophagocytic lymphohistiocytosis (HLH) in solid tumors secondary to ICI [3-9]. This case report is about a new finding of HLH associated encephalitis in a malignant melanoma patient treated with nivolumab/ipilimumab.

A 33-year-old male having a history of malignant melanoma with metastatic disease to the bones on immunotherapy (status post 2 cycles of ipilimumab/nivolumab) admitted from the emergency department for persistent fever and elevated liver enzymes. The patient reported daily fever as high as 103.5° F (taken orally) for four days associated with two episodes of non-bloody emesis the day before admission. He had overall poor appetite but no abdominal pain or diarrhea. Headaches occurred only with fever. He denied any body aches, neck stiffness, photophobia. The patient was seen in urgent care three days ago with both negative rapid influenza and COVID-19 test along with no acute findings on chest X-ray. He was also seen in another hospital three days ago for the same symptoms, had blood cultures drawn, and discharged home on oral antibiotics. On physical examination, the patient had a temperature of 103° F, pulse 88 bpm, BP 134/81 mmHg, and oxygen saturation 96%. Respiratory, gastrointestinal, and neurological examinations were normal. 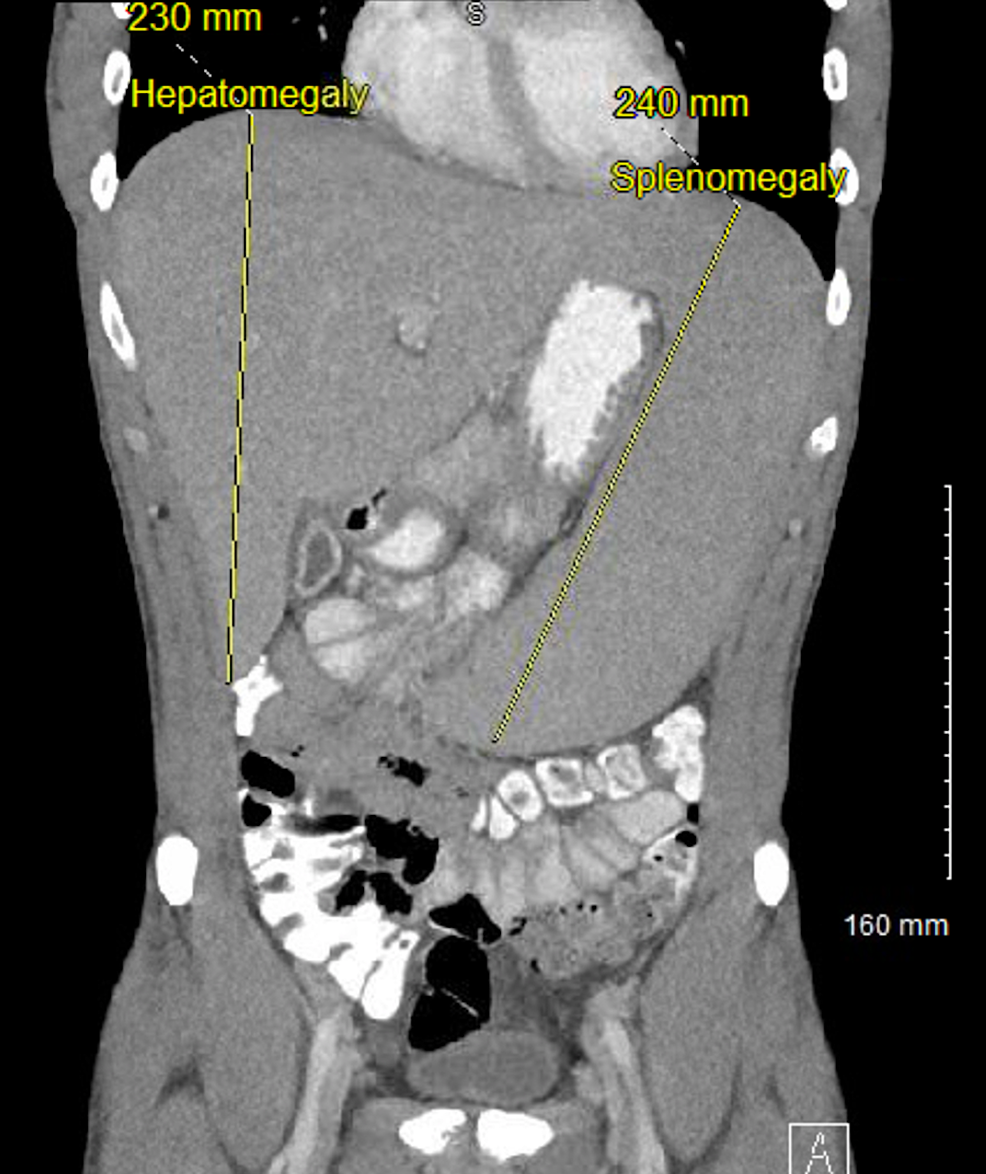 The patient was started on prednisone 1mg/kg daily for immunotherapy-induced hepatitis. Prednisone was increased to 2mg/kg on day 2 for worsening hyperbilirubinemia. The patient’s fever resolved 24 hours after starting steroids. Antibiotics were stopped (absence of infection). Liver enzymes also started to improve. Few days into admission, the patient started to develop neurological symptoms and after the aforementioned workup, he was diagnosed with encephalitis associated with HLH secondary to ipilimumab/nivolumab. Methylprednisolone was increased to 1 gram daily for three days with improvement in all neurological symptoms and the patient was discharged home on prednisone taper.

The patient’s fever settled a day after starting steroids and all neurological symptoms improved with high-dose IV methylprednisolone (1 gram daily for three days). Liver enzymes also started to improve, and he was discharged on prednisone 2 mg/kg daily. AST and bilirubin normalized after 10 days (Figure 3 and Figure 4). ALT also started to improve but plateaued (Figure 4). The patient was advised to continue prednisone 2 mg/kg daily till ALT level gets orderly. At eight weeks follow-up, ALT normalized, and prednisone was gradually tapered over the next four weeks. The patient had no new neurological symptoms throughout treatment. 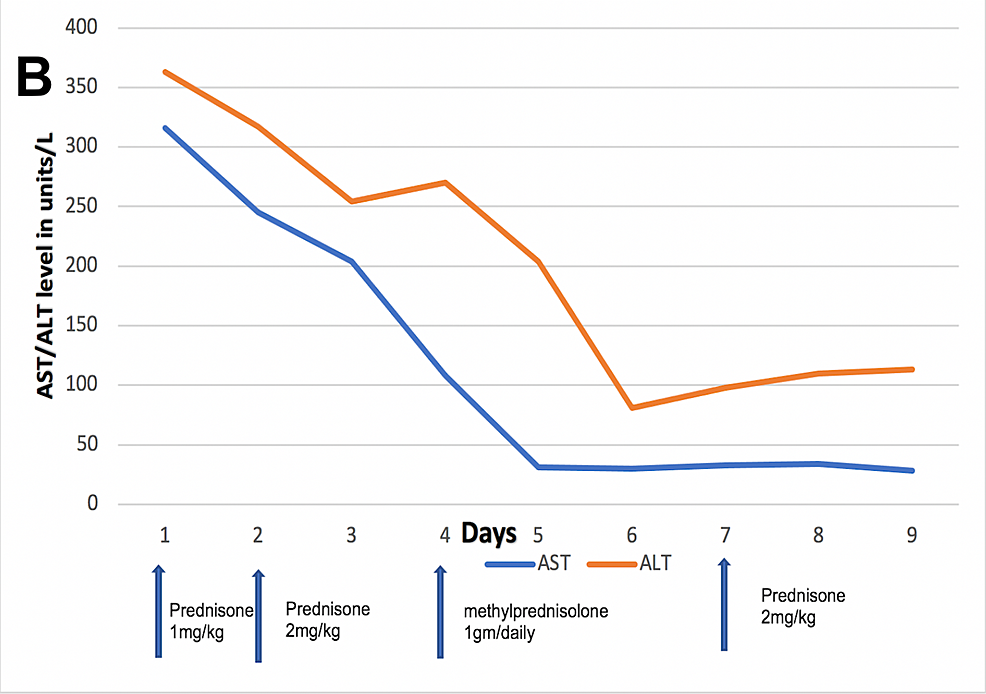 aSupportive criteria include neurologic symptoms, cerebrospinal pleocytosis, conjugated hyperbilirubinemia and transaminitis, hypoalbuminemia, hyponatremia, elevated D-dimers, and lactate dehydrogenase. The absence of hemophagocytosis (in the bone marrow) does not exclude a diagnosis of HLH

North American Consortium for Histiocytosis (NACHO) advocate against the terms "primary HLH" and "secondary HLH," owing to the fact that these terms cause confusion as both primary and secondary HLH can be activated by infections or other immune-related pathologies, and gene mutations can occur in any person regardless of age and family history [6]. NACHO prefers the following terminologies [6]:

HLH disease mimics - Other disorders that resemble HLH syndrome but are caused by other conditions and that would not benefit from immunosuppressive therapy or require entirely different treatments.

Pathophysiology of HLH comprises abnormal working of macrophages, natural killer cells (NK cells), cytotoxic lymphocytes (CTLs), and altered numbers of CD4 and CD8 lymphocyte subsets [7]. HLH induces organ failure because of tissue damage as an outcome of over activation of macrophages resulting in over secretion of cytokines. CTLs or NK cells are not able to remove activated macrophages leading to enhanced activity of macrophages and raised values of various cytokines such as interferon-gamma. HLH patients have diminished cytotoxic activity of CTLs and NK cells, associated with enhanced macrophage activation. This stimulated production of cytokines is considered a major perpetrator of tissue injury and multi-organ failure leading to high mortality [8-10].

The onset of an acute episode of HLH can trigger because of infection or modification in immune balance which can occur either due to immune activation or immune deficiency. Immune activation from an infection is a common trigger [11]. The immune checkpoint inhibitors can also cause immune activation and HLH, but the incidence has not been defined.

We found a total of 10 cases of ICI-associated HLH in malignant melanoma including nivolumab [12], pembrolizumab [5,13], combined pembrolizumab, and ipilimumab [14], combined ipilimumab and nivolumab [12,14-16]. Six of ten patients had no other immune-related toxicities while 4 others showed thyroiditis [16], hepatic cytolysis, lymphocytic meningitis, and colitis [14]. All 10 patients received steroids in the 0.5 to 2mg/kg range. Out of those, three were given extra immunosuppression, one with mycophenolate mofetil [16], and one with etoposide and tocilizumab [14], and the other with etoposide [14] (Table 2).

This is the first reported case of encephalitis associated with HLH secondary to combination ICI therapy in the setting of malignant melanoma treated with high dose methylprednisolone (1gm/daily for 3 days). HLH-associated encephalitis should be suspected in a patient exhibiting neurological symptoms other than HLH features, high-dose IV methylprednisolone 1gm/daily should be considered but further evidence is required.

© Copyright 2021
Ghous et al. This is an open access article distributed under the terms of the Creative Commons Attribution License CC-BY 4.0., which permits unrestricted use, distribution, and reproduction in any medium, provided the original author and source are credited.

aSupportive criteria include neurologic symptoms, cerebrospinal pleocytosis, conjugated hyperbilirubinemia and transaminitis, hypoalbuminemia, hyponatremia, elevated D-dimers, and lactate dehydrogenase. The absence of hemophagocytosis (in the bone marrow) does not exclude a diagnosis of HLH