Background: The novel coronavirus disease 2019 (COVID-19) is a global pandemic generated by the severe acute respiratory syndrome coronavirus 2 (SARS-CoV-2). The primary infection site is mucosal surfaces, mainly the lungs and the intestine, where epithelial cells can be infected. COVID-19 has spread throughout the world, causing millions of deaths and hundreds of millions of confirmed infections. Despite the global spread of SARS-CoV-2, there are extreme differences between countries in mortality rates and confirmed infections.

Methods: Pearson correlations and a t-test were performed on data from 137 countries in order to test the correlation between number of deaths from diarrheal diseases (pre-COVID-19 pandemic data) as a marker for countries’ sanitation level, and the number of confirmed COVID-19 cases and deaths per million.

Results: It was found that countries’ prevalence of confirmed COVID-19 cases and deaths per million are statistically correlated with their sanitation level.

Conclusions: The hypothesis proposed in this article is that the low mortality rates from COVID-19 in countries where the level of sanitation is low are due to fecal-oral infection of the population by SARS-CoV-2, rather than infection of the respiratory system. This hypothesis is supported by the protective effect of the low sanitation level presented in this work and the fact that lung infection by SARS-CoV-2 can cause severe pathology, while infection in the intestine generally causes minor or no symptoms.

SARS-CoV-2 enters cells via attachment of its spike protein to the angiotensin-converting enzyme (ACE2), which is particularly abundant on the epithelial cells of the lungs and the small intestine. This indicates that not only the respiratory system, but also the digestive system, are potential routes of infection [4].

Respiratory symptoms, including common cold, cough, shortness of breath, runny nose and sore throat, are the most common. However, nearly half of the patients who were confirmed as having COVID-19 exhibited detectable SARS-CoV-2 RNA in their fecal samples [5]. The characteristics of gastrointestinal symptoms in COVID-19, such as lack of appetite, diarrhea, vomiting, and abdominal pain, are more insidious than the respiratory symptoms and are easily overlooked. However, some patients might have only gastrointestinal symptoms during the entire course of this disease, and some continue to shed the virus in feces, despite testing negative for respiratory samples. It has been suggested that further investigation is necessary in order to determine whether these patients represent a potentially overlooked means of transmission of SARS-CoV-2 [6].

Despite the global spread of SARS-CoV-2, mortality rates differ greatly between countries, and range from less than one death to more than 1800 deaths per million confirmed COVID-19 cases [3]. Several explanations have been suggested for these differences in mortality rates between countries, including the differences in the vitamin D level of the population [7], the age distribution of the population [8], the degree of exposure to air pollution [9], the variability in genetic polymorphisms [10-11], the vaccination policy [12], the microbiome composition [13], and cross-immunity [14]. It is, therefore, reasonable to assume that the geographical variations in COVID-19 cases are multifactorial. However, some explanations were only partially supported by statistical evidence or dealt mainly with a limited geographical area and did not examine their hypothesis globally.

Since SARS-CoV-2 can be transmitted not only through the respiratory system, but also through the fecal-oral route, it was suggested that sanitation may be an important factor in preventing the COVID-19 pandemic [15]. The COVID-19 pandemic was suggested to be more serious in developing and least developed countries struggling with the problem of ineffective waste disposal, open defecation, poor sanitation, and limited access to clean drinking water [15-16]. Surprisingly, the death toll from COVID-19 in developing and least developed countries is extremely low [17]. The hypothesis examined in this work is that a lower level of COVID-19 cases and mortality occurs in countries with a low sanitation level.

Analysis of data from 134 countries was performed in order to test the correlation between the number of deaths from diarrheal diseases (pre-COVID-19 pandemic data) and the number of confirmed COVID-19 cases and mortality (Table 1). 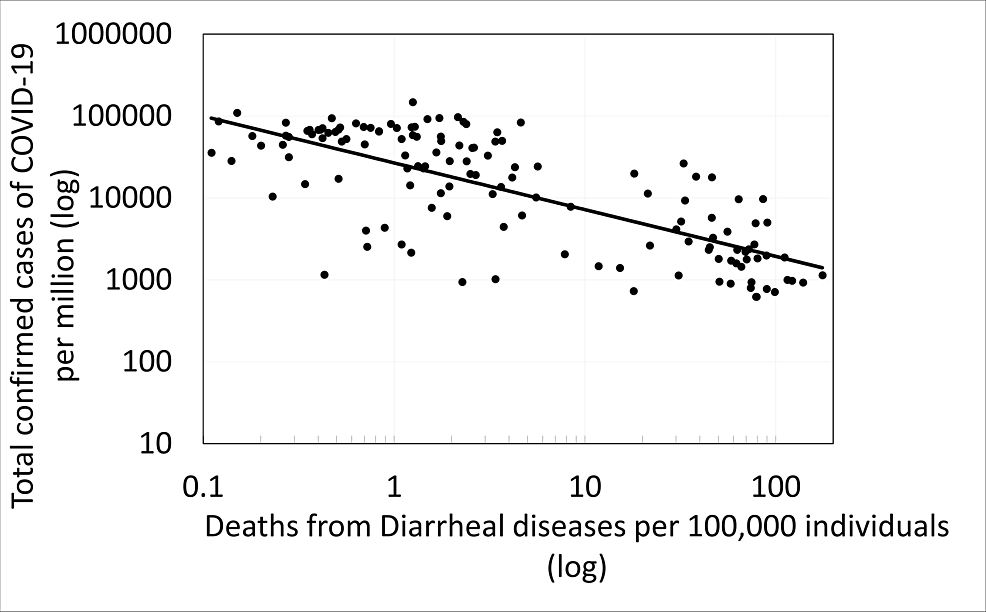 Figure 1: The correlation between the number of confirmed COVID-19 cases per million and the number of deaths from diarrheal diseases (pre-COVID-19 pandemic) per 100,000 individuals. 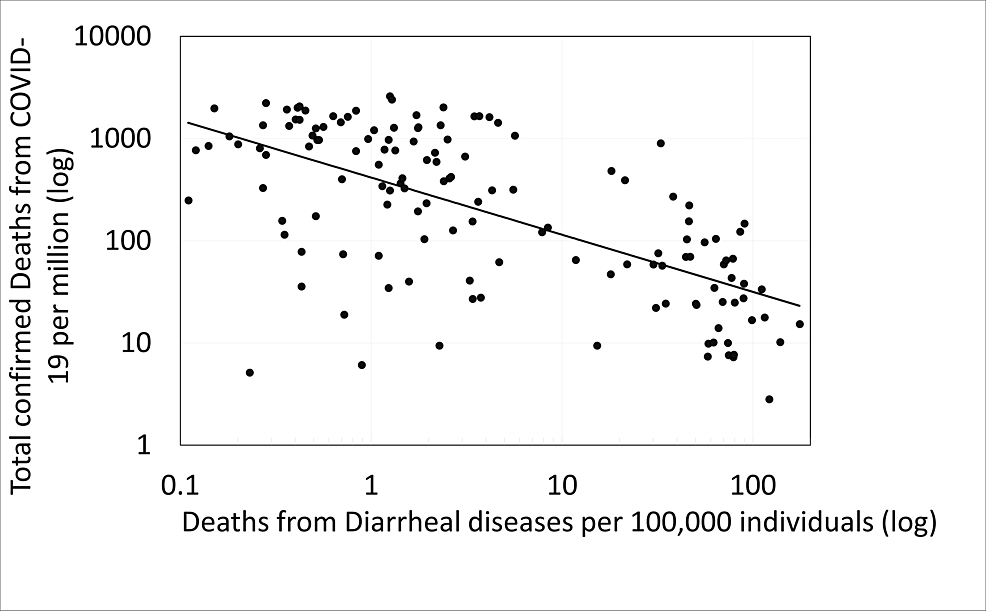 Figure 2: The correlation between the number of confirmed COVID-19 deaths per million and the number of deaths from diarrheal diseases (pre-COVID-19 pandemic) per 100,000 individuals. 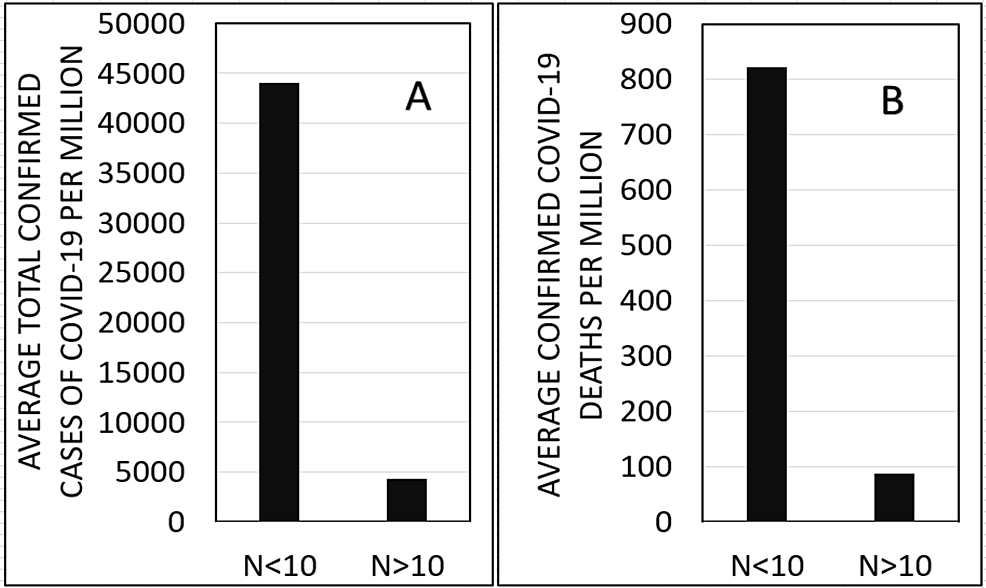 In this work, it is suggested that fecal-oral infection with SARS-CoV-2 is more common under low sanitation conditions than respiratory infection, and that a high proportion of those who are infected with the virus via the fecal-oral route are asymptomatic. The wide range of COVID-19 cases and mortality rates for countries with a good level of sanitation, as evident from the very small number of deaths from diarrheal diseases, indicates that factors other than sanitation level may affect the number of COVID-19 cases and mortality rates in the absence of the protective effect of a low level of sanitation.

This hypothesis is supported by the following finding: SARS-CoV-2 can cause severe pathology in the lungs driven by an exaggerated immune response, whereas infection in the intestine generally seems to cause minor or no symptoms [5, 18-19]. Nonetheless, the results of a meta-analysis of the prevalence and mortality of COVID-19 patients with gastrointestinal symptoms indicate that the mortality among patients with gastrointestinal symptoms is similar to the overall mortality [20]. Another meta-analysis found conflicting results and reported that diarrhea is associated with increased severity of disease for COVID-19 [21]. Since this meta-analysis data was obtained from patients of countries presenting a high level of sanitation, it is likely that in most cases, the initial site of infection of COVID-19 patients was the respiratory system and that the infection of the digestive system was a secondary event and therefore may not contribute to lowering the severity of the disease. The reduced mortality reported in patients with COVID-19 who present gastrointestinal symptoms may be linked to the absence of a pro-inflammatory response in the gastrointestinal tract despite detection of SARS-CoV-2 [19]. In addition, SARS-CoV-2 neutralization is more closely correlated with IgA than IgM or IgG in the first weeks after symptom onset [22]. Furthermore, in humans, intestinal IgA are mostly dimeric, and dimeric IgA was reported to be 15 times more potent against SARS-CoV-2 than IgA monomers [23-24]. Analysis of the structural component of the corona viruses family suggested that members of this group persist in the environment for a longer period and possess the highest fecal-oral components but relatively low respiratory transmission components [25]. Indeed, immunofluorescence and polymerase chain reaction (PCR) analyses of intestinal biopsies obtained from asymptomatic individuals at four months after the onset of COVID-19 revealed the persistence of SARS-CoV-2 nucleic acids and immunoreactivity in the small intestine of 7 out of 14 individuals [26].

The well-established Syrian hamster model was recently used to experimentally delineate the relative contribution of fomite and airborne transmission and to study the impact of the SARS-CoV-2 transmission route on disease severity [27]. SARS-CoV-2 disease severity and transmission efficiency were increased for airborne compared to fomite exposure in Syrian hamsters and fomite SARS-CoV-2 exposure displayed delayed replication kinetics in the respiratory tract and led to less severe lung pathology. Since fomite exposure partially resembles the fecal-oral route of exposure in that the virus is attached to particulate material, these reports support the hypotheses that the fecal-oral route of infection by SARS-CoV-2 results in decreased severity compared to primary infection of the respiratory system.

In order to further test this hypothesis, the populations of countries suffering from a low level of sanitation as well as a low level of COVID-19 cases and mortality must be tested for the presence of SARS-CoV-2 in both feces and nasal cavity samples, in addition to determining the blood antibodies composition. This will enable increasing the population’s exposure to COVID-19, the extent to which those infected with the disease are asymptomatic, and the prevalence of the fecal-oral infection pathway. Determining the SARS-CoV-2 viral RNA sequence in these countries for individuals suffering solely from gastrointestinal symptoms will allow clarification of whether there is a mutation that improves the effectiveness of the fecal-oral infection pathway. Because the microbiome is a key part of the intestinal mucosal barrier sites and plays a major role in shaping the immune system, it may also play an important role in infection by SARS-CoV-2 and subsequent immune responses [5, 13, 28]. It is therefore suggested that the intestinal microbiome of asymptomatic and symptomatic individuals should be analyzed and compared.

A new hypothesis, which can partially explain differences between countries regarding their confirmed COVID-19 cases and mortality rates, is proposed in this article. The proposed hypothesis is that the low confirmed number of COVID-19 cases and mortality rates found in countries with low levels of sanitation are due to fecal-oral infection of the population by SARS-CoV-2, rather than infection of the respiratory system.

Given that intestinal immune responses to infection with SARS-CoV-2 appear to be highly regulated, while those in the lung are exaggerated, understanding the similarities and differences between the two sites will help unravel the different immune responses in individuals suffering from mild and severe COVID-19 symptoms. This will enable better treatment of COVID-19 and the development of improved and more available vaccination techniques. This study highlights the need for developing oral vaccines which may present better immunity outcomes for the COVID-19 pandemic.

© Copyright 2021
Rothschild. This is an open access article distributed under the terms of the Creative Commons Attribution License CC-BY 4.0., which permits unrestricted use, distribution, and reproduction in any medium, provided the original author and source are credited.

Figure 1: The correlation between the number of confirmed COVID-19 cases per million and the number of deaths from diarrheal diseases (pre-COVID-19 pandemic) per 100,000 individuals.

Figure 2: The correlation between the number of confirmed COVID-19 deaths per million and the number of deaths from diarrheal diseases (pre-COVID-19 pandemic) per 100,000 individuals.