Mesenchymal tumors of the genitourinary tract account for 5% percent of bladder malignancies and there are currently 35 documented cases of osteosarcoma type. Concomitant involvement of the prostate in mesenchymal genitourinary malignancies is even rarer. Herein we describe a case of a 72-year-old male with a history of radiation for prostate cancer who develops hematuria. A hematuria evaluation revealed osteosarcoma of the bladder and prostate. He underwent radical cystoprostatectomy with ileal conduit and adjuvant chemotherapy. His disease progressed despite treatment and he elected palliative care 10 months after initial resection. This case reviews a rare histological variant of genitourinary malignancy.

Of extraskeletal osteosarcomas, those involving the genitourinary tract are rare and account for 0.04% and to date, there have been 35 documented cases [1]. The tumor presents with hematuria and has a 4:1 male to female predominance. Associated risks for osteosarcoma of the bladder include prior radiation therapy and a history of urinary schistosomiasis [2]. Previous reviews reveal an average age of onset of 62 years [3]. Mesenchymal neoplasms of the prostate are rare with few documented cases [4]. Mesenchymal neoplasms of the bladder account for 5% of bladder tumors [5].

Macroscopically, the tumor is characterized as large, polyploid, and infiltrative. When involving the bladder, the tumor often arises from the trigone [2]. Microscopically, it is characterized by arising from soft tissue not attached to bone or periosteum, with a uniform sarcomatous pattern, with osteoid or cartilage matrix [6]. Differential diagnosis includes sarcomatoid urothelial carcinoma and urothelial carcinoma with osseous metaplasia [2]. Histological staining for osteosarcoma is negative for pan-cytokeratin 7 and 20, epithelial membrane antigen, smooth muscle actin, desmin, CD34, and CD68. It strongly expresses vimentin and p53 [1]. Osteoid elements are present with mature lamellar structures, keratin, and desmosomes [2].

The prognosis for osteosarcoma is poor in comparison to other differential diagnoses with demise typically occurring within six months. A series examining 25 cases of vesical osteosarcoma found that 22 of the 25 were dead at six months [2]. Local recurrence is common (45%), as well as, distant metastases (65%), with the predominant metastases being pulmonary (81%) [6]. Treatment includes Bacille Calmette-Guerin for superficial malignancy and a combination of radical cystectomy, chemotherapy, and radiation for invasive tumors. Contributing factors to morality include continued local invasion, urinary obstruction, uremia, infection, and pulmonary metastasis [1]. Rare anecdotal cases report survival of 36-51 months with a combination of partial or radical cystectomy with chemotherapy [7].

A 72-year-old African American man with a history of prostate cancer treated 12 years prior with external beam radiation and brachytherapy presented with hematuria. His prostate-specific antigen (PSA) had been followed and found to be <0.01 without evidence of biochemical recurrence. Office cystoscopy revealed what was thought to be bladder calculi. Rigid cystoscopy revealed an obstructing calcified bladder mass that was resected. Pathology confirmed at the Cleveland Clinic revealed osteosarcoma of the bladder.

Pathology revealed osteosarcoma replacement to the prostate with extension into the bladder [Figure 1-3], and a single node positive for osteosarcoma. In addition, the gross specimen is seen with a tumor arising from the trigone [Figure 4]. 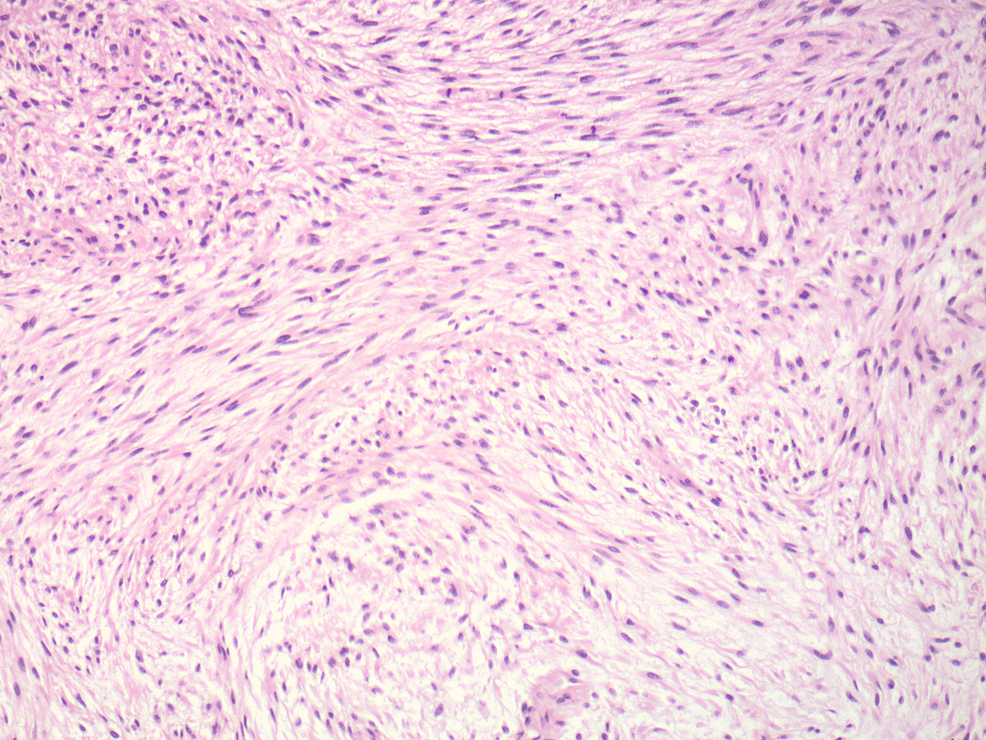 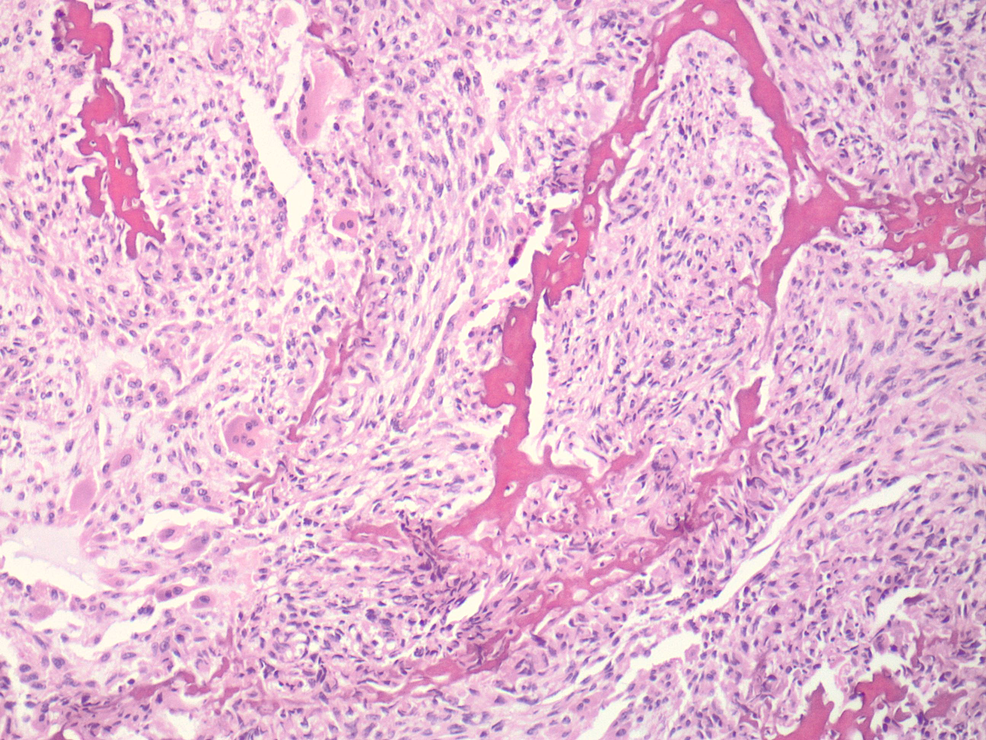 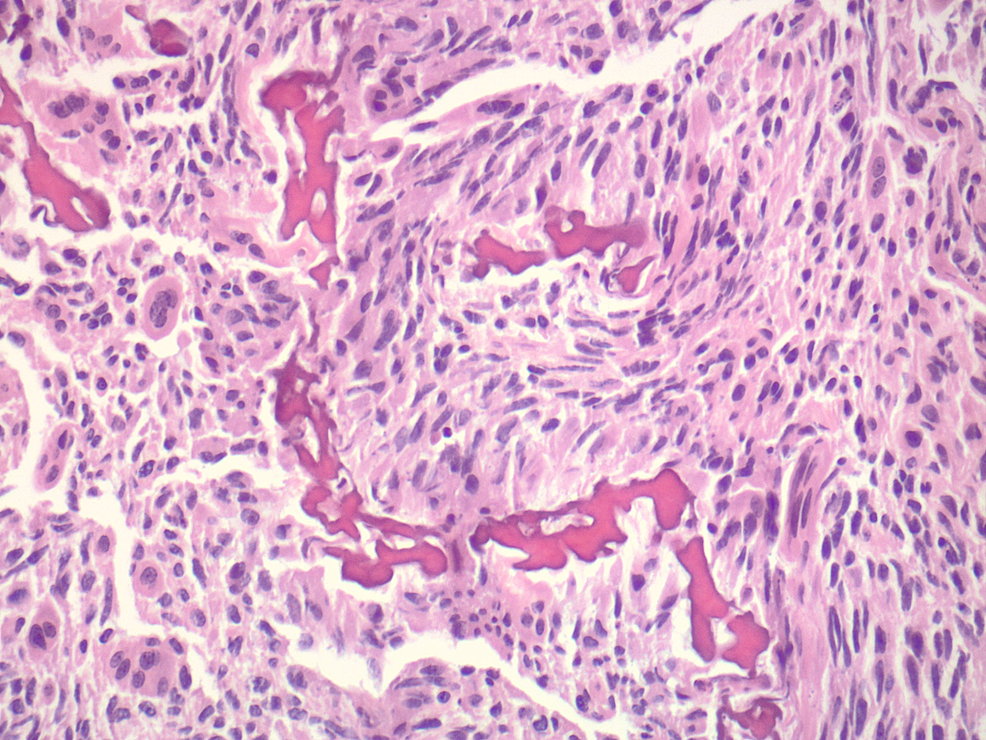 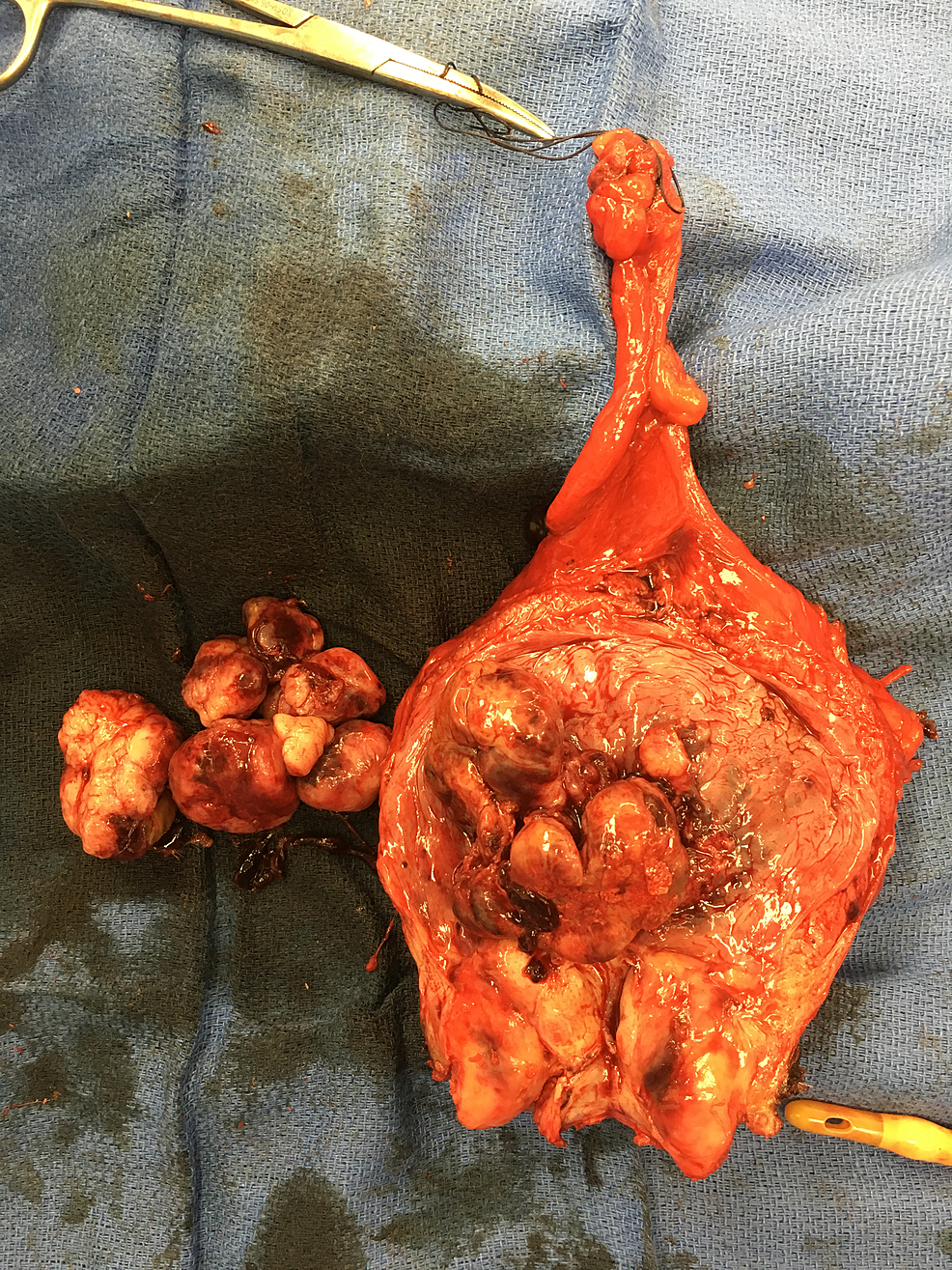 He experienced distant metastatic disease to the liver and bone three months following the cystoprostatectomy despite adjuvant chemotherapy. His prognosis was deemed poor and he chose palliative care 10 months after initial resection.

Development of sarcomas after prostate radiation is rare. A Surveillance, Epidemiology and End Result Database (SEER) analysis of men who had radiation therapy for prostate cancer showed that 38 of 51,584 developed sarcomas [9]. The relative risk of sarcoma development after radiation for prostate cancer was 1.21 compared to 1.02 of those treated surgically. Sarcoma is a class that includes types other than osteosarcoma, including leiomyosarcoma, fibrosarcoma, rhabdomyosarcoma, and malignant fibrous histiocytoma. Cha et al. found of radiation-induced sarcomas, survival at one, three, and five years if the sarcoma was resectable was 78%, 58%, and 41%, respectively, and a positive surgical margin after resection was associated with 27% five-year survival [10]. This data is not specific to osteosarcoma which highlights the need for more reportable cases of genitourinary osteosarcomas to provide outcome data.

Our case demonstrates variant histology associated with a rare sequela of radiation therapy. In addition, our institution had yet to encounter this histological variant. Outside evaluation with a national cancer center was necessary to confirm the diagnosis. Osteosarcoma of the prostate and bladder is rare. In this case, the disease progressed despite surgical and oncological treatment. Prostate cancer is a common disease treated with radiation. Rare secondary malignancies from prior radiation reveal a long-term sequela of radiation therapy. Our case highlights a need to counsel patients on the long-term potential adverse effects of radiation therapy for prostate cancer. Proper diagnosis histologically is imperative when confronted with variant pathology. Osteosarcoma portends a worse prognosis when compared to differential diagnoses of sarcomatoid urothelial carcinoma and urothelial carcinoma with osseous metaplasia. A multi-center, multi-disciplinary approach to the treatment of variant histology is essential for proper diagnosis and treatment.

© Copyright 2021
Rockmore et al. This is an open access article distributed under the terms of the Creative Commons Attribution License CC-BY 4.0., which permits unrestricted use, distribution, and reproduction in any medium, provided the original author and source are credited.