Background: Over 200 human telomerase reverse transcriptase (hTERT) polymorphism combinations have been implicated in the development of cancer. This study aimed to evaluate hTERT mutations in meningioma tissue and its association with meningioma.

Material and Methods: A total of 90 patients who underwent surgery between 2006 and 2015 and were histopathologically diagnosed with meningioma (WHO 2016) were included.

Meningiomas, one of the common central nervous system (CNS) tumors that account for 30% of all intracranial tumors, originate from arachnoidal cap cells along the dura mater, generally progress slowly, and are mostly benign [1]. These tumors have been classified into three groups by the World Health Organization (WHO). Among the meningiomas with a documented WHO grade, 81.1% are grade I (typical), 16.9% are grade II (atypical), and 1.7% are grade III (anaplastic) [2]. Some of the meningiomas have higher relapse rates and a more aggressive clinical course. According to histological grade, WHO grade I, II, and III tumors have a recurrence risk of 7%-25%, 29%-59%, and 60%-94%, respectively [3]. Therefore, both histopathological grading and cytological evaluations are important. Surgery is usually the first treatment option, but radiosurgery may become the first option in meningiomas that are deeply located and invade the vascular and neuronal structures [4].

Meningiomas can be caused by both internal and external factors. External factors include radiation, head injuries, and viruses, whereas internal factors comprise hormones and genetic predisposition. Evidence has shown that dysfunctions in specific genes may play a role in the formation of meningiomas. Tumor formation can be caused by the inactivation of tumor suppressor genes and overexpression of oncogenes. Apart from chromosome 22 deletions, which are the most common abnormality detected in meningiomas, losses in chromosomes 1p, 3p, 6q, 10q, and 14q have been found especially in atypical and malignant meningiomas [5,6]. Moreover, recent studies have shown that miRNA21-107 is closely related to grade changes, while MIR17HG is closely related to recurrence [7,8]. These genetic parameters have been proven useful as markers for tumor grade and recurrence. The primary aim of the aforementioned studies, especially those on atypical, malignant, and recurrent meningiomas, is to obtain information regarding appropriate treatment protocols and the course of the disease.

Telomerase reverse transcriptase (TERT; hTERT in humans) is an important catalytic subunit of the telomerase enzyme complex, together with the telomerase RNA component [9]. The hTERT gene consists of 16 exons and 15 introns on chromosome 5. The hTERT promoter is rich in GC and lacks the TATA and CAAT boxes but contains positions for many transcription factors, indicating high levels of regulation by multiple factors across many cellular components [10].

Studies on the hTERT gene have focused on its mutation and relationship with the risk of cancer. Over 200 hTERT polymorphism combinations have been implicated in the development of cancer [11], while hTERT regulation has been investigated to determine the potential mechanisms of telomerase activation in cancer cells. Moreover, glycogen synthase kinase 3 (GSK3) seems to be overexpressed in most of the cancer cells [12]. The current study aimed to evaluate hTERT mutation in meningioma tissue and determine its association with meningioma.

Between 2006 and 2015, 90 patients who underwent surgery at the neurosurgery clinic of the University of Health Sciences, Sisli Hamidiye Training and Research Hospital and were histopathologically diagnosed with meningioma were included herein. Sociodemographic data and clinical characteristics of the patients were recorded. Pathologic classification was made according to the WHO 2016 system. This study was approved by the ethics committee of Şişli Hamidiye Training and Research Hospital. All human data used herein were collected according to the principles of the aforementioned ethics committee. Informed consent was obtained from each patient before study participation.

A total of 110 tumor tissues from 90 patients were used to create paraffin blocks. Thereafter, paraffin blocks were sectioned at a thickness of 4 µm on the slide and incubated at 60 °C for 45-60 min until the paraffin on the slide melted. The sections were then placed into the LEICA Bond Max device and stained.

The hTERT index was assessed using an image analyzer (Lucia 32G/Mutech; Nikon, Japan) in 10 fields (×20 lens) and semi-quantitatively graded for anti-TERT antigen through immunohistochemical staining expressed as the percentage of positive cells. All patients were classified into five different groups according to the presence and percentage of hTERT-labeled cells. A zero positive value was given when no stained cell was present. Moreover, a staining rate of 1%-10% was evaluated as one-positive; 11%-30% as two-positive, 31%-60% as three-positive, and 61% and more as four-positive [13]. This study examined the presence of anti-hTERT antigen in immunohistochemical staining (Figures 1A-1D). 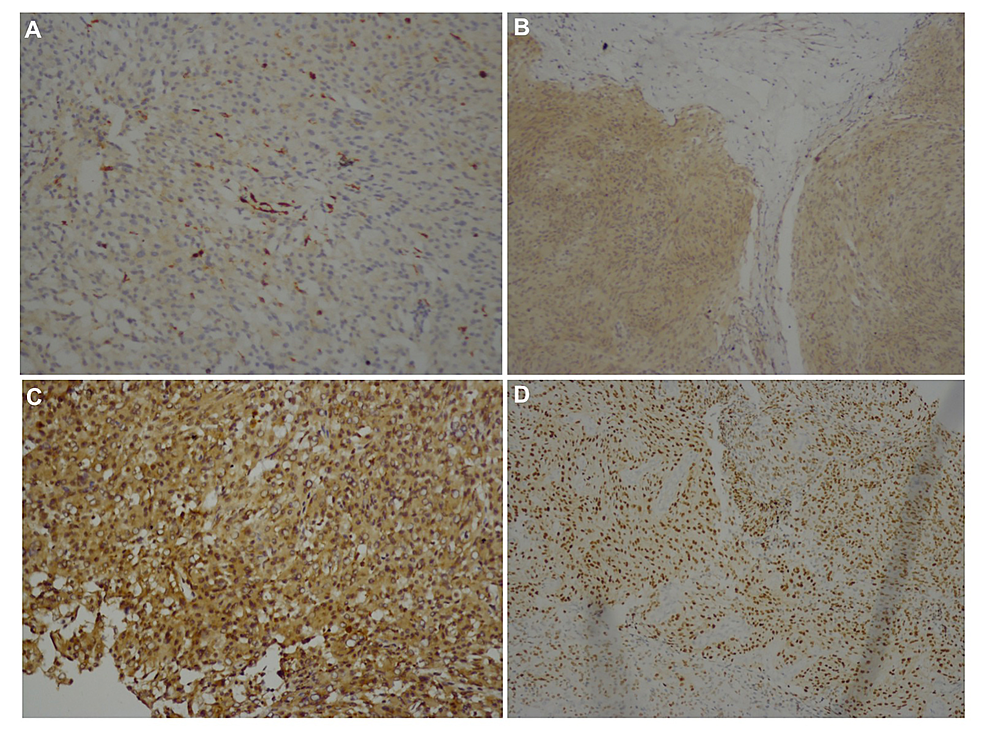 Figure 1: The presence of anti-hTERT antigen in immunohistochemical staining

All statistical analyses were performed using SPSS version 11 software (SPSS Inc., Chicago, IL, USA). The normality of the variable distribution was examined using visual and analytical methods (Kolmogorov-Smirnov/Shapiro-Wilk tests). Normally distributed descriptive variables were presented as means and standard deviations. Parameters in 2 × 2 cross-tabulations were compared using the Pearson, chi-square, and Fisher exact tests. Bonferroni correction and post-hoc analyses were performed in more than 2 × 2 tabulations. A 5% overall probability for a type I error was used to determine statistical significance.

Table 1: Characteristic features of the 90 patients who underwent surgical decompression for meningioma treatment

Telomerases are a different subgroup of RNA-dependent polymerases. The enzyme, which uses the RNA it carries as a template and ensures the preservation of telomere ends shortened by every division, adds telomeric DNA sequences to the ends of linear chromosomes. Given that DNA polymerases cannot initiate new DNA synthesis at the 3′ prime in the main chain, the length of a chromosome is shortened after each DNA doubling. Telomerases address this prime replication problem by inserting telomeric repeat sequences at the 3′ prime of the chromosome, consequently hindering the shortening of the chromosome [14]. Given the small number of telomerases in somatic cells, a typical cell shortens its telomere length by about 100 base pairs at each division. This telomere shortening gradually leads to the cessation of the cellular division [9]. As such, the majority of the molecular genetic studies being performed today aim at addressing “telomere-induced cell aging.” TERT is an important catalytic subunit of the telomerase enzyme complex, together with the telomerase RNA component [9]. In particular, TERT functions to catalyze the incorporation of TTAGGG nucleotides into telomeres on chromosomal ends [14]. As reported in cell culture studies, hTERT renders normal cells immortal by offering the self-renewal property of stem cells to other cells [15]. Moreover, studies haves shown that hTERT overexpression is often associated with cancers and tumor formation [16]. Research regarding the hTERT gene has focused on its mutation and relationship with the risk of cancer. Over 200 polymorphism combinations of hTERT have been found to be involved in cancer development [11]. Moreover, studies have investigated hTERT regulation to determine possible mechanisms of telomerase activation in cancer cells. Evidence has shown that GSK3 appears to be overexpressed in most cancer cells and that leptin increases the mRNA expression of hTERT through signal transducer and activators of transcription 3, suggesting a mechanism for an increased incidence of cancer in obese individuals [12]. Together with CTNNB1 mutations, hTERT mutations have been shown to be associated with hepatocellular carcinomas and adenomas [17]. Studies investigating the potential involvement of hTERT mutations in malignant transformation have suggested an association between hTERT mutations and meningioma. Similarly, TERT promoter mutations have been detected in low-grade tumors, suggesting that TERT promoter mutations may occur early during tumor development, may play a role in the formation of meningiomas predisposes to malignant progression, and may promote the survival of cells with chromosomal imbalances [18]. Nevertheless, insufficient data have been available on the effects of hTERT mutations on meningioma prognosis, except for those reported in high-grade and recurrent meningiomas. The current study found a moderate positive correlation between the Ki-67 score and the presence of hTERT mutation, which may explain the transformation of low-grade meningiomas. 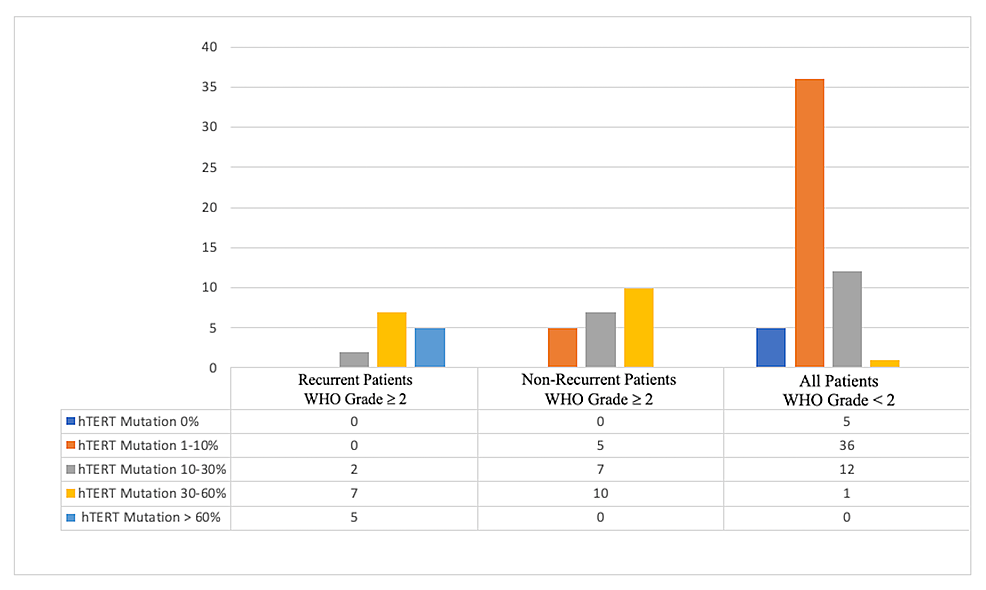 A study published in 2015 by Abedalthagafi et al. suggested that hTERT mutations and its subtypes could provide new insights into intra-tumoral heterogeneity in the pathways of malignant progression and into the evolution of malignant phenotypes in anaplastic meningiomas [22]. The findings obtained in the current study are consistent with those presented in the literature and support available data.

Our study has several limitations word noting. First, hTERT mutation was evaluated through immunohistochemistry. Moreover, our data could be regarded as less reliable than DNA or RNA analysis given that hTERT antigen staining is a semiquantitative assessment that is expressed in percentages. Considering that our study did not feature a healthy control group, hTERT mutation was compared using several independent variables, including histopathologic grade in particular.

The current study showed that the presence of hTERT mutations in addition to high Ki-67 suggests a more aggressive meningioma course and potentially increased risk of recurrence. As such, more aggressive surgical strategies and early adjuvant radiotherapy may be required. We believe that hTERT mutations will become an important biomarker that could significantly impact our clinical approach to the planning and management of meningiomas, which needs to be confirmed by further studies.

This article had been submitted as an oral presentation for the 32th Scientific Congress of Turkish Neurosurgical Society that held in April 2018 in Antalya, Turkey.

© Copyright 2021
Sahin et al. This is an open access article distributed under the terms of the Creative Commons Attribution License CC-BY 4.0., which permits unrestricted use, distribution, and reproduction in any medium, provided the original author and source are credited.

Figure 1: The presence of anti-hTERT antigen in immunohistochemical staining

Table 1: Characteristic features of the 90 patients who underwent surgical decompression for meningioma treatment